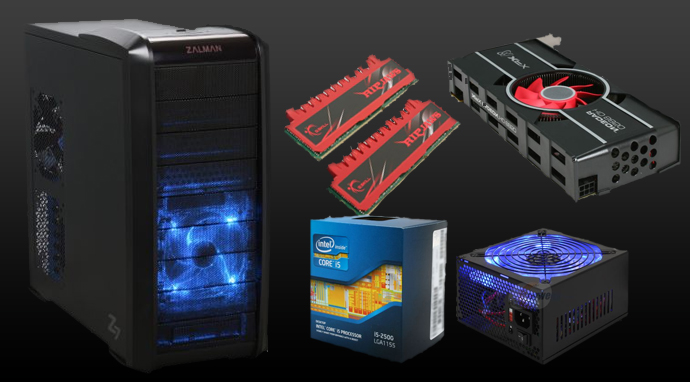 Having seen some amazing hardware at PAX East 2011, most of which we are still writing about (expect some case reviews and 3D technology information soon, too!), this PC build was much, much easier to plan. We actually revised the build post-PAX to implement some of the new products we heard about.

This article won't get very technical, but our upcoming posts about Zalman, ZOTAC, ASUS, Cooler Master, and nVidia will certainly cover any of that deeper stuff for you. Zalman showed us their newest Z-series cases, each priced extremely competitively while still maintaining a sleek, gamer-esque look. The Z-series cases have a big fan capacity, and as such, will definitely keep our budget builds nice and cool.

This build runs slightly over our intended target of $800, but it's worth it -- we promise. This system will keep you running for at least four or five years, if not more (a video card change will be the most likely upgrade candidate). Our last build was around $484, so if you need something cheaper, go check that one out. We have lots of alternatives listed in this build, so be sure to read thoroughly for chances to decrease your cost or increase your performance.

XFX has been a solid contender in the GPU market for several years now; their RADEON HD 6850 with 1GB of GDDR5 memory and the maximum push-capacity for the price (256-bit memory interface) beats out anything else priced comparatively in the benchmarks, especially power-wise. This card is one of the newest middle-end cards on the market, you can't go wrong with it.

Alternative: Photoshop #D modelers/renderers should use nVidia, the Adobe-supported vendor. If that's you, check out the $160 ASUS GTX 550 1GB card with a 192-bit interface.

The most impressive single component in this build is undoubtedly the CPU/Motherboard combo. We went with an Intel i5 Sandy Bridge quad-core processor (one of the most discussed CPUs among hardware vendors -- to include Zotac and nVidia -- at PAX East) clocked in at 3.3GHz with the option of upping it to 3.7 GHz (see below alternative). The CPU has 256 KB of L2 cache on each core and 6MB of L3 cache; a lot of modern games are opting to off-load the GPU's processes onto the CPU to increase efficiency, making the CPU one of the most important component selections in your build (the video card ranking second most important). Don't skimp.

Alternative: If you have extra money laying around, the first upgrade you should make is the CPU cooler. There are a lot of options, some at around $50, but the best of the currently released Zalman products is this $80 cooler. That will make sure your CPU can run at 3.7GHz without, you know, melting.

G.SKILL has seen an increase of use in our builds lately due to their cost-effectiveness in the mid-high level memory market. We chose to use 8GB of Ripjaws X Series DDR3 PC3 12800 memory (2x4GB). The timings and latency are nothing spectacular, but the stock heatsink means you won't be required to make any changes to those; it's also 8GB of RAM. It's awesome. And only $100.

Alternative: If you feel crunched for money, you can decrease the cost of your build $50 by using the $50 4GB version of the same memory.

Although we normally don't go with a Micro ATX board, this one was too good to pass up; especially considering the amount of attention Micro ATX boards received at PAX East. The board support Turbo Boost technology and the Core i5, so you can absolutely boost your CPU to the advertised 3.7GHz (you might want to ensure proper cooling first, though). The motherboard will only fit 4x240pin memory modules, but our memory selected above is served in 4GB sticks. The motherboard supports just about any memory standard you can throw at it in this price range, spanning from 1066 to 2200 (with some footnotes, see their specs for that). The motherboard will has two PCI-e x16 slots, supports SATA 6Gb/s hard drives (ooh, fancy), and has a nice array of RAID support (0, 1, 5, 10) for future expansion. The board has 6x USB 2.0 ports and 2x USB 3.0 ports, and we suspect that 3.0 will make a big emergence in the coming 18 months. The audio isn't anything more than standard, so you may need an audio card if you're the kind of person who requires perfect sound.

We admit it, costs had to be slashed somewhere -- while we absolutely did not skimp on the power supply, we chose the cheapest-but-most-effective one possible for this build. The RAIDMAX Hybrid is a 730W PSU with enough power connectors for all your initial peripherals. The PSU is currently $60 with a free copy of 300 (apparently valued at $4, woo-hoo!).

Alternative: After upgrading your CPU heatsink, you might consider this very high-end alternative for $100. Warning: you're getting into rich people territory and it is recommended that you purchase a monocle alongside this PSU.

Finally! We've moved away from that $50 WD hard drive! This time we went with a Western Digital Caviar Black HDD with a massive 1TB of space, 64MB of cache, a standard 7200 RPM, and best of all, it's a SATA 6Gb/s drive. Yes. Excellence. We recommend you partition this drive into chunks - depending on OS, give about 40GB to the primary partition (don't forget to move your 'users' folder to a larger drive, games install in users).

Alternative: If you're looking to spend a bit less on a hard drive, you can go for this $65 slightly less impressive version of the drive, coming in a close second at 640GB / 7200 RPM / 32MB cache.

Optical drives are boring. They read discs. They burn discs. Unless you're going into Blu-Ray territory, there's nothing special here. Move along.

As discussed above, Zalman is really pulling ahead in case design this year. The Zalman Z7 comes with two fans initially, but has room for more. The case will easily fit the Micro ATX board, and shouldn't have a problem fitting any behemoth video cards you stick into it. If you want more cooling, stick an extra 2x $13 fans on there.

Alternatives: Got an extra $10? Go with the Zalman Z9 instead. It has beautiful interior construction and great airflow -- also, that design is sexy.

So what do you guys think? I feel like this is our best build yet. We consulted a lot of engineers on this one, so it's certainly got a touch of awesome that previous builds did not feature. We'll be revisiting the popular $500-range build within a few weeks to a month if you can't quite afford this one; however, it is our highest recommendation that you simply save up to buy this. Remember: don't feel loyal to any single distributor. Use Amazon, Newegg, TigerDirect, Fry's, CompUSA, and BestBuy to ensure you get the best prices on each component. Don't forget about those nasty shipping costs either, especially on cases (hence the Amazon decision for the Z7).