PC gaming continues to outgrow console markets with each year (Steam's usage of 780 Petabytes of bandwidth proves this), and as such, we have evermore users interested in learning how to build a gaming computer on a budget. Short of providing guides (like the one I just linked), our PC build lists make things quite easy to configure and we aim to make the process as fun and informative as possible.

Having just completed our $3189 ultimate game development rig (more of a "for funsies" build, really), it seemed appropriate to put together another cheap gaming PC. This build targets those with around $550 to spend, though you could certainly spend more or less as your budget allows. If you have around $700 to spend, it may be worth your time to check our $679 i5-2500 build.

This system is built entirely for gaming. It uses a hyperthreaded, dual-core i3-2120 (AMD fans: don't send me your rage email quite yet) that is optimized for in-game performance. AMD plays a game of cores and numbers, but the simple fact is that more cores does not necessarily equate better gaming performance. Many games are still dual- or quad-threaded applications and do not run on more than 2-to-4 threads efficiently. As the i3-2120 is hyperthreaded, it will run four threads while providing the best caching setup and architecture on the market. AMD might have cores in this instance - and they absolutely provide excellent hardware for an ultra-budgeted PC - but AMD's Phenom 960T simply can't compete with Intel's Sandy Bridge architecture on the gaming front (benchmarks by X-bit Labs here).

Enough talking. Let's get into the build.

The 6850 has remained our preferred budget gaming video card for a few months now, and until the market is substantially jolted by this year's hardware releases, the 6850 will retain its dominance in this budget.

We've combined the 6850 with 8GB of RAM (combo here) to give you a not insubstantial $8 discount. Aside from coming with a free copy of DiRT3, the 6850 is comfortably packed with 1GB of memory, operates at a core clock speed of 775MHz (view our GPU Dictionary to understand what these mean), and will effortlessly play most modern games on high settings. Games like Battlefield 3 will require something a bit stronger, but the 6850 will still handle it on medium (possibly a hybrid of medium-high).

Prefer NVIDIA? Need to save $10? While the AMD 6850 tends to outperform the 550 Ti in most gaming applications, there are times when an nVidia card is preferential. Our AMD vs. nVidia guide will help you make that choice. If you feel an nVidia card is right for you, try the 550 Ti. 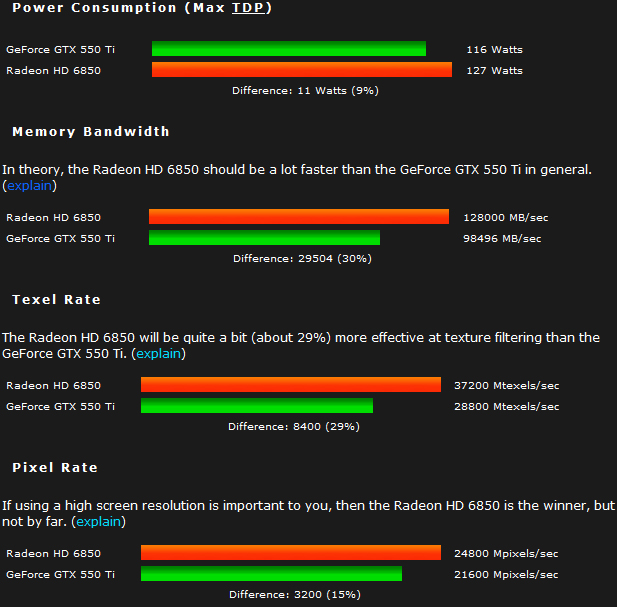 Here's where it gets interesting! We have historically used AMD X3 CPUs (~$80) in our "Cheap Bastard" builds and ultra-budget builds, but in the spirit of doing something different and exploring Intel's oft-neglected "low-end" CPUs, we opted for an i3-2120 and a P67 motherboard.

So what's the real difference? Well, the X3 CPUs are definitely cheap... the more competitively priced AMD 960T, though, is a bit closer to what we're using here. Let's stick to comparing those. The 960T has four true, physical cores and operates at 3.0GHz, has 6MB of L3 Cache, and generally average settings for the rest. It's a respectable CPU, to be sure. Intel's i3 route gives us two physical cores and four logical threads (it effectively simulates additional cores within a software environment, but it's a bit more complex than that, of course), 3.3GHz operating frequency, 3MB of L3 Cache, and Sandy Bridge architecture. 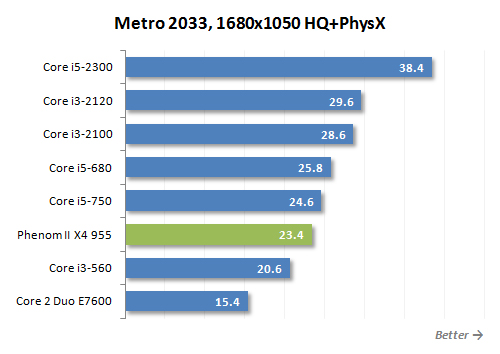 The Sandy Bridge architecture is key, here: it provides integrated execution cores, memory controllers, and an integrated graphics chip, all of which decrease physical travel distance and increase efficiency. Since most games tend to operate at peak efficiency on two-to-four logical threads, the sacrifice of two physical cores is negligible for a gaming rig.

The argument of "future-proofing" for games that will inevitably run on more cores is the most common defense of AMD's approach, but the simple fact is this: By the time the majority of games are running on 4, 6, or even 8 threads, you're going to be building a completely new system. RAM will change. GPU technology will change. Everything will change in that span of several years, so there's honestly no point in attempting to future-proof on a CPU-level. Perhaps a motherboard, but not a CPU. Technology simply changes too much to predict future software directions.

We combined the CPU with an optical drive for a cool $10 discount, which you can find here.

CPU debates can get complex rather quickly, but memory is much more straight forward in the modern era. As previously mentioned, we combined this Corsair XMS3 8GB of memory with the video card for maximum price efficiency.

With its sleek-and-discreet style, the XMS3 memory clocks a respectable 1333MHz and runs smoothly on its standard 9-9-9-24 timings. If you're comfortable with it, consider overclocking the memory to 1600MHz when your system is confirmed to be stable.

Make sure you use a 64-bit OS with this memory.

MSI has worked hard to make itself known as a gaming brand and is second - perhaps - only to ASUS. The motherboard isn't a fancy Z68 board, but the advantages of Z68 architecture are primarily noticeably in enthusiast builds (~$750+) and will not ever be appreciated in a budget build like this one.

The board natively supports 1333MHz memory but will allow overclocking from 1600MHz (recommended) all the way to 2133MHz (be careful...). The board does have two PCI-e 2.0 slots (x16, x8), but don't plan to run multiple video cards in it. You get 2xSATA III (6Gb/s) ports and 4xSATA II (3Gb/s), but save the 6Gb/s SATA III ports for any SSDs you may acquire in the future. A normal HDD will not utilize the bandwidth of a SATA III port.

You're covered with this board -- it has a solid BIOS and a good track record.

Want More? For $40 extra (with a $30 rebate), you can get MSI's P67A-GD53 B3 "Military Class" motherboard, which comes with OC Genie and UEFI BIOS, as well as SLI support. It's an excellent buy if you can afford the initial investment. After rebates come in, it's only $15 more than the above P67A-G45 B3 board.

Before I forget: Use the promo code "EMCNHNC47" (no quotes) at checkout to get $10 off this PSU.

Corsair's "Builder Series" 600W PSU is currently on sale for $60 after the $10 instant promo code, and is then dropped down to $30 after the MIR. For 600W, that's an incredible price - especially since Corsair's CX line is known for general stability and reliability. Any other PSU in this range is more than shaky, but this one should serve you well.

600W is more than enough for the hardware we have here, as well as any future add-ons. If you opted to get the P67A-GD53 motherboard instead and would like SLI compatibility, ensure you get a PSU with enough power (comment below or write on our forums for help).

Combined with the CPU, LG's basic optical drive will - you know - run discs, and stuff. It'll burn them, too. Yeah, fancy. You'll be the talk of the town with those advanced features!

Despite searching tirelessly for a more unique case, the HAF 912 returned as the best possible contender in the $50 price range. Cases are a matter of personal taste and cooling ability. If you've read our guide on case fan theory, you know that we recommend a minimum of 3 fans (of sizes 120mm or greater) for a budget gaming system. For that reason, we included an additional 140mm side fan (set it to intake) for free with this case.

It's spacious, cool, and affordable. That's really all that matters.

Feel adventurous? Consider the Zalman Z9 Plus on Micro Center (no need for additional fans).

It's a good rig, right? Comment below if you require customization assistance or, for more in-depth and responsive help, consider our hardware forums.