Miniaturized gaming PCs feel like something out of the Small World ride -- AMD's Trinity, Llano, and APU lines and Intel's IGPs make for perfect HTPC processors that double as lite-gaming options (see our $475 AMD miniature build here). IGPs still don't come close to the level of detail that a gaming-grade dedicated GPU can output, but they're still nothing to scoff at: Intel's HD 4000 integration in the latest line of Ivy Bridge CPUs (which we compared here) is capable of playing many popular games -- Skyrim, SC2, and BF3 (albeit on low graphics) included -- on medium settings at reasonable resolutions.

This ultra small gaming and media [HT]PC (the theater part is optional) is for all those who have small spaces for PCs or are only gaming lightly, with more of a focus on entertainment media. If you're looking for a cheaper gaming-dedicated PC, check out our $558 budget system list.

So this one's small, powerful for multimedia, and can play most mainstream games on medium settings (or thereabouts) at 1680x1050 resolution, though it is possible to play on higher resolutions with sufficient tweaking.

Quick note: If you'd like to work on an ultra-small PC that is truly built for hardcore gaming, the MicroATX route is a better bet -- this one uses Mini-ITX form factor components, so it's unfortunately not very affordable to cram gaming-grade video cards in there (though it is possible with low-profile cards). If you're interested in making a system that's of slightly-larger size, post below and we'll work on a MicroATX option with you.

Let's look at the build list for this tiny gaming PC.

Intel's Core i5-3570k may not be hyperthreaded, but it does everything we need it to do in a media and lite-gaming PC. The 3rd Gen processor utilizes Intel's HD 4000 IGP technology, which Anandtech benchmarked here (graphic below) as heavily competitive with AMD's HD 6550D included in their Llano APU line. 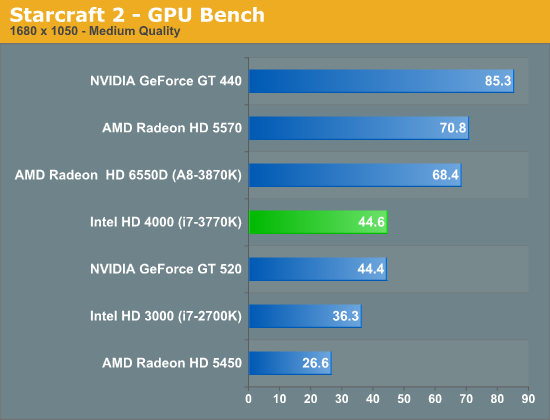 AMD's integrated graphics may be stronger, but Intel's CPU offerings have never been better. For anyone performing encoding, transcoding, ripping, or dealing extensively with blu-ray media, Intel's option will perform stronger in most aspects due to its nature as a mid-range desktop CPU.

Keeping everything as small as possible in this build is important -- it's a pain to deal with oversized heatsinks in these tiny cases (where even half-an-inch can be the difference between disassembly and quick upgrades), so we opted for Kingston's HyperX Blu memory. These sticks make for nice HTPC RAM, coming with 8GB in 2x4GB fashion, clocked in at 1600MHz and offering full compatibility with the motherboard.

ASRock's tiny Z77E-ITX motherboard -- which is the mini-ITX form factor that we're looking for -- runs on Intel's newest Z77 chipset and is fully compatible with the chosen CPU's featureset, maximizing our use of the new processor. The motherboard natively supports 1600MHz memory (so the above RAM will clock down initially), but can be overclocked all the way up to 2800MHz, with steps in between.

Everything else is fairly standard -- there are only two RAM slots due to the size of the board, but that's enough for our 2x4GB sticks. It also comes with 1xPCI-e 3.0 x16 slot in the event an optional video card is plugged in for more fruitful high-end gaming.

Finally, we have a mini-PCI-e slot that is ready for any wireless modules you throw at it, so if wireless is preferable, you have the option to use it.

Making loading screens non-existent is always a nice bonus of SSDs, but so is ultra-fast storage for any multimedia or video transfers. Corsair's Force-series SSDs are reliable, fast (510MB/s sequential write, 85,000 IOPS 4KB random write), and affordable - at almost $1 per gig. This drive is equipped with 120GB of storage to get you started, though we recommend only placing your most heavily-used applications, games, or files on here (including the OS), and then offloading the rest to a storage HDD.

You can read more about SSD specs and functionality in our SSD Dictionary.

Optical drives have been dying a slow death for a number of years on gaming machines, but as this system is something that has nice fusion with TVs and living room environments, we've included an external blu-ray reader, perfect for the few times it gets used or, of course, BD playback. Nothing too special.

Silverstone's SG08 mini-ITX tiny case can fit a full-length video card and is per-packed with a 600W PSU (80+ bronze, so nothing amazing); you do pay for the small size of the case and its ability to fit a full-length VGA (a rare feature in mini-ITX territory), but if small is what you're after, it's worth it. For those who plan to never add a dedicated GPU, the Silverstone SG05 is plenty for your needs and is a bit cheaper.

The whole thing measures 8.7" x 7.5" x 13.8" and successfully answers any concerns of cooling by fitting in a 180mm fan on the top (complete with filter).

For when Intel's HD 4000 isn't powerful enough, a dedicated video card can kick in and burn through some gaming. The HD 4000 should run games like Skyrim on medium settings at 16x10 resolution, but for high/ultra settings and higher resolutions, we recommend anything from the 6850 and higher.

We'll go with the 6870 for this build since it is leaning toward the upper-budget range, and XFX's current deal on their 6870 is too good to pass up: For $150 after rebate, we get a card that can play most games thrown at it on high settings, with the exception of a rare few (Metro may be one of them).

For an ultra small build of this price, we end up with a strong gaming box that has options to expand to proper video cards in the future and serves as the perfect "tight space" or living room PC gaming rig. If you need any help customizing this setup or have questions about specs, post a comment below and we'll get it answered!