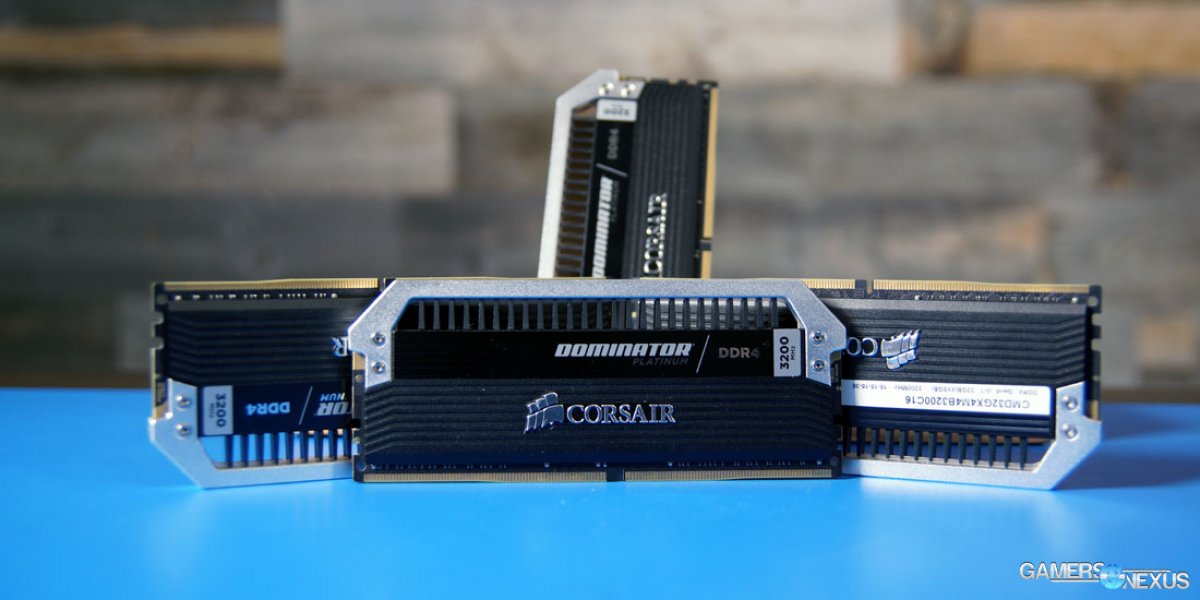 Two main platforms are being deployed for this test. The i7-6700K with an MSI M7 Z170 motherboard will be our main platform, with the i7-6700K overclocked to 4.4GHz. Memory used is 32GB of Corsair's Dominator Platinum DDR4 ($280), easily capable of speeds up to 3200MHz with its first XMP. A kit of 32GB HyperX Savage DDR3-2400 ($250) was additionally used for testing on an FX-8370 platform, just to look at another architecture's dealings with BF1 and memory performance.

We manually tune the speeds in BIOS before each set of tests, then run 6-8 test passes per device. DirectX 11 will be the focus for this test, since we've already shown that Dx12 has some optimization issues with Battlefield 1 that will sort of override any lacking RAM performance. We did execute a few Dx12 tests, though.

The GPU used was our EVGA 1080 FTW Hybrid, so we don't have much in the way of bottlenecks when operating at 1080p and with Ultra settings. The most likely components to choke will be the CPU and RAM, and we've already shown CPU performance in previous tests.

The point here is to show scaling in memory. Keep in mind that as resolution increases and graphics workload intensifies, we will begin taxing the GPU more heavily and the memory frequency will become less relevant.

Game settings were manually controlled for the DUT. All games were run at presets defined in their respective charts. Our test courses are all manually conducted. In the case of our bulk data below, the same, easily repeatable test was conducted a minimum of eight times per device, per setting, per API. This ensures data integrity and helps to eliminate potential outliers. In the event of a performance anomaly, we conduct additional test passes until we understand what's going on. In NVIDIA's control panel, we disable G-Sync for testing (and disable FreeSync for AMD, where relevant). Note that these results were all done with the newest drivers (375.76), including the newest game patches, and may not be comparable to previous tests as a result. Also note that tests between reviewers should not necessarily be directly compared as testing methodology may be different. Just the measurement tool alone can have major impact.

We execute our tests with PresentMon via command line, a tool built by Microsoft and Intel to hook into the operating system and accurately fetch framerate and frametime data. Our team has built a custom, in-house Python script to extract average FPS, 1% low FPS, and 0.1% low FPS data (effectively 99/99.9 percentile metrics). The test pass is executed for 30 seconds per repetition, with a minimum of 3 repetitions. This ensures an easily replicated test course for accurate results between cards, vendors, and settings. You may learn about our 1% low and 0.1% low testing methodology here:

Please note that we use onPresent to measure framerate and frametimes. Reviewers must make a decision whether to use onPresent or onDisplay when testing with PresentMon. Neither is necessarily correct or incorrect, it just comes down to the type of data the reviewer wants to work with and analyze. For us, we look at frames on the Present. Some folks may use onDisplay, which would produce different results (particularly at the low-end). Make sure you understand what you're comparing results to if doing so, and also ensure that the same tools are used for analysis. A frame does not necessarily equal a frame between software packages. We trust PresentMon as the immediate future of benchmarking, particularly with its open source infrastructure built and maintained by Intel and Microsoft.

Battlefield 1 has a few critical settings that require tuning for adequate benchmarking. Except where otherwise noted, we disabled GPU memory restrictions for testing; this setting triggers dynamic quality scaling, creating unequal tests. We also set resolution render scale to 100% to match render resolution to display resolution. Field of View was changed to 80-degrees vertical to more appropriately fit what a player would use, since the default 55-degree vertical FOV is a little bit silly for competitive FPS players. This impacts FPS and should also be accounted for if attempting to cross-compare results. V-Sync and adaptive sync are disabled. Presets are used for quality, as defined by chart titles. Game performance swings based on test location, map, and in-game events. We tested in the Italian Avanti Savoia campaign level for singleplayer, and we tested on Argonne Forest for multiplayer. You can view our test course in the above, separate video.

Note that we used the console command gametime.maxvariablefps 0 to disable the framerate cap, in applicable test cases. This removes the Battlefield 1 limitation / FPS cap of 200FPS.

Continue to page 2 for the results.