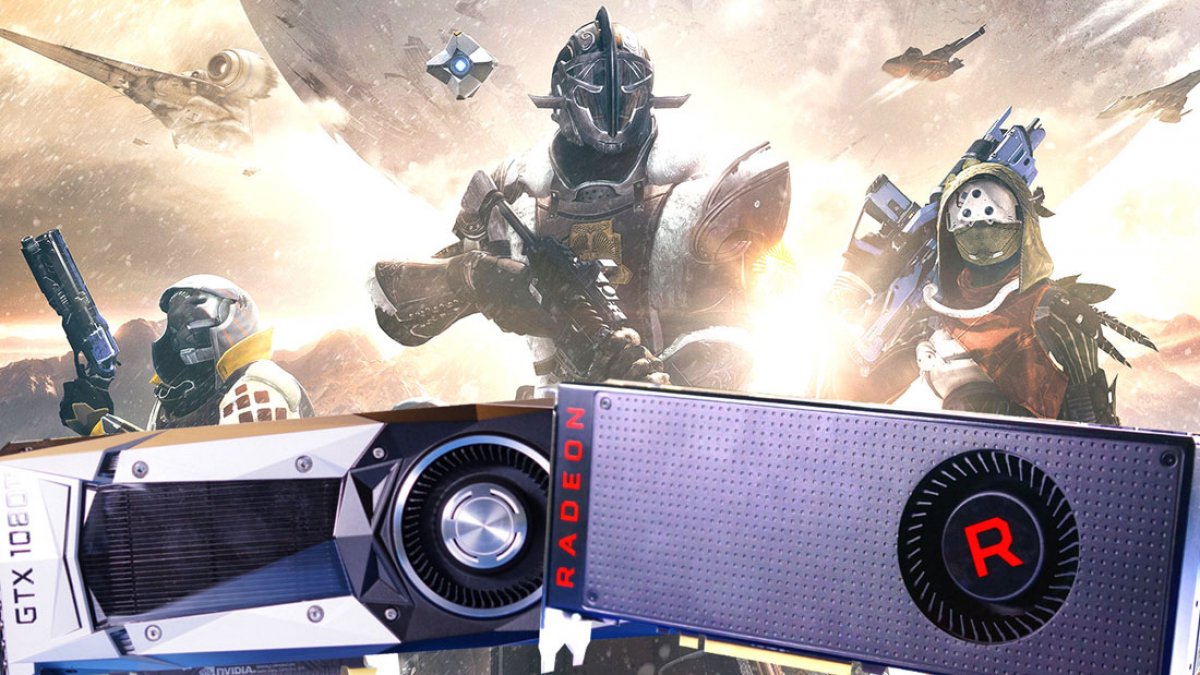 One final note: We had to change logging tools for this benchmark as Destiny 2 has continued its lock-down on third-party software. This means that our 1% low and 0.1% low metrics may not be directly translatable to the previous beta benchmarks. 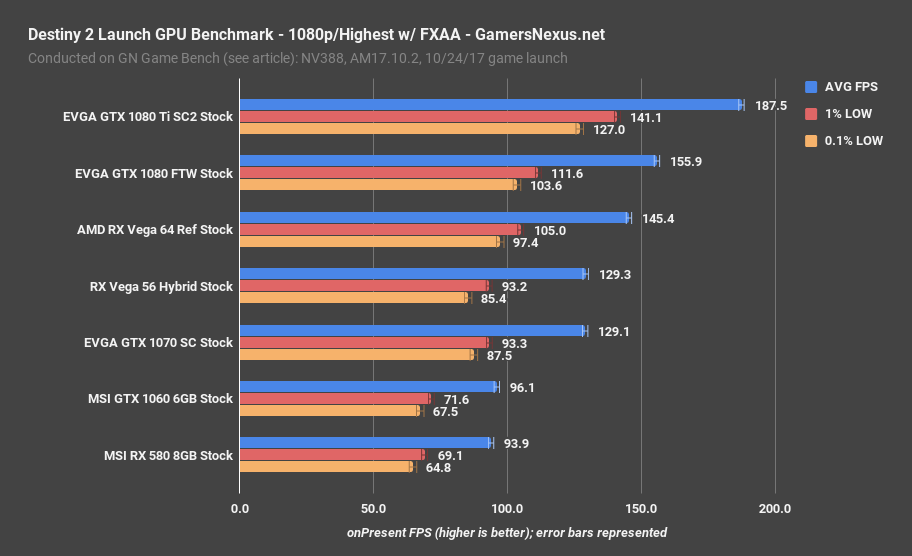 1080p/Highest starts us off, as that’s going to be the most popular configuration for the game. In this configuration, we’re bumping into the framerate wall for the 1080 Ti, which encounters the 200FPS cap during some parts of the benchmark. Despite encountering an artificial cap, the 1080 Ti leads the 1080 by approximately 20%, though we’ll have to look toward 1440p to understand uncapped scaling.

The GTX 1080 operates a 156FPS AVG, leading the RX Vega 64 card by 7.2%, marking substantial uplift from Vega’s previous 122FPS AVG in the beta and with the previous driver revision. That’s roughly a 19% performance increase from beta to full launch for Vega 64, bringing Vega 64 past the GTX 1070 and closer to the GTX 1080.

Here’s a frametime plot of the Vega 56 and GTX 1070 cards with these settings, just to give a better understanding of performance. As always, we’re looking for consistency, here, and note that lower, more consistent numbers are better. 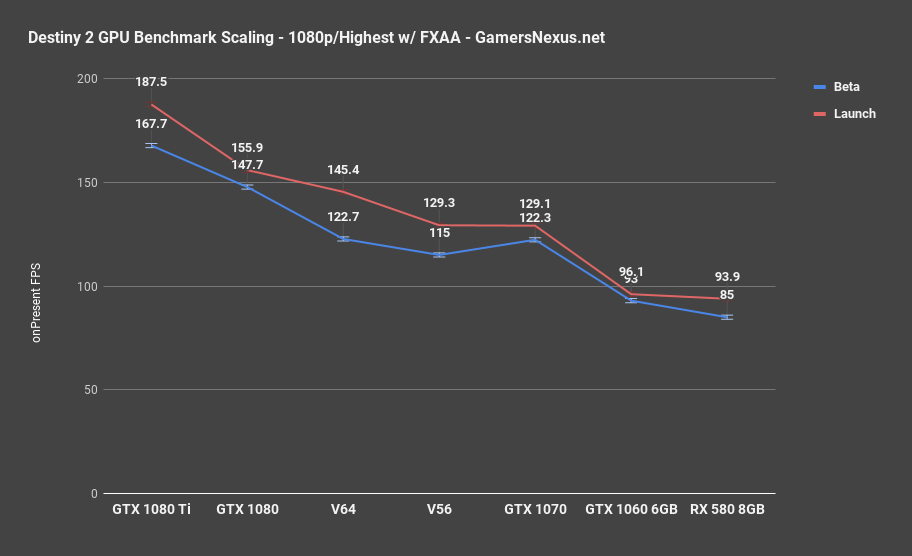 This next chart is cool. For scalability versus the beta, this line plot shows the average FPS of each GPU versus the beta AVG FPS, which was tested with earlier driver and game revisions. NVidia primarily benefits in the 1080 Ti, with the 1060, 1070, and 1080 posting smaller gains in the range of 3-6%. As you’ll learn in a moment, these gains are primarily due to a CPU bottleneck loosening. AMD’s Vega 64 and Vega 56 clearly benefited from the either the graphics options changes, the AMD drivers, or both, registering 12-19% performance uplift, with these settings. The Polaris RX 580 also gains reasonably. This difference is enough to swing V56 tied with the 1070, as opposed to the previous deficit against the 1070. 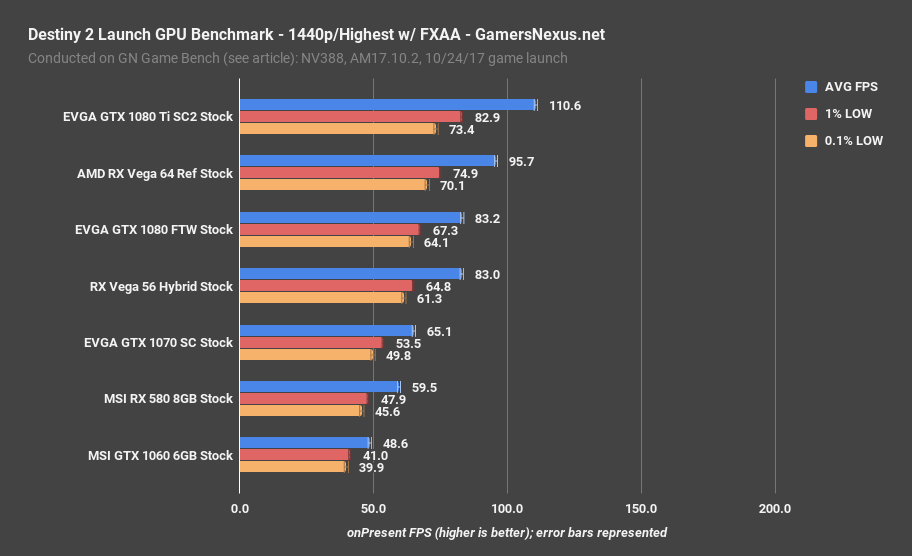 Vega 56 is also functionally tied with the performance of the GTX 1080 FTW at 1440p/Highest, plotting an 83FPS AVG, and keeping lows consistent. This places Vega 56 in an advantaged position versus the 1080 and 1070 and, if you can find it for MSRP, makes it the better competitor at its price-point for these particular settings – but it gets more complex than that, as you’ll see in a moment.

As for scalability versus the beta, here’s what we have: 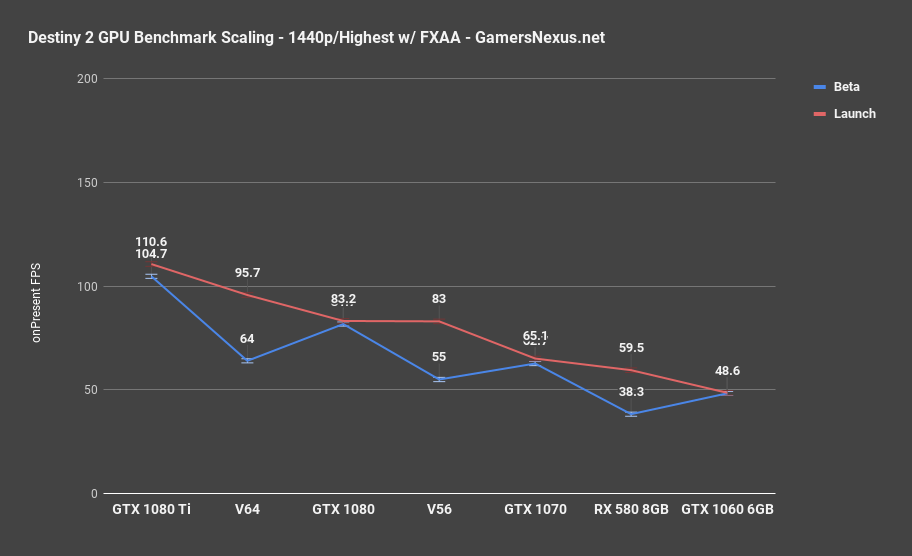 The nVidia cards show almost no scaling here, partly because nVidia already had game-ready drivers at the time of beta launch, so there’s less ground for GTX devices to gain. Vega 56 posts a gain of 50.9% in average FPS for our test, close to AMD’s boasted 42% gains with the driver, and Vega 64 posts 49.5% scaling. Although this isn’t an unprecedented gain from a driver update and game update, the two compounded together make for a large leap on the line plot.

Here’s where that data gets interesting. If you recall the 1080p comparison between the beta and launch, nVidia cards were posting more notable gains than in the 1440p chart, where we saw nearly 0 gains. Remember that the 1080 Ti had the largest gains of all the nVidia cards, with the GTX 1060 posting nearly 0 uplift.

That’s because of a CPU uplift in Destiny 2, which we also have plotted in our forthcoming Destiny 2 CPU benchmark. This CPU uplift has alleviated some of the bottlenecking on the 1080 Ti – hence the bigger gains – but obviously hasn’t helped at the 1060-level, because we were already limited by the GPU. This is an instance where, at 1080p/Highest, the gains look like they do on the GPUs not because of GPU uplift, but because of alleviated constraints in the CPU pipe. That’s why the two plots are so different. 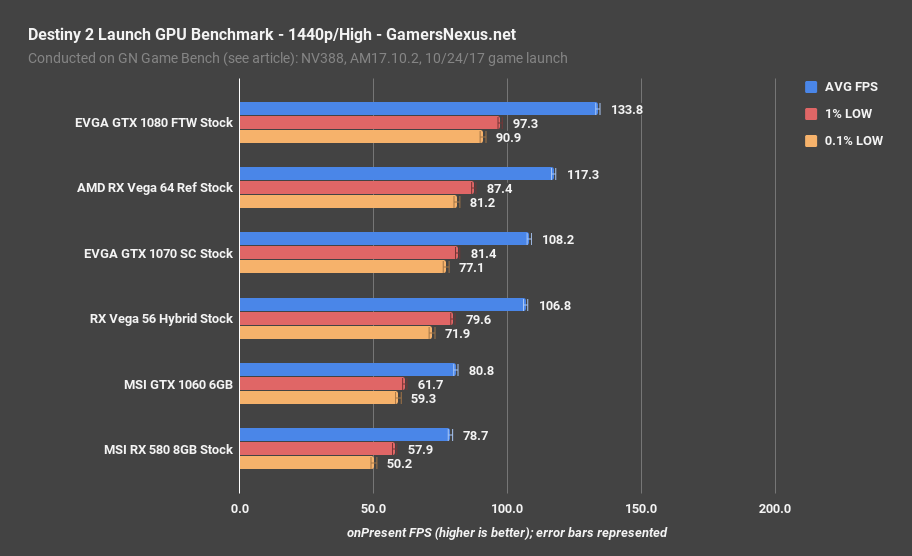 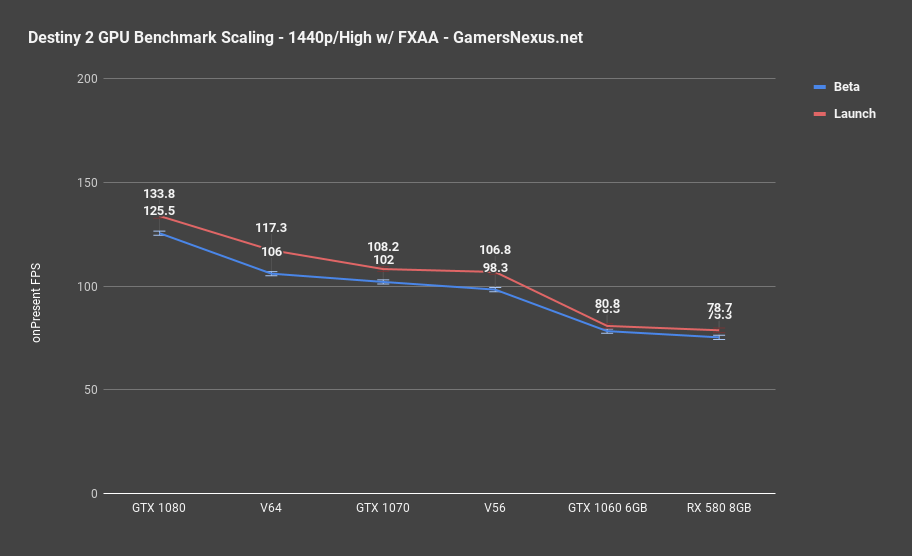 And here’s that beta vs. launch scalability chart. It now becomes clear that AMD had the most to gain when running highest settings between launch and beta, which is something that we highlighted in our original Destiny 2 beta research and coverage. During the beta, we root-caused this to Depth of Field on Highest, which tanked AMD GPU performance. 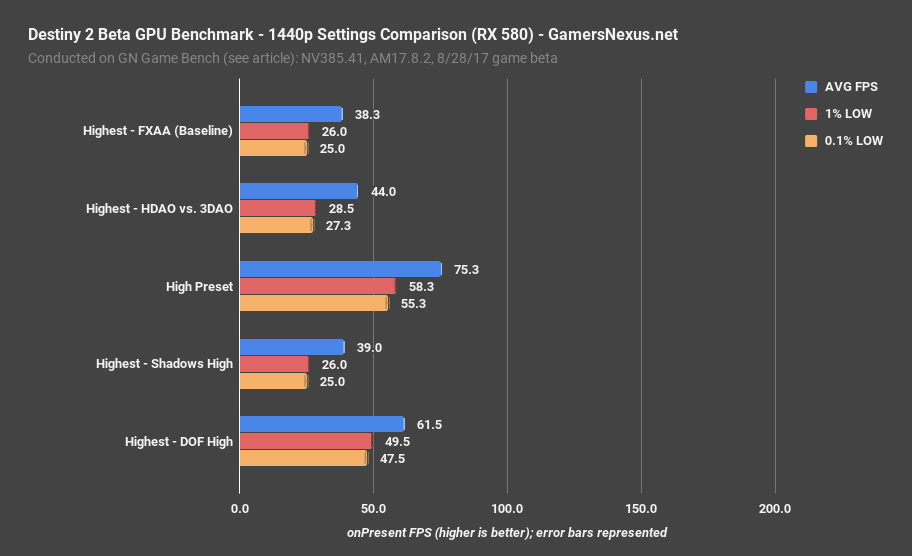 You can see that in our beta graphics optimization guide, where changing only Depth of Field from Highest to High could get us 82% of the way to switching all options to High. Something in AMD’s drivers or Destiny’s code has resolved this problem for AMD hardware. That’s the explanation of the performance we’re seeing. 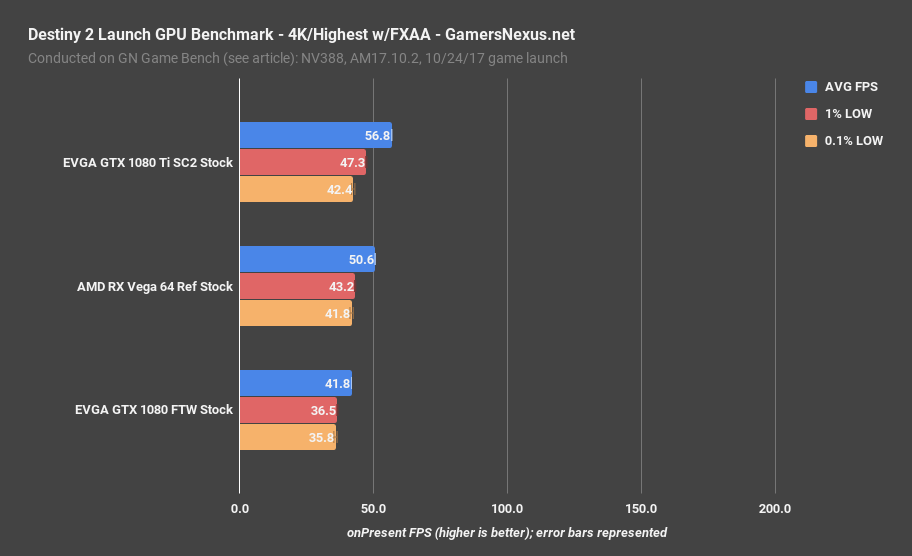 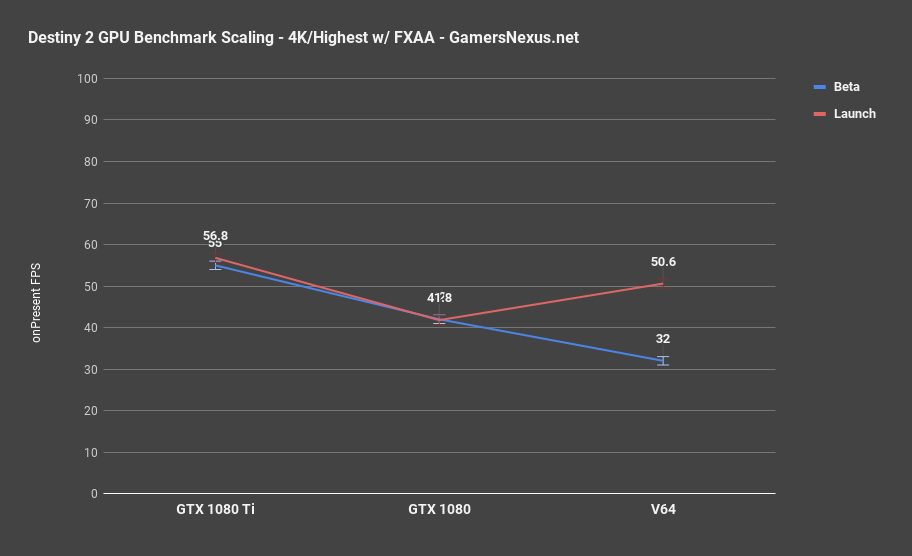 In terms of scaling, Vega 64 benefits the most, moving from 32FPS AVG to 50.6FPS AVG with the launch drivers and launch game version. 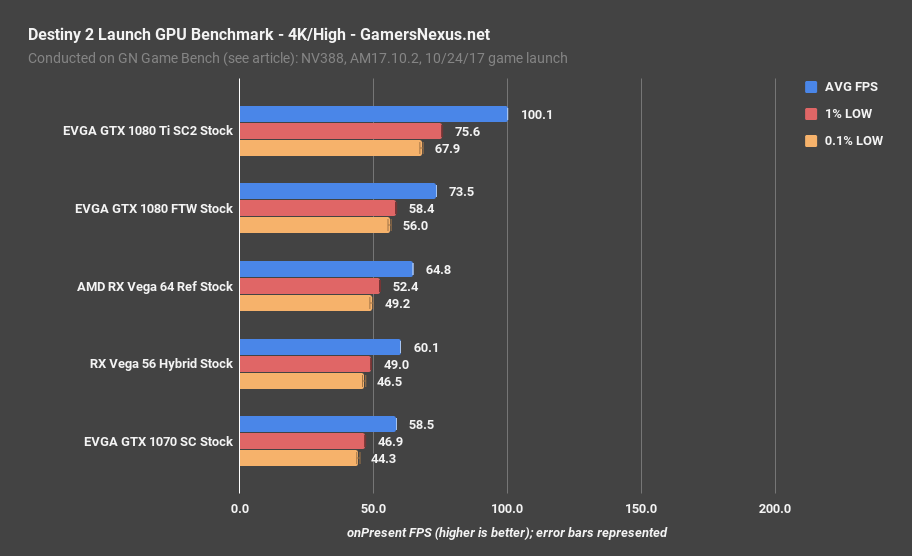 We’re seeing some CPU uplift from the beta, resulting in an upward pull on results across the board. This is coupled with major modifications to AMD’s driver implementation, which AMD itself earmarks as offering “up to 43%” performance improvement. Our numbers have largely validated AMD’s, and we believe we’ve pinpointed most of said uplift to shader optimizations with some of the Highest settings. Depth of Field seems to be of particular note, as indicated by our beta graphics optimization guide. Retaining all Highest settings, but dropping DOF to High, our beta testing suggested that 82% of “High” performance could be gained.

It seems as if either AMD or Bungie optimized how some of these Highest settings are handled on AMD hardware, offering some of the near-50% boosts that we’re seeing over beta performance.

NVidia’s uplift in these tests (versus beta) largely seem to correspond with CPU performance uplift on the whole, which could be caused by a couple of things – game-level changes being one of them.

Our CPU benchmark is forthcoming and targeted for publication within the next 24 hours. Keep an eye out for that.