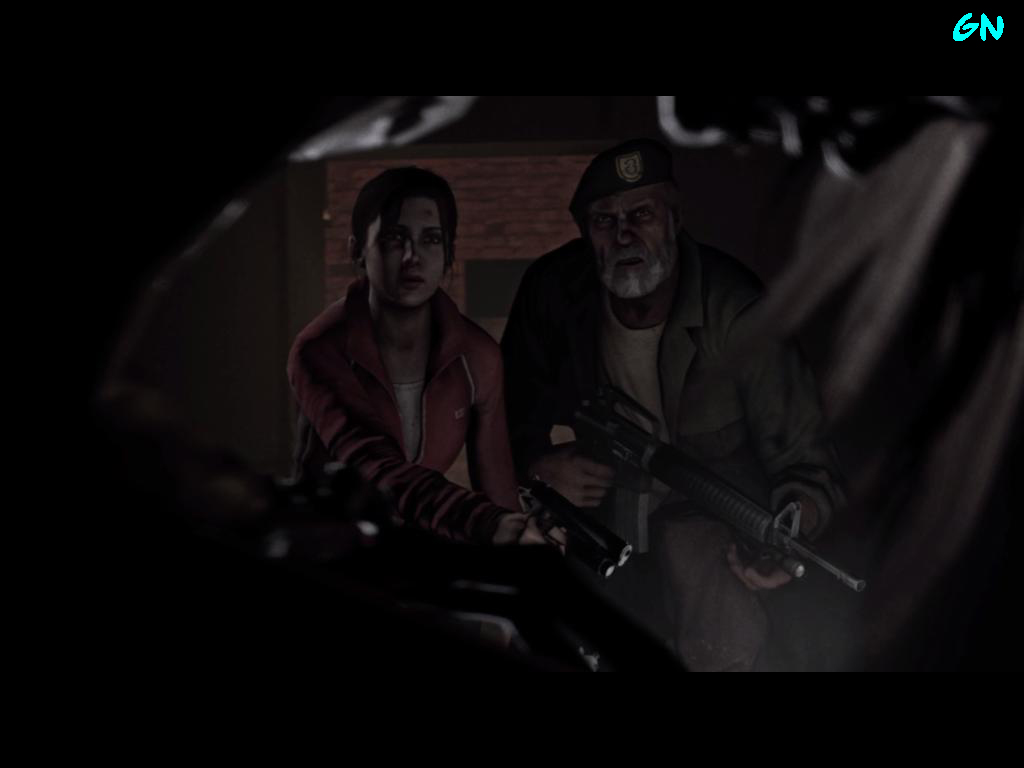 The game’s concept is very basic: Four survivors try to survive a zombie invasion by making their way to an evacuation point. The game allows you to play through four “movies” (campaigns), each split into 5 “scenes” (missions). Each campaign provides a unique experience, from trying to gun down zombies as they run across an airfield, to holding up inside an abandoned house until a military APC can get you out. Now 4 movies may not sound like very much, but the “Director”, or the AI controlling the zombies, tweaks the invasion every time you play the game. You’ll pass one area that’s swarming with zombies, but the next time you pass through that same area, it might be completely deserted – only to have zombies ambush you ‘round the bend.  The Director also organizes a survivor’s biggest fear, the special infected.  The special infected are as follows; the Hunter, the Smoker, the Boomer, the Tank, and the Witch. 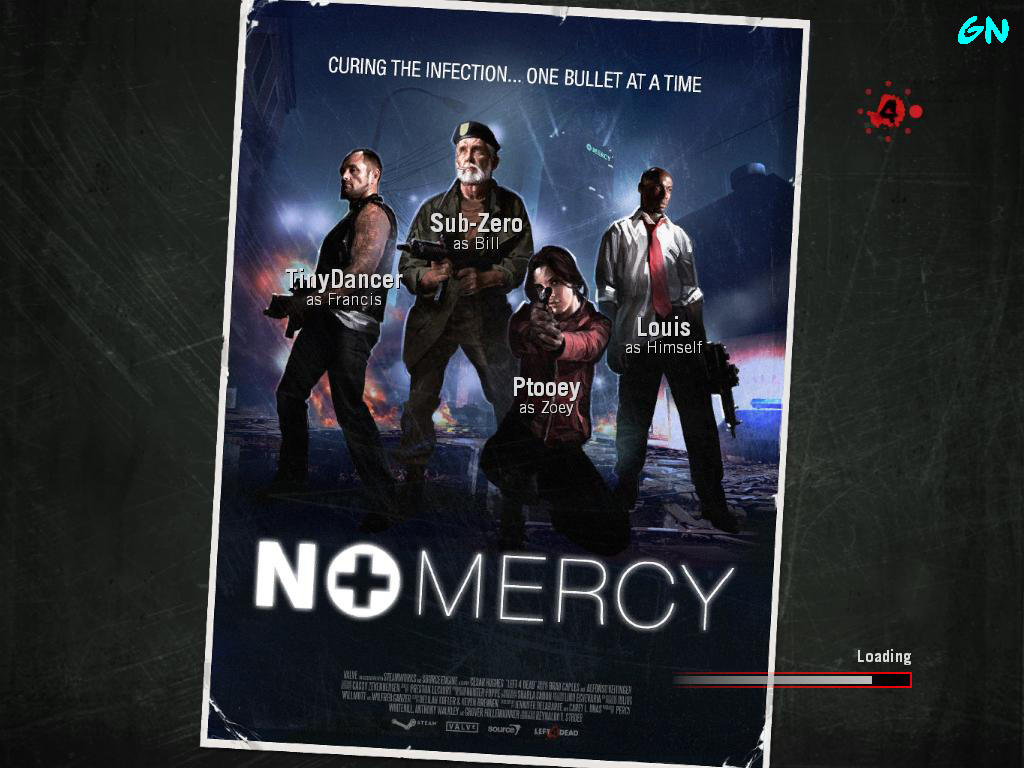 And now for your Feature Presentation.

Playing through the movies is a very rewarding experience that is enhanced by having friends by your side. The entire game is developed around the idea of teamwork; however, this does not always benefit everybody.  Since the game requires players to help each other out in order to get anywhere, oftentimes one maverick charging ahead and not listening to reason can ruin a mission (luckily, there is an easy-to-use vote kick option). After getting rid of the few bad apples and establishing a trustworthy team, you’re ready to take on the zombies.  Players are equipped with a plethora of ways to handle zombies, would you rather, (a) shoot them with one of the seven guns, (b) set the hordes on fire, (c) blow them up, or (d) melee them with whatever you’re carrying, including med-kits.  Each movie starts you with a pistol, and the choice between a pump-shotgun, the classic zombie killer, or an SMG; later you can find a Hunting Rifle, M16, Auto-shotgun, and dual pistols.  All of the guns are fun to use, and you’ll find that even if skeptical, you won’t easily tire of this arsenal. If that wasn’t enough, Molotov cocktails, pipe bombs, gas canisters, c02 tanks, propane tanks, and mounted turrets are all fun toys that complement the array of guns.  Be careful where you shoot however, since friendly fire is always on to some extent. Friendly fire becomes more effective as the difficulty increases, on easy, shooting your friend barely scratches the skin, in expert, he’ll be yelling at you from beyond the grave. 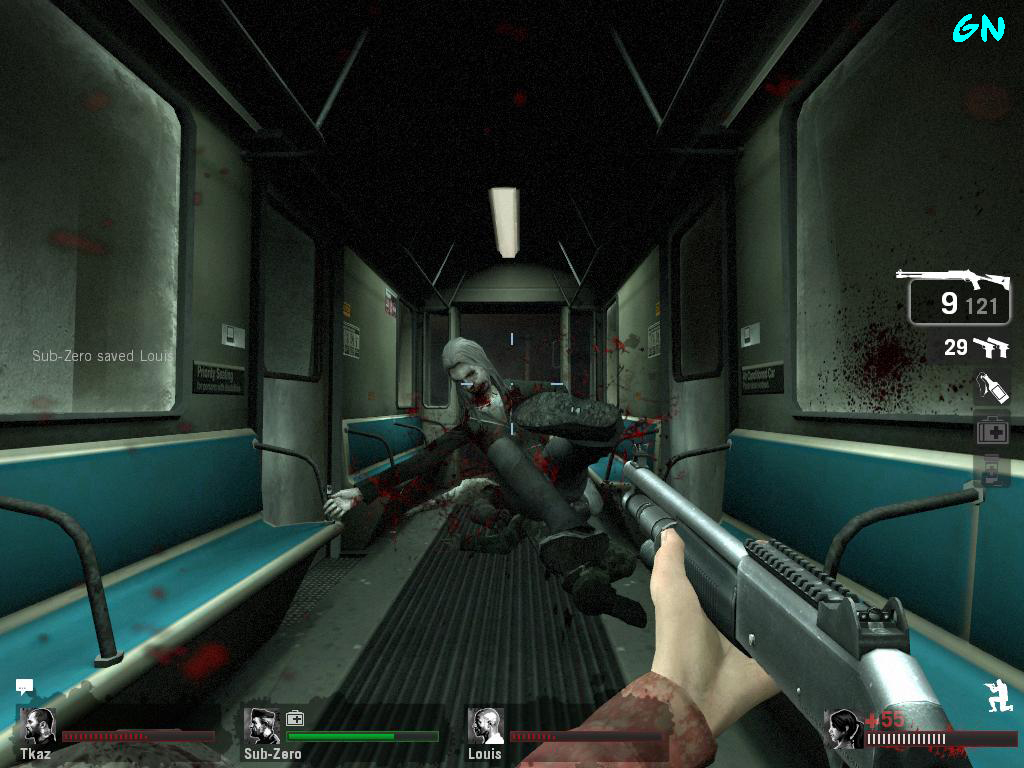 Blowing away some zombies with the auto-shotty.

Your faithful companions can be ripped from limb-to-limb in several different ways, being knocked down by simply being hit, pounced on by hunters, or choked by smokers. Once knocked down, another survivor must help the fallen comrade up or they will slowly die. After being pounced upon, allied survivors have to either shoot the hunter off or melee him off so that the downed player can stand up, or proceed to get help up. Smokers work about the same way as hunters, but you can also shoot or melee their tongues.  Thinking fast is not an option when your friend is being pulled away by a smoker, your other friend is being ripped to shreds by a hunter, and you’re about to be overrun by a zombie horde, gut-instinct is a leading factor in L4D. 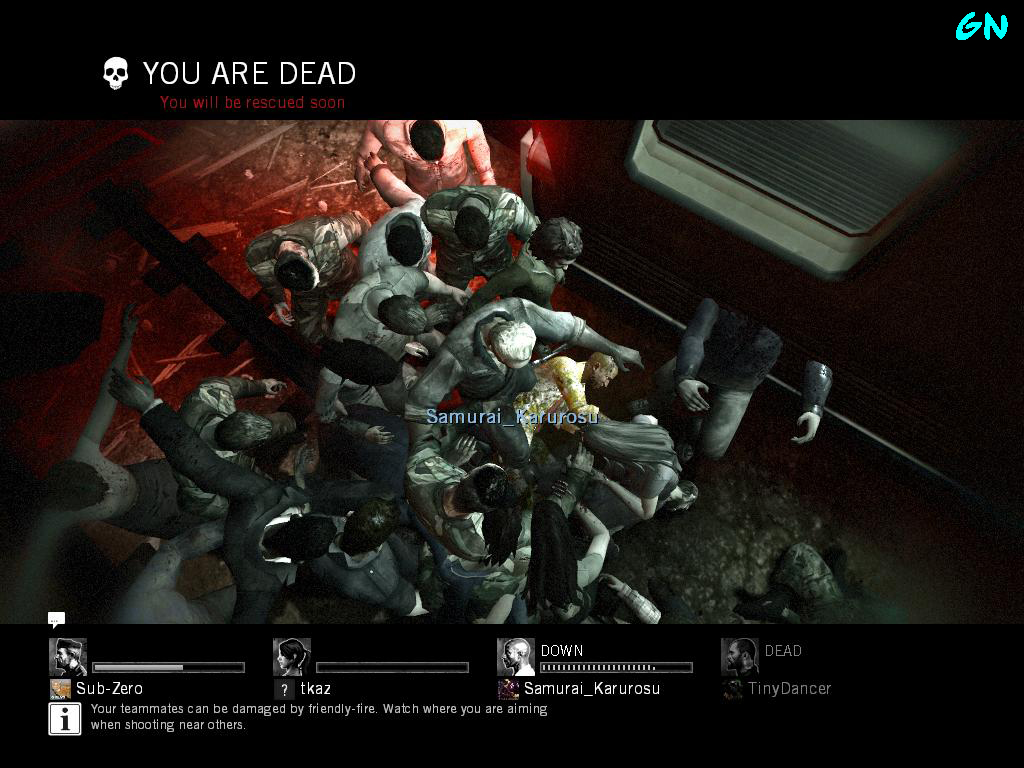 The Hunter can leap great distances, pinning the survivors down and rendering them helpless whilst the Hunter tears their flesh away. The Smoker has the ability to pull survivors great distances, with what seems to be his tongue, either choking them against something or bashing them to death while they’re entangled. The Boomer throws up zombie-horde attracting bile that provides a potentially lethal distraction to any afflicted survivors.  The Tank can not only soak up copious amounts of damage, but also knock survivors off their feet and flying into the air backwards, or even throw huge mounds of earth. The Witch is a special infected, disturbed (effectively awakened) by walking too close, shooting her, or shining your flashlight on her. Once disturbed, the Witch flings herself at the survivor stupid enough to annoy her, killing him and then running away screaming. The Director knows how to use this arsenal of zombies, making your play varied every time. 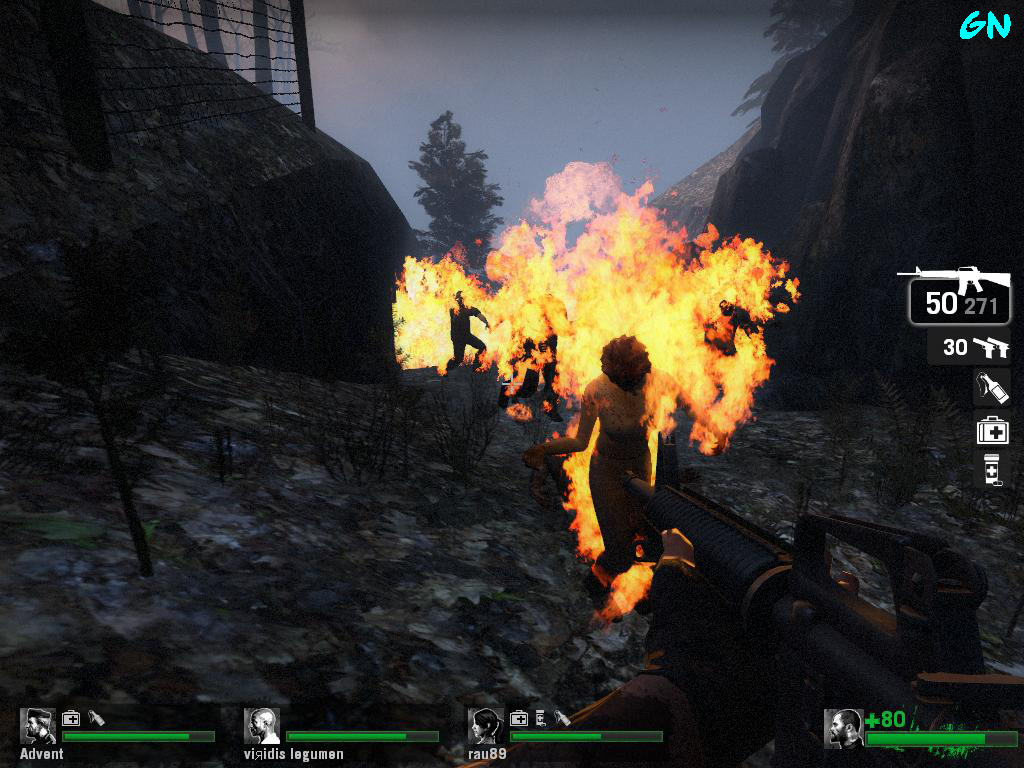 Zombie in the forest Fire.

Even though the four characters are set, and you can’t change their appearance or personalities in game, Left 4 Dead is a totally immersive experience.  You’ll be playing for hours. A friend’s desperate plea for assistance will override the sometimes witty and hilarious comments made by characters, providing a much smoother experience, actually caring about how your friend’s being torn in half, as opposed to an NPC. Don’t get me wrong though, you’ll grow acquainted to all the characters, especially if you play single-player; it’s then you’ll truly appreciate the voice acting.  The servers started off faulty, but are already more reliable. The lobby system in Left 4 Dead makes grouping-up before starting a game easy, or just jump into a game already in progress and fill a missing slot.  When playing as the survivors, if you are ill fated enough to have someone go AFK, the AI takes their place, controlling their character until they return so that they’re not just sitting ducks and the rest of the team can keep moving. The ever-changing levels force you to be on your toes throughout playing, this isn’t one of those games where you can “get a snack” (oh, we know you do) while you do a part of the level since you’ve completed it before and know it’s slack.  With Left 4 Dead, that same part could be the most challenging this time around. Even the game’s soundtrack impressed me with how much it pulls you in.  It’s one part horror film soundtrack, and one part what you’d be humming in the back of your mind if you were in a zombie apocalypse. 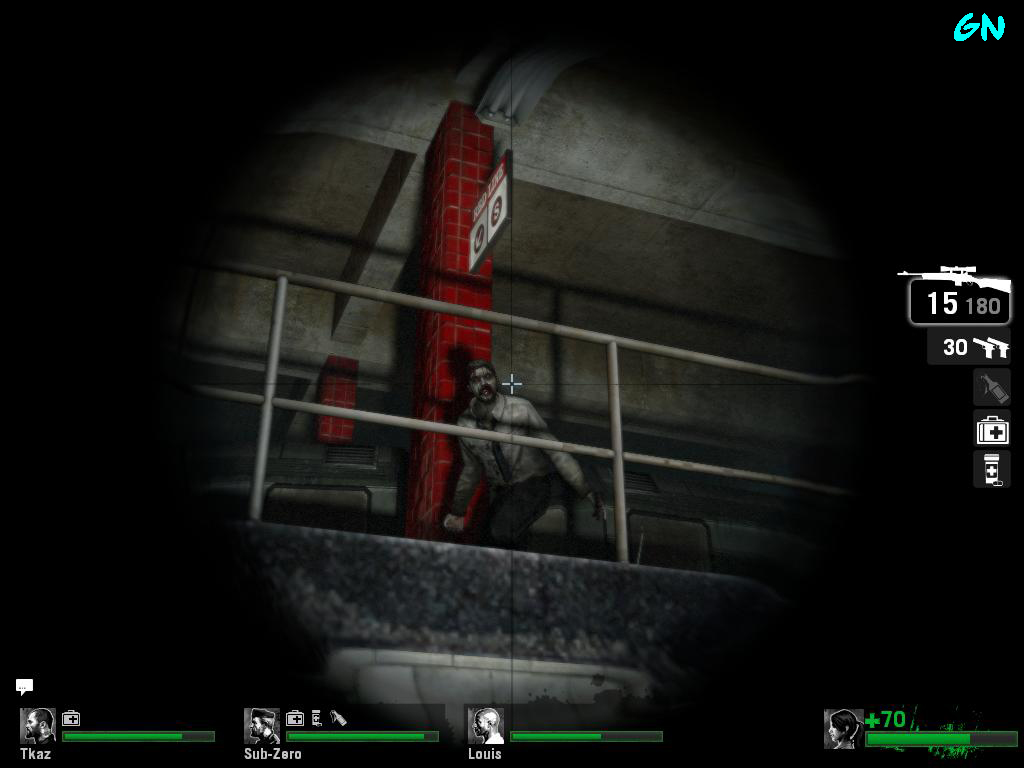 I think he sees me.

Don’t want the fun to end? Fear not!  There’s a 4 on 4 (Zombies v. Survivors) versus mode. Players are able to try out the entire special infected group, except the Witch. This adds a whole new dimension to the gameplay. The AI Director is intuitive, but now you must take your teamwork above and beyond the zombie’s collective thought in order to survive. Human gamers are much more conniving and adept than their backing horde armies.  Zombies must learn a whole new set of tactics to take down the survivors, for example, instead of sticking together, you might coordinate an attack from multiple angles; Smokering one away while two hunters attack from the flank, providing a distraction for the boomer to run in and cover them with bile. 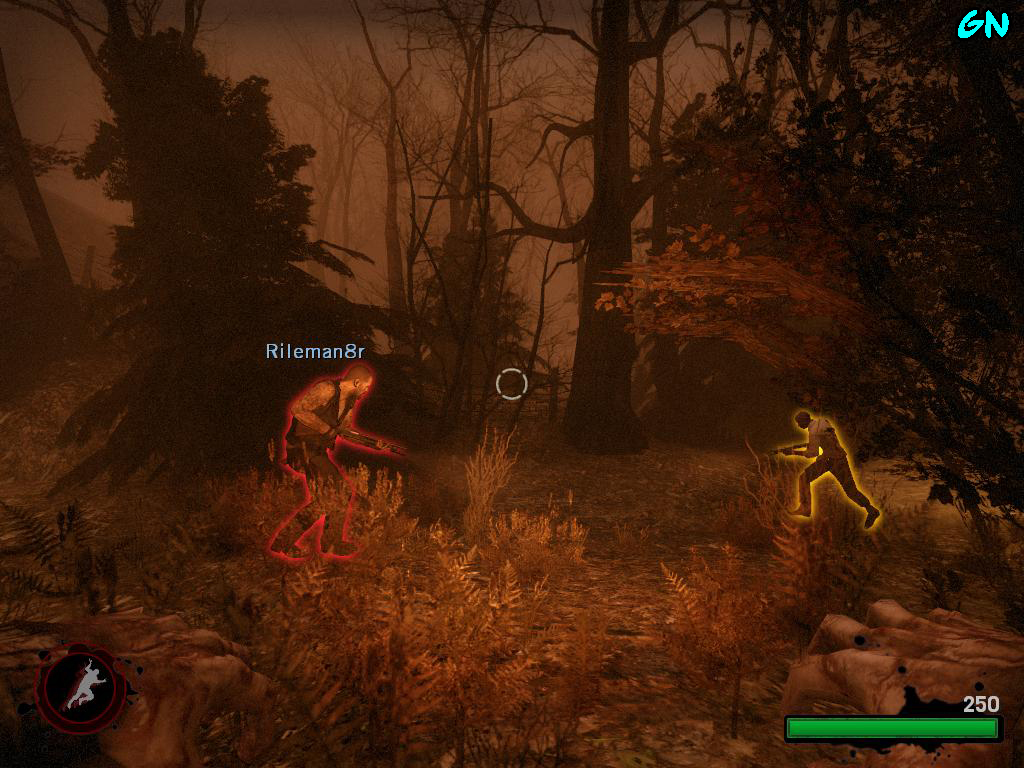 Oh, these guys are so about to get pounced.

There are a few discrepancies between Xbox360 and the Computer versions of the game.  Xbox360 can play single-player, two-player split-screen, or go online for the full experience. I’ve talked to peers and read forums discussing which community they think is worse, since the game isn’t cross-platforms (yet?), and the consensus was that the people playing on Xbox find it more unbearable than the computer audience. Patches tend to come out for computer games more frequently, and it’s easily modded on the computer version. There is already a Dawn of the Dead campaign under construction, and a Sean of the Dead mod, don't forget all of the custom maps for PC! 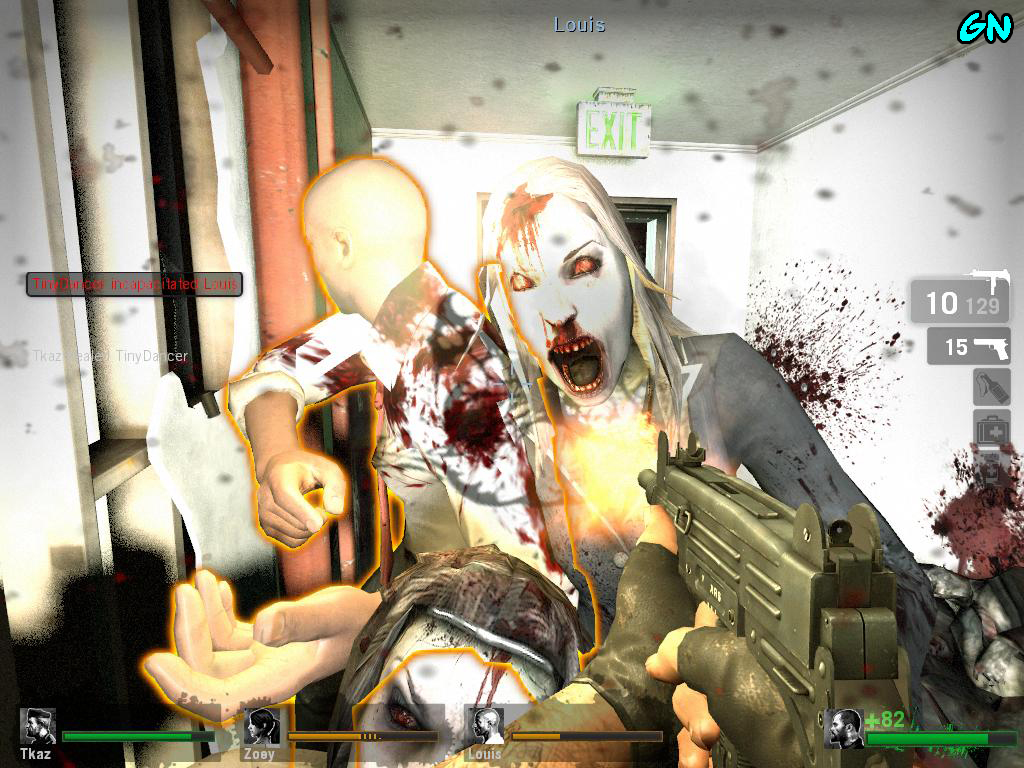 Either system will provide you with a heart-pumping zombie-fest.

The Good: Teamwork and immersion are flawless. The AI director alters levels, providing a different experience each time, drawing players back to the same movie again and again. Versus mode adds a whole new dimension to the game. Each movie is unique and allows you to play for however long you want to; you can play a single mission on easy for a quick 10-minute experience, or an entire movie on expert for hours of continuous fun. The survivors are likeable even though unchangeable.  Valve is on top of patches as always, and already hosts a great user-based modding community. There isn’t much more satisfying than blowing away zombies.

The Bad: You can’t modify the characters. There are a few bugs/exploits that might break immersion.