Twitch shooters have been a long-time staple in the somewhat volatile PC gaming market. Since its early days in the Quake and Unreal series, the clutch genre rooted itself with its fast-paced, drop-in/drop-out, competitive and entirely skill-based gameplay; without weapon balance to fall back on, games like Shootmania force players to be committed to their plan-of-attack and quick on the keys. It all comes down to the ability to dodge and return volleys quickly, often becoming a battle of reflexes before high-level strategy ever enters the field.

Shootmania continues the twitch shooter legacy, but uses a few interesting twists to further encourage skill-based play and strategy that's appealing to both the competitive and casual gamers. As I explain in my Shootmania: Storm video review and gameplay analysis, the game's focus on player dexterity by entirely eliminating weapon choice is what really sets it apart.

The gist of the game is pretty straight-forward: It's all about speed and aim. That's the heart of gameplay. No weapon switching, no insane amount of upgrades, no level-up unlockables, and no killstreak-helicopters-of-doom that reward strong players by making them stronger. Pure skill. Rather than rewarding being good by giving you better equipment, Shootmania encourages personal betterment simply by rating players higher on the leaderboards. The game's biggest lure is its ranking system, which allows players to focus on mastering the game and having fun, rather than stressing about overpowered perks that other players have.

You've got one weapon—a photon cannon—that has limited charges before cool-down, so each missed shot (and each one dodged) makes a huge difference in your chance of survival; there are technically a few other weapons in the game (like a hitscan railgun and 'grenade launcher' equivalent), but they're only enabled in key map locations/pads and have strategic uses. For all intents and purposes, though, you basically have one weapon at any given time, and that's normally the photon cannon.

There are a couple major game modes that dictate playstyle, but the FFA equivalent ("Royal") and competitive team-based mode ("Elite") are the most prolific of the game modes. Being a *mania game, there's a heavy focus on player-made content -- and that includes new game modes and maps. Here's the full list of both official and unofficial (player-made) game modes - starred items are sustained by the player community:

Gameplay strategy varies greatly between each of these game types, but the overall content of the game remains largely the same. Before talking specifics on each of the variants and other more focused game elements, it's important to discuss what's at the heart of gameplay. 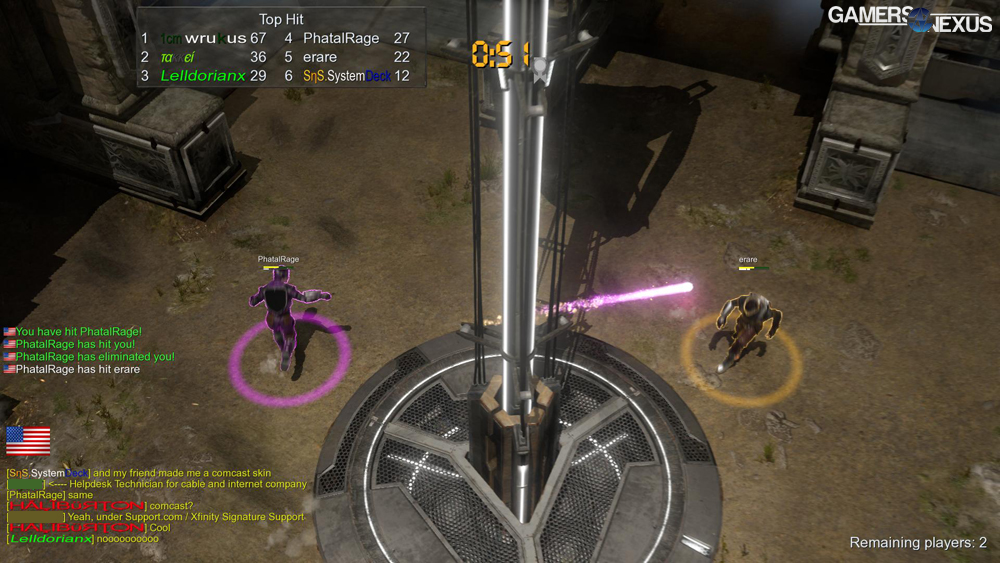 Given the game's focus on single-weapon combat and high attainable velocity, it's clear from the start that the only bottleneck in competitive performance is on the player's side of the equation; rather than rewarding players who already top the scoreboard with all manner of killstreak perks and weapons, Shootmania dedicates itself to enabling an even, drop-in/drop-out playfield. It's tough to explain mechanics without really showcasing them in action, so I pieced together this raw gameplay footage with live voiceover for your viewing -- "Royal" is the game mode:

Constraints drive the very heart of Shootmania. We're constrained to one active weapon at a time, constrained in sprint duration, actively constrained in map size (via the Storm, described in the video above), and constrained to four consecutive shots before a plasma cool-down is initiated. It's an interesting approach to design that ignites the player's kindled desire to improve his or her actual skill, rather than focusing on unlocking the biggest weapon in the game.

By using these constraints, Shootmania: Storm forces on-the-fly strategy changes and careful (but not too careful, lest you slow down) map navigation and bullet timings. Every single miscalculation has the potential to eliminate you from the round, though the short round times ensure that elimination doesn't feel like a punishment. When an action is executed flawlessly—like rushing the objective with such momentum that competitors are still leagues away—that action feels self-rewarding just by the nature of accomplishing a difficult task effectively. No achievements required.

Beyond personal skill improvement, Maniaplanet's somewhat famous leaderboards system (seen in Trackmania) also encourages progression. Each player is ranked by their State, country, and globally, with individual ranks for each official game mode; for instance, I'm presently ranked 40/500 in NC, 350 inNorth America(for "Royal"), and 2000 globally (out of some 30,000 registered players). That's down from the bottom-of-the-bottom when I started playing two weeks ago, and I've enjoyed every moment of that advancement and recognition. And as far as that recognition goes, the community is tight enough that you'll make friends and recognize other players within your first few sessions. Big plus.

Across all game modes (sans Obstacle), there are three key elements to Shootmania's gameplay: Aim, agility (dodging), and momentum. The standard-issue plasma/photon cannon can only fire four shots prior to hitting a cool-down timer, so each missed shot can be the difference of elimination; this makes strategic timing and shot placement key to competition, adding an extra layer of thought on top of the existing layer of dexterity.

So, I've said that there's only one weapon, but I've also mentioned two other weapons... what gives? As far as core gameplay is concerned, it's really just the photon cannon that you're going to be using. A few maps offer bunkers for cover or elevated pads for vantage points -- entering either of these two 'zones' will switch your weapon (you have no choice in the matter) to either a grenade launcher or railgun, respectively. Each has its ups and downs -- mostly speed and cool-down -- but they're rare enough in gameplay that we don't really count them as "true" constant weapons; they can be seen more as temporary, location-requisite power-ups. And even in the face of these, players are only equipped with one weapon at any given time.

And we've gotten this far without talking about the game's namesake: the Storm. Let's dive into some of the deeper game mode mechanics.

Starting with Royal, our more casual FFA mode, servers pack in 16+ players to an arena-style map. In this FFA format, players are ranked on the leaderboards based on points accumulated. Points can be picked up in three major ways: by hitting players, by out-surviving other players, and by capturing the pole. The "pole" is a centrally-located flag that can be captured by players, who—upon doing so—gain a decent amount of points and are almost immediately engaged in combat. Capturing the pole is a risky endeavor just by its nature of being dead-center, and the point award normally draws the better players, so there's a good chance that pole-runners get eliminated early-on. That said, respawn is enabled until the pole is captured (though you come back with a penalty - only 1 shield instead of 2).

Once it's captured, respawn is disabled and 'the storm' activates. Shootmania's namesake Storm is effectively a means through which the map is compressed over time, slowly forcing players inward and thus forcing conflict. The whole dynamic makes camping impossible -- getting 'caught' in the storm immediately eliminates players, so it's important to get movin' as soon as the trigger goes off.

Eventually, as the storm moves inward and players are whittled down, we're faced with a final conflict between a handful of remaining players in the central ring. The storm stops moving at this point and players must eliminate each other within the remaining minute of time; the last person standing receives bonus points and has a good shot at winning the whole map.

Because of the way the storm works, we see a very Hunger Games-esque series of strategic options unfolding as the match progresses. Upon spawning, players who feel confident in their ability to exploit the game's momentum-based sprinting can jaunt for the pole and hope to arrive uncontested, ideally securing their spot on the leaderboard without conflict. Alternatively, skirting around the edges of the map—like a shark awaiting a vulnerability to be exploited in unsuspecting targets—could potentially yield a higher points pay-out by nature of out-surviving other players. Each player you outlast gains more points, so it's a viable option that's completely mirrored from the more rush-based flag-capping.

Of course, there's always the path of simply being good. Hitting players gains points cumulatively (+1 for the first hit, +2 for the second, and so on), so eliminating several players in a single match can place you ridiculously high on the leaderboard.

Royal's gameplay offers a fantastic drop-in/drop-out style of play that easily allows both short and long gaming sessions. Speaking strictly for myself, I haven't found Shootmania's "Royal" mode to be frustrating in the least -- it's easy to be good, but it's challenging to win.

Ubisoft considers Royal to be their "more casual game mode," from what Ubisoft Community Manager Megan-Alyse O'Malley told us, emphasizing that "Elite seems to be our competitive mode right now, but we still run some Royal events." 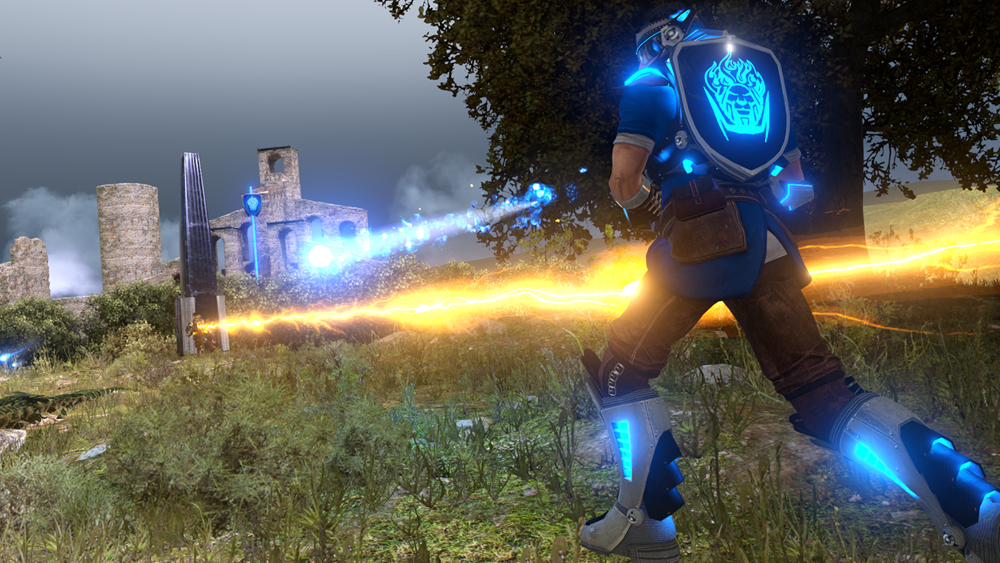 Some recent big-names in the gaming space have sponsored 3v3 Elite tournaments (like Alienware) with sizeable prizes, and while the game's still small, it has serious potential in the esports space. Personally, I really want to see Shootmania take-off as a spectator esport.

Elite mode is a 3v3 game mode that uses a single-person juggernaut rotation. Defenders and attackers alternate each round, with defenders attempting to fend off the lone attacker (our 'juggernaut' or 'elite'). The attacker attempts to either eliminate all defending players or capture the pole once it's up for grabs.

So while it's a 3v3 mode, it's truly a 1v3 each individual round, with the points being allocated to the surviving team at the end of each conflict. The Elite player has more shields (3), a hitscan railgun, and often more advantageous map positioning. The defenders are equipped with the familiar-but-slower plasma cannons and only have one shield, but have the advantage of numbers on their side.

Here's a quick video I made detailing the game's player-sustained, non-competitive obstacle mode:

It's a damn good game. At around $20 on Steam right now, and with its wide spectrum of accommodated playstyles, there's very little reason not to grab Shootmania: Storm. Given NADEO's prominent modding community and the proliferation of custom maps/modes in the Trackmania games, it's no surprise that we've already seen several successful player-made modes emerge on Shootmania servers. If you're not a fan of the competitive nature of Elite and don't want to spend $20 just for the FFA mode, the custom game modes should easily give you additional arcadey options.

Custom skins (shown on me -- in first place) are easily added to the game. Did I say I'm in first place? I'm just showcasing the skin.

There aren't any major downsides to Shootmania. As it stands now, the community is still small - it's tough to find populated North American servers during normal work hours, but it's fine if you're playing at reasonable times (evenings, normally) or on the weekend.

Beyond that, Shootmania: Storm has successfully revived twitch-action shooters on both the competitive and casual levels, and with any luck, we'll see it achieve some success in the e-sports space.