I reveal the game's early plot, but I don't get into spoilers that will affect anyone's gameplay experience (per our revised review guidelines).

The Wolf Among Us is an adventure game inspired by the Fables comics universe. Players assume the role of Fabletown sheriff Bigby Wolf, the human form of the Big Bad Wolf. Bigby roams the streets of resolving conflicts between Fabletown characters -- Mr. Toad, Beauty and the Beast, and the Tweedles Dee and Dum all make appearances. The game combines adventure gameplay mechanics, dialogue wheels, and quicktime action scenes to create a dynamic storyline that plays out according to the player's actions. 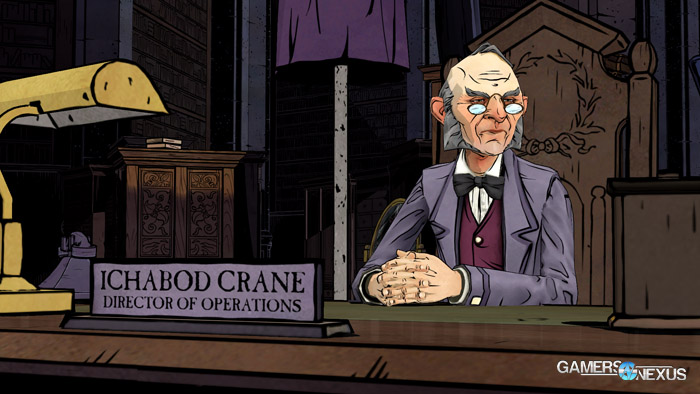 In Episode 1, Faith, Bigby visits a tenement building to investigate a domestic disturbance between a young woman named Faith and the Woodsman -- the guy who cut open the Big Bad Wolf to save Little Red Riding Hood. Just hours after confronting the Woodsman, Bigby and his partner in crime, Snow White, discover Faith has been murdered. This sends Bigby on a wild goose chase to track down Faith's killer and probe the Woodsman and other Fabletown characters for info & clues.

Faith's storyline resembles one characteristic of a cinematic thriller or something found in film noir -- or even neo noir, like . The early scenes with Bigby, Faith, and the Woodsman set the tone for a dark, disturbing series of events devoid of fairytale magic. The voice acting convinces me that these characters have left behind their former lives and face the issues ordinary people in gritty settings do.

Equally as convincing is Bigby's role as the bad-guy-gone-good. Telltale Games has done an excellent job of introducing Bigby's relationships with several Fabletown characters; Bigby struggles to rewrite his image as sheriff, but he mostly remains sincere throughout the first episode. I nearly forgot I was playing as the once-Big Bad Wolf -- or even a fairytale character for that matter.

The Wolf Among Us presents itself as a cinematic experience with the grit and edginess of a dark comic book. Scenes often take on different colors, especially when Bigby is in the streets. Players walk through environments rich with neon blues and yellows and sulk in black shadows amid fuchsia light. Environments appear as 3D but feature some 2D or hand-drawn aesthetics, such as surfaces and lighting & shadows. Imagine walking around in a comic book -- that's the game's presentation in a nutshell. 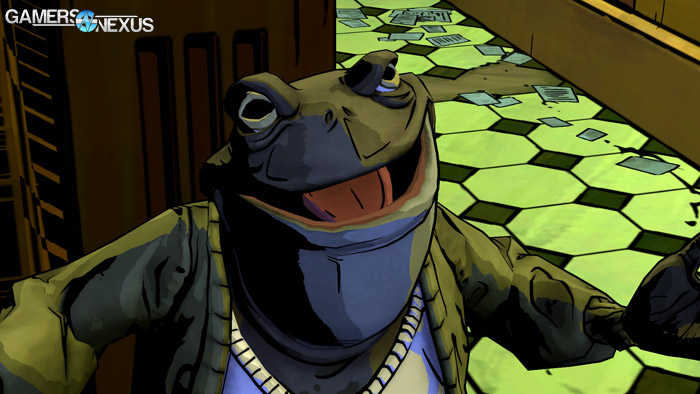 Telltale Games has put the most graphical detail into its characters. Often I recognized characters like the Tweedles and the Woodsman before any dialogue with them, but I instantly knew they were living a different life outside their fairytales. Characters are fleshed-out with visible scars, wrinkles, or blood that adds an extra layer of separation from their fairytales and keeps players cautious when investigating. It's also a popular tactic in tabletop gaming, where the smallest quirks and traits can help players identify an important NPC later in the session.

As I mentioned earlier, the excellent voice acting carries The Wolf Among Us' realism more than anything else. It even distracted me from thinking what dialogue decisions I would make, almost a "so good it's distracting" scenario. Adam Harrington (L.A. Noire, League of Legends) creates a restless-but-cautious Bigby and lends his voice well for the cold profile of the Woodsman.

The minimalistic, electronically-influenced soundtrack complements the eerie environments of Fabletown. It reminded me of a toned-down score for a thriller but, with its electronic approach, gave me a little feel of Blade Runner.

The Wolf Among Us takes gameplay cues from adventure, RPG, and casual action games; it is nearly a complete opposite of many other comic book-based games, including the likes of the Batman Arkham series and anything with Spiderman.

The most control players will have outside of cinematic and dialogue-driven scenes are investigation scenes. Bigby walks around a small environment examining objects and carrying out other interactions that help him piece together the murder. There's always a reticle hovering over the objects you can examine, so it's easy to check out everything in a particular scene before moving on.

I wish Telltale Games had created a challenge to either pick the right objects to investigate or find hidden objects by interacting more with the environment. That said, I can understand that Telltale wanted a fluid pace to the game to resemble reading a comic book or watching a film, and the added interactive elements may have detracted from speed and drawn focus away from story. My focus as a gamer remained on the storyline and its characters -- the biggest strengths of the game. 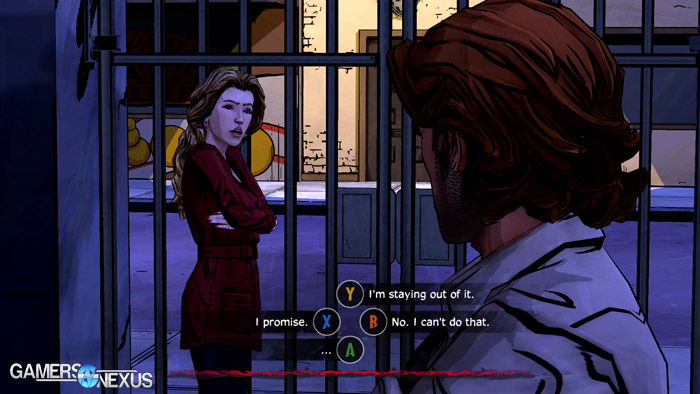 Bigby has perhaps 20-25 dialogue scenes in Episode 1; he speaks with a variety of innocent bystanders, colleagues, and suspects to determine what's going on in the world around him. His dialogue wheel usually has three options plus a "silence" option, often allowing players to portray him as Fabletown's protector or the same Big Bad Wolf. Bigby's words and decisions occasionally are remembered by the other characters, potentially impacting a particular future conversation or scene. This can even influence Bigby's overall relationship and disposition with each character, so choose dialogue wisely.

The dialogue feels very conversational and Bigby's responses come across as natural -- never forced or formulaic. I found myself spending as much time as possible deciding my dialogue because I feared mishandling my interactions with the characters would lead to someone getting hurt or missing out on crucial information.

I also liked how Telltale placed a time limit for each dialogue option, but there were a few times when I didn't have enough time to read all options and make a well thought-out, conscious decision. Hopefully Telltale can look into this more for the next episodes -- maybe add an option for more cautious thinkers or slower readers. 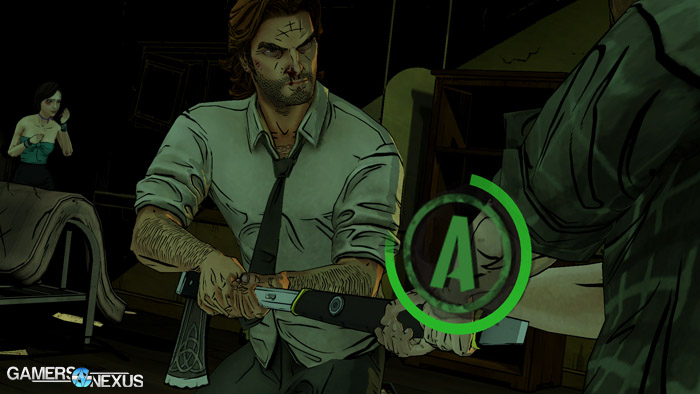 Telltale breaks up the dialogue and cinematics with a couple of physical confrontations. These play out as interactive cinematic moments that feature Bigby getting into fisticuffs with Fabeletown baddies. A single instance will often have two options to choose from -- for example, Bigby once had to choose to shove the woodsman into a dresser or onto a bed frame. This means that players can replay the scene several times while making new decisions each time. Most instances last only two or three seconds, keeping players alert while living up to the suspense in the preceding scenes.

I enjoyed the chaos of having to pick an action in each instance and move my reticle in line with the blinking red circle, but I often found the overall mechanic clumsy. For example, sometimes Bigby would execute a move even when I hadn't locked onto the circle correctly. This slightly turned me off from the dynamic action scene; it was almost like the quicktime event was a distraction from an otherwise scripted sequence. This is the biggest gripe I have in The Wolf Among Us.

Episode 1 excites me for the rest of The Wolf Among Us because of its story and plot twists, vivid characters, and striking visuals. I'm interested to see how my choices in this episode transpire in the rest of the series. I'm sure the rest of the series is worth playing for the storyline itself; the story's cliffhangar ending left me wide-eyed and repeating "No way, oh my god" for about thirty seconds, but I won't spoil the fun.

Hopefully in the coming months Telltale Games can work more on balancing the timed dialogue and polishing the action scenes. These enhancements would make the overall gameplay more fluid and would please gamers who are accustomed to dialogue trees and quicktime gameplay in other popular titles, like Mass Effect and God of War.

My gripes aside, I certainly recommend The Wolf Among Us for comic books fans, film noir connoisseurs, and gamers who want a break from running and gunning or RPG grinding.

I'll continue to cover The Wolf Among as Telltale Games releases each episode.