Insurgency is a full-fledged multiplayer FPS game based on the Source mod of the same name, Insurgency: Modern Infantry Combat. It features a realistic, tactical style of play, but tries to expand accessibility in the new version. The release date for Insurgency (formerly called “Insurgency 2”) was January 22, 2014 and is available on PC now.

"There's a whole mess'a freedom-lovin' folks over in them hills!"

Insurgency: Modern Infantry Combat (INS) was in the first set of three mods released for free download on Steam; prior to this, gamers had to locate the Source mods online and install them manually – which generally posed a discovery issue for the mods. Insurgency, Age of Chivalry, and Dystopia were the first three “free games” (mods) on Steam, before F2P was even allowed.

After the success of Insurgency: Modern Infantry Combat (INS), mod developer Jeremy Blum founded New World Interactive. NWI's first project was to release a more accessible version of Insurgency using the latest version of the Source Engine. Insurgency carries over the teamwork-based game modes and realism that made INS popular. With better graphics, more game modes, and an increased focus on the feel of the game, Insurgency is a fresh FPS game that doesn't steer too far from its roots, but should be more 'playable' to less serious players.

In Insurgency players are divided into two teams: Security (affectionately, “Freedom”) and the Insurgents (INS had Marines and Insurgents). The maximum number of players is still 32, with 16 players per team, though servers range widely in player-count and can be modded per standard Source dedicated server configurations.

Insurgency features 'roles' (player classes), effectively a structure that limits what kinds of weapons are on the map and how many exist on each team. In its practical application, this helps limit things like sniper rifles, ensuring players remain focused on objectives.

The simplified HUD and free-aim system both carried over from INS. By using a trimmed-down UI, Insurgency furthers the 'realism' element (and even eliminates the standard-drawn crosshair), keeping us focused on the action. The UI largely consists of a map, magazine count, and objectives/points. There is no killfeed, no health indicator, and no rounds ammunition indicator.

Maps are designed to be realistic and mimic areas of Iraq and Afghanistan. Although Syria was mentioned in our original call with the team, it seems to have been axed from the finalized project (either due to time or due to sensitivity with the ongoing conflict). Players will find themselves in complex buildings, open streets, marketplaces, and the mountains where they can play six different objective modes. 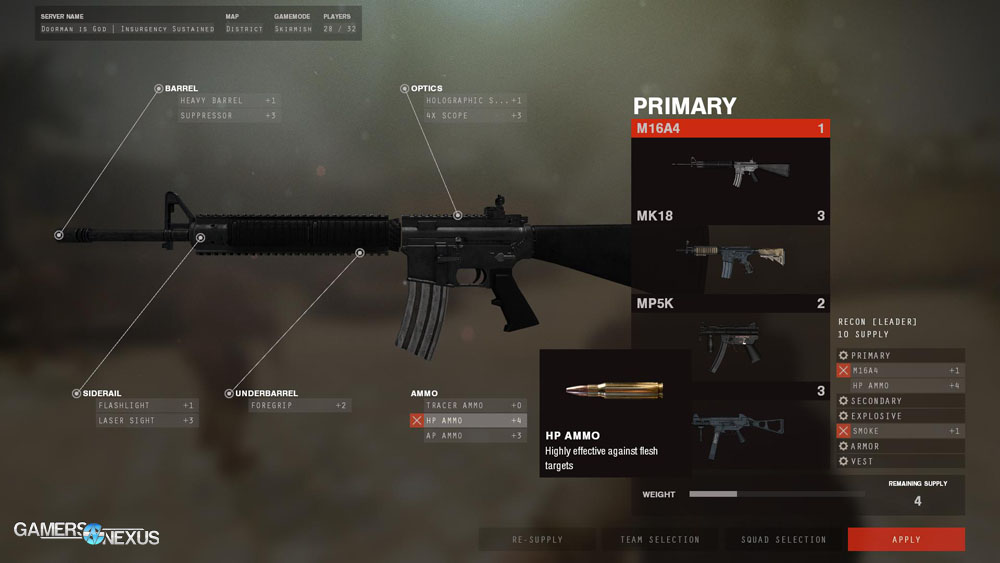 While the game does not feature a campaign mode, it does offer a training mode to help acquaint players to the game. After training mode, they suggest cooperative mode. The AI I've encountered in this game isn't particularly advanced and playing co-op mode, or checkpoint, could help new or struggling players. Co-op mode is either mission-based objectives or defending an area against approaching enemies. That said, it's very much like the Counter-Strike series: You're really not supposed to play against AI; it's a multiplayer game at its core.

For those already comfortable or confident with the game, there are six multiplayer modes: Firefight, Search and Destroy, VIP, Skirmish, Strike, and Push. All of these game modes are heavily team-based and encourage communication among teammates. If you're the type of player who likes to go in games, camp a corner, and rack-up kills, these modes aren't for you. Most players average 4-8 kills per round with a few stand-out players who hit 15 or more. Games that have more players that hit higher numbers are games where teams are more balanced as opponents and/or more teamwork is implemented.

Most games don’t see numbers that high and MVP is rewarded to the player with the most points, not the most kills. Points are earned by completing objectives instead of by killing enemies. This gives players the incentive to go for the objective (other than the obviously winning the game) and reinforces the game's desire to make teams not only play together, but work together.

Teams are balanced by allowing players to pick which role they want to play. Which role you pick determines which weapons are available in your kit. Kits include a Primary Weapon, a Secondary Weapon, an Explosive, Armor, and a Chest slot.

Each member gets 10 Supply to use towards building their kit. Everything within a kit is assigned a point value of 0-4, based on power. Players pick and choose what to have in their kit at the start of the match. Items you pick affect both stamina and movement speed. Items have different weight values that affect how fast your character moves as well as how tired he gets. A heavily out-of-breath Insurgent or Security Unit doesn't shoot as accurately. This forces players to wait a moment before shooting.

You are given the opportunity to modify your kit in game, but changes won't occur until you die and spawn back in (unless still in spawn). It is possible to have more than 10 Supply, too: In Sustained Combat Modes (Skirmish, Strike, and Push), all players earn a Supply point for completing a round. In a best-of-three situation, the last game will have players at 13 Supply; both teams earn this point, regardless of victory. The points are not persistent outside of the current match. Once you pick a role, you can't change roles (if all are occupied) unless someone leaves the team and that role can be made available to you. 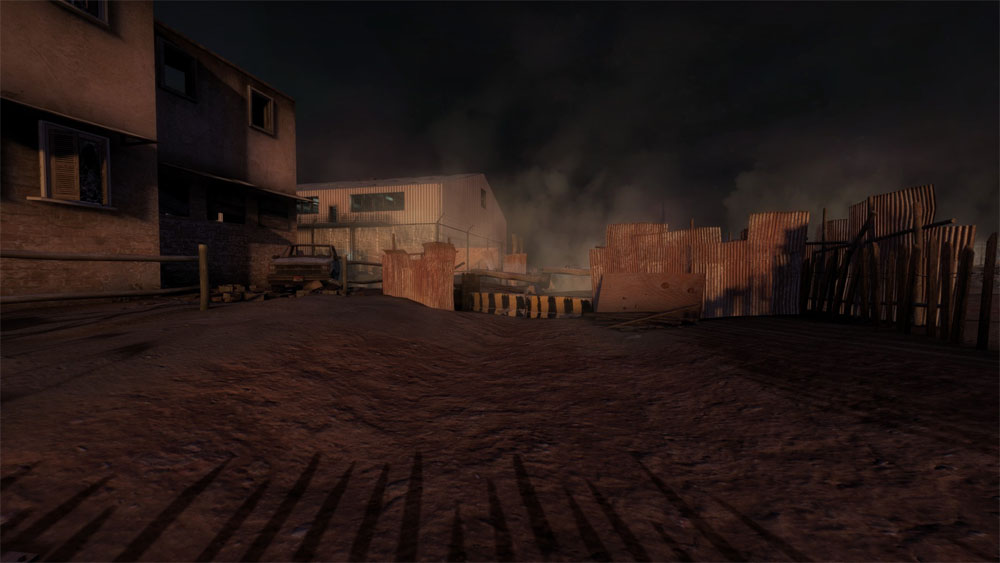 Class names appear to be game mode-specific and most classes have similar weapons available. It isn't so much what guns you get as much as the role you're mentally taking on. S&D, Strike, Skirmish, and Push all require players to destroy an objective. Destroying an objective takes either two grenades, a C4, or an AT4/RPG. Classes like Breacher, Demolitions, or Bomber will be expected to use their Supply towards having these weapons available. It is possible to carry two frag grenades in other classes as a way to take out objectives. Roles aren't too restricted, but they each have expectations.

There is no story to Insurgency, but the training mode did feel like the beginning of a campaign mode. I didn't stick through training mode after my AI decided that despite being VIP he could take on four opponents by himself.

Graphics-wise, nothing was extraordinary. Insurgency had the mid-range quality graphics of any realistic FPS / Source Engine game on the market. I wasn't displeased by this. The game looks good, but it didn't have anything that made it stand out from other FPS games.

Sounds were also standard. Each gun had its own specific sound. Gun shots changed based on whether they were fired indoors or outdoors. This has become a standard in realistic shooters and Insurgency doesn't disappoint. 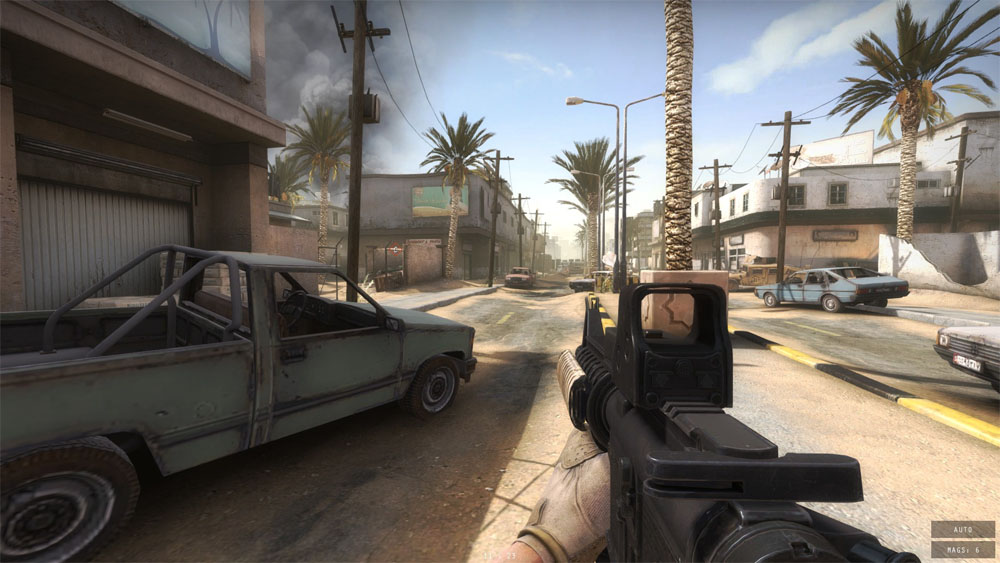 With the exception of Co-Op mode, all of the game modes are played on all of the maps. A lot of the time it feels like some game modes don't work on certain maps. Playing Push on a small map like District is difficult because of how the spawn system works. It's also equally as hard playing on an incredibly open map like Peak. While this adds to the game's desire to encourage teamwork, it also has a tendency to encourage raging or quitting.

With the stress on maps being realistic, some maps are often too intricate. District features an area we like to call the “the infinite building.” The amount of rooms, hallways, and staircases are hard to navigate and even after playing the map on multiple occasions it's incredibly easy to get lost. Maps feature areas that end in dead-ends that players might not ever see or use, so although it's kind of cool to have the extra rooms, they're totally pointless and misleading from a gameplay perspective. Gameplay always wins over realism. Always.

If you're a player who tends to go for the flank, you'll quickly learn it's not that possible. Insurgency uses dedicated spawns that they protect with a restricted area. If you get too close to an enemy spawn point, your gun is retracted and you're unable to shoot. This is frustrating because you'll find yourself in situations where you're behind three people and you can't do anything. A better solution would be to warn the players that they're entering a restricted area and give them 3-5 seconds to leave, rather than immediately taking away the weapon (which has jarring effect on combat that often feels unfair). While this encourages more face-to-face combat between players, it does restrict play-styles that could add a different dynamic to the game.

Another issue with restricted areas is in the Push game mode. Push is a game mode from INS where the opposing team must capture three objectives in sequential order. The attacking team starts out with less spawn waves and can only gain more if they capture an objective. If the offensive team does capture an objective, that area becomes restricted to the defending team. Areas can be stopped from being captured so long as a defending team member is present in the area. A common strategy is to hide somewhere in the area and make it a stalemate. If you're on the defending team attempting to save a point from getting captured and haven't made it in time, it's very easy to get caught in the restricted area when it is captured. You're forced to watch enemy players come out of an area while you are unable to shoot. This could definitely play into the strategy of Push and how it is designed to be played, but it is a very frustrating feature.

Oh and PS- don't ALT TAB out of the game. Chances are it will crash. It also crashes from C4 sound loops and other weird sound loops, and again, this is incredibly frustrating.

Insurgency is going to appeal to the experienced FPS player. While the controls and basics of the game are easy to handle, the need for teamwork could leave newer players lost. Co-Op exists to help newer players, but doesn't have the same appeal as the PvP game modes. The player who is going to stick with this game is one who likes FPS games and is looking for a challenge.

Verdict and My Thoughts

There exists video evidence of me thoroughly raging at Insurgency, but that's something I do with every game. Insurgency takes time to learn. The maps are intricate (sometimes a little too intricate), the game modes are challenging, and you can't always use the M249 (play support, I promise). I liked this game because it's different from all the FPS titles I've ever played. It might not be outrageously different from the multitudes of FPS titles that exist and there are no giant fighting robots, but it does create a desire to play. Players aren't wrapped-up in stats and K/D. The fact that you can be the reason a game is won and go 0:4 is enticing. Teamwork heavily outweighs gun skill and that's what makes playing competitive FPS games fun. It isn't about outgunning your opponents, it's about out-thinking them.

The game does have its issues, but NWI is active in listening to the community and addressing problems that have arisen. They've already released their first patch to the game since the game launched and appear to be dedicated in making Insurgency a success.

Insurgency is available for purchase on Steam for $15.