Pixel Piracy has a pirate backdrop, but there are so many jokes about feces that I honestly believe the primary theme of the game is "everyone craps, and it will be on your boat." One of the mechanics of the game is that birds and pirates drop deuces on your ship. This is an actual gameplay mechanic that someone designed. Not only do they do so, they ONLY poop on your boat. Heck, you can even choose a "story arc" (a contrived selection that gives you some in-game benefit) in which your father's pirate name was "Poenpants." I almost want to say it is a real life adventure in the age of pirates: Everyone has dysentery -- even the birds. The good news is that while you're drowning in a sea of your own refuse (conveniently located in your only mode of transportation), you can teach—yes, I said "teach"—your pirates to poop better. This is like toddler training for middle aged men and women on how to properly defecate. Or like middle management HR training. Take your pick.

Not only can we use our Playskool Pottytrainer guide, we get to teach the NPCs how to clean said feces from the poopdeck. I would find the copious amount of references to excretion bearable if it actually served a function in game; in Pixel Piracy's current state, however, it does not affect health or morale, and merely acts as an aesthetic eye sore.

But fear not, for there is more! After you have taught your buccaneers how best to drop the kids off at the pool, you now get to pay them (the buccaneers, not the floaters), wage sea warfare, and teach them how to cook watermelons, which thus far has been the only viable way I could get them to eat it. Unpaid pirates will mutiny -- and they need to be paid often. The mechanics overall are fairly solid and can be enjoyable, once past the silly stuff. Part of the fun lies in building a ship, which can be done by buying parts at different islands in the game. The ship can be decked out with food storage, cannons, ramparts, and other seaworthy devices to ensure that Captains get the most bang for the buck. Upgrading pirates to be more efficient at mayhem and murder is a ton of fun, though the combat left me craving for more. I'm sure if I didn't die on the fifth or sixth island consistently from starvation or mutiny I would have found a lot more that can be done. 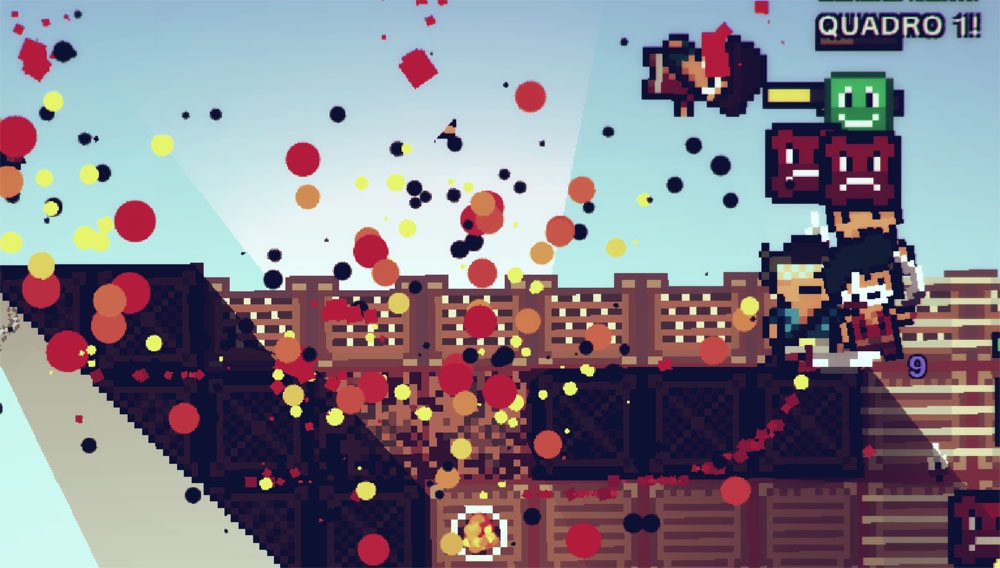 A word of warning for those willing to brave the mighty brown ocean: Read the tutorial. Without reading it, you'll have a very difficult time getting your pirates to do even the most basic of tasks -- like moving from your boat to the island. Learning how to feed the crew is of utmost importance, and ensuring their payment is timely will help to keep morale high. Combat can be a nightmare if you don't learn to rotate your crew between ships to keep them alive; however, after killing off another pirate's vessel, you can plunder it or take the ship for your own. Doing so increases the amount of money gained for upgrades. It is also important to know that you level up during travel between map points, so making full use of this is imperative to success in the high seas.

For a game that is still in development, Pixel Piracy maintains a lot of promise. If the dev team removes the abundant references to feces from the game, it has the chance to enthrall retro gamers for a long time to come. Building ships is great, combat is well done, and there is a lot of challenge, even on the easiest of settings. If the devs continue down the path they have chosen, players will find themselves wading through a lot of crap to get to the gold below, and for most it may just be too juvenile to handle. I'll wait to see what Quadra Delta does before making any final judgments -- I just hope that Pixel Piracy gets the attention it needs to be considered a good indie title, and not just another turd in the waters.