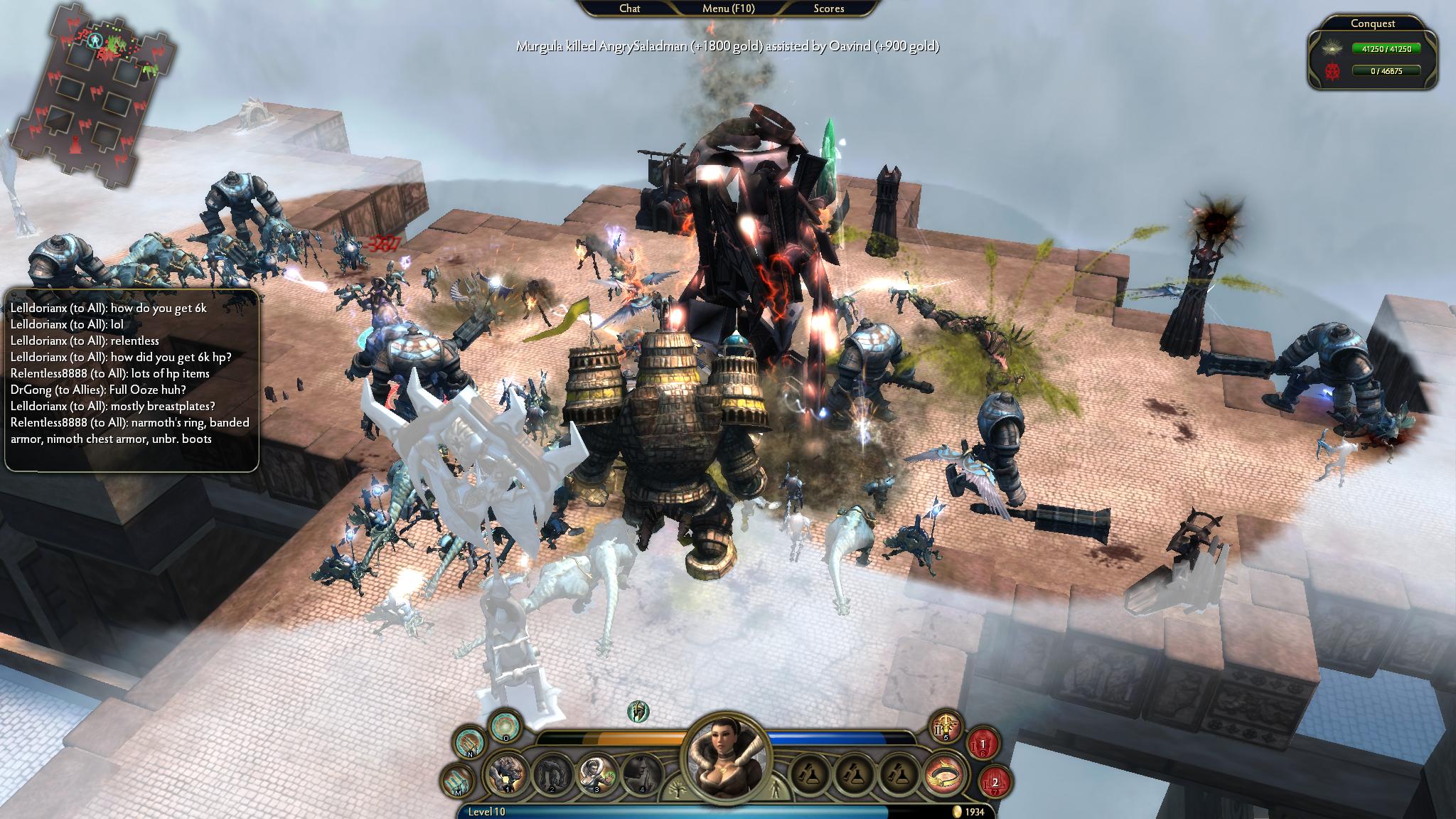 The RTS scene has been stagnant in the face of StarCraft II. Hardly any major titles have been released in the past year, save for maybe Empire, and Strategy is desperate for a resurrection. Demigod attempts to breathe life into the genre by taking a new twist on a mod for WarCraft (not the world thereof), called DotA - Defense of the Ancients. Yes, Basshunter sings about it. 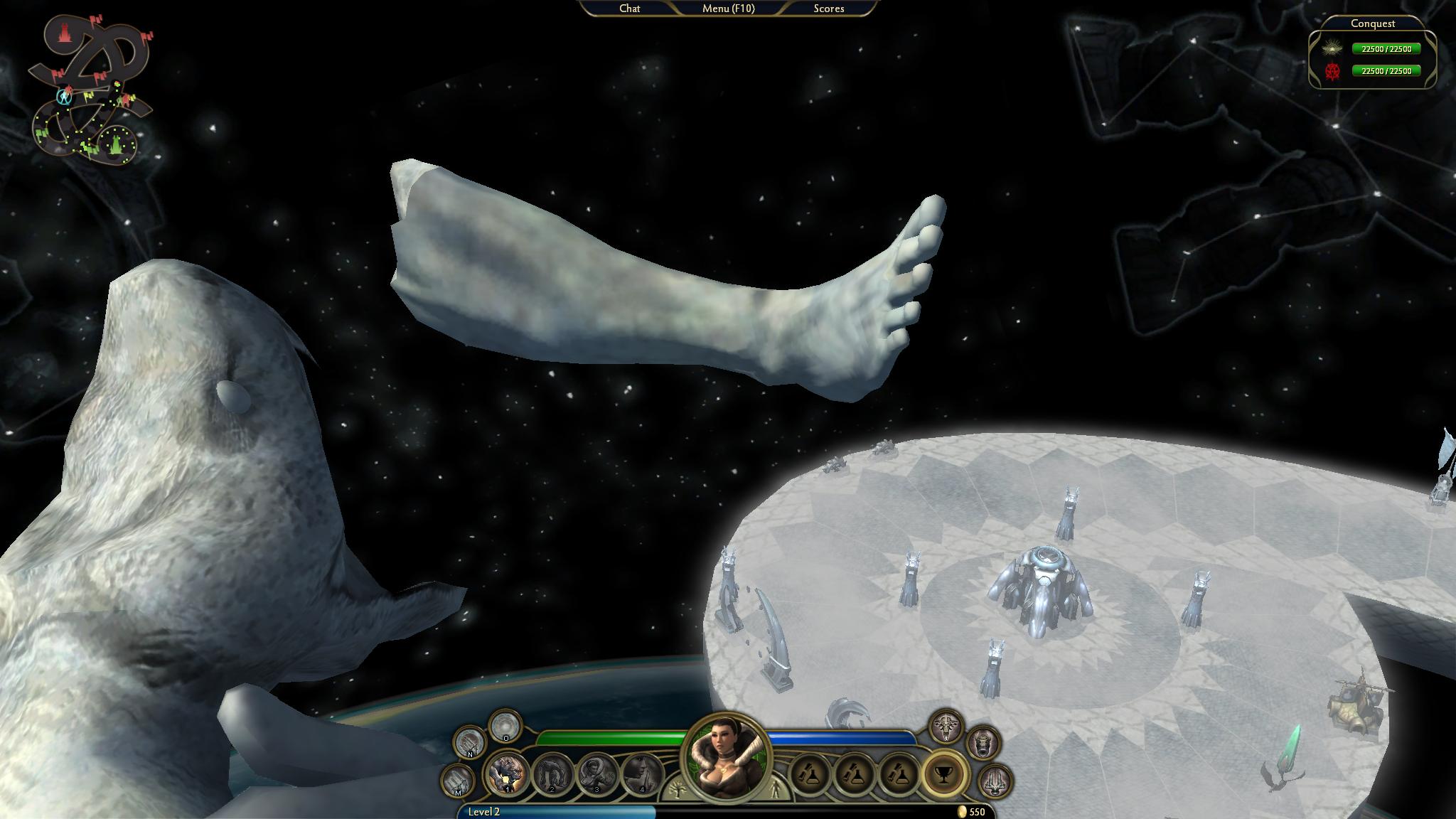 A God has fallen in the Pantheon, and you, playing as one of eight demigods, will rise to take his place. The Demigods are pit against one another in an arena, where teams sizing from 1-5 players will battle to take the fallen one's seat in the Pantheon. The focus of the action is on the demigods, who act as heroes in the thick of an RTS-style battlefield. The demigods, controlled by players, level up at their own pace by killing creeps (minions) that teleport into battle through portals at timed intervals. Demigods also level up by killing buildings or other demigods, however the most effective way is to slay the weak minions. Each side starts with at least one or two portals (depending on the map) where creeps spawn. The spawn group can be upgraded to have more health, damage, and even new units added to the waves of troops. At first, they do little to the opposing team other than feed them, but later on you rely on your minions to push forward to the Citadel. The Citadel, the equivalent of Town Centers, Command Centers, and MCV's, has the ability to upgrade buildings, units, and demigods. Some upgrades add a mint to increase gold production, increase the amount of XP gained by demigods, add an auto-heal to towers, or add new units to the waves. Giants, Angels, Priests, and Catapultasauri (effectively dinosaurs with catapults on their tails) can be added to the waves, each with a unique ability to push the enemies back. 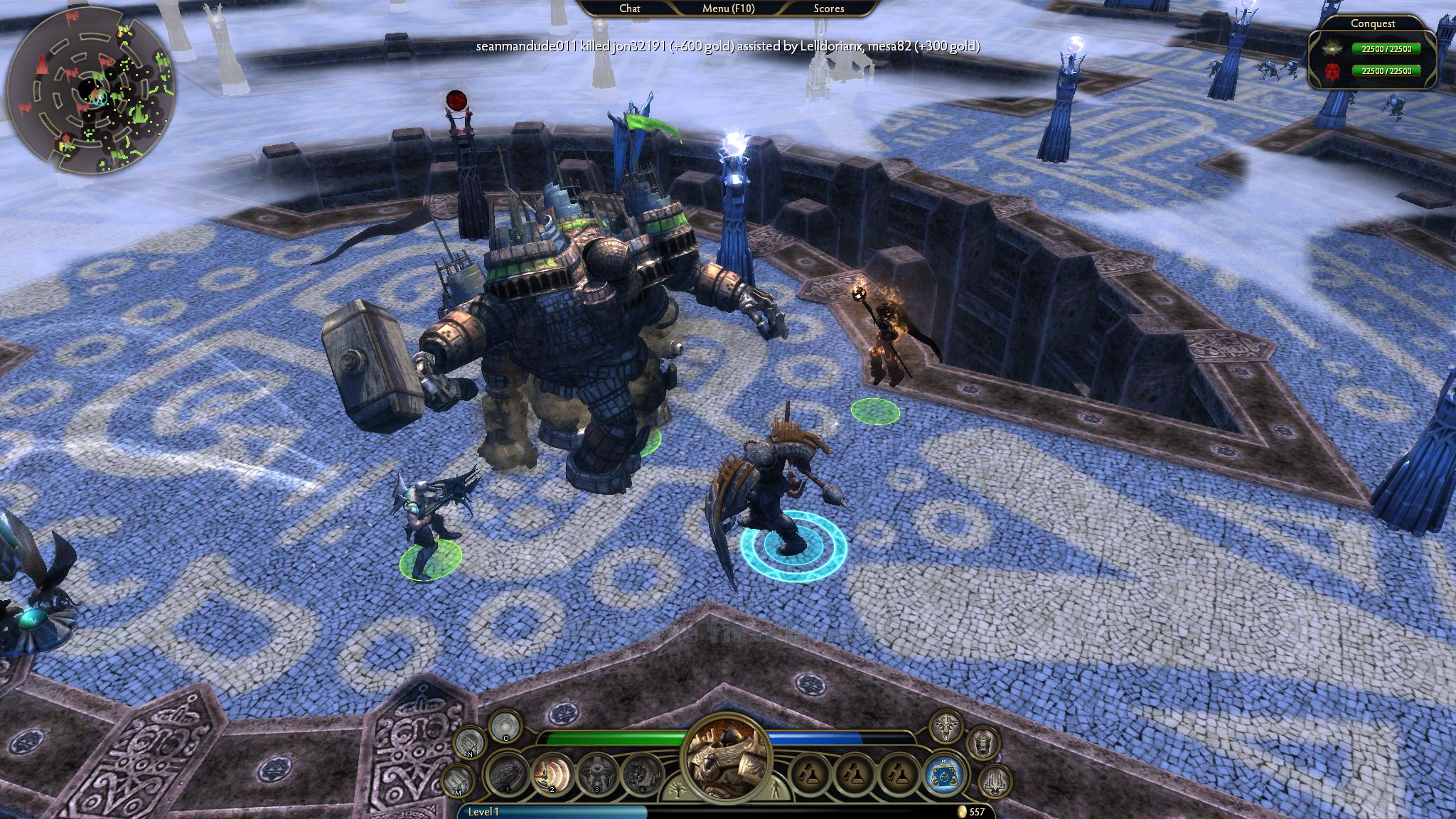 There are several different objective-based game modes, the most common being Conquest and Slaughter. In Conquest, the teams go at it with the sole purpose to wipe the opposing team's Citadel from the map - although this is an option to achieve victory in all game modes. Slaughter is a common 5v5 game mode where players plot to obliterate each other, racking up enough demigod kills to win the game.

"Enough about all these modes and minions and citadels! Tell us about the demigods!" you say. I'm very happy to inform you that the current eight demigod options are going to expand in the future, as the developers (Gas Power Games) have announced the addition of a new demigod every month or two. There are two sets of demigods: Generals and Assassins. You either get right up into the action and stay there, poisoning, smashing, and scorching other demigods to the nine hells, or serve as support, crowd control, and an additional wave of (stronger) minions. You'll find the following archetypes for the current demigods: Nuker (Wizard), Sniper (Ranger), Tank (Rook), DPS/Poisoner (all previous are Assassins, all following are Generals), Paladin, Healer, Syphoner (Vampire), Druid.  All of the demigods have their own unique flair, while a couple stand out as truly new entities. Take Rook for example. Rook is a castle... with legs. As you level up Rook, granted you can take multiple different ability paths, one of his core "skills" is the ability to construct trebuchets, archer towers, and prism towers (called the "Tower of Light"). Rook can also "eat" other towers and structures on the map - even his own towers that he builds - to reconstruct himself, thus gaining health. Of course, Rook also has arms, somewhat of a face, and a bigass battlehammer that sporadically sends minions spiraling into oblivion. An assassin, Rook is most commonly played defensively, as he can construct his own towers to slow demigods and smite hordes of minions, though I found he is best played offensively. Slamming down the Hammer dishes out some serious damage, Rook also carries around his personal bowling boulder to squash minions and stun demigods, and when played right, has massive health. 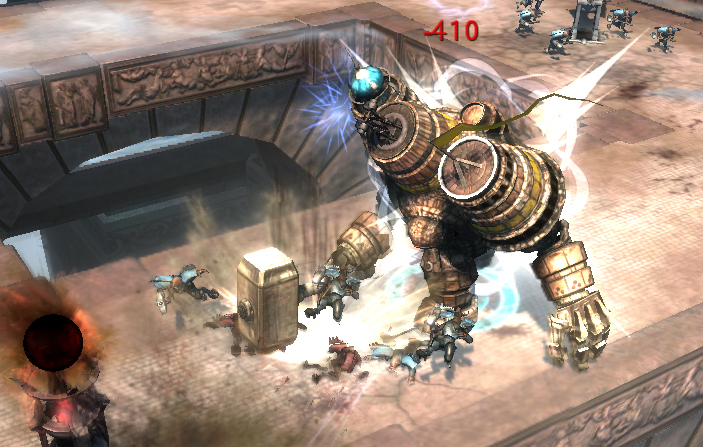 On the other hand, there are less creative (although somewhat funny) demigods, like the tittymonster. The Queen of Thorns, an all natural druid, calls upon the power of nature to support herself and her allies by summoning damage absorption shields and shambler treefolk. Each archetypal hero/villain has their own playstyle focused on the character, and the game is almost perfectly balanced. Often we (my clan on vent) find ourselves saying, "Unclean Beast is hard to beat," minutes later we can be heard adding, "Oak is  tough," until we finally realize, "Damn, they're just all hard to beat when the player is good." This revelation means the game will stay fun since there is so much skill involved, and few overpowering problems - except in the case of one or two demigods. 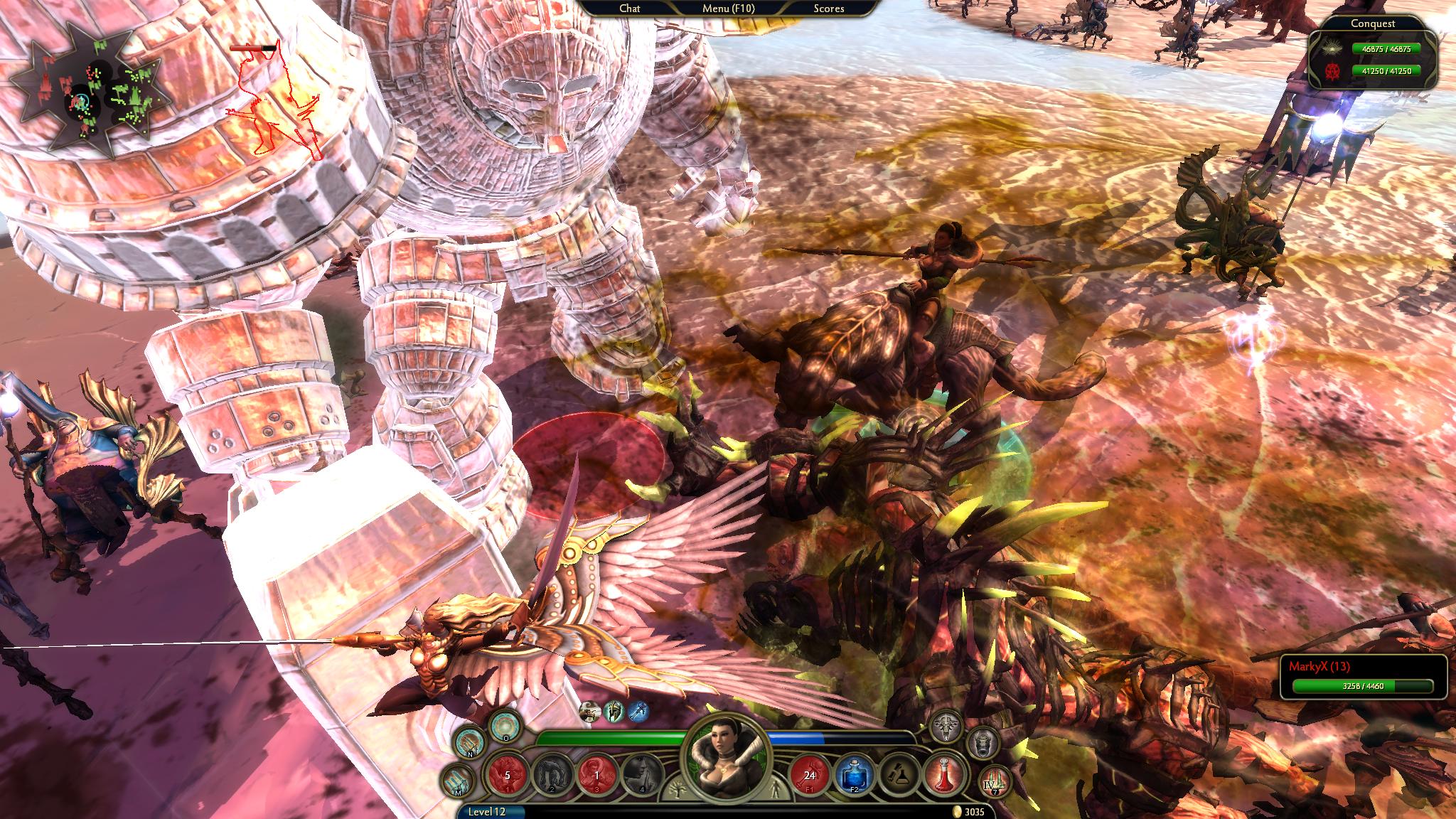 Gameplay is entirely based on teamwork and multiplayer. Don't expect yourself to have lots of fun against the dumb or cheating AI, this game was made for Multiplayer. Constant fast-paced action keeps you focused and pumped up. You won't be brb-ing to grab a drink "real quick" or get the phone, because your team needs your full attention. The game is heavily based on gold income, to the point where you feel addicted, making it impossible to sit in base for too long, else risk sacrificing your upgrades. Gold is used to purchase healing and mana potions, breastplates, helmets, boots, and more to increase your character's stats. Other items in the game include Favor Items, bought with achievement points and unlocked individually.  These stat boosters can be manipulated in a way that players can be incredibly fast, untouchably strong, or unbelievably high HP. The teamplay element is the core one here, and feel free to jump on our ventrilo or one of a number of community vents to play the game as it is meant to be played. 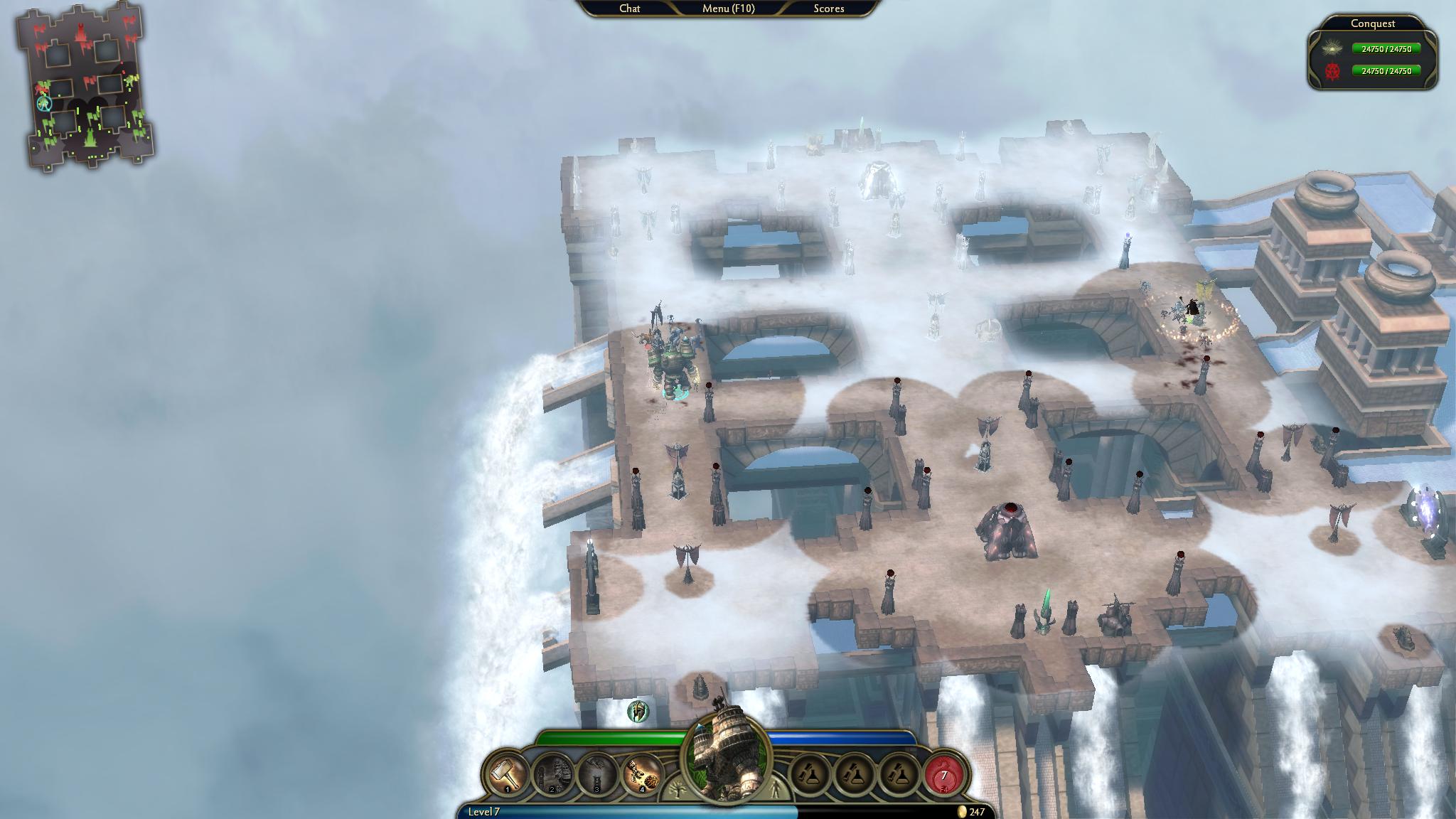 Demigod does have its fair share of bugs, though. Actually, it's the kid at the buffet who decides he wants to go back not only for second breakfast, but also for third breakfast. Many times I have found myself slamming the mouse button as fast as I could to get my character to move, yet he sat still. They seem to glitch up randomly for 10 or so seconds and remain motionless, often the death of you. Maybe the DGs are just drooling at something - Queen of Thorns? On one particular map, called Crucible, players may find themselves frustrated with the fact that Generals with a certain Favor item can teleport from spawn to a gold mine. This may not sound like much, but it can be a difference upwards of 30-45 seconds, enough time to take two flags and leave before the enemies arrive. Other bugs, most of which have been squashed with recent patches, were with the addition of Random choice. Yes, you can opt to randomly be assigned a demigod, however up until mid June, this option prevented multiplayer games from launching. The worst bug of all is with lag, and it is extremely rare, but our Staff Writer Space_man has stumbled into it. For no reason at all, a game will freeze completely for a few seconds every couple of minutes, regardless of PC or Internet connection (seemingly). We have not been able to troubleshoot this problem yet, although we've failed multiple times trying. It is our assumption that Hamachi may fix the problem.

The game overall is amazing. Thousands of copies of the game were pirated, which really hurts a company that needs our support most. StarDock and Gas Powered Games work tirelessly to bring us new updates every week or three, including not only bug fixes, but complete patches that add new playable demigods. That's huge! How many other RTS's will patch a game with a new race/nation for free? The Demigod website, www.DemigodtheGame.com, has a full-featured forum and community where you can share thoughts with the developers on what should be included in the game. Several of these ideas have been added after recommendations from the user base. They don't even have DRM. Why wouldn't you support a developer like this?

The Good: Eight entirely unique demigods, completely balanced maps, and new addons every couple of weeks. Games can be found quickly and start just as quick with the functional and flawless game browser, which cannot be said for most RTS's. Use of Impulse instead of Steam means no DRM is on the game. Fast-paced and constant action will keep you in the thick of things while your teammates rush to your aid.

The Bad: Poor launch due to piracy. Still some bugs with logitech drivers and other things. Not as many legit players as pirated players hurts the community.

Overall: The companies that support Demigod are both fantastic at what they do. Stardock, makers of Sins of a Solar Empire, has the experience and weight to back Gas Powered Games' new creation. The game is such an anomoly in playstyle that it is simply something you cannot miss, especially as an RTS enthusiast. I'll be playing this even in the aftermath of StarCraft II, and I recommend getting it.

Update (2010): The online community is nearly dead, filled only by the remaining good players. Playing with friends is looked down upon as "pre-made," making it almost impossible to join a game with friends. This game is no longer recommended since it is entirely online. There can be no online game without a good community, which StarDock seems to have betrayed.