Some of our readers may have only heard of The Wolf Among Us, so here’s a quick synopsis: Telltale Games, the creators of The Walking Dead games, deliver an adventure series based on the Fables comics universe. Players go about Fabletown as sheriff Bigby Wolf (the human form of the Big Bad Wolf) and, through quicktime action scenes and rich dialogue with other fairytale characters, bring the terrors of Fabletown to justice.

Because this is the final episode in the series, our review below naturally contains some spoilers for Episode 5 and the rest of the series, so proceed at your own risk. Please also note that this review is based on the linked series of events in my particular playthrough. 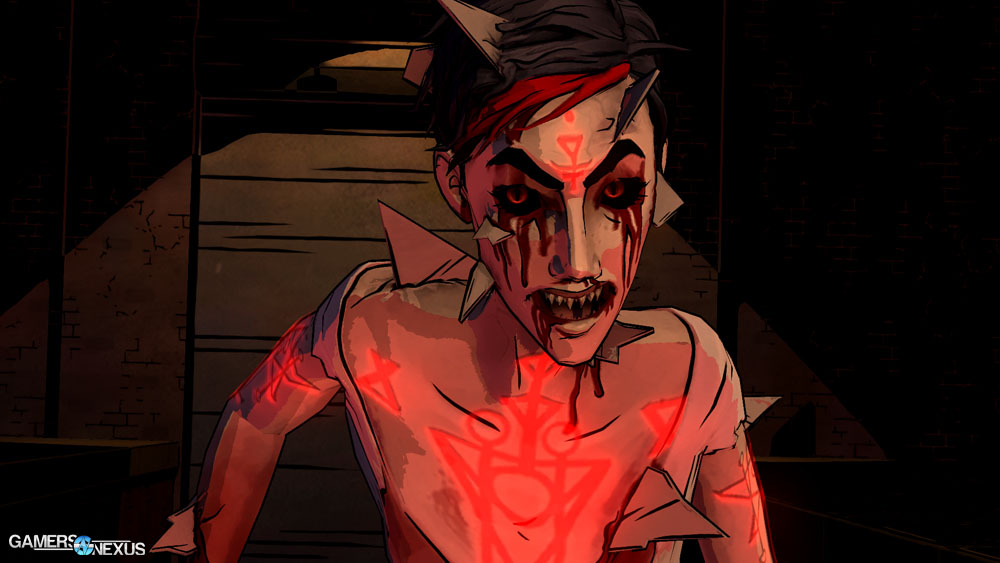 Telltale pre-loads Cry Wolf by showing a series of flashbacks to key decisions the player makes in Episodes 1-4. This is an effective way of showing the player’s evolution or troubling inconsistency in handling Bigby Wolf’s most dire situations.

Cry Wolf picks up from the end of In Sheep’s Clothing, with Bigby in The Crooked Man’s hideout. The Crooked Man emerges as a frail, enigmatic figure who bears stark contrast to the other villains from the series (many of whom are in the same room). He speaks calmly and takes a while to get to his end-game, forcing players like me to fill up with tension and wonder “what the hell does this guy want!?” Surely enough, that tension and the retorts from the surrounding villainous crew lead to a well-scripted brawl.

If I recall correctly, this is the first time Bigby takes on multiple foes at once. Telltale has some fun with this scene by giving Bigby small tussles with Dee, Jersey Devil, and Georgie, whom some of us chose not to beat up earlier in the series. The conflict continues into the streets as Bigby, now in his werewolf form, chases down the Crooked Man’s and Georgie’s cars. He dodges oncoming traffic and leaps across rooftops, keeping the action frantic and cinematic. 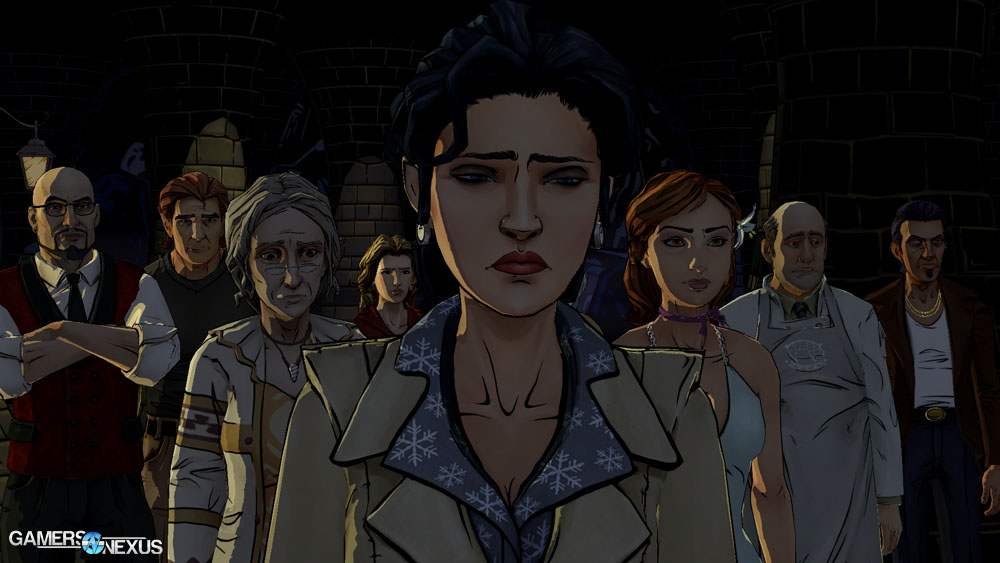 There are two paths from the end of this chase, and thankfully, I took a break from the action by choosing to interrogate Georgie at The Pudding and Pie. It’s here that Telltale reveals why the murders have been happening all along, which relieved me since In Sheep’s Clothing seemed to dance around the subject. There are a couple of twists to the plotline here and, although I could see them coming earlier in the episode, they make for a more logical way of tying the series’ overall conflict together. A helpless Georgie unveils everything he knows while directing his hate at Bigby’s inability to see the results of his actions. Georgie’s departure is certainly one of the best in the series...

...although it’s certainly not the most contested. While seeking out the Crooked Man in a manufacturing plant, Bigby encounters perhaps the series’ most imposing villain -- Bloody Mary. Bloody Mary’s transformation into a bleeding zombie-like figure with broken glass shards piercing her entire body is certainly gruesome, but we don’t see much of how she takes on that form -- unlike Bigby where we see his eyes glowing or his claws at the ready. Nonetheless, the bout that ensues takes on a greater scale than other combat scenes and leads to Bigby transforming into his “mega” form. I found this scene fun to participate in, but I thought it felt out-of-place because Bigby’s real nemesis in all of this is the Crooked Man. Bigby’s final form is also less limited in motions, and although it has an “ice breath” ability, it sort of resembles a Pokemon critter more than a house-destroying werewolf.

Bigby eventually gets the upper hand -- or paw -- on Mary’s assault and has the option of bringing the Crooked Man alive for the Fabletown folks to decide his fate...or killing him right there on the spot. This might be the most critical choice of the series, so the following scene may be very different for players who immediately crack the Crooked Man’s skull.

I chose to let Fabletown see the Crooked Man for the monster he is through an in-person trial. Telltale does an excellent job of writing the Crooked Man’s reactions and reasoning. He cleverly twists Bigby’s words to make it look like the rest of Fabletown is guilty for its decisions -- and that Bigby is the wrong symbol for justice. He certainly has a point; when I look back at the rest of the series, I can clearly see how the townsfolk initiated the tension and violence among each other. They unfortunately don’t quite come to terms with it in this scene since they want an outcome right there.

Nonetheless, The Crooked Man’s perspective challenged my ability to find fault in his intentions and communicate that to the townspeople. What was particularly effective was how the Crooked Man recalled some of Bigby’s (my) violent decisions and used them against him to indicate the real threat to the town’s safety. I think this moment came in too late to capitalize on his momentum when deflecting initial accusations, but it did shed some light on my experience with the series. Nothing in Fabletown had gotten better as a result of my actions. 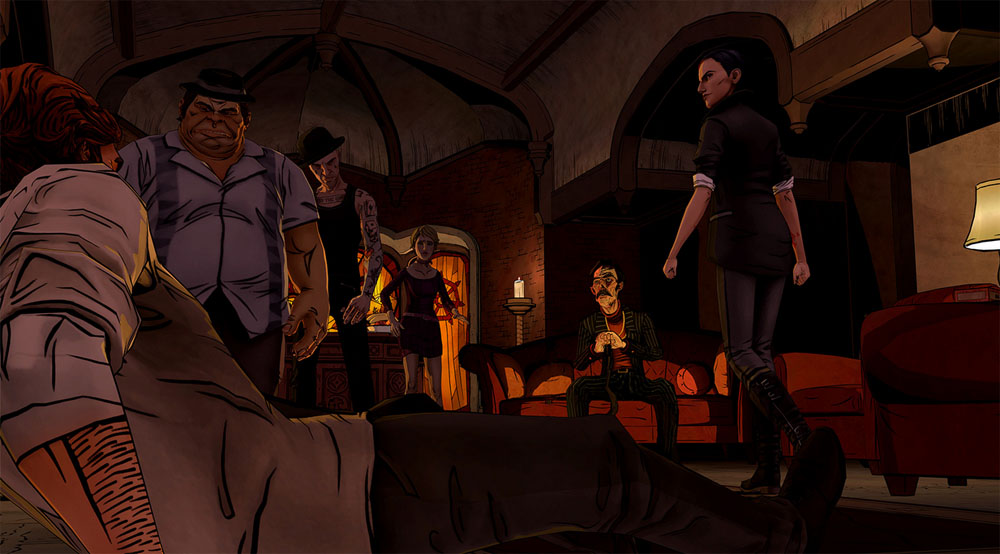 At the end of it, the Crooked Man correctly states that no one had any hard evidence proving he ordered the hit on Faith and Lily -- not even...nah, I won’t spoil that part. The final decision was not one I wanted to make. As much as the Crooked Man deserved punishment, the whole town needed more than just a lesson to hold itself accountable. However, I’m satisfied by this outcome because it relates more to the series’ dynamic of interacting with the townspeople and making key decisions around their fate and perceptions of Bigby.

It’s because of this that I hope The Wolf Among Us continues as a new season of episodes. Telltale Games already has some great characters to work with, like The Woodsman, Holly, Grendel, and even Buffkin, so they have a lot of momentum for future adventures. I’m sure a lot of series fans would like to carry over their relationships from this first set of episodes to deepen the different side-stories as well.

It’s been an intense and stimulating wild wide through The Wolf Among Us. Telltale Games has capped off the series with an ending that pulls at my emotions in the right way and leaves me thinking about the different relationships and decisions from previous episodes. The conflicts are grand and, for the most part, give us the satisfaction of taking down the last standing scum of Fabletown. And while all seems less chaotic in Fabletown, Telltale has quite possibly opened another creaky door for Bigby to walk through.