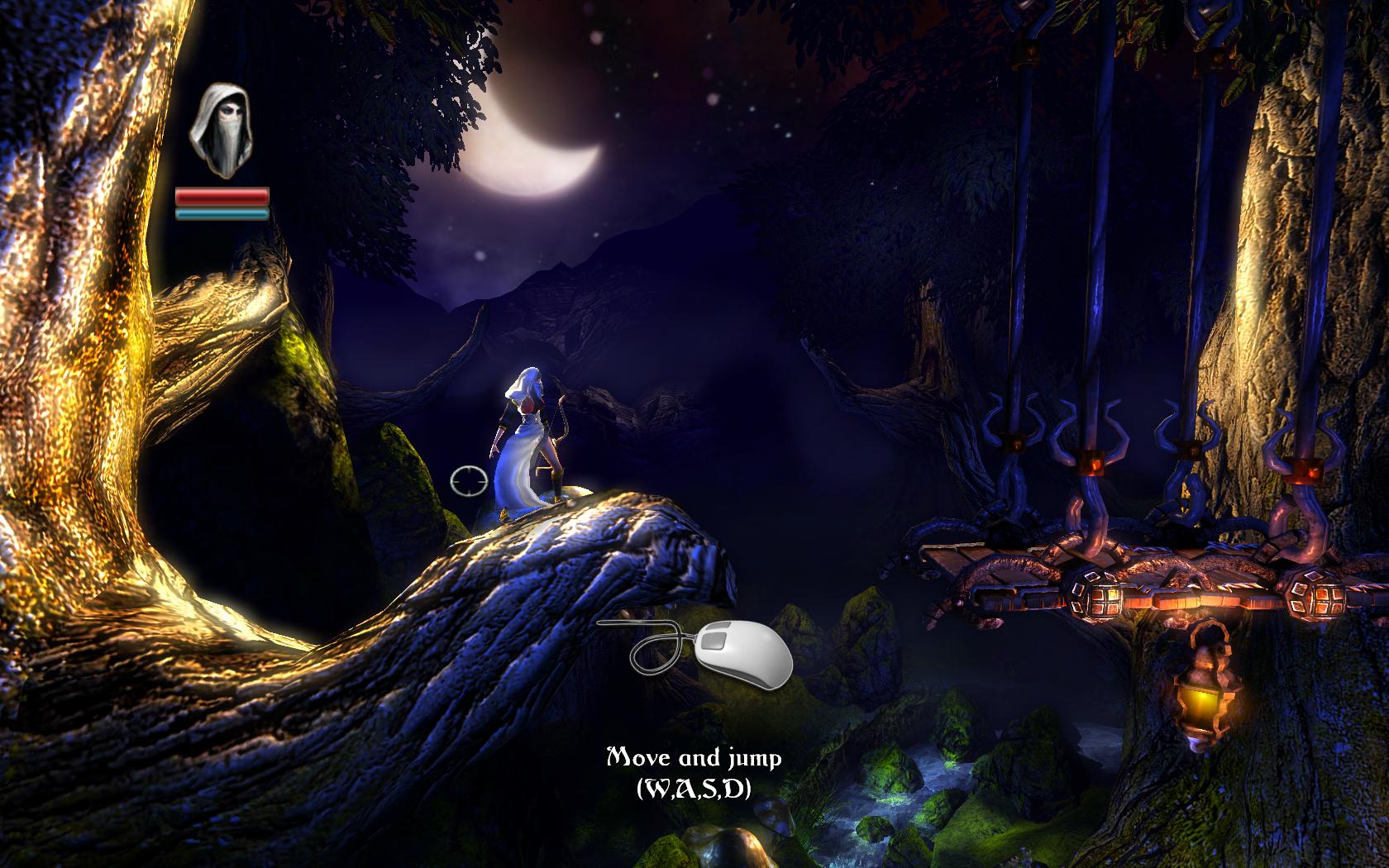 Move over Mario, there's a new kid on the block.

Platformers like Donkey Kong, Super Mario Bros., and Battletoads set the foundation for the modern gaming industry. Now, over 30 years later, Frozenbyte freezes us dead in our tracks with a cool, reinvigorated take on a dated genre.  Trine, both an artistic masterpiece and a gameplay phenomenon, vies for its place in an X/Y/Z market by introducing a new twist to the platforming world.  Players take not one, but three dysfunctional heroes on a quest to restore order to a region dominated by Undead and Evil.  It's nice to have a storyline other than "save the princess, until next time" for once, but that's not all that gamers will look forward to: similar to Donkey Kong Country, the player switches between one hero or another depending on the current situation. 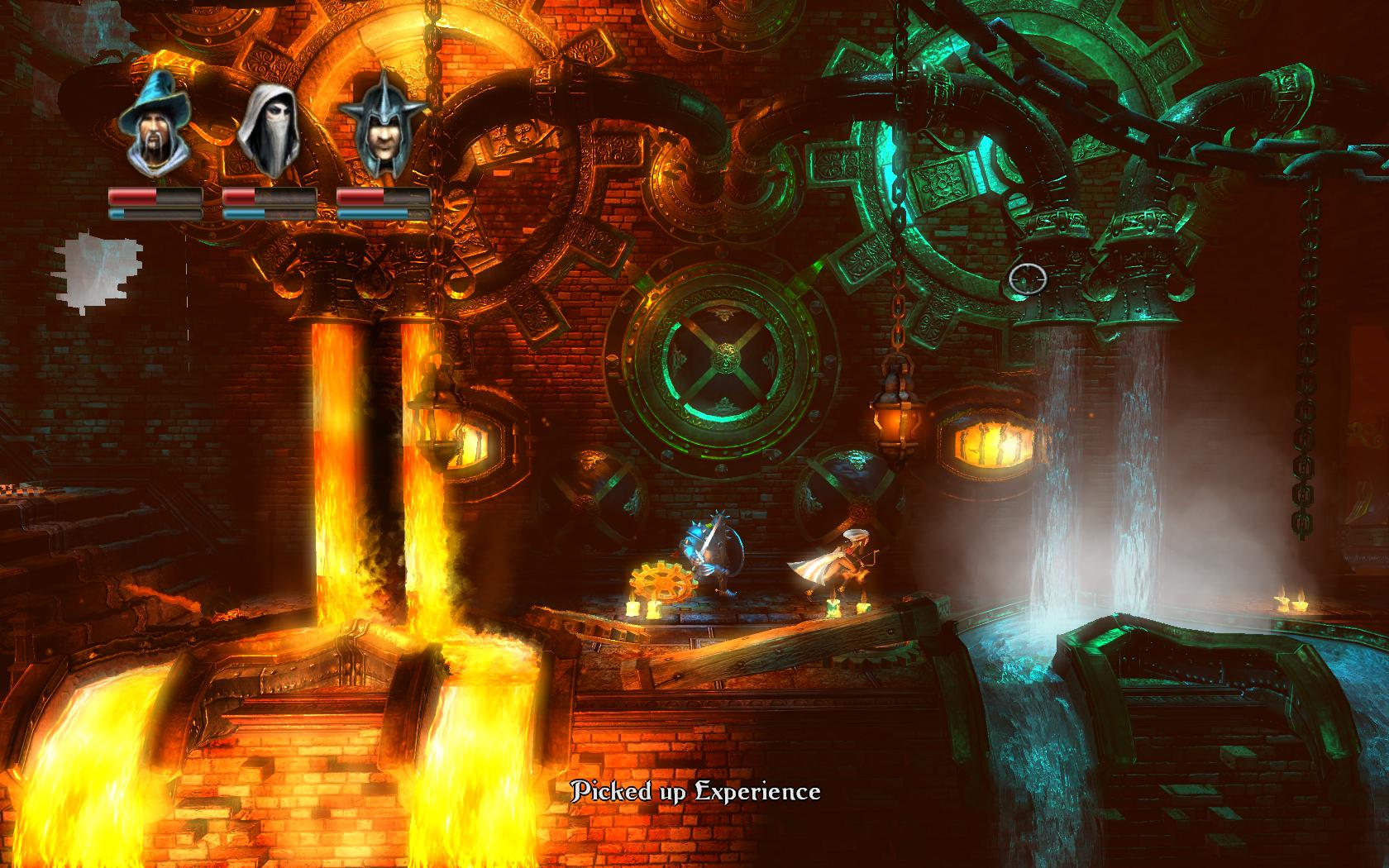 A wizard, rogue/ranger, and fighter build off of each others' abilities to bypass one obstacle after another.  The wizard summons a bridge over a deadly pit of spikes, the fighter smashes through planks and skeletons with an electrified hammer, and the rogue grapples from platform to platform in seconds.  What's even better than doing it all yourself?  Inviting a friend or two over to take the reigns of a gamepad (or other peripheral) and playing with all characters active on the screen at once.  You might even find it entertaining, as host, to offer your friends a lift (the wizard can levitate blocks upon which players stand) over a trench filled with acid, before releasing the box, and its rider, to their doom.  It won't get you a medal for teamwork, but it's definitely worth the laugh.  That's the other thing with Trine - we found ourselves laughing the entire way through - be it at the fighter's one-liners or simply from 'accidentally' murdering one another. 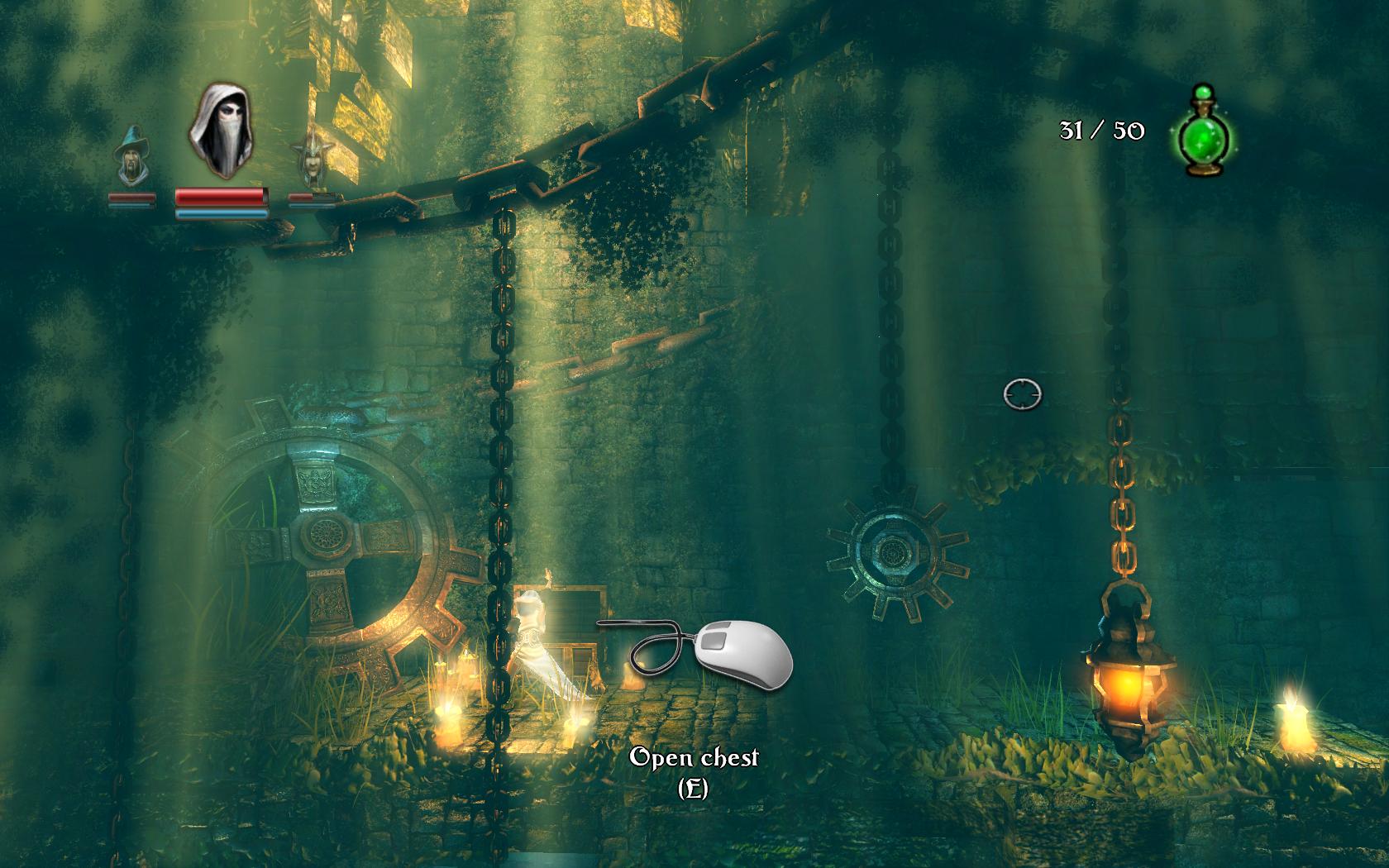 The environs showcased in Trine offer beautiful scenery and unsurpassed (in a platformer) eye-candy.  Remarkably well-done bloom effects, cascading sunlight, and truly foreboding dungeons are encountered during our journey.  Though it's not all just looks, Trine's level design flows brilliantly and utilizes each of the three characters at an equal rate.  Being able to grapple over obstacle after obstacle without ever touching the ground if you choose the thief, "draw" your way through the level with summoned crates and bridges as the wizard, or slam seesaws into a spin as the fighter add endless possibilities to each stage of the game.  Oh - and don't forget about the RPG element!  That's right, Frozenbyte included items, treasure, skills, and levels to be had in Trine, making the first run through thrilling with each unlocked weapon or ability. 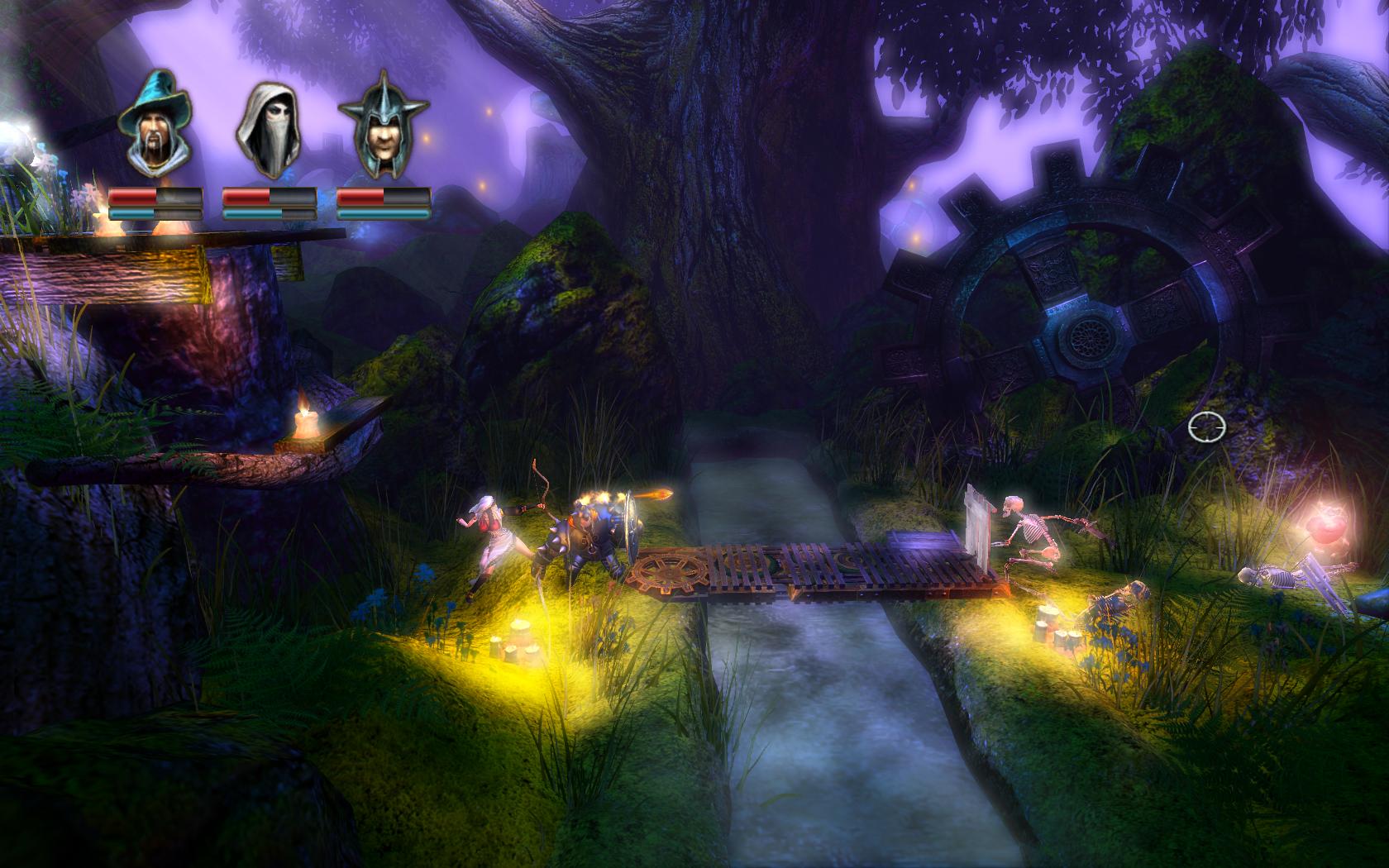 "Wait!" You say, "earlier you said that I could 'draw' objects to use as platforms.."  Yes, the wizard's primary role is to draw boxes, bridges, and floating platforms to safely navigate around certain death.  With each level, the wizard can have more of these items active simultaneously.  An example would be as follows:  There's a pit of acid too long to jump, there are not any surfaces to which the thief can grapple, and the fighter certainly can't just tank the damage.  As the wizard, you can cast a box (by drawing a square with the mouse) on either end of the pit, and then draw a bridge connecting them, giving your group a way of passage.  Or you could just ragequit and jump into the pit, which I did several times.  For some reason, dying is not an infuriating experience like in many other games. 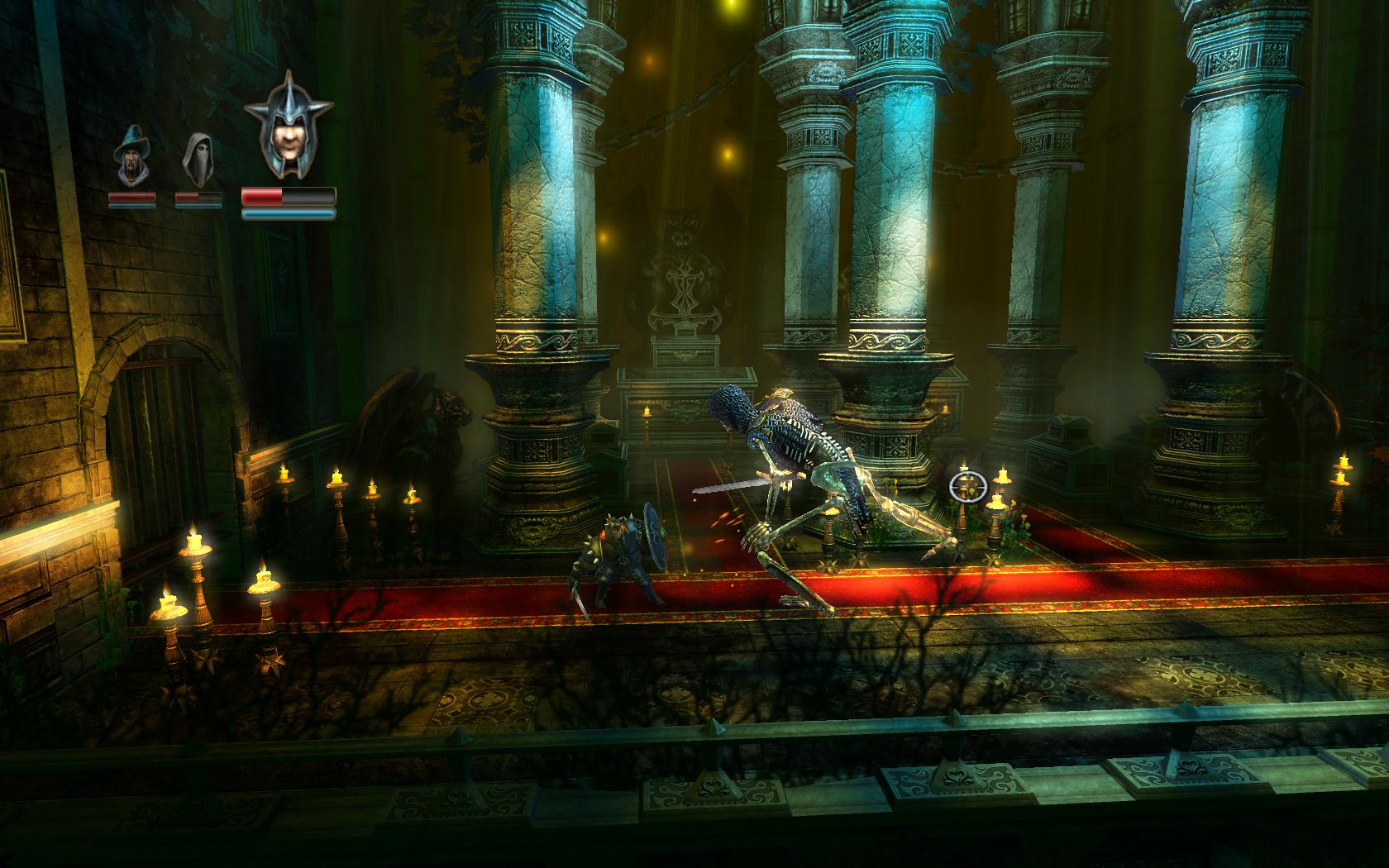 The most fun I had throughout the course of the game was when the thief's grappling hook was implemented.  With a running start, she can leap, grapple, and swing from one wooden platform to another.  After beating the game, a great challenge to present yourself with is a speed challenge: see how quickly you can beat a level, as seen below in a video.  The physics behind the thief's swinging are fantastic, and being able to gracefully fly over fireballs and skeletons without ever touching the ground is a great way to show that off.

Thirdly, Pontius, a horizontally-challenged fighter-type, can be heard complaining about his desire for food the entire campaign.  He's a proper knight, after all, and needs food to sustain his hammer-swinging, shield-raising, and bull-rushing properties.  Unfortunately for him, the knight is a bit too heavy to swim, so the least likely time you will be using him (unless you want to reach the bottom quickly), is in the water.  Other than that, he plays an important role as the tank and as the thief's support.  The knight's shield can be deployed in front of the thief, to protect the both of them from missiles, while the thief vollies an explosive arrow into the skeletal minions.  Separate from that, Pontius is a powerful ally to have when battling bosses that are two times your size.

After thorough testing, the only immediate short-comings I can complain about are the price-point and the multiplayer support.  Currently, a couple of Trine's levels are nearly impossible to play with two players, let alone three.  An example being the last level of the game, where players race to the top of the level in an ice-climbers style mission, else meet their doom - and unfortunately a second player will slow you down.  Aside from that, a $30 asking price, although in retrospect well worth it, is steep enough for an indie game to turn players away.  For about 24-hours of on-off playing the first time through, though, and for such a professionally crafted platformer, it is worth 30 bucks for sure!

The Good: Fantastic locations, innovative controls for the wizard, required teamplay (self-implemented or multiplayer), replayability through the roof.  Future promises by Frozenbyte to introduce online-multiplayer support means that this developer is willing to back its game.  A strong community frequently posts time-trials and challenges to players.  Amazing soundtrack and effects. Fun with friends or alone.

The Bad: No online-multiplayer currently included.  Not all levels are co-op friendly.  Price is high enough to scare some buyers away.

Overall: Great music, graphics, gameplay, and level design are all key elements in a game, and Trine delivers on all of them.  Highly recommended purchase, even at $30.  You may want to wait around for a sale or price reduction, a $10 reduction in price would make the game a fast seller.  New gameplay mechanics and controls make the platformer inviting and certainly should entice earlier generation gamers to return to a genre they loved on their Atari, in the arcade, or on their NES.
Last modified on August 06, 2009 at 2:49 am