Aaru’s Awakening, a hand-drawn sidescrolling platformer from independent Icelandic studio Lumenox Games, offers a tight core gameplay that is challenging, but fresh enough for players to want to pursue completing the game. It’s not as punishing as other indie platformers -- like Super Meat Boy or Volgar the Viking -- because, for one, Aaru’s Awakening gives players infinite lives, but it also makes players stop to assess obstacles and enemies. The game can be frustrating in some parts and it doesn’t always progress smoothly in difficulty, but overall it’s a platformer that has its place among others in the genre.

Aaru’s Awakening has been designed in the Unity engine, one that has welcomed dozens of different games such as The Forest, Hearthstone, FORCED, and Legend of Dungeon. The art style takes on a hand-drawn presentation, much like Child of Light and the upcoming Ori and the Blind Forest. According to Lumenox Marketing Manager Jóhann Guðjónsson, Aaru’s Awakening draws on 1970s and 80s animated cartoons and films, like 1981’s Heavy Metal. Environments vary between the four distinct worlds, offering their own rich combinations of shapes and rich color palettes.

The storyline is fairly straightforward and presented as an illustrated storybook. Aaru has been summoned by “Dawn,” a god, to resolve the betrayal of rival god “Night” and his followers, “Day” and “Dusk.” Aaru is an otherworldly creature, a smaller yeti-like baboon, who can bash and teleport his way through environments.

Mechanically, the game is fairly simple but takes getting used to; fortunately, the initial levels are shorter and not as challenging so that players can get acclimated. The gameplay mechanics are simple. Players use the mouse to aim the direction Aaru can bash and teleport (right thumbstick on a gamepad). Pressing the “bash” button sends Aaru crashing through stacks of boulders and rubble. Aaru teleports by firing a projectile and teleporting to the projectile (mark / recall). Teleport projectiles can deflect off surfaces and land on enemies, whereby teleporting in an enemy’s position results in a telefrag.

There is significant variation among the ways players traverse from one side of the level to the other. The game’s various obstacles challenge players’ abilities to properly time jumps, bashes, and teleports -- often linking them all together to get out of the most perilous moments. Frequently while sliding down a ramp or bashing through some rubble, a new challenge -- a gap, a new enemy -- will present itself and force quick thinking. I had my share of “I did not see that coming” moments just after I found the correct angle to shoot my teleport projectile or climbed up a series of platforms. That said, the game’s infinite lives and frequent checkpoints make overcoming these moments more fun than cumbersome.

Boss battles are particularly challenging and less linear. When battling Day, I had to teleport through about a dozen different targets to manipulate the environment. Upon completing a particular series of targets, the level opened a target that, upon teleporting, would generate an alternative level with a particular challenge. For example, one challenge world involved a windmill of heat beams that Aaru had to continue dodging through well-timed teleports. There were three challenge worlds in the overall boss battle, adding to the game’s otherwise linear objective of bashing and teleporting across a series of obstacles.

I had two gripes about the boss battles. First, the game does not clearly communicate to the player that the targets in the boss battle are actually a series of challenges that the player completes sequentially (at least, not in an easy to understand fashion). The other big gripe was that, in the heat-lattice challenge in the Day battle, there were several times in which I spawned into an enemy and was instantly dead, and figuring out the objective of that challenge was overall cumbersome. Fortunately, the boss battles include checkpoints upon completing each challenge.

A more general observation I have is that the progression of difficulty is not always consistent. A given level may be easier than the level before it, and then subsequently, the level of difficulty might ramp up significantly to the next level. This interrupts flow and momentum. 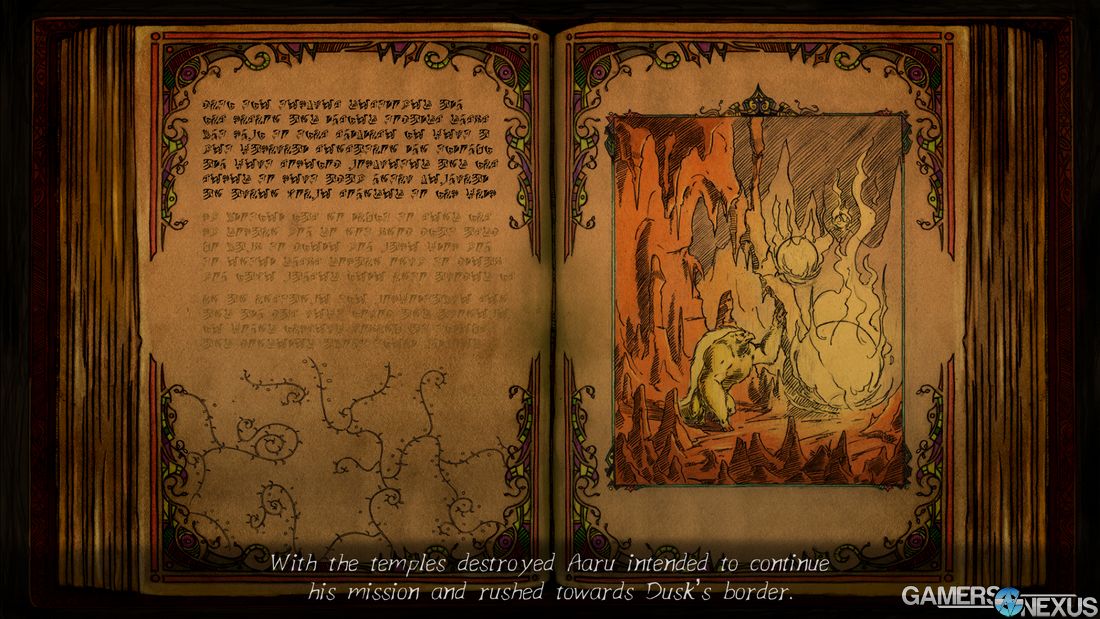 Those shortcomings aside, Aaru’s Awakening is a beautiful, creative platformer that’s challenging in the right ways. It’s a short playthrough for those with platforming expertise, but with active leaderboards, it invites replayability. With simple mechanics that differentiate from the “press A to jump” monotony of most platforming titles, Aaru’s Awakening makes enough of an impact to stand alone in its genre.