Oh brother to brother, all the blood runs red. Don't roll over, don't play dead. We're all livin' on the Mirror's Edge. 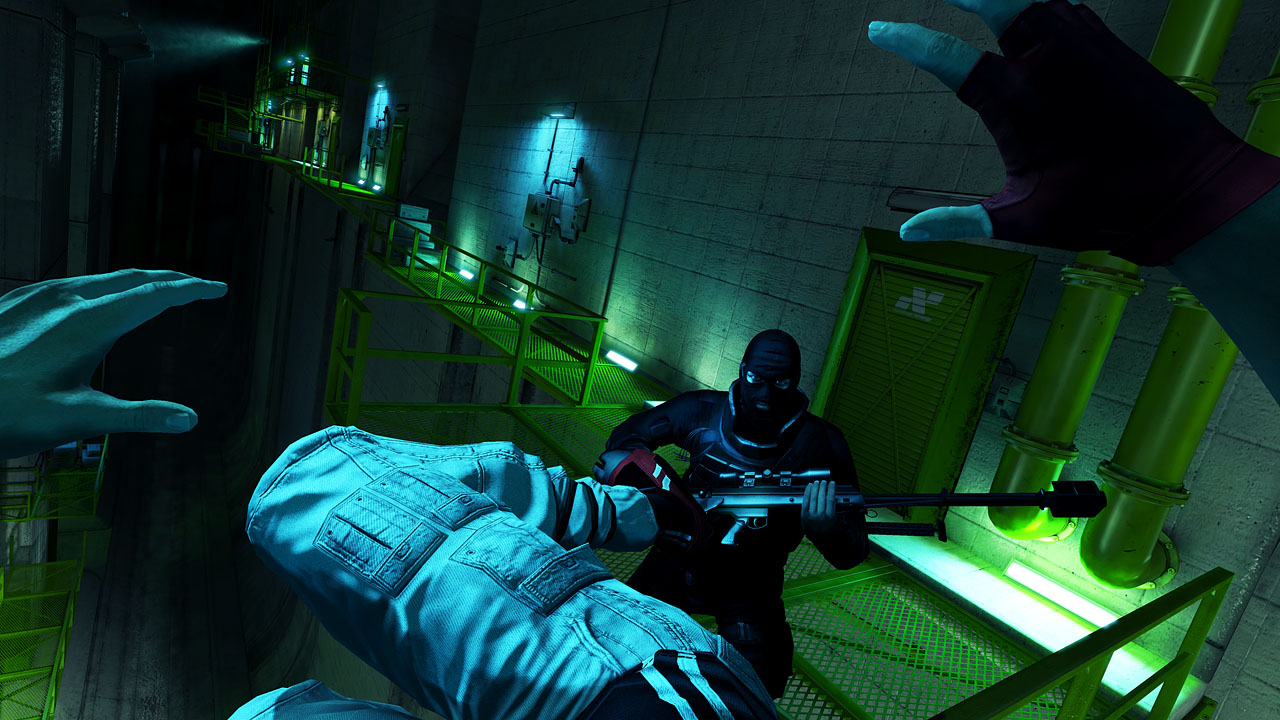 The city sparkles and shines in the sun as you run from rooftop to rooftop leaping, diving, and sliding. Mirror's Edge was one of the most anticipated games of the year. The idea of a parkour* style game where the main focus was not how many people you can shoot in the face, but how quickly you can get to the checkpoints is very appealing. Unfortunately while Mirror's Edge was ultimately kind of fun, the game doesn't really deliver on what the gameplay footage and announcement trailers seemed to promise (what’s new?). 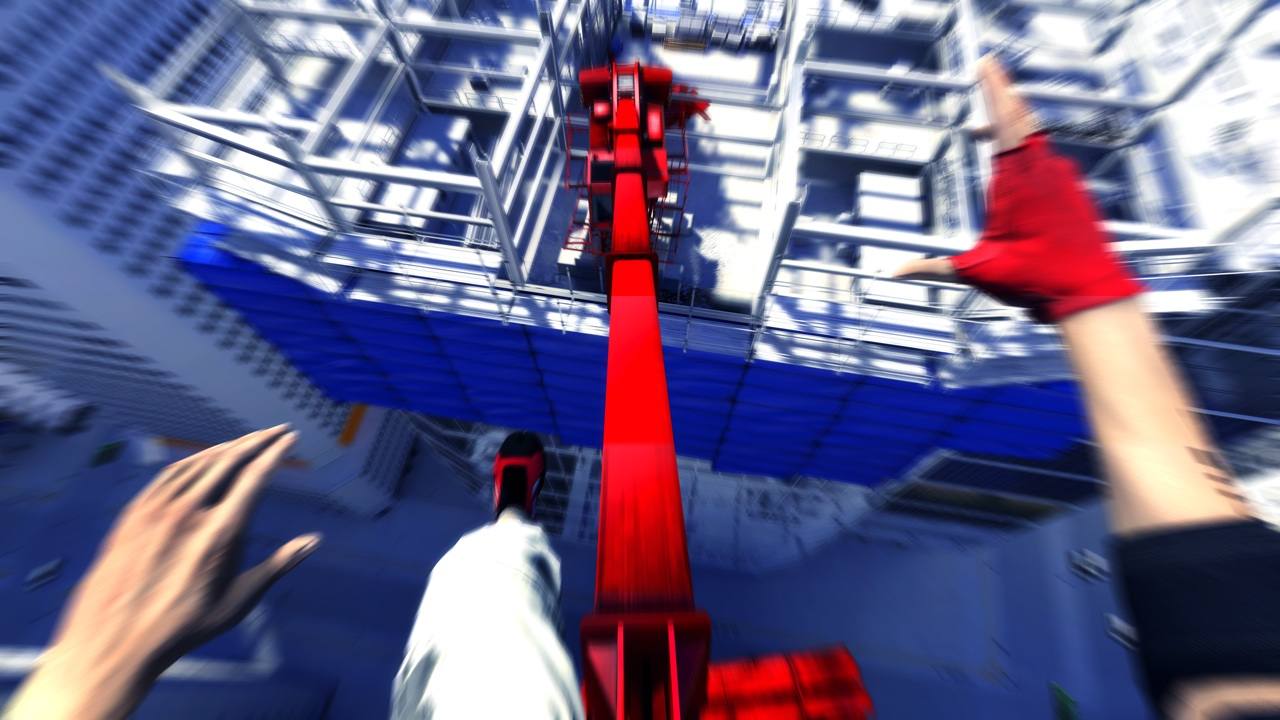 Matte red cranes - something you'd only find in Mirror's Edge.

Flow is what Mirror's Edge is all about, the entire game streams around it. This isn't explained at any point throughout the training mission, it's just kind of assumed that you can figure it out on your own. Some of you will, some of you will sit there, like me, and wonder where the hell you are supposed to go next. So what is 'Flow'? It's basically just momentum. If you run, you'll run faster and faster until you reach your peak speed, at which point you can jump across impossibly large gaps, sprint up walls, and vault over fences. That doesn't sound like a big deal, I didn't think so either, but it is. If you lose your flow (or momentum) by slowing down for any reason, the game suddenly slows down in the sense that you will be forced to take the slower, less interesting path because you can no longer leap across buildings and wall-run. At this point, without the flow, the game stops being fun, it just ends up being a game about climbing up stacked boxes, not scaling buildings parkour style. Think of crouch-jumping in an FPS to reach a glitch.  It takes practice to maintain momentum, and since Mirror’s Edge is all about free running, losing that momentum will ruin your gaming experience. 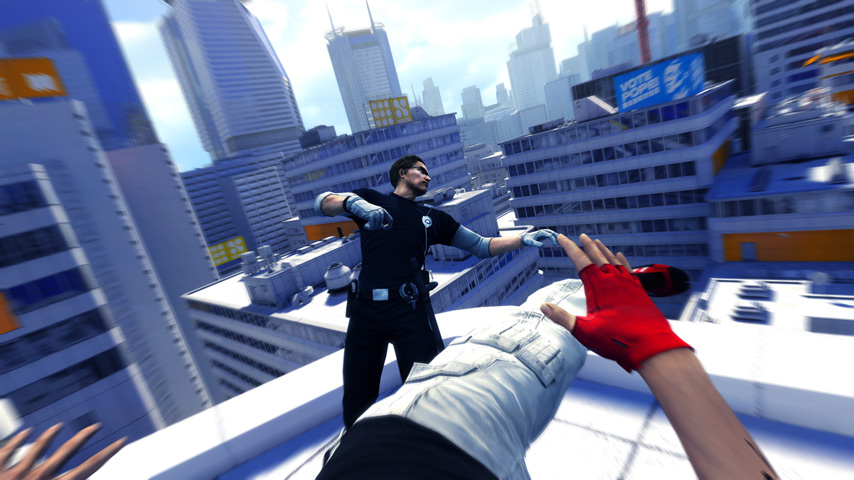 Normally GN would begin covering a game’s plot by the third paragraph, but in Mirror’s Edge there seriously isn’t much of one at all. The character you play, for some reason, has to run around the city trying to escape from the armed forces. At some point your sister gets embroiled in the plot, again without any reasoning, and that's about it. You're given a start point, an end point, and buildings to scale in between. Think of the setting as Orwell’s 1984, just without the, uhh, story.  To me, when all's said and done, Mirror's Edge feels more like a tech. demo than an actual game. More as if the developers were trying to say, “look, we made a first-person game that doesn't force you to shoot people,” and for that I applaud them. DICE made a relatively enjoyable first-person action technology demo that, if you want, you never have to use a gun in the entire game. In fact I would recommend that you don't, they're not very good. 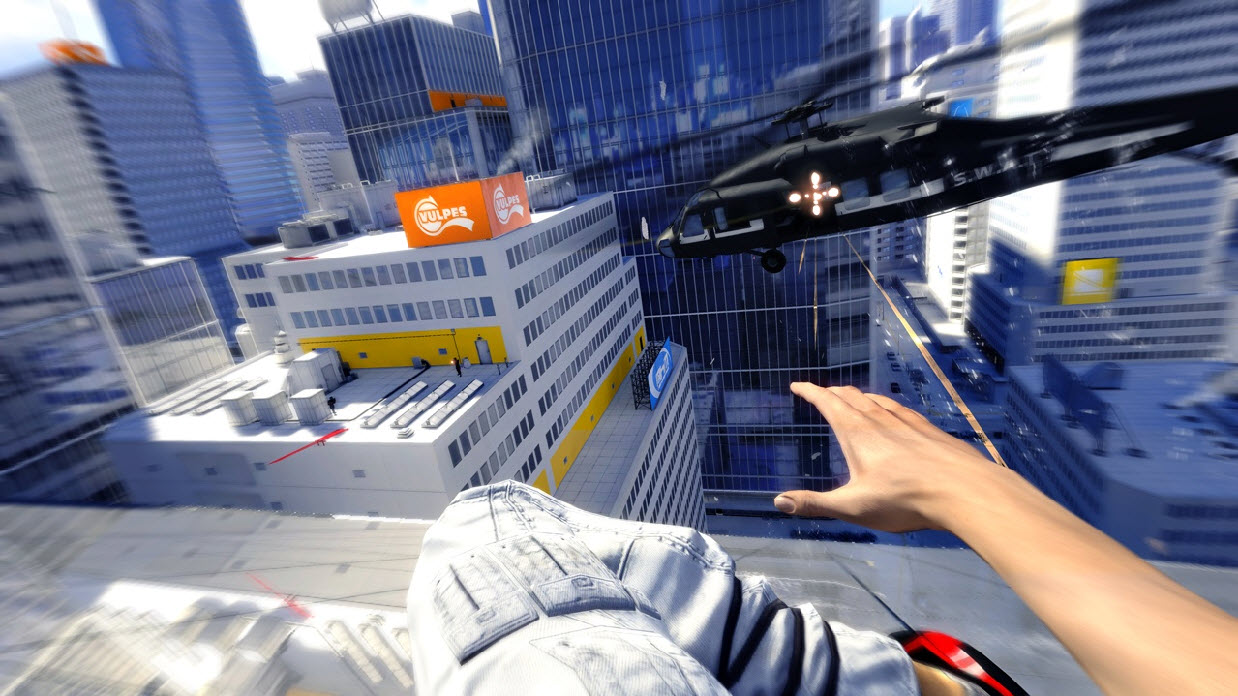 Get (away from) the Choppa!

Mirror’s Edge’s (wow, super possession) method of pathfinding is unique and interesting. As a gamer, I enjoy when a game integrates the methods of directing a player into the game environment itself. In Mirror's Edge instead of plastering giant, neon arrows around the screen, they just color the items that you should probably go towards in red whereas the rest of the screen is differing shades of white. This method of leading the player lets them know subtly where to go without taking them out of the experience entirely. This helps with the 'flow' that I mentioned earlier.

Mirror's Edge is a good demo of technology and design, but not a fantastic experience overall. A good way of saying “look what we can do different with a first person perspective.” In terms of the gameplay however, they could have taken a few tips from the architects and cleaners of the cityscape that you're dropped in. Use a little polish. 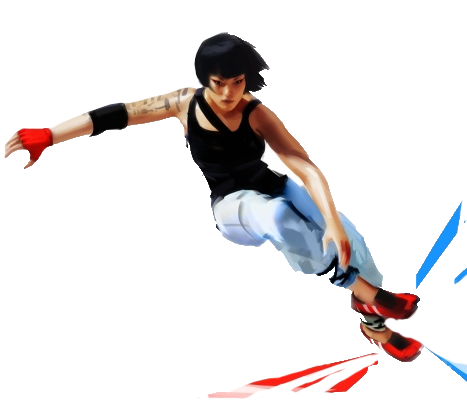 Short Term: If you can keep up your momentum and keep an eye out for the red landmarks, Mirror’s Edge can make for a lot of fun in the short term. If you are constantly losing flow you probably won't enjoy it half as much. - 71

Long Term: There's nothing to keep anyone interested in the game long term. The storyline is non existent and there's nothing in terms of downloadable content. Play through it once, maybe, if it can keep your interest, you probably won't be playing it again though. - 23


Overall: Mirror's Edge is a good concept; it could have worked out really well. Trouble is the game slows down TOO much when you lose momentum ending up in a much worse game of Ice Climbers, and that's just not fun. The absence of any reason to play through the game again makes it a rental and not a buy. If you didn't/don't play it, you really won't be missing anything. - 47

* = I know some of you might not know what parkour is, I certainly didn't, so check out http://en.wikipedia.org/wiki/Parkour or this video: http://www.youtube.com/watch?v=WEeqHj3Nj2c