The fact that the designers wanted to show us trees growing more than the actual gameplay doesn't bode well at all for Far Cry 2. 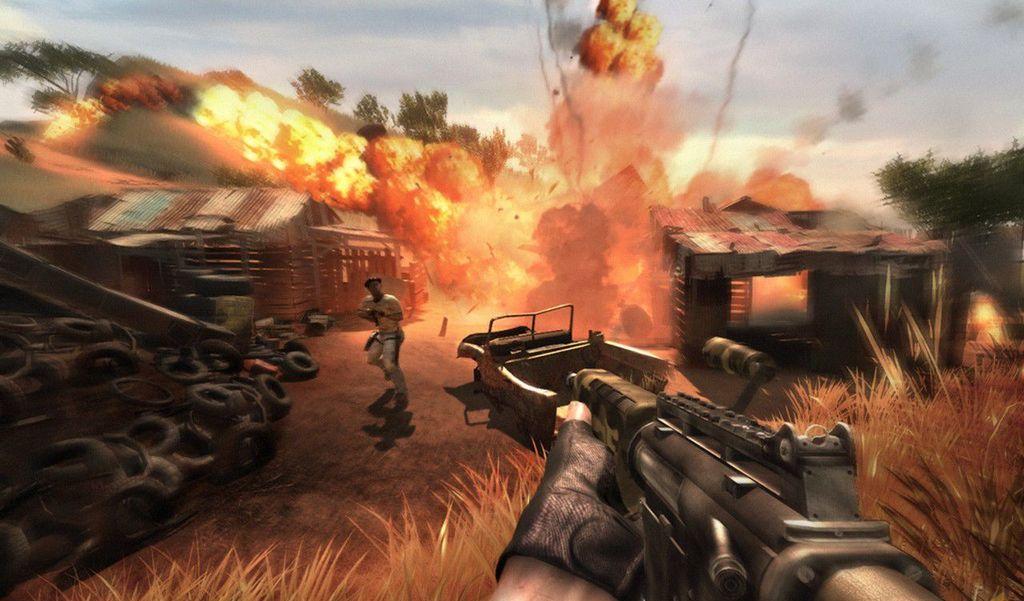 The original Far Cry game was a pinnacle of gaming in its time. It was the game that people stress tested their machines with; it had unprecedented amounts of foliage, lighting effects, and A.I. It really was THE game to own back in 2004. Far Cry 2 is more of THE game NOT to own. Yes it's repetitive, yes it's a simplistic shooter at heart, but there's something appealing about it. I had to dig a little but there's some glimmer of hope in this heart of darkness, but perhaps that's just one of the diamonds that the game seems to randomly scatter into awkward places for no reason whatsoever. 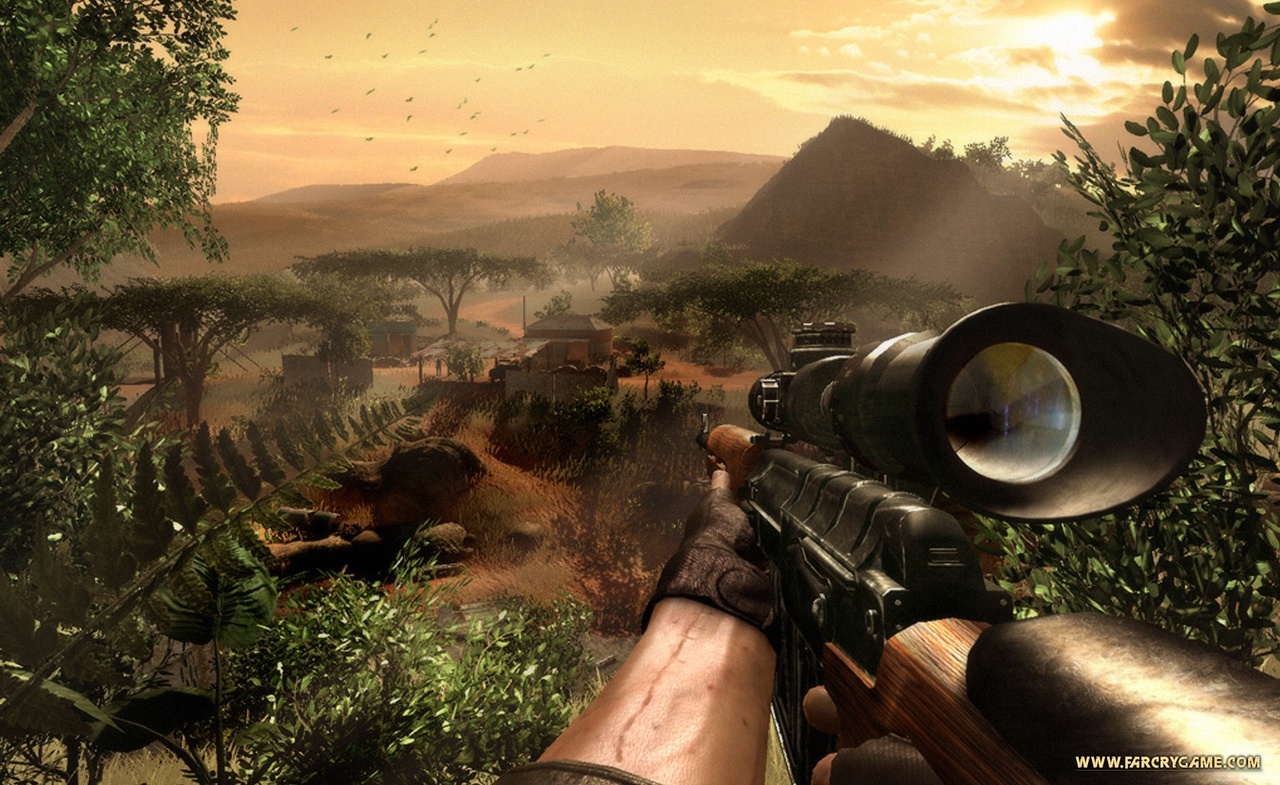 Let’s get the shortest part of this review over with: the good points. This way you can read the bad points with these in your head - instead of automatically forming an opinion based on all the bad points. Firstly, the game is huge and it's one of the only FPS games I can think of that is truly an open world. Yes, you have specific missions that kind of make it linear, but there's nothing stopping you from going to a known enemy hideout and cleaning house. Just for fun. There are no side missions really, only a few smaller missions, but there's enough to keep people entertained and to keep it feeling open, even though you're technically being creatively steered down a narrow, linear path. The game looks gorgeous too. The bloom effects alone look stunning, especially when the sun is setting in the desert and you're watching it dip behind the horizon... before taking out the high powered rifle and popping a few skulls. It's probably the best looking FPS that I’ve played, I'm sure Crysis looks better, but the fire in Far Cry 2 is truly phenomenal. The enemy Artificial Stupidity is also excellent again, just as it was in the original Far Cry. The A.I. has a lot of flukes that make it annoying, but as far as actually playing intelligently, Ubisoft has accomplished that.  There was one section of the game where I'd hidden in a small barn surrounded by dry grass, the enemy moved around to flank me, decided that I was too well entrenched to be coerced out, and instead just torched the dry grass and the barn with it. Leaving me no choice but to just make a run for the nearest rocky outcrop and hope not to be turned into a walking salad strainer. 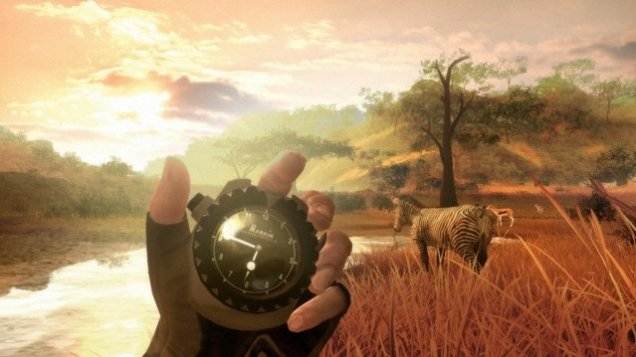 Hopefully after all that talk of the good things you want to play Far Cry 2, now to ruin that moment. If nothing else it's a good example of how a first person shooter should feel. Confined, alone, brutal and as if you're not going to get out of it alive. The game is truly open world, and while this is a good and interesting path for an FPS to take, it didn't really do the game any favors. The unnamed African country is too big, and most of it is filled with the same rocks, sand, and run-down abandoned shacks. There are bus services which take you to separate points in the map, but these make it seem like the developers thought, “yeah it's an open world, but we don't want you to actually see it. Here, use this bus,” all this just adds up to more of a redundant-world experience, regardless of how large it is. Also, while the A.I. is good in their tactical attributes, they really are just cold-blooded and it's hard to believe that people would actually act like the enemies do in Far Cry 2. For some reason I can walk straight into the main city of the game and not get looked at twice, but out in the actual world all I have to do is drive slowly past them and they start turning my body into ballistics gel. What the hell did I do to you?  Forum-member Pestifer said, “C’mon man!  Do you have to go out of your way to kill me?  Go rape somebody or something!” 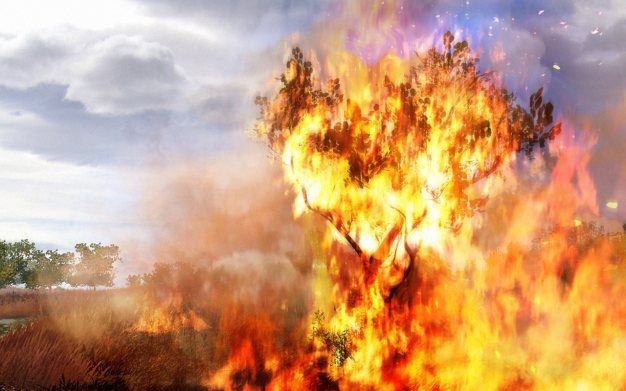 Far Cry 2 is merely OK. It’s nothing spectacular and definitely not the game that the original Far Cry was – separate from the names, the two games aren’t even related. It's just the result of a good idea that could have done with a little more creativity and a little less repetitive design choice. A bit of game polish wouldn’t have gone amiss either, I'm pretty sure you can buy it at all major retailers.

Short Term: Far Cry 2 feels and plays a lot better if it's played in short stints, anything longer than 2 hours and you'll really start to feel the drag. Go get a sniper rifle and pick people off if you feel in the mood (Jack Thompson would love that line). Other than that, just play through to the end without doing any exploring and you won't miss much. - 60

Long Term: In the long term there's really nothing here to hold anybody's attention. The multiplayer is OK but nothing special. There are plenty of other FPS games that do multiplayer better. The gameplay itself just gets too repetitive if it's played for longer than about 2 hours at a time. Go here, shoot person, come back. Use bus. - 40

Overall: Overall the game isn't too bad. It's not anything worthy of the history books, but it's worth a play. It's a little repetitive at times but at other times the sheer beauty of the game can make up for it. Nice try -