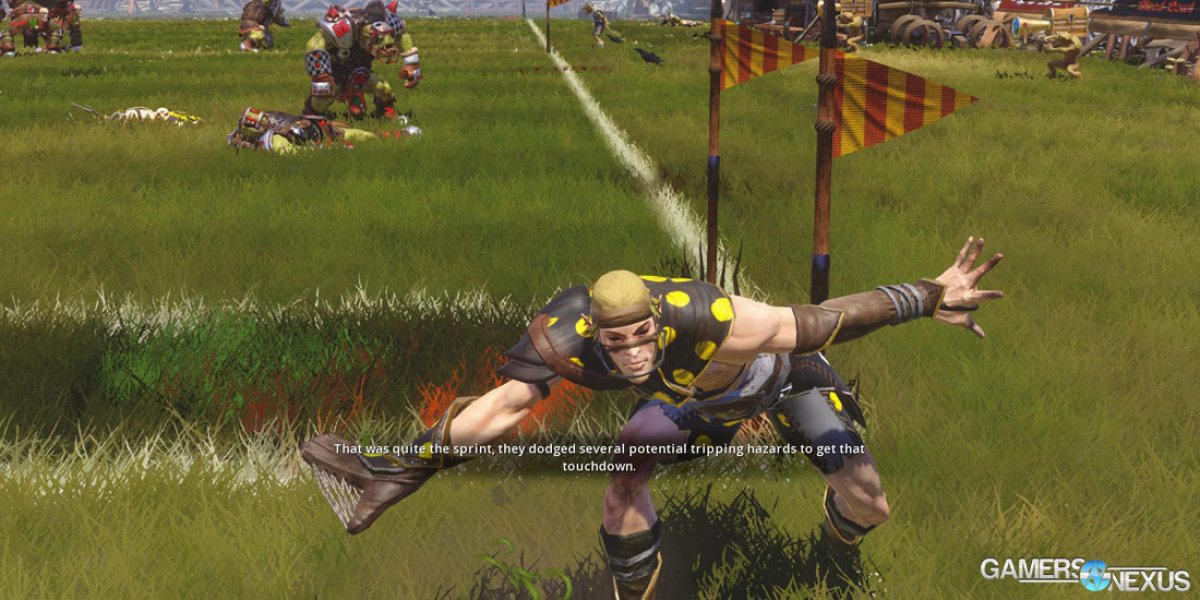 Blood Bowl 2 is made by Cyanide Studios and published by Focus Home Interactive, presently retailing for ~$45 online. The game is split between the turn-based and sports genres, offering a unique gaming experience and demanding minimal existing GamesWorkshop knowledge. 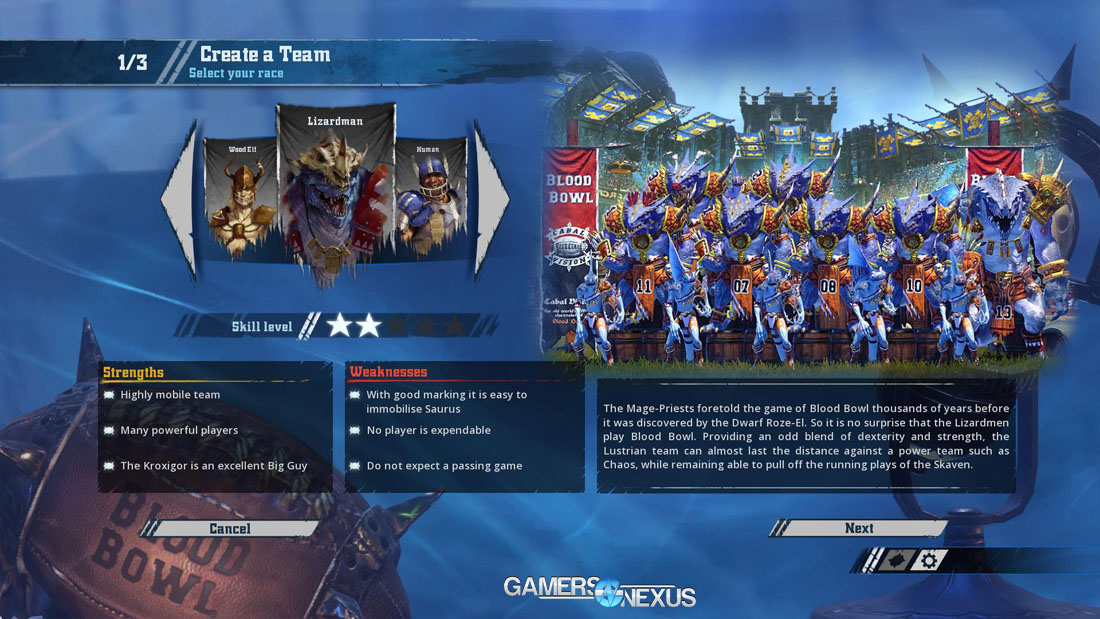 There's not much in the way of story for Blood Bowl – it's a game targeted at players who demand mechanical focus over anything else. Its timed, turn-based play sort of reminds me of chess: At the lower levels, it's a slow slugfest that allows strategic planning; at higher levels of play, the game accelerates and offers avenues of strategy before unseen.

At its heart, though, Blood Bowl 2 is a game of chance and risk management. D6-based die rolls rule the day, required at nearly every single action – including picking up the ball, which can be a bit infuriating at times. Play starts with positioning of defensive and offensive players, each of whom hold different roles – linebackers, throwers, catchers, runners – and stats appropriate to those roles. Stats consist of strength, agility, and move action (distance movable) ratings. Following player positioning, kickoff sends the ball to the offensive team and initiates the match.

Matches include a half-time (thankfully without a show, given recent Super Bowl half-times) and run pretty long at 16 turns. In my online multiplayer matches, where turns are limited to two minutes per player, games averaged a duration of approximately 30 minutes. Some matches exceeded this duration and felt agonizing in their back-and-forth. I often grew disinterested or bored as the match drew on, fatigued by the default two-minute turn duration. 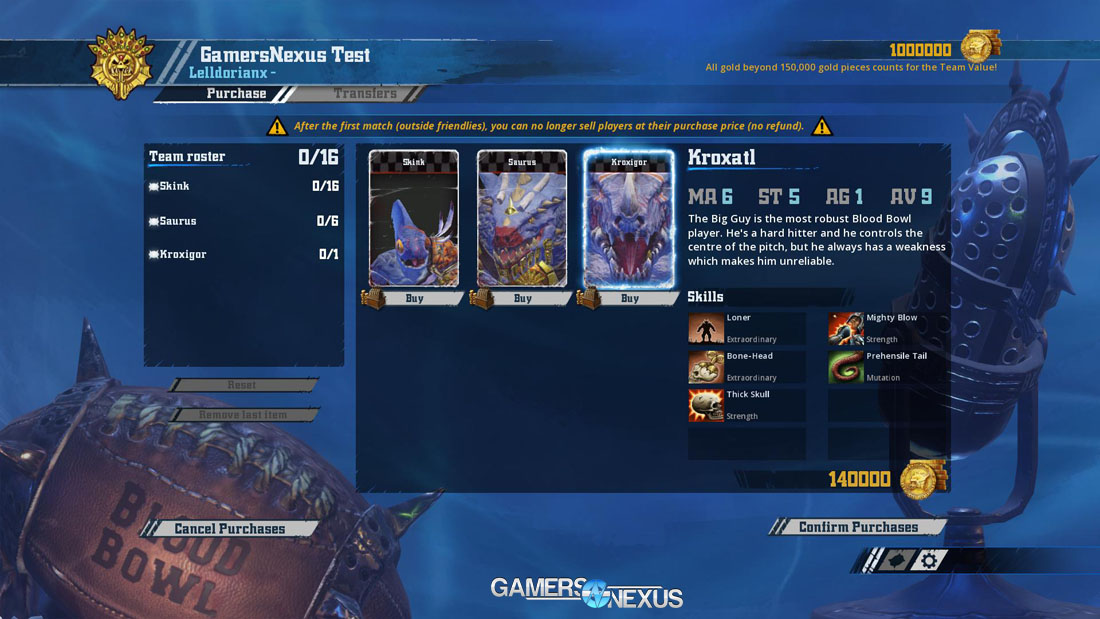 Although the game borrows from football, a lot of the rules are different. Scoring, for one, is a matter of single-digits (1-0 scores are common). It's rare to see a score higher than 2-1 in a match. Other than this, the major difference is the means through which players interact, more closely reflecting NFL Blitz than actual football rules. Players can attack any opposing player on-field, regardless of whether that player is a ball carrier. This allows for equal parts comedy and fury, but becomes more familiar and acceptable as coaches (that's you) gain experience.

It should be expected that several members of each team will be down every turn, as players trade blows on the pitch. The worst case scenario – and one with which I take issue – is the death of a player. Death is by chance, as with everything else in Blood Bowl, and permanently removes that player from the team. Unfortunately, this kills startup potential in online leagues and guarantees deletion of teams which lose players early in their careers. Funding is limited and it becomes more viable to just make a new team when losing a player in the first game.

Other gameplay elements include purchase of cheerleaders, assistant coaches, die rerolls, and fan favor. Random events occur throughout the game, but the main ones are at kickoff – a coach might be allowed to reposition the ball or players, for instance, or half of the team might be knocked-out by the crowd's pitch invasion.

All this known, it makes sense that gamers will often feel like they're playing against dice more than skill. An 83% chance of success to pick up a ball doesn't mean it'll happen and, if your trained ball carrier does manage to fumble when under no pressure whatsoever, play will turn-over to the opposing team. That's not to say the game's unfair – the other coach will also be battling the dice – but it does mean the game can feel as if it's got too much variance, which is what induces player rage. 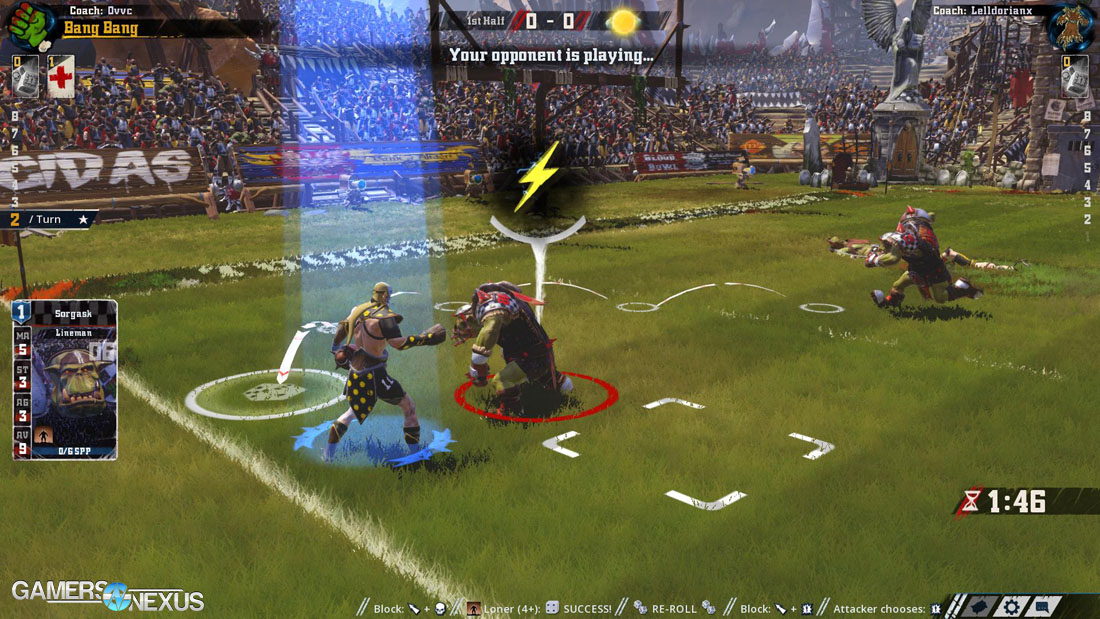 Teams aren't balanced, either. I complained about this when writing about Blood Bowl 1 some years ago and have done so throughout the test process of BB2, but have been met with the same response by fans each time: It's supposed to be that way. The imbalance of teams, I've been told, is meant to reflect the humorous potential of the game while simultaneously allowing for competition.

I've only ever played the digital version of Blood Bowl, so my demands are different than those of a Blood Bowl board game veteran. Providing perspective, I've been a long-time turn-based and real-time strategy player, and consider the strategy genre to be “home base.”

I disagree that imbalance is a fun mechanic. That doesn't mean the game is bad – it just means we disagree on some core design elements. To me, coupling imbalance with the heavy focus on variance and chance means more plays that just don't reward the player for skill; they feel dichotomous in their objectives. Off-balancing teams to try and require crazy strategies for success sounds fun, interesting – but throwing in die rolls with that just becomes a little bit too much. For me, personally, it's got to be one or the other. 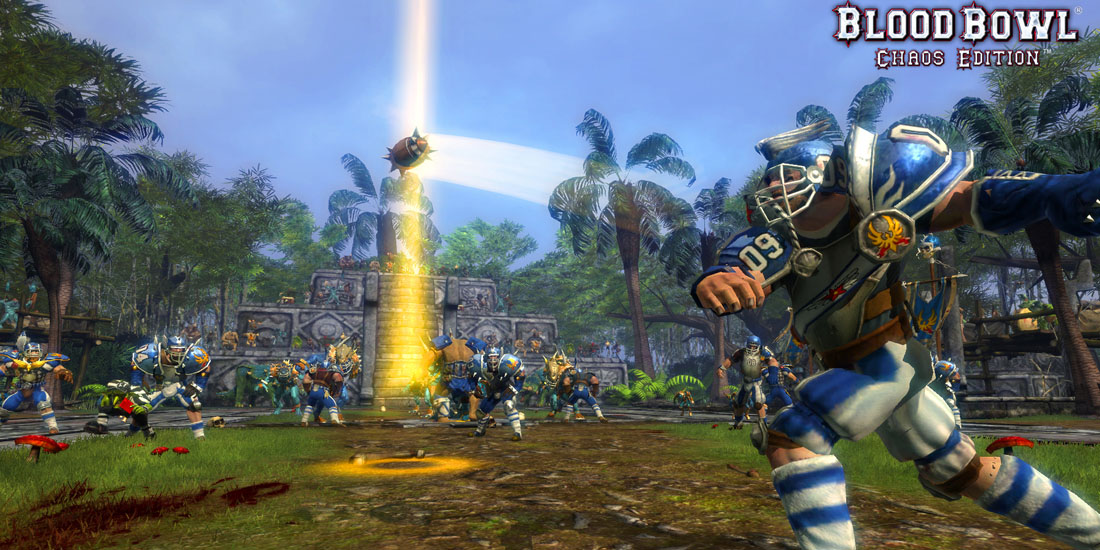 (Above: Blood Bowl 2 has come a long way from Chaos Edition, graphically).

A lot has changed from the first Blood Bowl. As with most sequels, the graphics and underlying engine have seen major updates and an overhaul, the UI has been refreshed, and the multiplayer support has grown. A deeper online league system now offers official and player-made leagues, allowing for fantasy league-style laddering.

Blood Bowl is part of a new era of games that has potential for growth as it ages, though it remains to be seen how much that growth will cost the buyers. There are numerous pathways for tournaments and multiplayer support, and even more pathways for future DLC add-ons. The game has a strong framework based on – but not entirely faithful to – the rules of a proven tabletop board game. Expansion is made easier with such a foundation.

The strong foundation does feel a bit barren of features right now. The game is meant to grow with the playerbase – a risky approach given the $45 price-tag – and add teams, leagues, and other features with patches. Owners of the Chaos Edition of Blood Bowl 1 may feel restricted in the early days of Blood Bowl 2. The new game ships with far fewer team races – just 10 at present – but does so on the promise of at-launch balance and stability. It's fair to note that Blood Bowl 1 initially shipped with 8 races, though that's not what people are migrating from – they're going from Chaos Edition, which has 23 races.

Blood Bowl 2 launched with Humans, Orcs, Dwarves, Skaven, Dark Elves, Chaos, High Elves, and the newcomers, Bretonnians. Wood Elves and Lizardmen were provided as free DLC immediately following launch, awarded only to pre-order purchasers; Lizardmen (no Wood Elves) were provided to day-one purchasers and others redeeming codes through this weekend. Cyanide made it a point to indicate the good will of this provision, noting that the Wood Elves and Lizardmen weren't initially targeted for free distribution so early in the cycle. It is known that additional races will be added as the game matures. Each of the races has a unique playstyle that shines (or not) in multiplayer.

The race abilities gap doesn't come through with the AI, which somewhat predictably and stupidly manages its player attack/defense avenues. As players grow more familiar with singleplayer AI, it becomes more predictable and easily defeated, with no real option for increased difficulty. Unfortunately, the lengthy tutorial-campaign hybrid means no proper campaign. We play as the stereotypical once-great humans and learn how to play the game throughout the campaign, little story or unique strategic opportunities thrown in. Single-player leagues are possible, but grow boring given the predictability of AI.

The UI has improved drastically over BB1. The game now presents percentages for dodging, passing, and catching success, all of which help accelerate play and make decisions. We can more accurately preview player movements on the pitch prior to move execution. League creation and participation is easy with BB2, and the option to trade players amongst online coaches is pretty cool. Still, though, the UI needs to grow. There's no in-game grid at present and no tagging of players, which means you've got to hover over each player to see what its strongpoints are (until you memorize all of the models, that is, which is easily done since there's only one per position).

As a hardware outlet that focuses on benchmarking, we also found the game's graphics options disappointing – because there are none. You get what you're given, and there's no room provided to reduce LOD or change settings to better match video card capabilities.

Blood Bowl 2 is for Certain Types of Players 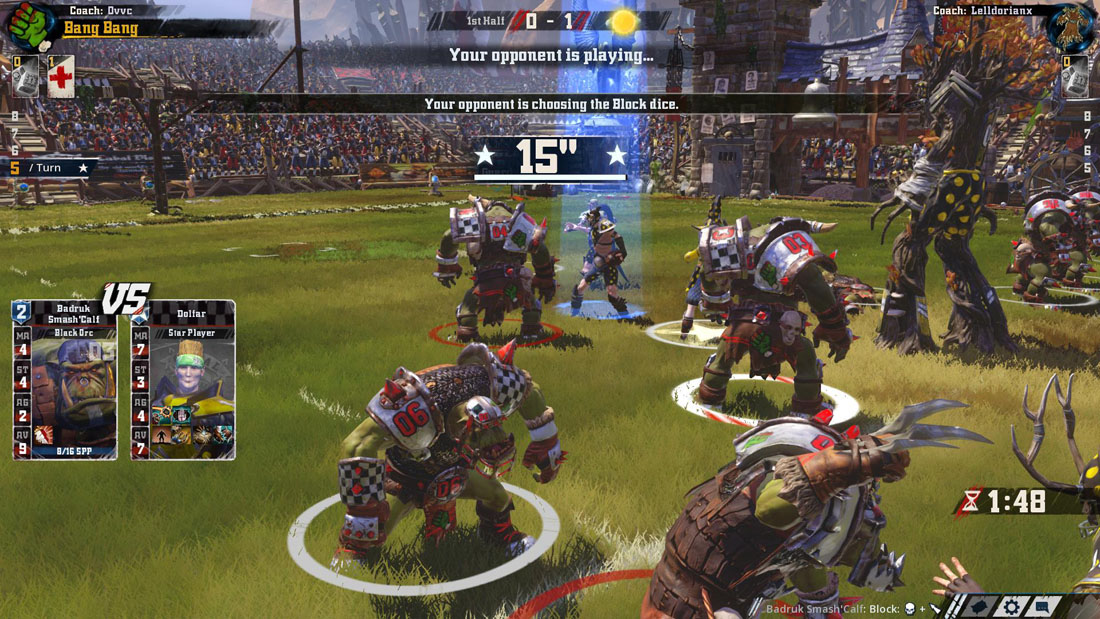 There's no two ways about it – Blood Bowl is meant to be equal parts frustrating and exciting. That's the gamble. Through this execution, it takes a certain type of player to truly enjoy Blood Bowl 2. The game is fraught with well-timed comedy from the announcers (who are voiced superbly), silly events, and imbalanced teams that make it interesting. These things can also be annoying, and we'll leave that up to you to decide whether that's true in your case.

The game is fun, but it feels like it's lacking in the areas that I'd enjoy most: I'd like better and more in-depth team management, player customization, and league options. The lack of these features means that I experience a burn-out and reduction in interest as matches and hours drone on. For those who are happy taking two fairly vanilla teams and smashing them against one another, Blood Bowl's already got that.

That stated, I did get some enjoyment from a few breakaway moments with runners. I found my playstyle best suited to throwing/running, but races exist for those who favor more bash-y play, too. Even when the fun moments came out, it felt like a lot of work to get to them – the matches kind of drag on, and the nature of play means you're not actively engaged the entire time.

Most of the problems are either simple fixes – like adding a grid – or planned DLC add-ons, like more races. The other issues, the deeper ones, won't be “fixed” because they're more seen as features to core gameplay. That'd be die rolling, intentional team balance, and the like.

Blood Bowl 2 is a worthy title for those with a penchant for gambling and the patience (read: control) for things to go poorly when everything else indicates a good plan.

I do sincerely hope that its developers learn when and how to use “die” versus “dice,” though. That drove me crazy. “Roll a dice.” Cringe. But this certainly didn't impact overall disposition toward the game.