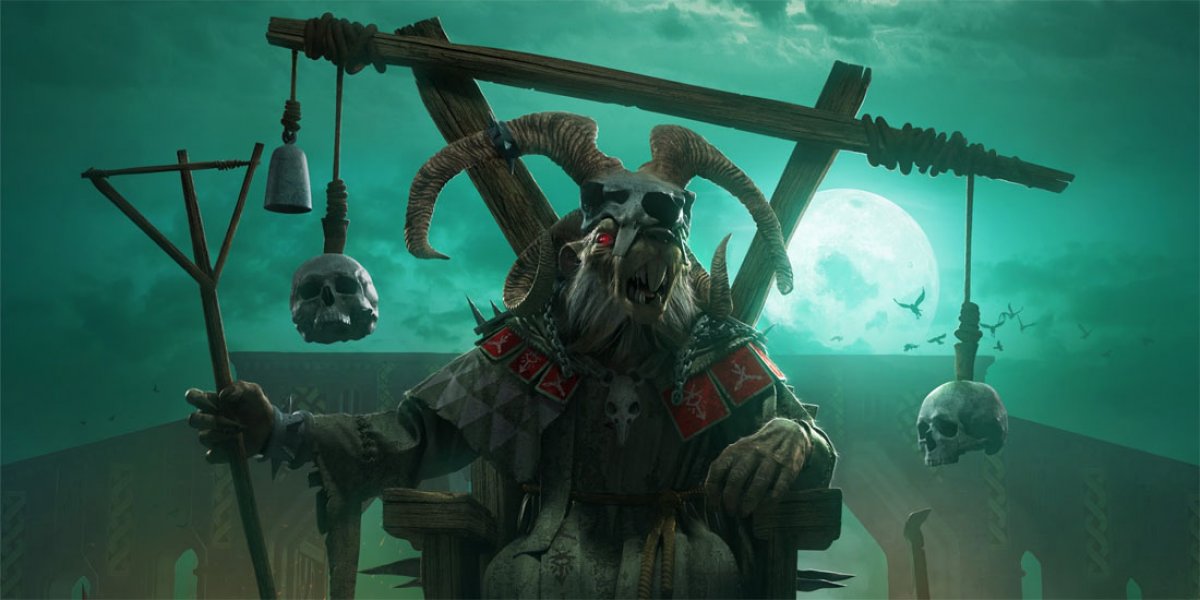 Looks like Peter Piper decided to take a few days off, and all hell broke loose. Good job, Peter. Now five unfortunate souls have been thrust into the midst of one of the most brutal vermin infestations in Warhammer history!

That’s the premise of Vermintide: The End Times, developed by Fat Shark Games, and I couldn’t be happier.

It’s important to note that I am a little biased (a necessity of good game reviews), as I am a huge Warhammer and Warhammer 40k fan, but Vermintide is everything I could have asked for in a co-op survival thriller. From the very instant the game is loaded, I was filled with a sense of dread – every piece fits together to give the player a desperate, horror-filled experience without relying on cliché jump scares or a false sense of foreboding.

We're given the choice of 5 playable characters as we work through missions overrun with Skaven – a species of rodent-humanoids – and each character manages to maintain a unique feel, uncommon in games of the team survival genre (Left for Dead). There's the Witch Hunter, Victor Saltzpyre; the Elven Waywatcher, Kerillian; the Dwarf Ranger, Bardin Goreksson; the Bright Wizard, Sienna Fuegonasus; and the Empire Soldier, Markus Kruber. Depending on play style, finding a character befitting of player needs is quickly done. Do you prefer relying on slower weapons that cleave through multiple enemies? Kruber may be the solid pick. If you’re looking for in-your-face explosions, check out Sienna and her pyromancy.

Each character comes with their own animations, voiceovers, and arsenal designed to fill a gap in your team of up to four players. Jump into a mission and you’ll find various obstacles to overcome – subterfuge, intense engagements, and story progression included. 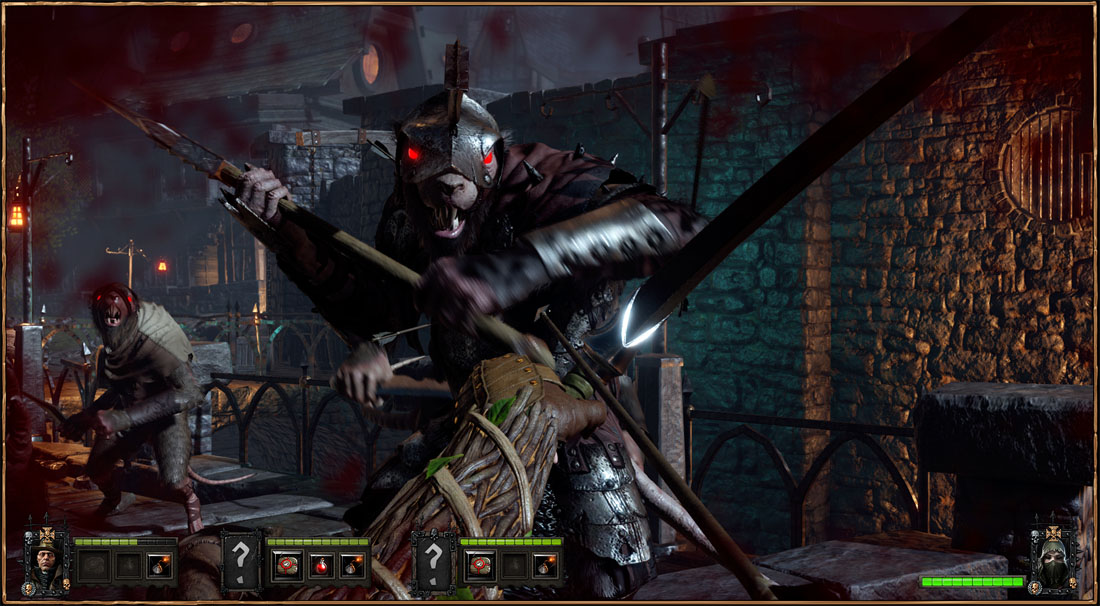 In one such mission, I was tasked with maneuvering through a bell tower, where I fought my way to the top to destroy a bell the Skaven used to wreak havoc upon their enemies. Gameplay feels smooth and intuitive, and combat, even though each character has only a few animations, flows in a fashion where every move counts. Slamming a shield into your enemies sends them sprawling across the ground, and cleaving through hordes of rats – watching their limbs fly apart, dismembered, as you hack-and-slash your way to victory – couldn’t look any cleaner. Well, depending on your definition of “clean” – if “blood and guts and limbs” isn't a part of that, then I suppose it could look cleaner.

Vermintide took notes from the Left for Dead franchise and improved upon the formula, netting a significantly more enjoyable experience. Items are scattered through each mission to help along the way: Health potions, bandages, bombs, and more health potions. Particularly important items to grab are the tomes. These tomes are scattered throughout the levels and increase potential rewards at the end of a mission.

Most of the Skaven are smaller, weaker critters that can be slain in a single blow. However, once you push inward, you’ll start to meet more vicious varieties. The Globadiers are especially painful, as they’ll throw grenades of poison gas that can quickly occlude your team in choking poison. Gutter runners will work to jump on unsuspecting teammates that are away from the group, and Mancatchers use long hooks to choke the life from those who turn the wrong corner. Armored Stormvermin hit hard and take a lot to kill, but nothing is quite as terrifying as the Rat Ogre. These brutes can be heard from quite a distance as they charge in, demolishing anyone and anything that stands in the way. There weren’t too many enemy types to fight through yet, but there has been some word that the team may be adding in other creatures or species to fight. I’d hate to get in the crossfire between some Skaven and Chaos cultists! 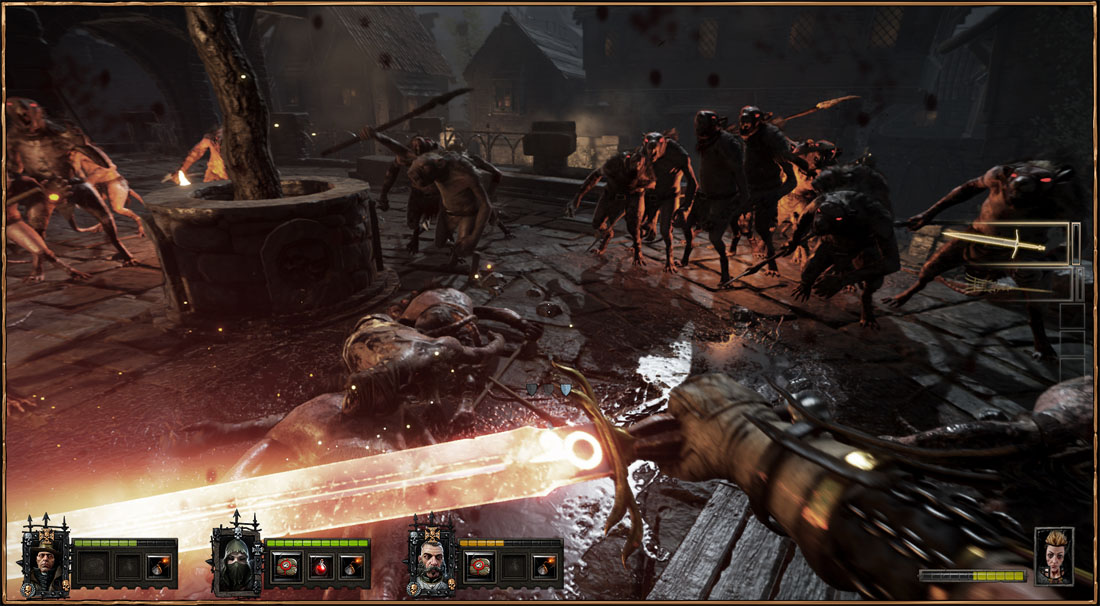 At the end of each mission you are given a number of dice to roll. These dice add up and, depending on the roll, award an item listed within a tiered list of potential weapons, armor, and trinkets. These can all be equipped by your various characters, improving your stats and changing the way each character plays. One of the big changes from other survival games is that these stats actually seem to have a dramatic in-game effect. A sword that hits harder but swings slower will be a noticeable exchange of stats. You may cleave through multiple enemies, but will be more vulnerable to attacks if not careful. Even more interesting is the forge, which allows combination of items for better rewards.

There are a few technical errors, of which we suspect the developers are likely aware. Some of the AI pathing is chaotic and enemies can get stuck within or behind objects. In one map, a Rat Ogre went to charge my team and got stuck on a staircase. Kind of kills the suspense. We casually walked around behind it and killed it without ever getting attacked. In another instance, a gutter runner got stuck behind a wall, helpless we blasted it from afar. Some of the facial animations on the bartender were off as well, if we're nitpicking. These are extremely minor concerns given their low frequency of occurrence.

Vermintide's release date is set for October 23, and I highly recommend this to anyone who loves Warhammer, survival games, or team-based objective games. The price-point is well below most AAA titles, but Vermintide can easily give many larger studios a run for top game. Grab your friends, pick your character, don your armor, and get ready for a brutal shock as the Skaven horde overruns everything you hold dear. We liked this one.