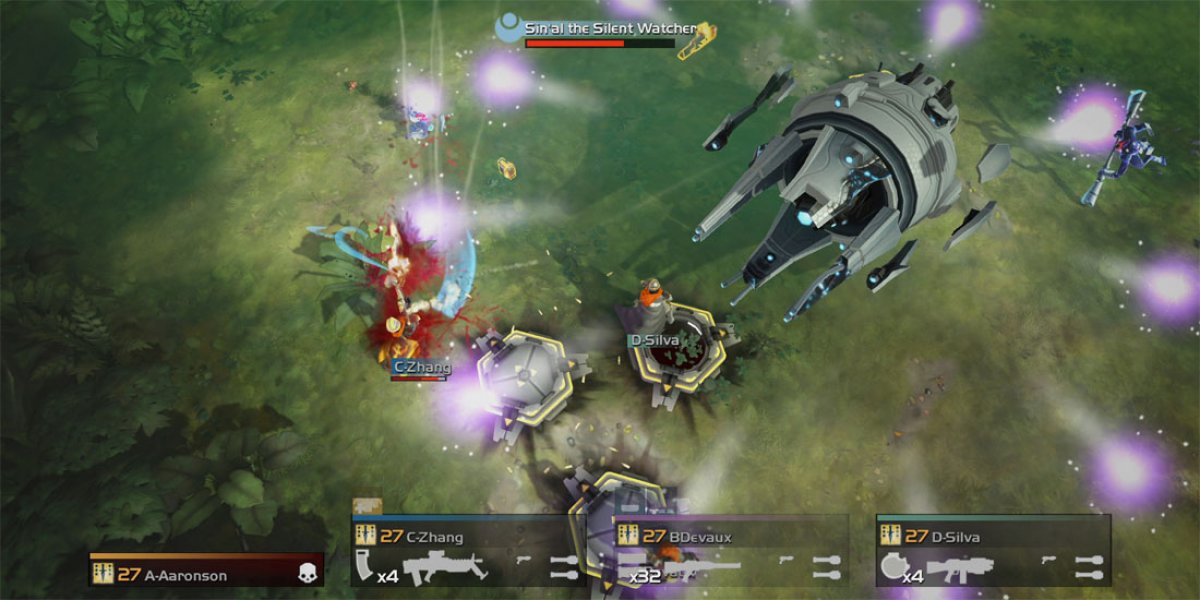 This is a game that is best played with others. Accordingly, the game features a useful voice chat, though the quality doesn’t rate with Ventrilo or the like. Finding an online game thus far has been easy enough. The multiplayer map always has ample games to join, and if for some reason there isn't one, simply start a mission and call in an S.O.S. beacon. Fellow helldivers will drop-in to the game in no time. Keep an eye out for those drops.

Those drops. Oh, the drops. In Helldivers, drops are called “Strategems,” and they're the pivotal point of play. Drops fly down to planet-side from command ships orbiting above, effortlessly squishing anything in the landing zone. Strategems take Helldivers from a fun, arcade-like co-op to a full-on cluster*#^@ – mostly because of friendly fire, which is always on; those drops traveling at supersonic speeds from your command ship above will squish anything they land on like a bug. And, while you’re blasting away and trying to deke oncoming fire, you will get squashed – a lot. That mayhem is what makes Helldivers fun and charming. There will be death, most of the time as a result of fellow squad mates’ negligence. But, when it comes together the team makes it out alive, there is a clear sense of accomplishment. That's rewarding in and of itself on the harder missions. 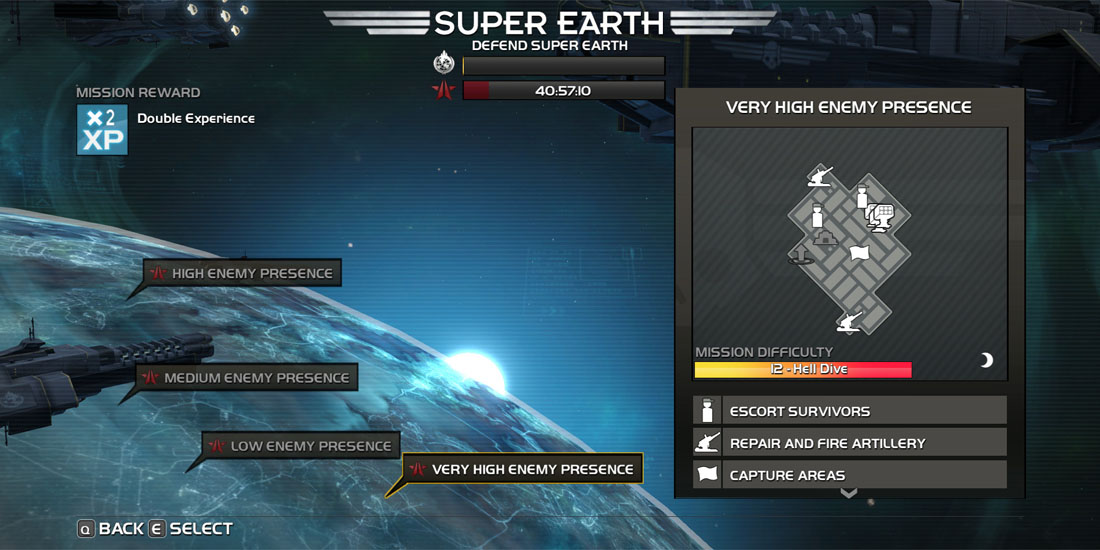 Completing those harder missions will grant XP, and completing all the missions on a planet will unlock a particular planetary reward. Rewards can include new weapons, strategems, and perks. These are used in character loadouts, selected before each mission. A loadout consists of four stratagems, one perk, and a primary weapon. Primary weapons run the gamut of assault rifles, sub-machine guns, shotguns, and laser weapons, providing a few different playstyles. Perks include things like “Strategem Priority” and “Heavy Armor.” The former reduces cooldowns on drops by 40% and the latter equips helldivers with heavy armor – obviously – that tanks more small arms fire before being downed. Strategems include mech suits, ammo drops, and defensive turrets, among other items. 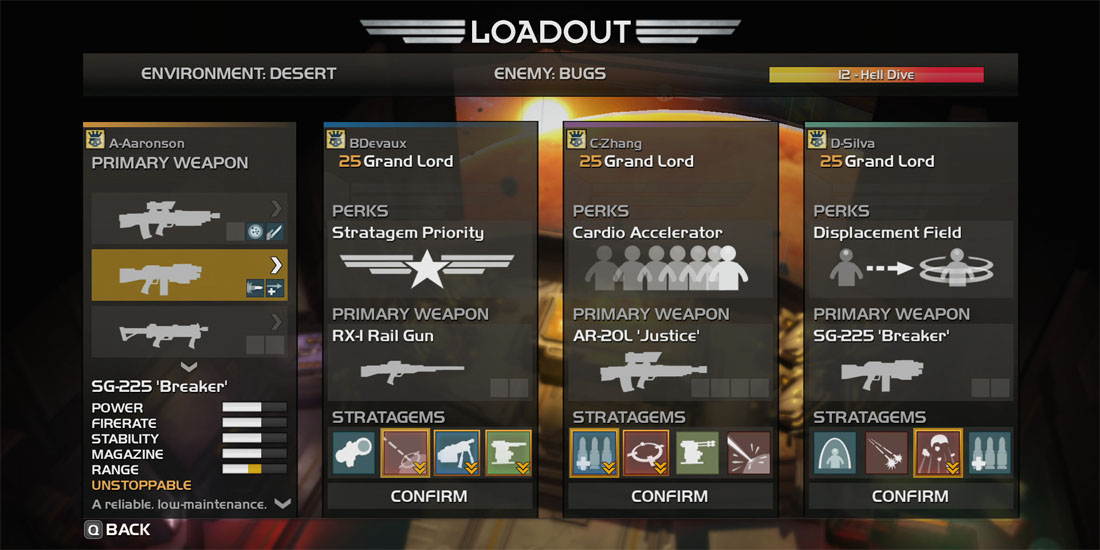 In addition to gaining XP on missions, the maps have “samples” that can be found and stockpiled. Every set of ten samples provides one research point that can be used to upgrade weapons, perks, and strategems. The loadout chosen will vary by the style of play employed. Personally, I’ve been deploying in a support role, using Strategem Priority so that my resurrection drop is almost always off cooldown so I can res deceased squad mates quickly and frequently (an ability which is used incessantly). I also use the cardio enhancer perk in combination with a sub-machine gun, both granting me increased movement speed to get out of combat quickly in order to radio in those res drops. (Using the radio to call in those and other drops requires the player to enter a pattern via WASD or the D-pad – which makes for some tense situations). That sub-machine gun is also upgraded with armor-piercing stun bullets that temporarily stun enemies, making them easier targets for my more heavily-armed squad members to finish off.

I did read some complaints about the DLC on launch and this game being a pay-to-win situation. I don’t quite understand those gripes. The DLC, as far as I can tell, isn’t necessary and I’m not sure how you can pay to win in a game that has no PVP. If anything, your squad mates may have paid to allow you to ride along in their tank. 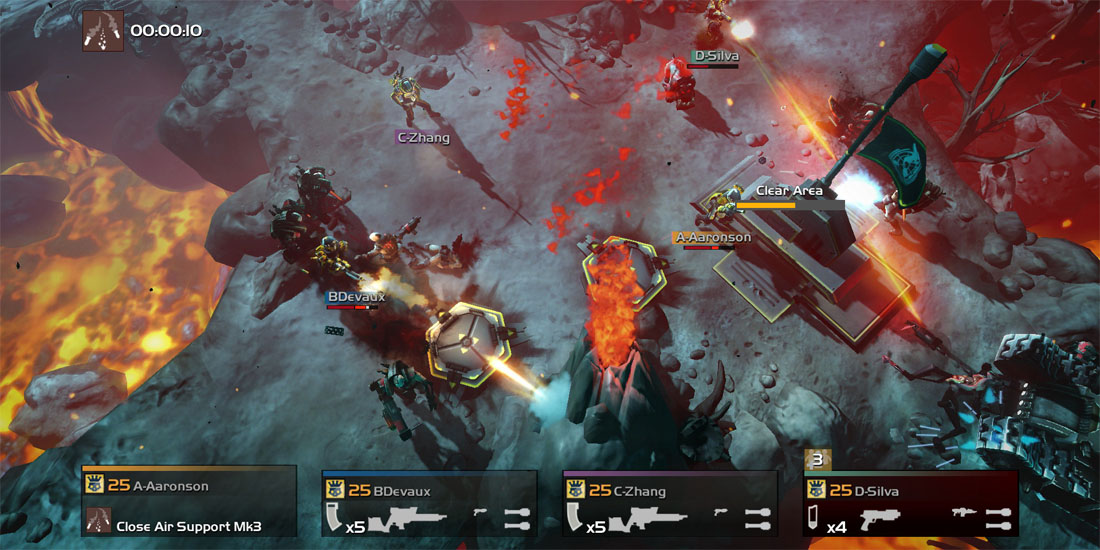 At any rate, the only real downside to Helldivers is its lack of a real endgame. Once you hit the level cap and have all the unlocks, there’s nothing other than wanting to drop-in with some buddies to massacre aliens to keep you coming back. The missions aren’t that varied, there are only three races of enemies, and once democracy has been brought to the entire galaxy, the war simply resets.

All things considered, at 20.00USD, Helldivers has been and will remain a great purchase for me. In my spare time, I work as an attorney with a heavy workload, so I want to be able to jump into a game, find a match, and have a good time -- even if I only have 30 minutes to play. This game is for people who: (1) don’t take themselves seriously; (2) are looking for an old-style co-op arcade game; (3) want to get in a game quick; (4) want to kill hundreds of aliens with their buddies; and (5) don’t want to worry about crafting grand strategies in order to prevail.