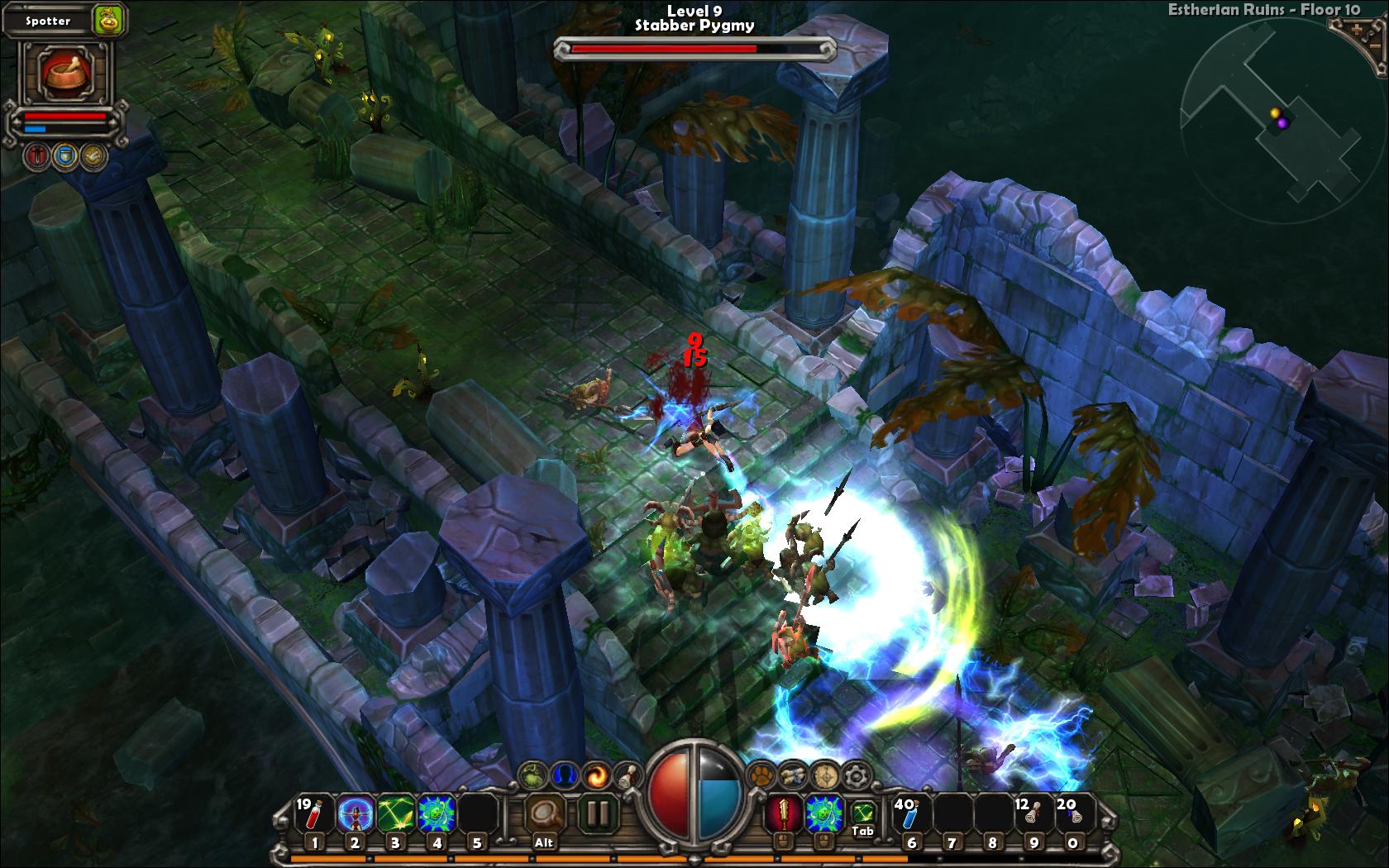 The isometric masterpiece that was Diablo is reincarnated in Torchlight, bearing striking resemblance to the original series. Remember the Ranger, Fighter, and Mage from the first Diablo? If so, you’ll feel at home with the three core classes of Torchlight: the Vanquisher (ranger/rogue), Destroyer (fighter), and Alchemist (mage) represent the main heroic spectrums. The classes each have their own separate skill trees, similar to Diablo, but simplified and depressingly shallow in comparison to the role Torchlight tries to fill as Diablo 2.5. Torchlight introduces a few fun-yet-potent player pets. More than just a gimmick, your cat or dog will defend you from attacks, pick up loot for you, even house its own inventory, which the pet can carry to town in a mere minute, only to be back having sold any loot it has picked up. Pets have their own respective skill scrolls, meaning extra customization and a strong companion. 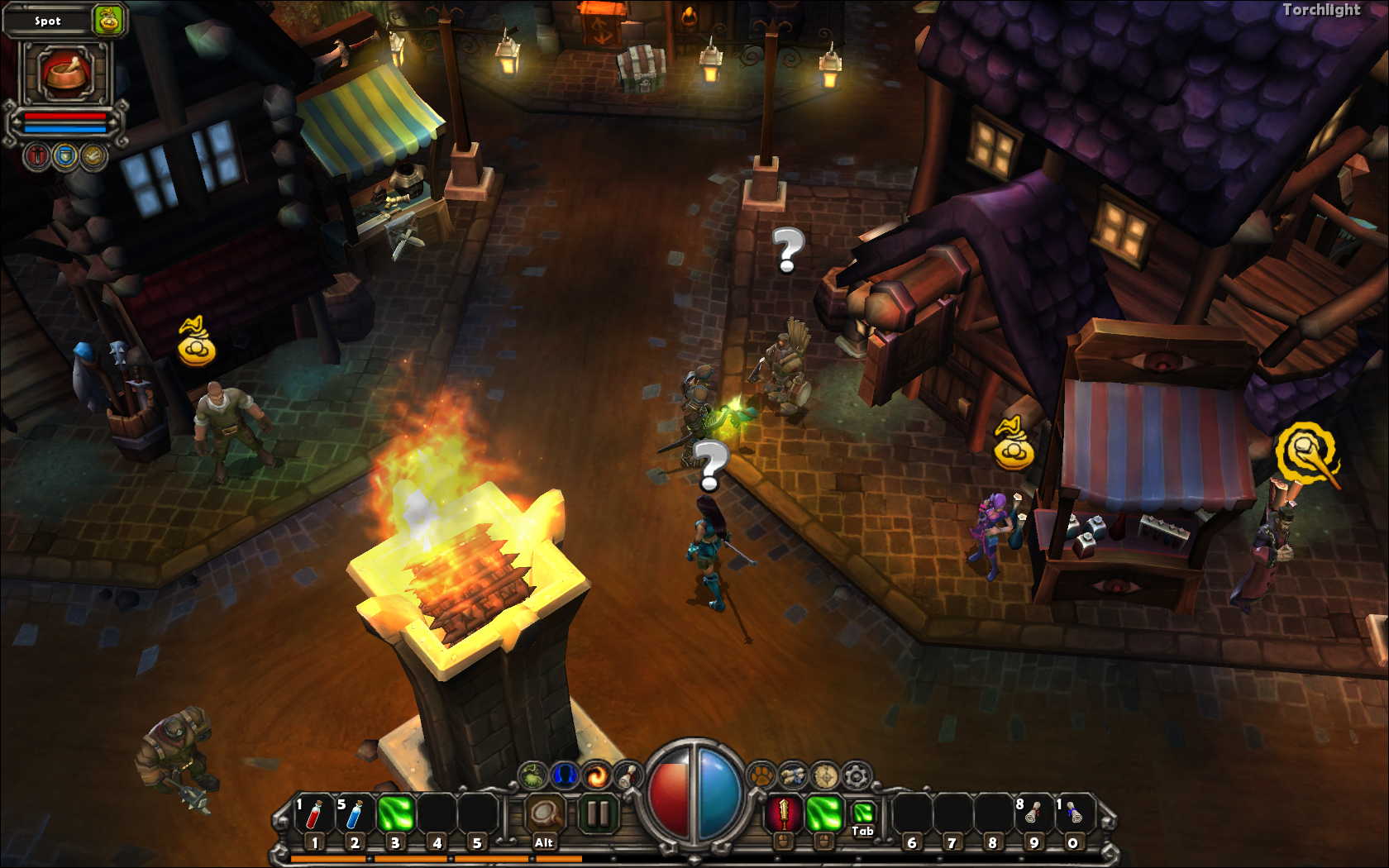 You are dropped into a ramshackle mining town (named Torchlight), famous for their rich Ember minerals, but things seem to have taken a turn for the worse. Without spoiling much, the miners can no longer mine like they used to, and you've arrived at town to investigate. The town is filled with NPCs with whom you can converse, expanding the story for those who care, or buying and selling goods for those who don’t. Just like in related hack-n-slashing dungeon crawlers, Torchlight focuses on intense and addictive combat, with story as a nice bonus. 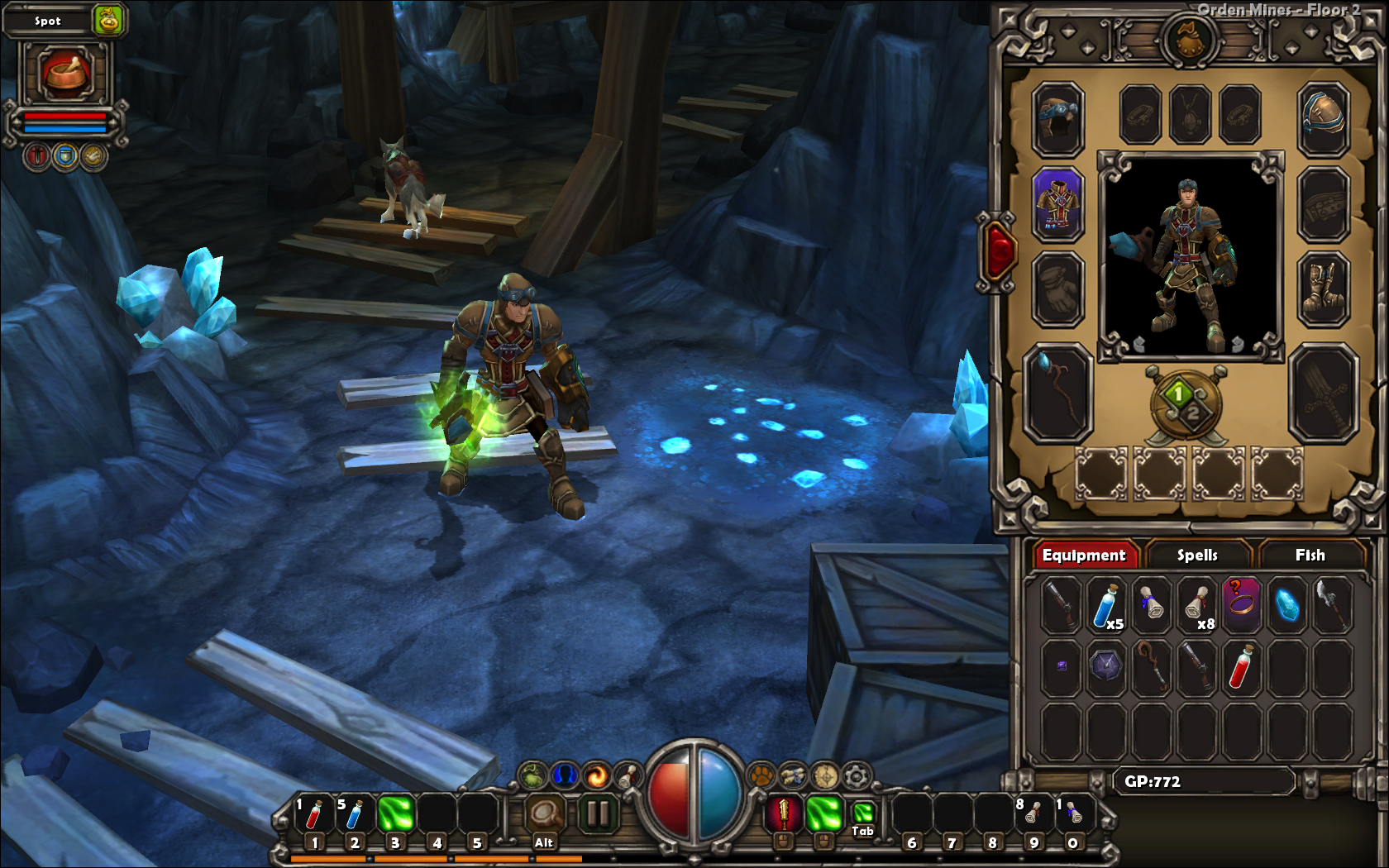 On first delve into the mines, I was pleasantly surprised to see that I wouldn't have to stare at the same environment throughout the entire game. The essence of adventure is exemplified by Torchlight’s cascading waterfalls, foreboding crypts, and tropical utopias untouched for centuries. Dungeon-crawling has never felt this captivating. The environments are a strong point for the game, nonetheless, the linearity of the randomly-generated dungeons was a nuisance for me.  There's a straight path leading you deeper and deeper, interrupted only by some detours into secret rooms jam-packed with gold or mini-boss encounters. 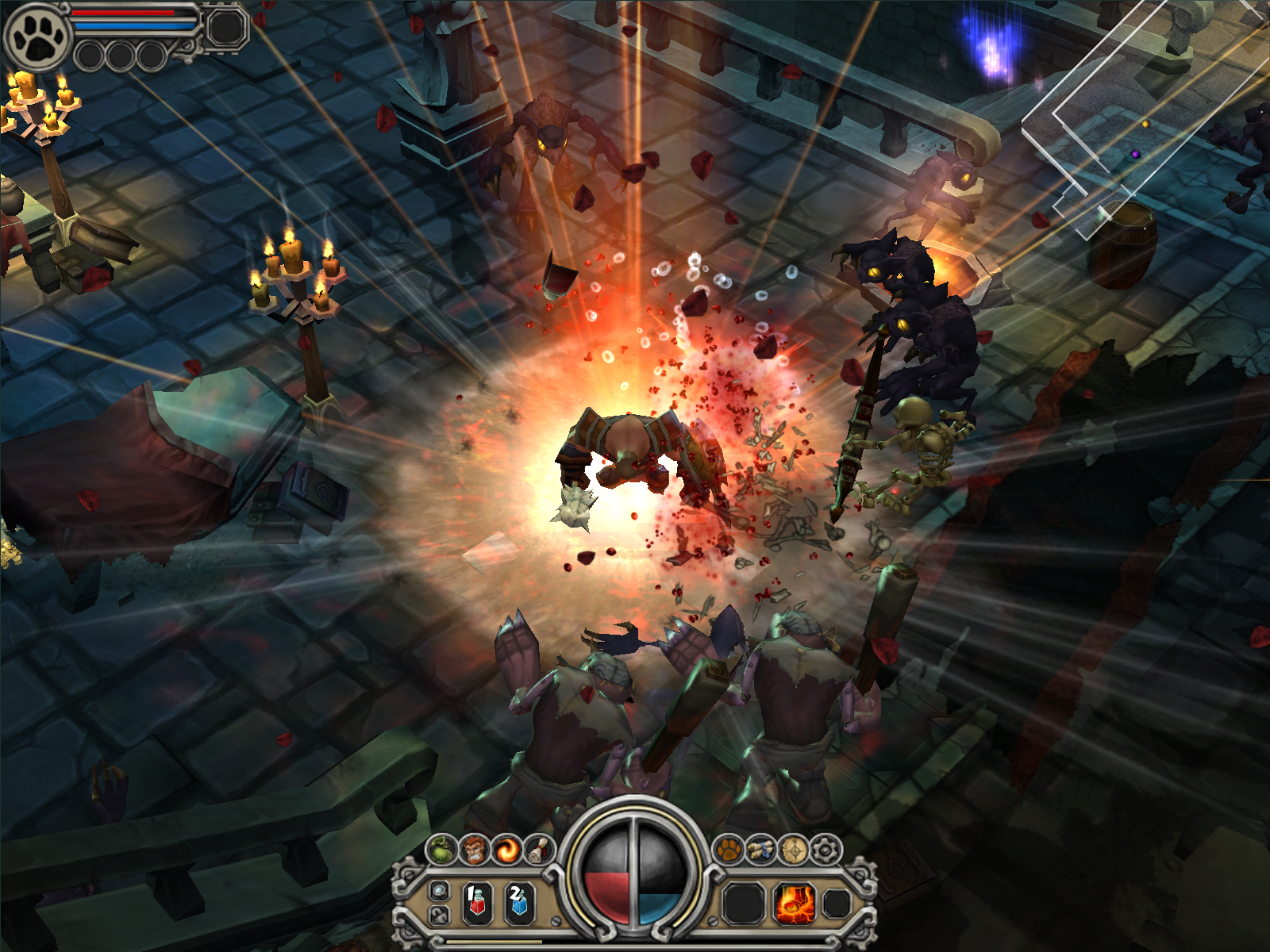 Enemies are artfully designed and varied, with a plethora of strange foes to face. Boss encounters are no afterthought for Torchlight, challenging you regularly and mercilessly. Regretfully, the bosses require very little skill and seem only to serve to slow down the pace of the game, which otherwise is smooth.

Second to combat, items are the most important element in any RPG-based dungeon crawler. While mundane weapons and armor drop at an alarming rate, the more rare and powerful loot is given to you at intervals, keeping the player somewhat in check. When worn in unison, several different armor segments can be equipped together to form a full suit, making the identifying* of loot thrilling.

*The process where you use a scroll to reveal a weapon or armor's unique enchantments. 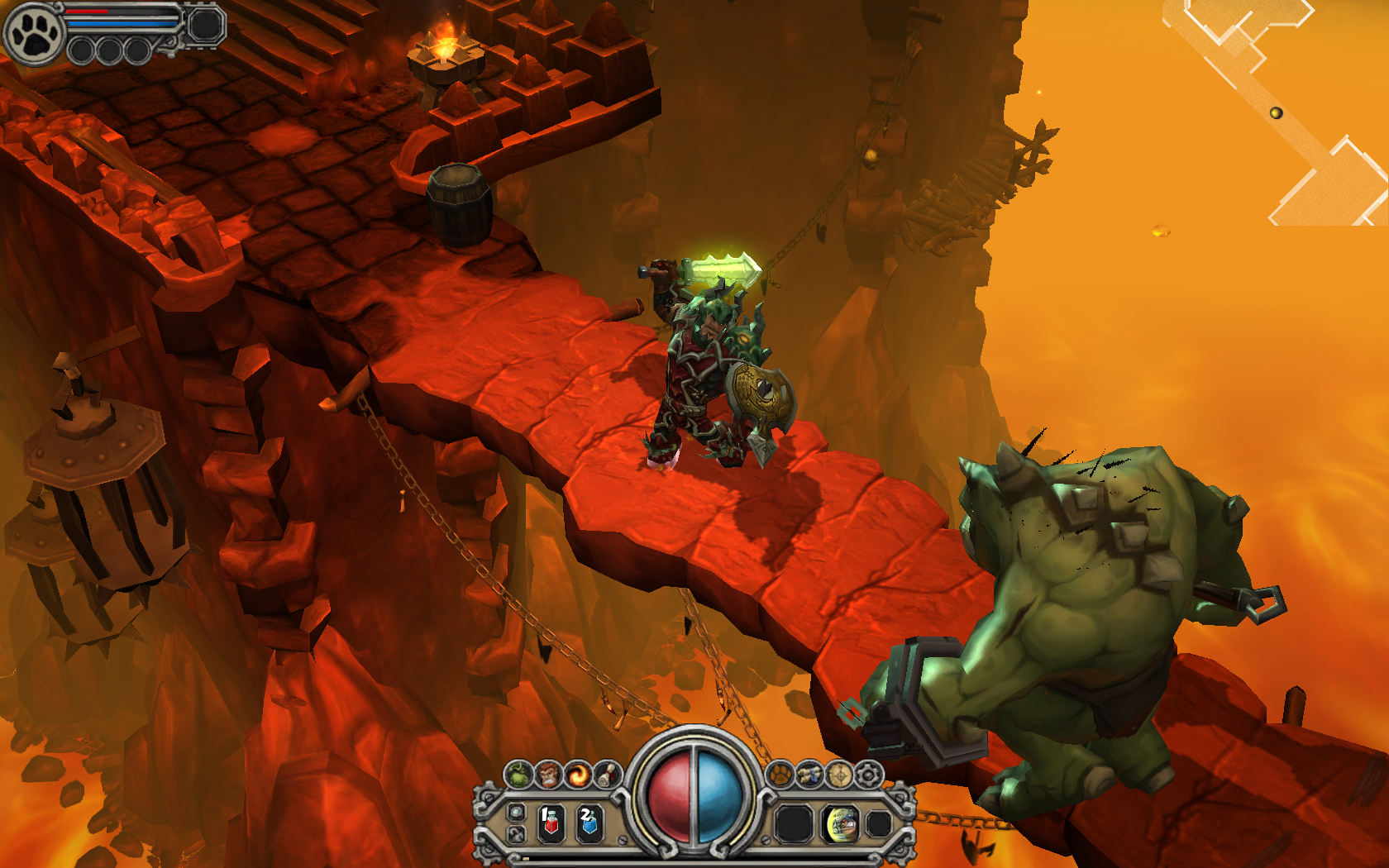 The graphics are subject to scrutiny or praise from different audiences. They are not the dark and twisted world you remember from Diablo, nor the pseudo-fantasy style you remember from Titan Quest, but slightly cartoony graphics, never taking itself seriously (after all, as you kill enemies they erupt like a geyser of blood). 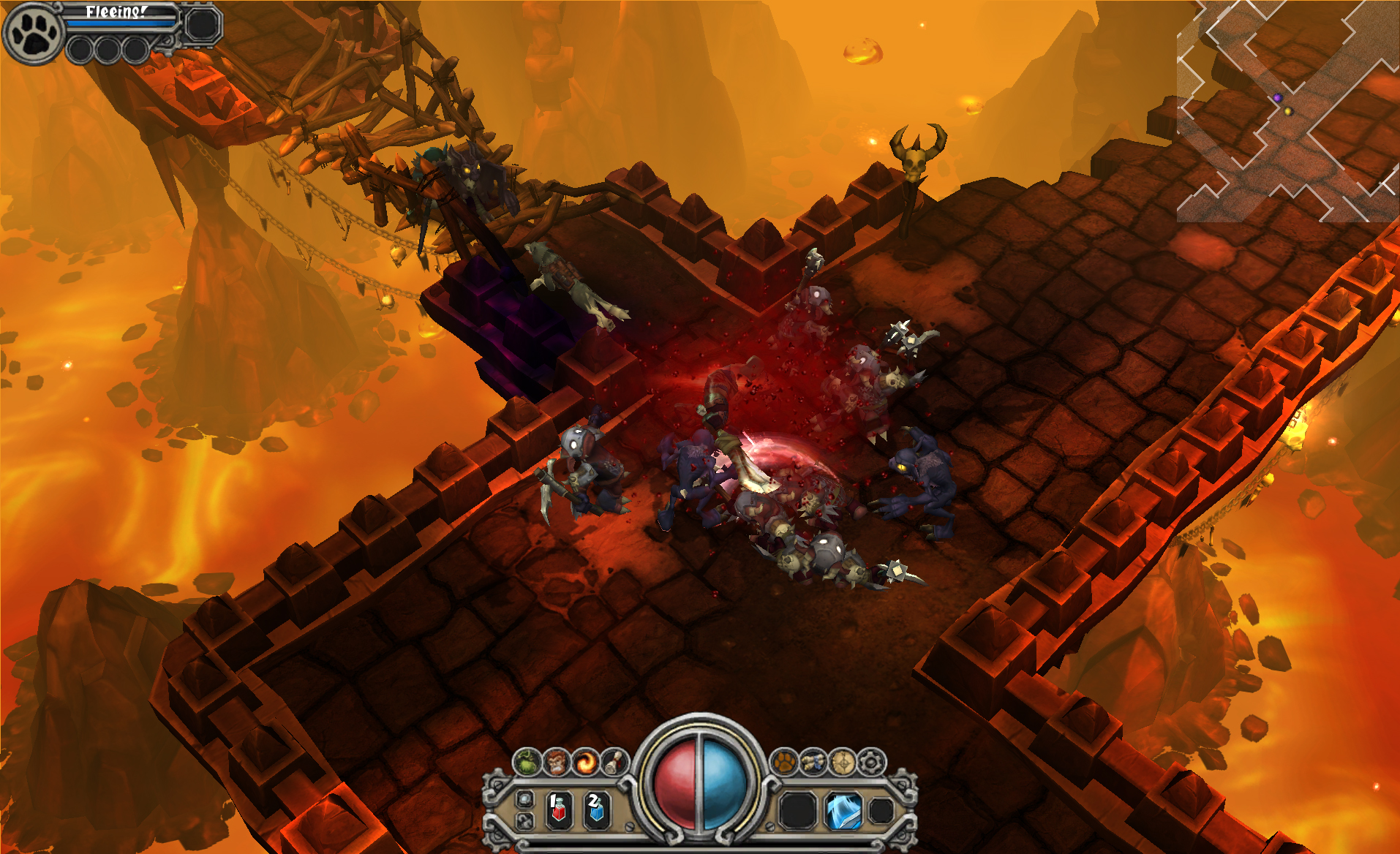 The soundtrack is nothing short of fantastic. Most RPGs tend too often to have loud, pompous orchestra banging at your ears, but Torchlight begs to differ.  While you unstoppably mow your way through hundreds upon hundreds of undead, shamans, kobolds, tribal monkeys with pitchforks, and all sorts of imaginable creatures, the music sets the mood perfectly. At times it can be goofy, like the game, yet retains the ability to instill that epic battle feeling when necessary.

The Good: Easy to get into. Smooth and polished combat. The art-style goes hand-in-hand with the design overtones. Surprising amount of depth. Musical score is one of the best I've heard from any game recently. Hardcore mode makes the game almost infinitely replayable – if you die, you have to start from the beginning.

The Bad: No multiplayer or LAN support! Dungeons are linear. There is no multiplayer! Only three classes, offering little variety in skill-trees. Lack of multiplayer or LAN. Design-wise, the game takes few risks to advance itself as an innovative masterpiece like Diablo did.

Overall: Runic Games has struck home with Torchlight. One can criticize the lack of multiplayer, which is a major turnoff, but given the style of the game, that is somewhat short-sighted. Torchlight is well-rounded and enjoyable, and that's what matters. Modders have already begun their work on creating their own content with the game’s included modding tools. Runic Games is building up a loyal fanbase as we speak, potentially increasing the longevity by leagues. The lack of multiplayer is something we can hope for by the grace of modders. Considering the $20 asking price (as of posting), I heartily recommend everyone to give it a try.