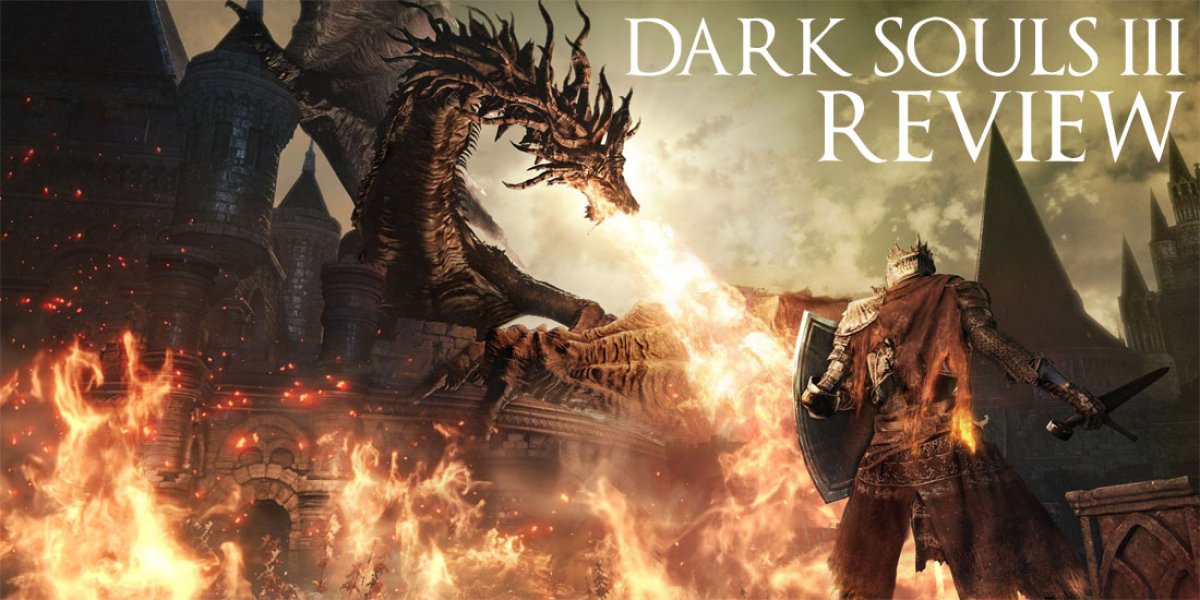 Gameplay in Dark Souls III is more complex than the average, pedestrian hack’n’slash game. Dodging, timing, and the speed of attack outrank character building in the hierarchy of importance, furthering the series' focus on skill-based progression. It's still got role-playing elements that run deep, though: Classes in Dark Souls III are constructed based upon stat point assignment, so the selectable pre-built classes are just characters with points assigned for their different equipment layouts.

The character used for the review starts at level 9, other classes in the game start in the level 8-10 range and thus provide an established foundation for play. More hardcore players can choose the level 1 character and decide how they want to play and equip it for themselves. All this really emphasizes that combat is more about how battle is handled and navigated, and less about the player character's power.

A Troubled Past with PC 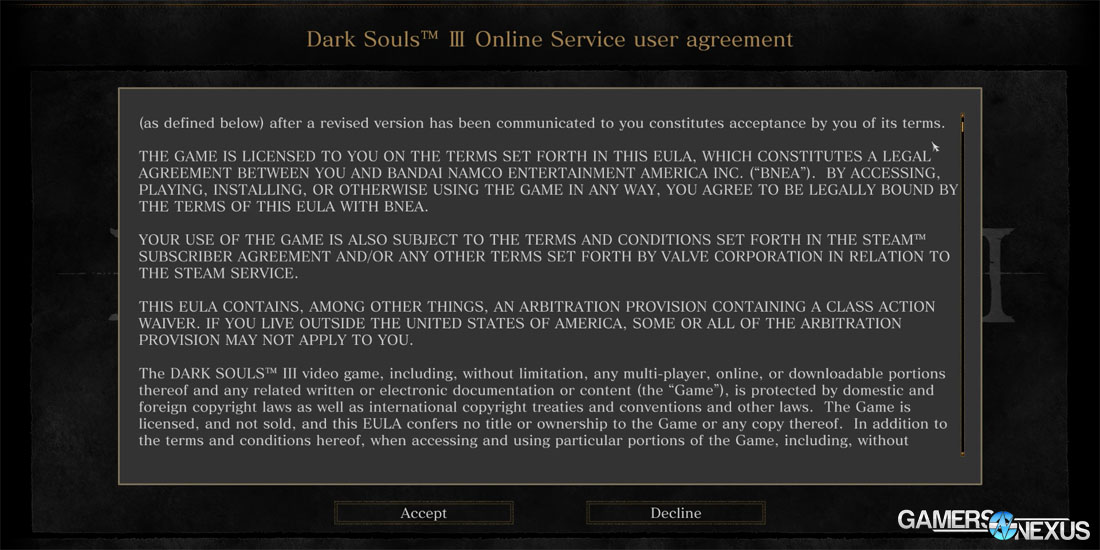 The first Souls game never made it to PC, and the second had some pretty major issues with the port. The last one, Dark Souls II, showed marked improvements over the first port, but still had some failings with its controls and FPS. This set us up for mixed expectations with Dark Souls III: if they could overcome problems with PC ports, developers FromSoftware would stand to make Dark Souls III a strong PC game this year; at first, it didn’t look like they had succeeded. 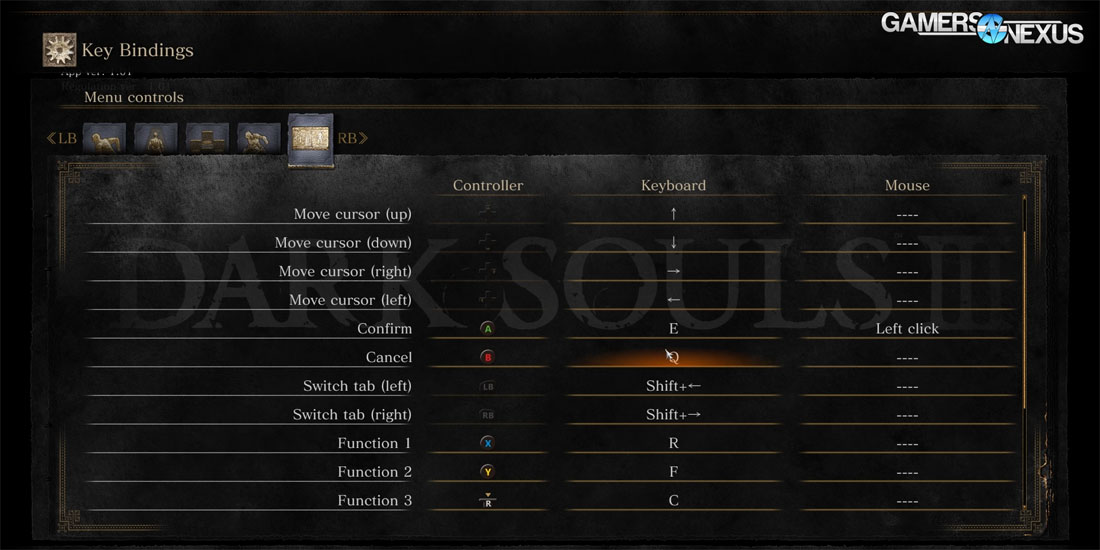 Immediately upon entering the game, we were greeted with something we never take as a good sign – controller directions on the menus and a giant “accept/decline” disclaimer, which disallowed use of the scroll-wheel. And the on-screen up/down arrows didn't work, either – nor did the scroll bar. We had to use the keyboard's physical arrow keys to scroll all the way down, then click the accept button. This is something that's only done once, yes, and it's primarily irrelevant to the game's reviewed content – but it's simple oversights like this that, frankly, we find offensive as PC players. How could the dev team overlook the scroll-wheel? Or a click-able, usable scroll-bar? They just seem like such trivial usability basics as to be considered default for inclusion.

And, like prior Dark Souls titles, the default mouse-and-keyboard controls were utterly nonsensical. The first groan-inducing showing of FromSoftware's controls ineptitude is revealed on the “Press Any Key” splashscreen – for which no keys work. Not even the Any Key. No, instead, you've got to click on the “Press Any Key” text. Menu navigation is worse. Navigating the options and settings menus isn't done with the usual Enter/Escape, or even spacebar, but instead with Q/E (“E” as accept/enter, “Q” as escape, naturally).

This was smoothed-over by a user-designated keybindings page (that we expect in PC titles), theoretically allowing change-of-command to any input preferred; however, the save & exit key didn't work. We really couldn’t change your keybindings at all. Disappointed, we shrugged it off, then dug-out a Steam Controller to see if its input schema had been better implemented. For a while, the Steam Controller worked fine, but we later encountered new problems with the Steam Controller's bindings. Not a good immediate impression.

All this said, FromSoftware handled the situation with poise. Sort of. The controls still don't make much sense, but a patch resolved our inability to save keybindings – they're now properly customizable – and also resolved the Steam Controller functionality. This shows a big step on the part of FromSoftware to address the problems with their PC port. In the past, the team's inexperience with PC gaming bled through, and they made no qualms about admitting missteps. Talking about Dark Souls I, producer Takeshi Miyazoe said this:

“This is going to sound bad, but our main priority was to get the game onto the PC as fast as possible, because people wanted it on the PC. The PC market in Japan is so minimal that originally there were no plans to make it on the PC, but with the strong petition from the North American and European fans, even with the lack of experience of working on a PC platform we still did our best to try to get it out as fast as possible. [The problems] were expected to a certain extent.

We did know there were PC-specific features like key-mapping and use of the mouse and keyboard, high resolution and higher frame rate, stuff like that, but... It's not that we ignored it, but it would have taken too much time for us to implement it, test it and get it up to the level people expected. It was more of a publisher (Namco Bandai) decision to say, ‘Guys, don’t worry about this – let’s just get it out and see how this works on PC.'”

Despite a rocky start, FromSoftware is really showing a desire to make this a smooth launch for the PC port.

Let's get into gameplay properly. 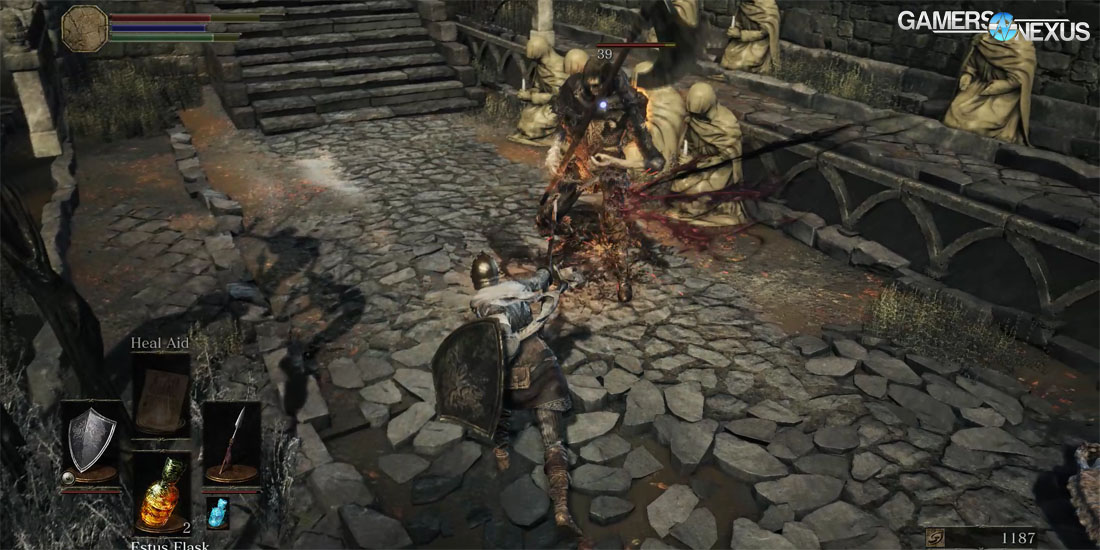 The Souls games have always focused on gameplay -- and the new addition is no different. The characters and plot work to support the gameplay, and not the other way around. For a lot of games, this just wouldn’t work – but FromSoftware founds Dark Souls III atop this principal, and executes the approach nearly flawlessly.

Combat is technical – it's about the details. Even against seemingly easy, mob-tier foes, timing attacks and blocks is critical to the preservation of the game's most scarce resource – health. 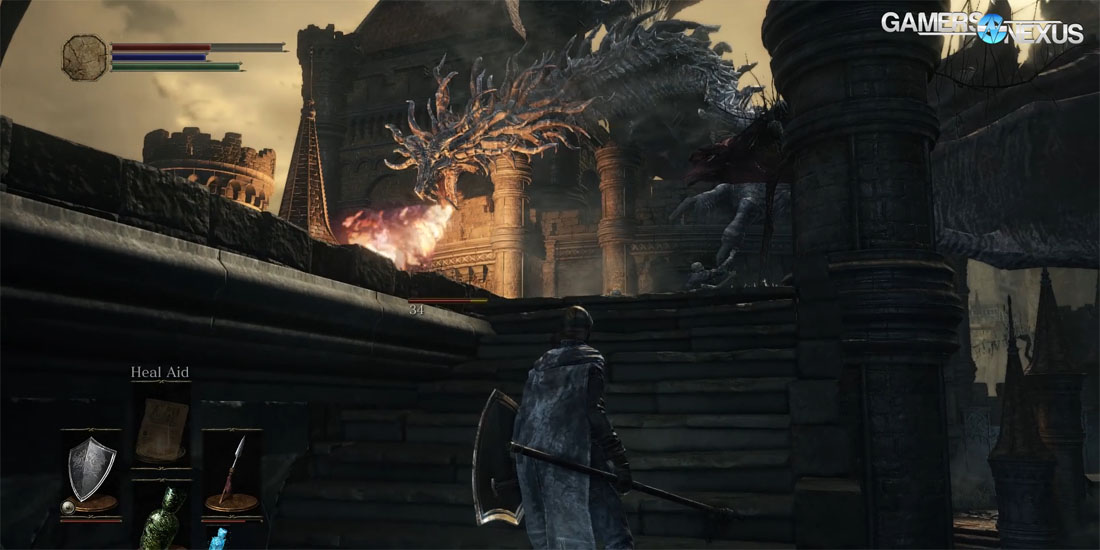 Dark Souls III doesn’t just hand-out checkpoints (bonfires), either. Death sets progress way back; it's not a one- or two-room loss. This is a game where attempting to cheat the system by running through rooms, exploring on the back-up that saves are 'free,' will be punished heavily. The nature of this approach means that combat can sometimes seem tedious, and mistakes in a new situation can cost a lot of play time, but it's for a good and rare cause in today's gaming atmosphere.

Growth is personally experienced by the player, and figuring out the challenge – overcoming it – is often the most rewarding aspect of progress. Fights are about strategy, planning, and execution, and there's nothing randomized about battle. Every time – every death – the fights are the same. The fights closest to the bonfire become easier not because the character got stronger, but because the player did. Learning each enemy's patterns and animations, the process of 'telegraphing' attacks, comprises the primordial essence of Dark Souls III's combat mechanics. The more a certain enemy is encountered, the more can be learned about it and the easier countering becomes. This gives fights – especially boss fights – a high level of personal satisfaction when dodges, dives, and swings are well-executed.

It's never the character who was just well-equipped, but the player who grew with the fight. This has always been the appeal behind Dark Souls being hard. The games are challenging, but rewarding – and they're not just hard for the sake of being hard.

Plot As a Service to Gameplay 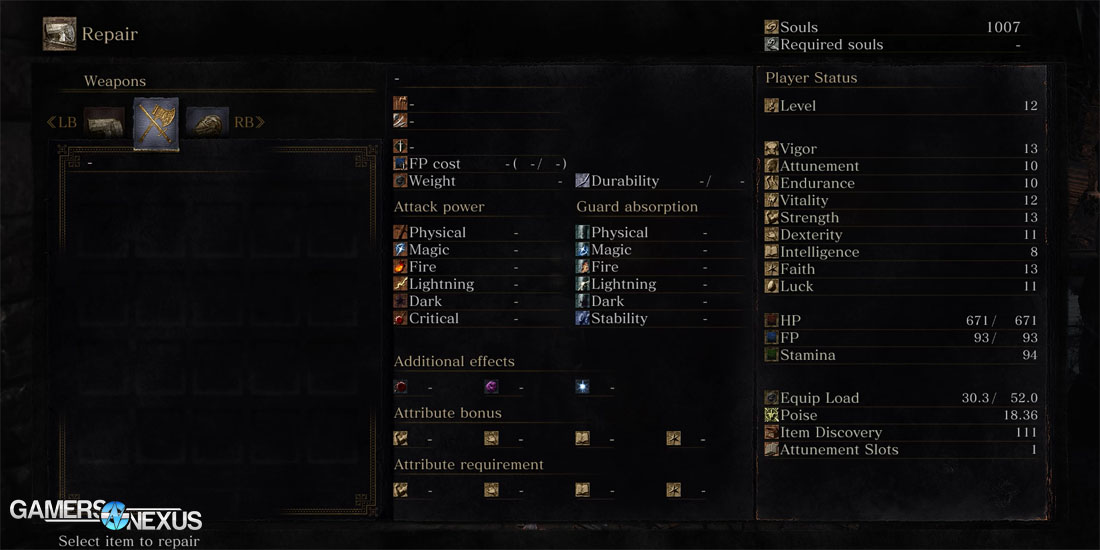 All this is to say why everything in-game serves the gameplay. The plot really isn’t what you’re there for. There certainly is a plot – you’ve been returned to life (or unlife) to save the dying planet – but the game never pedals the plot as anything more than an excuse to play. As players, story advancement was never our motivation to take to the controls; getting better was, and that's unique.

Levels in Dark Souls III aren’t exactly linear. They often branch. Sometimes the branches lead to the same place, other times a dead-end or a location that you’ll end up returning to. Levels are designed in a way that passages aren't obnoxious or confusing, making careful use of information conveyance to subtly help players figure out what's ahead. Even seeming background elements make an appearance later in the game; generally, if you can see a place, you'll end up going there at some point. This is an appealing turn for the game, and creates a larger world feel without ruining the linear challenge with watered-down open worlds. It's a refreshing sense of exploration when the backdrop is more than just a backdrop. There's a real sense of presence in the game when a quick camera pan reveals real locations, not just the video game equivalent of a matte painting.

Dark Souls' level design is complemented by the game's atmosphere. The world of Dark Souls is dark and gritty. The player character isn't a massive hero in this world, but one of many getting thrown against more powerful forces. Conceptually, this is displayed in how little the character stands-out in the beginning. Bosses and more elite enemies, by contrast, are detailed -- their armor is more intricate, weapons more fearsome, and physical size more imposing. The world itself seems to be on the verge of collapse -- much like Stephen King's Dark Tower series. As with previous games, multiplayer elements are limited to an effective “offline multiplayer” mode where other players leave behind messages to warn future passersby. It's functional, though also builds upon the “one of many” concept of the game. 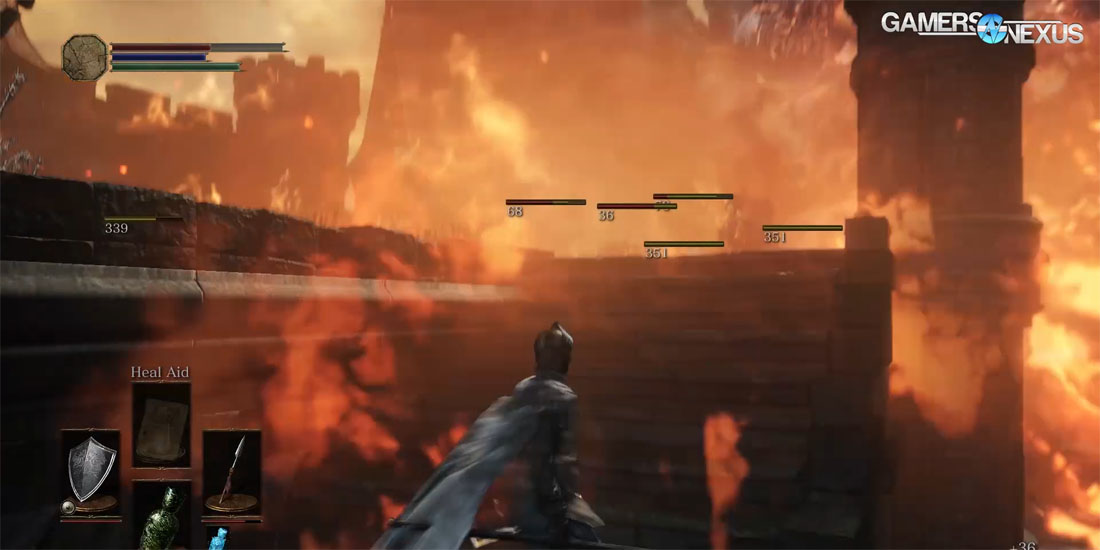 Combined with the difficulty of some of the mundane enemies, the tone and setting imbue the game world with a real presence. The gameplay itself is challenging and demanding, but does occasionally fall into the trap of being tedious. Creatures encountered are frequently as scary as they look.

On the PC side, FromSoftware seems to have solved some of the early issues with PC ports. Certainly not all of them – framerate is still locked to 60, and default menu controls really don't make much sense – but it's been a good move forward, especially with keybinding support.

Dark Souls III isn't going to be a quick playthrough for anyone (though one streamer did beat it in two hours), and it's a game that seeks some time devoted to progress. But if you're willing to commit to the challenge, Dark Souls III can be really rewarding for the player.