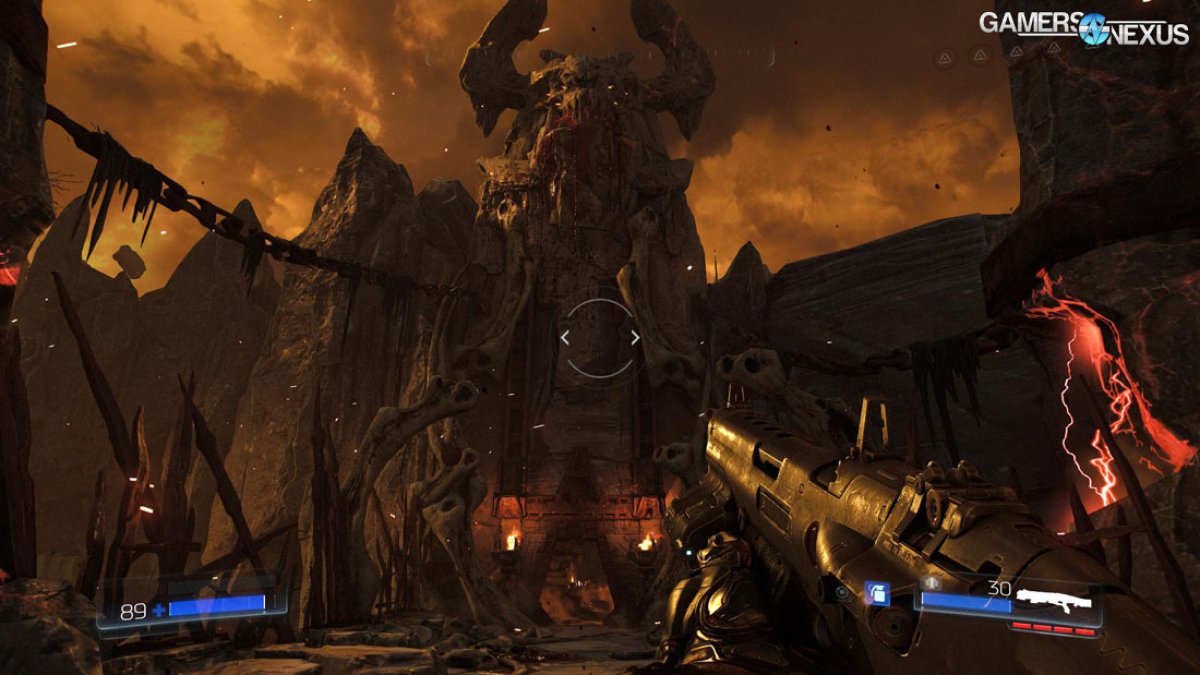 Doom has met this newer style partway. In multiplayer, a single account is leveled up and “hack modules” are unlocked, along with weapons and armor. A loadout is built with weapons added to the usual two weapons and grenade granted every match. Options are pulled from the range of guns found throughout the singleplayer campaign, hosting classics like the rocket launcher and minigun.

The armor pieces unlocked are purely cosmetic and alter how a character appears in-game, but don’t affect damage-soaking potential. Hack modules are set up before the match, with access granted as a match goes on. They’re mostly minor information buffs -- such as respawn timers for health and armor. 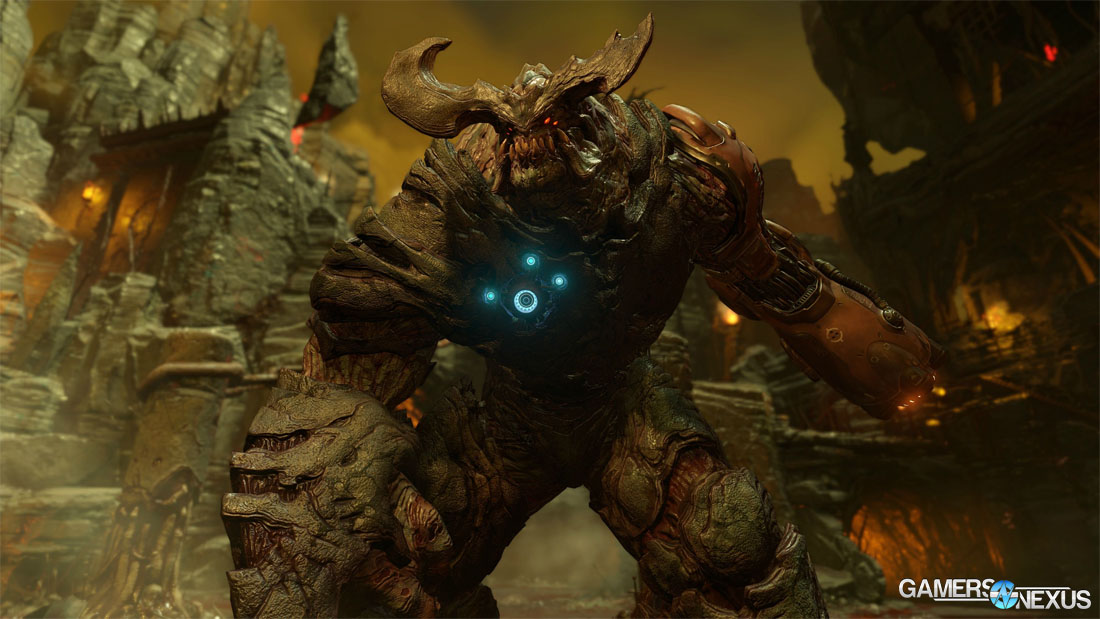 Doom throws back to older shooters in the maps and health systems. Health in Doom is as old-school as it gets -- you start with 100 health and can find more on the map. There’s no regenerating in this game; if you lose health, go find some more. Tough luck.

Armor is also a pickup / drop item, not to be confused with the cosmetic armor pieces unlocked for character progression. These are dotted around the map as health is, offering some extra protection akin to Quake and Unreal Tournament. Also like Quake and UT, the maps in Doom use a lot of vertical elements for more advanced mechanics and depth. There are plenty of platforms to jump on and passages to crawl, all on different levels and leading to different places.

Still, one of the most unique features in Doom’s multiplayer is the stand-out ‘Demon Rune.’ Like health and armor, Demon Runes spawn in a fixed location with long cooldowns (think: Redeemer). When collected, Demon Runes transform the player into one of the powerful and iconic demons from the franchise. A bit like the titans in Titanfall or heroes in Star Wars Battlefront, these demons are powerful enough that become a focal point in combat and tend to rack-up plenty of kills.

Notably, Doom lacks any free-for-all game mode in multiplayer. This seems to be a growing trend in online gaming at the moment.

Team games like League of Legends, Dota 2, CS:GO, and Overwatch are attracting a lot of attention at the moment. But, in a title like Doom, this seems like a massive oversight. Doom has no intrinsic team qualities. In the singleplayer, you’re a lone warrior type -- the last man alive. In multiplayer, despite the move towards loadouts, there’s no real class system like you’d find in Team Fortress or Wolfenstein: Enemy Territory. There really doesn’t seem to be any clear reason why a FFA format wouldn’t be present in the game.

That said, the biggest draw to Doom is still its singleplayer. As can be expected, the story itself is simple: demons have gotten loose, someone wants to open a gate to Hell, and only you are left to stop them. Likewise, the mechanics are also simple -- you can jump, you can shoot, and (very often) you punch. 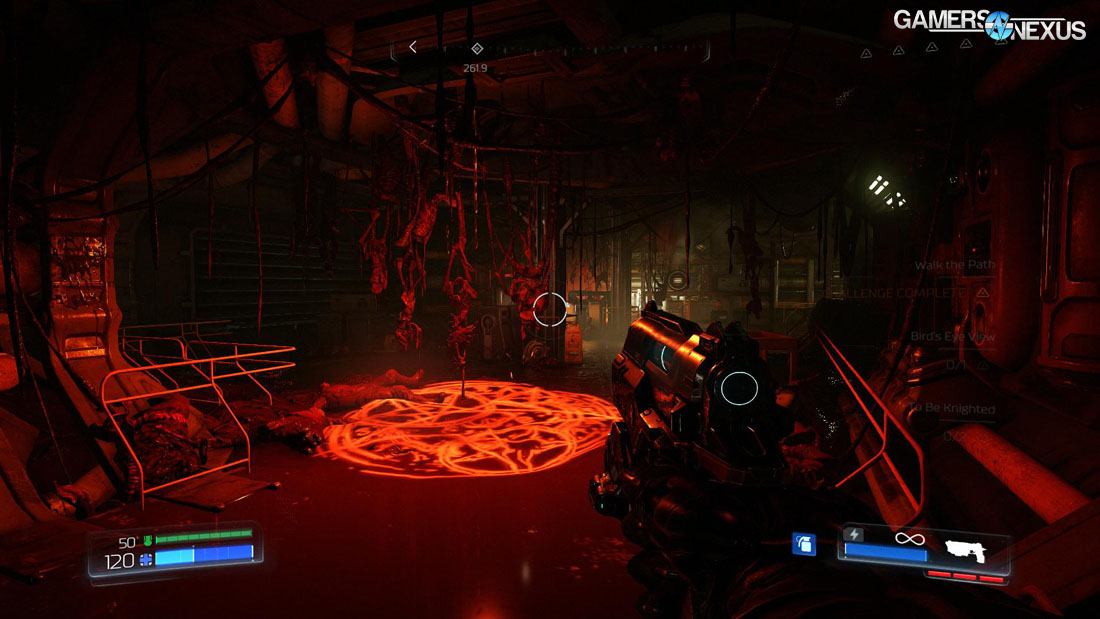 The environment and combat are always engaging. As straightforward as combat is, id has done a good job introducing new demons at the right times to reduce repetitive grinding. Even in fights where it seems like they’re just throwing more stuff at you to make it more difficult, the uniqueness of the different demons and design of different areas help keep engaged in the action. A core aspect of singleplayer gameplay is finishing moves. When demons are brought down below a certain damage threshold, they’re stunned and highlighted. Finishing moves (in this state) make for a bout of fun, one of which involves tearing limbs from the brutes and beating them into submission (“stop hitting yourself!”). Finishing moves offer mechanical interest by granting small health drops mid-fight. The chainsaw, somewhat similarly, also grants realism-defying mechanical advantages -- mostly dropping ammo. For a game like Doom, this mechanical decision is perfectly fitting.

The finishing moves themselves are highly violent: ripping off a demon’s jaw, curb-stomping a head in, and so on. Because of this, and because demons are either very good at getting up-close and personal or because they have more powerful guns than you -- you’re always in the thick of it when it comes to combat. There’s never really an instance of standing around sniping or waiting for enemies to spawn. This is all framed around the delightful way in which the character responds to everything -- namely, with great violence. Whether it’s taking keycards, picking up upgrades, or stopping energy filters, he’s always savage about it. There’s something refreshing about this approach when compared to characters whose interactions entail making typing gesture at a computer.

As can be expected from an id FPS, the campaign is full of collectibles and optional tasks. Collectibles range from secreted-away upgrades to marine action figures, and many of them require more than a little gamesense and snooping. In addition to satisfying the completionist in many of us, collectibles help unlock more upgrades at the end of a mission.

Mission tasks are usually pretty straightforward -- “find X,” “kill y number of z in a unique way,” and so on. If you’re not a completionist, these upgrades certainly aren’t mandatory. The upgrades fall into two main categories: those that affect armor and those that affect weapons.

Armor upgrades are passive and offer protection from specific types of damage or additional map information -- helpful things, but not strictly necessary. The most common upgrades are for weapons. Each gun in the game has two alternative fire modes that are unlocked throughout (not always granted freely). Spending acquired upgrade points changes how those guns function; for instance, the pistol has an alternative fire that zooms slightly and charges the shot. Pistol upgrades make the cooldown shorter, allow full movement speed in this mode, and decrease the charge timer. These upgrades aren’t necessarily a huge part of the game, but serve to give a little incentive to explore for secrets or accomplish tasks. 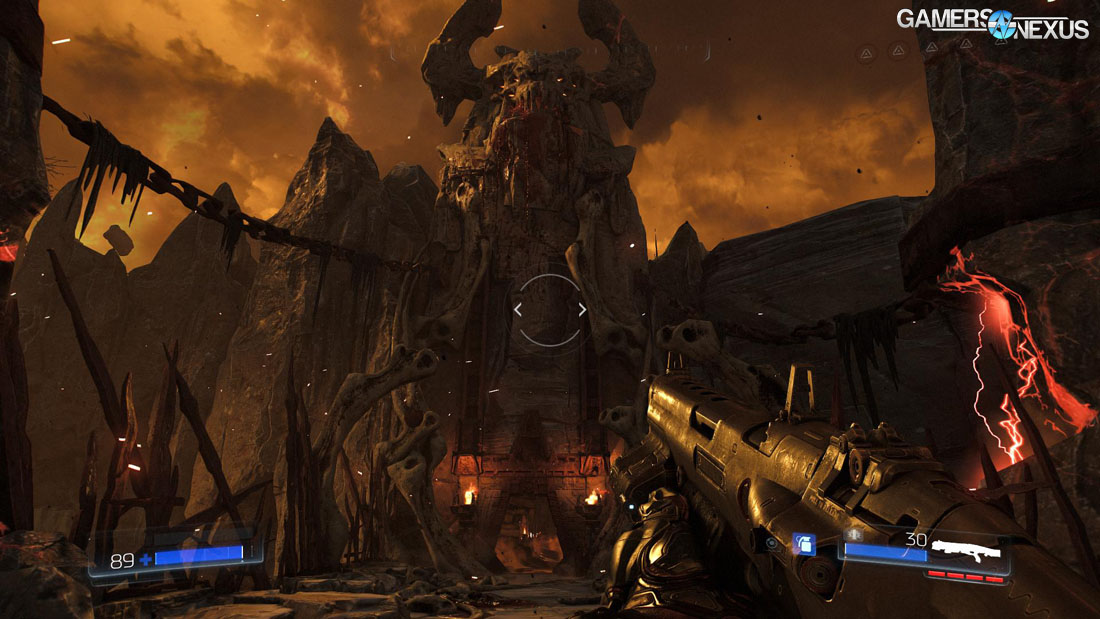 Doom has a lot to give, visually. The environments are well-crafted -- lighting makes the main path easy to find, but darker paths offer something alluring in their own right -- and appeal to the level design senses in all of us. The Mars facility looks like something out of sci-fi favorites such as Star Trek or Alien. It’s industrial, but filled with futuristic screens and machinery, interrupted frequently by satanic symbols and a lot of gore -- like something from a Scandinavian death metal band.

Everything in the game shows that a lot of craft backs its environments. Even changing weapon mods feels thought-through. There’s more than ammunition -- the gun’s look on-screen (and feel in combat) are all modifiable. Places where the demons have been on the Mars facility are clearly translated into visual cues, which gives a subconscious feeling of dread or security based on the signs.

Hell is a little different. Many of cues remain the same -- you can see where other marines have been, but the level design shifts from the Mars facility. Hell is more vertically designed than Mars: rocks float chaotically in the air, flying demons are introduced, and by this point, we’ve got a double-jump function. 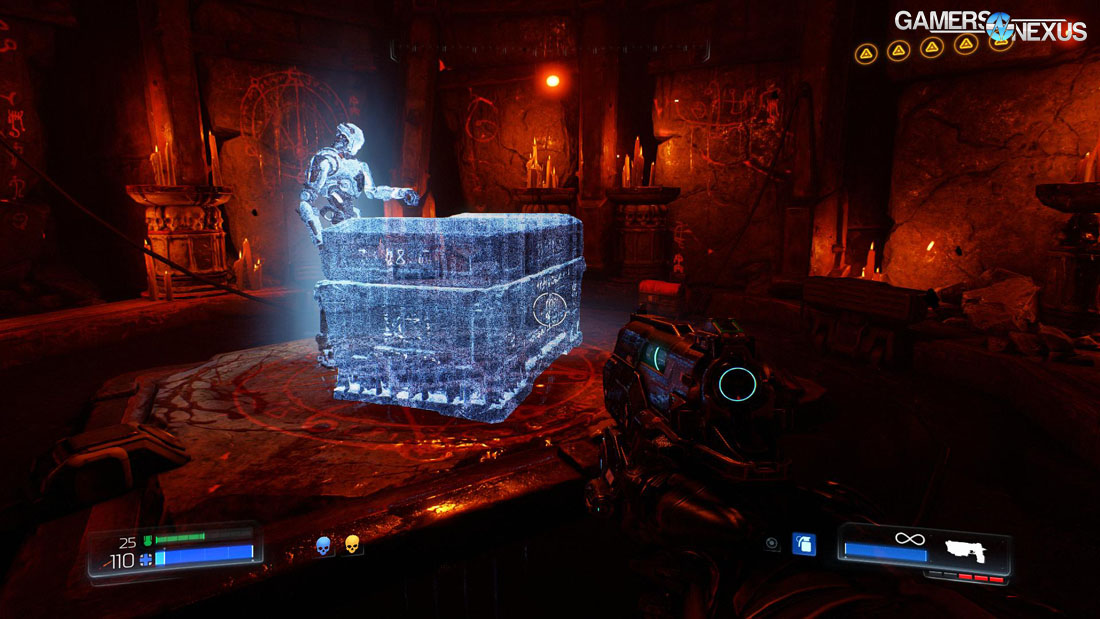 Doom’s music is also meant to add to the ambience of the game. It only triggers when you enter demon-heavy areas, creating the intended “suspense” effect. A sudden spike in music puts the player on edge when combat starts, but that music is a fairly generic sounding heavy metal sort. Not bad and of good service to the desired grating and unnerving feelings. After a while, I found myself becoming slightly annoyed whenever the music started -- the song changes in each level, but they all sound more-or-less the same. Any effect of the music ended up being lost on me upon this realization.

The real draw to Doom is its singleplayer mode. It’s fun, engaging and, in a grotesque way, pleasing to look at. The game itself seems to emphasize how much more important the singleplayer portion is. Just going from the main menu to the multiplayer menu requires the game to restart itself and bring up a fresh, new loading screen. Despite striking a balance between older games like Quake and more recent ones like CoD, it’s hard to pin down why you’d play it over say, Star Wars Battlefront. We did also experienced some crashes when we were loading the game for the first time, but they seemed to have resolved themselves after that first launch -- for us, at least. The single-player campaign, despite the simplicity of writing (or perhaps because of the simplicity of its writing) is an engaging experience. Seeing how the character interacts with the environment, the variety of finishing moves, and the worlds id Software has created make the campaign worthwhile.

If you’re curious for performance metrics and technological discussion, see our Doom GPU Benchmark over here.