﻿Scribblenauts was one of those games that I saw at E3 and thought "would I ever play that? Next!" Turns out, a lot of people are magnetically inclined to play a game where the only limitation (lame, I know) is your imagination - case and point, Spore. So here I am writing about a game that I never intended playing because you asked for it. Does that mean I'm famous on the Internets now? I think so. Bow before me while I spout the opinions I have while you pretend to care. When Scribblenauts is boiled down to its base elements it's a puzzle game at heart. It has moments where it pretends it isn't, trying to pass as a platformer, but it's not. The aim of the game is to collect a star, present in each of the levels. The star can either be always apparent, in which case the puzzle is how to get to the star, or invisible, where you have to make it visible by accomplishing a specific puzzle-based task. 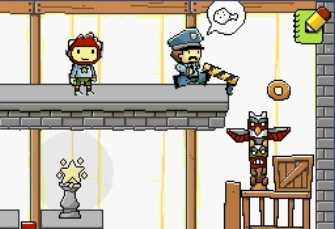 On the surface it sounds like a nice pick-up-and-play puzzle game, and is to a certain extent… but the game unfortunately falls short with the main concept – the only limitation being your imagination. There are objects which can be conjured into the game world that maybe Hawking would have thought of, but never me. One level had a shark that killed me every time I went into the water. I couldn't shoot fast enough or swim fast enough to avoid him. Apparently one of the only ways to get past him is to summon a black hole. Yes! A black hole! I would have NEVER thought of that off my own back. Not in a million years. The way I ended up playing the game was asking myself "How would I cheat here?" and then conjuring whatever I could think of, whether it's a black hole, wings or the devil. If I could use it to cheat my way through a level then it was summoned. 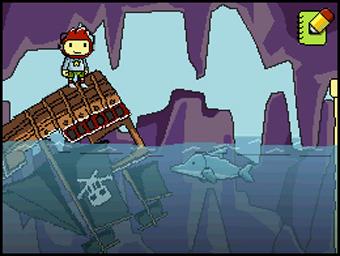 In all seriousness though, this isn't a game breaker. It just requires you to change the way you think about puzzles a little, well, unless you’re already a dirty cheater. Not entirely a bad thing, the industry could always use some new ideas, but maybe I'm too stuck in my puzzle game ways to really see how I was supposed to play the game in the first place. The only aspect of Scribblenauts that was almost a game breaker for me was the control scheme. It's one of those “simple” tap-where-you-want-to-go control schemes, on paper it sounds like fun, but in this game it's almost to a point where it's utterly broken. Nothing is more frustrating than finally figuring out a puzzle only to have the character fall into a pit because he jumped when you just wanted him to walk. I thought this was just me, pointing wrong or something, but there's no way to force the character to jump, he just does it when he thinks it appropriate, normally not coinciding with when the player thinks it's appropriate. Frustration ensues. 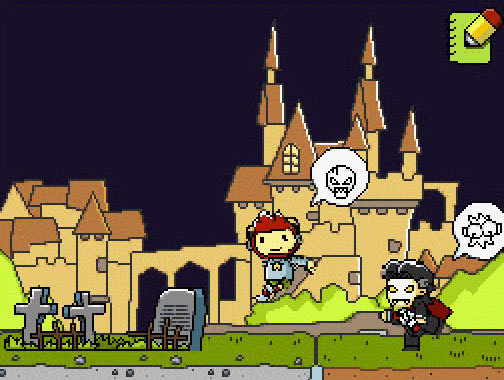 If you love the Professor Layton games then you'd also love this. The puzzle element is there. There's a little bit of a story element, the option to go back and do a level in advanced mode and the levels are short enough that you can play a level or two even if you're just waiting for the bus. Not a problem. I would recommend Scribblenauts to those in need of a good platform-based puzzle game. It has decent puzzles and forces the player to think outside the box, always a good skill to have for the big wide world. Kids and adults alike will all find hours of enjoyment with Scribblenauts. Control scheme is a bit pants though.

Short Term: If you're picking up Scribblenauts and playing one or two puzzles then there are really not a lot of puzzle games better. In the short term the control scheme doesn't seem as patched together and the puzzles themselves are really enjoyable once you get your mind to work in the way that it's intended. - 90

Long Term: Personally I don't think that Scribblenauts is a game that's intended to be played for more than about 30 minutes at a time. The controls are terrible and you will probably find yourself throwing the DS against the wall screaming “solve that!” - 60

Overall: If you're a connoisseur of puzzle games, especially for the DS, there's no reason for you not to pick up Scribblenauts. The puzzles are thoughtful and thought-provoking, and the use of spelling in order to summon the item you want helps younger children learn how to spell. Perfect for puzzle loving adults and general game loving kids. Too bad about the control scheme though. I don't know what's wrong with just using the D-Pad. It's on the DS. Use it! - 75