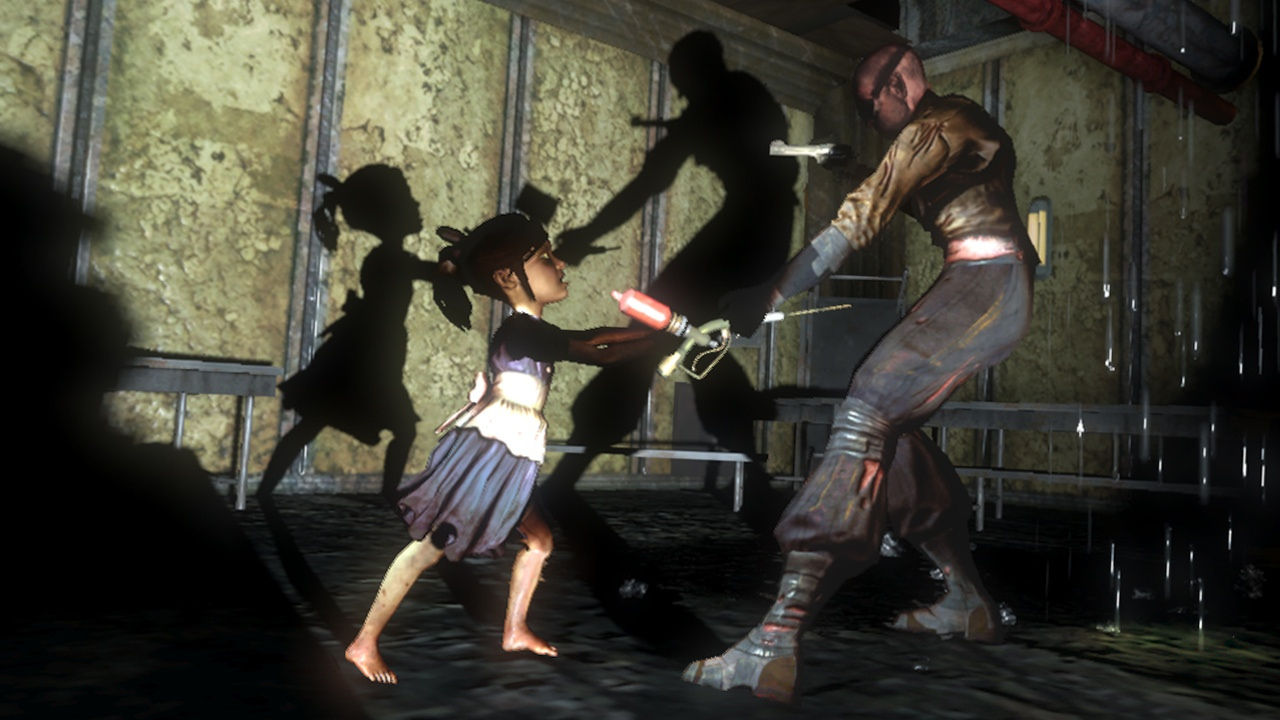 A splicer takes candy from a little sister.

In Bioshock I always wanted to play as a Big Daddy. They walked around guarding the little sisters from the “drug addicted” splicers. Now you are the Big Daddy. After being dead for 10 years, Delta has been resurrected via a Vita-Chamber. Delta’s main goal is to find his “little sister” Eleanor, but it will not be so easy, Rapture has changed a lot in 10 years. 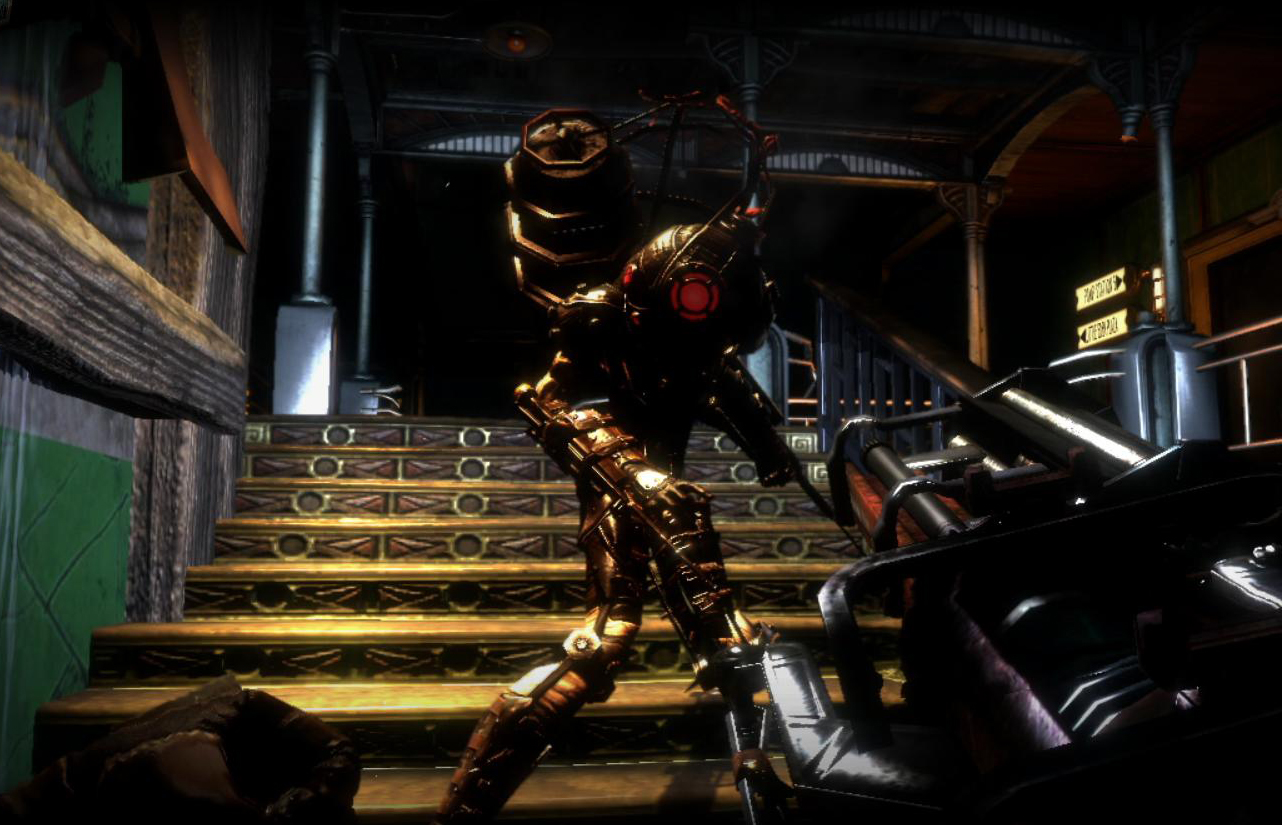 Building on their mistakes from Bioshock, 2K has improved and added many gameplay elements. You can still obtain little sisters after you defeat a big daddy, except you may adopt them as your own and use them to your advantage. The little sisters can harvest ADAM for you, the chemical the ‘bad guys’ are addicted to, but the catch is that you need to protect them from splicers while harvesting. After the sister is done harvesting you are given the option to harvest her or rescue her. You gain more ADAM from harvesting her, but if you rescue her it may be more beneficial in the long run. You are never truly alone in Rapture though, and will find out quickly that the gaze of a Big Sister is upon you. You are prone to attack at any point of interaction between you and a little sister. 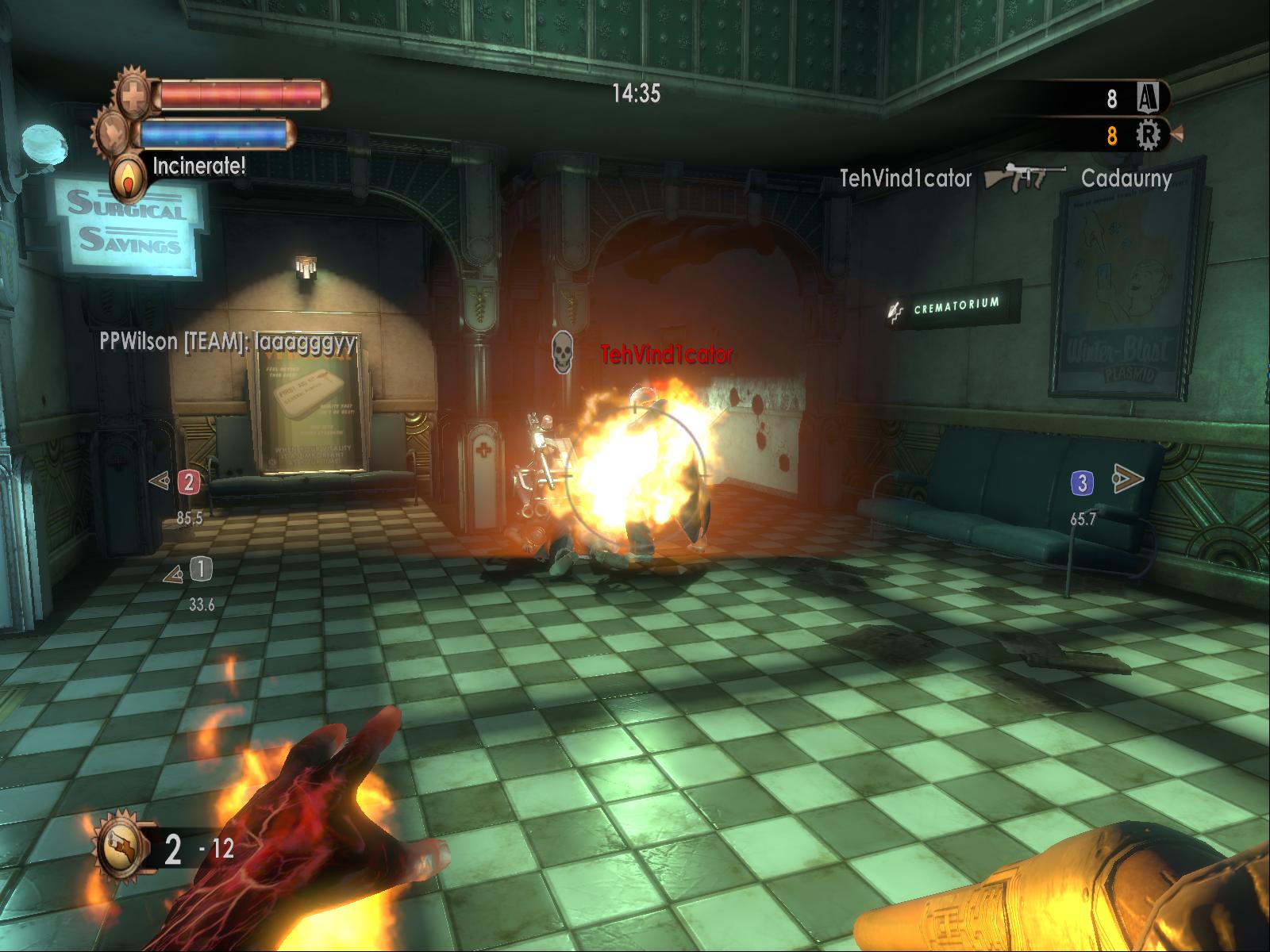 I was disappointed to find that once you beat the game there is no going back. Those eager to beat Bioshock 2 early might miss out on hidden combat or easter eggs, and there is no “I’ll do it later” – unless of course, you mean next game. If you follow the objective indicator the whole time it is likely you will pass up intriguing side quests and additional story background. There are a lot of hidden recordings laying around, often filling you in on the happenings in Rapture, but there is no way of going back to hunt them down. I strongly suggest exploring every corner of the level before you depart. 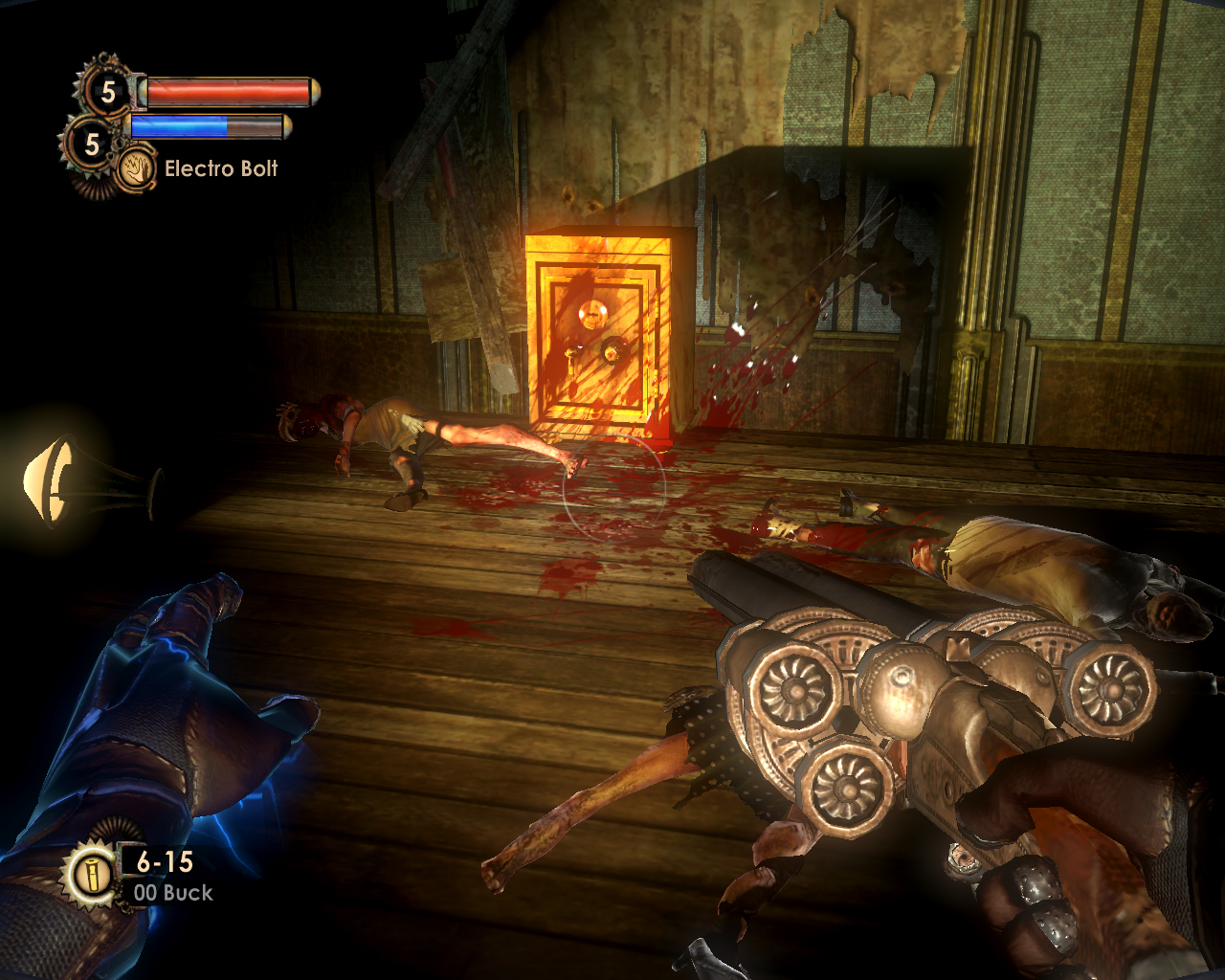 Graphically, I could not tell the slightest change. Both Bioshocks are close enough in visual quality where it won’t be something you drool over or frown upon. Granted, this was reviewed on the Xbox 360 version. For veterans of Rapture, you’ll notice new plasmids, weapons, and enemies to fight. They more than make up for the graphic improvements that never came.

Short Term: The game is perfect for casual gamers. There are no pesky save points, so that means starting and stopping when your time permits. Rapture is huge, enabling particularly adventurous gamers an option to explore and find recordings, kill some big daddies, and protect little sisters. The storyline does require some time and patience. Bioshock 2 can be played in short jaunts or long hauls, just have your gear ready.

Long Term: With the added multiplayer there is additional incentive to play the game after you have beaten it. The PC version had some hiccups to start with, though impending patches are planned to fix existing lag problems. The Xbox version doesn’t have any problems with multiplayer, and it truly lets you appreciate what 2K Marin did with it. Multiplayer has its own little storyline to it, and of course has several modes of play. It’s nothing earth-shattering, but mindlessly blasting other players with your plasmids and shotguns is unnervingly entertaining.

Overall: 2K impresses once again with Bioshock 2. Whatever comes next could benefit from improved multiplayer, other than that, playing a Big Daddy was an awesome change of pace. You can even look forward to it in MP. Those who have not played the original Bioshock should indulge themselves before picking up the predecessor, you’ll miss a lot of background.