Most of my gaming time is allocated to the PS3, I have a steady stream of games I receive from the 'Rental People' so that keeps me busy for most, if not all, of my time. That's no excuse for missing out on indie games like Zombie Driver. Digital distribution channels, such as Direct2Drive, Steam, and GamersGate have brought indie games to the forefront of the industry in recent years. With Zombie Driver, I thought I'd found just what I'd been looking for. 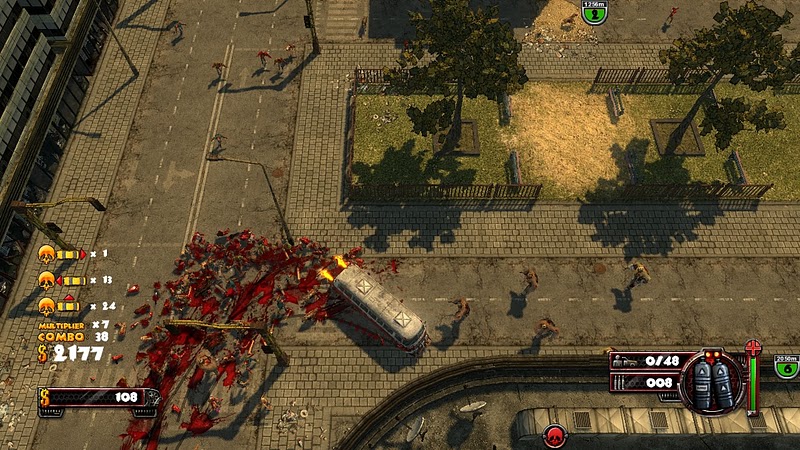 As soon as Steam told me “You can now play Zombie Driver,” I reached for the mouse to start the vehicular manslaughter. The game greeted me with a gorgeous comic book-style cinematic. I was ready to roll…over the zombies, that is. 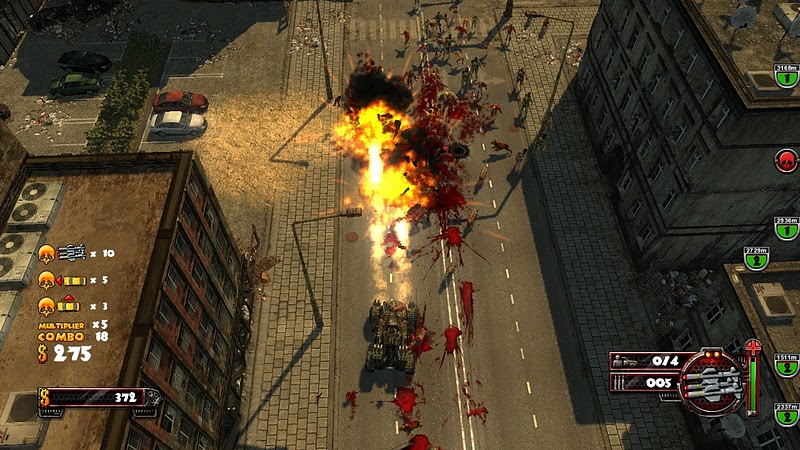 It’s a generic zombie story, nothing too original. Zombies are here, they're hungry for brains, any brains, even gamer brains. You play an able driver, eager to drive off into the blood-drenched streets and pop a few zombie heads under the wheels. The story does what it's supposed to: it gets you ready for each of the missions, gives you a basic understanding of what you're supposed to be doing in the mission, then lets you go. Zombie Driver doesn't emphasise the story all that much, and for good reason – why would you delay drifting around corners, massacring any that stand in the way? Unique gameplay definitely makes up for everything the story lacks. 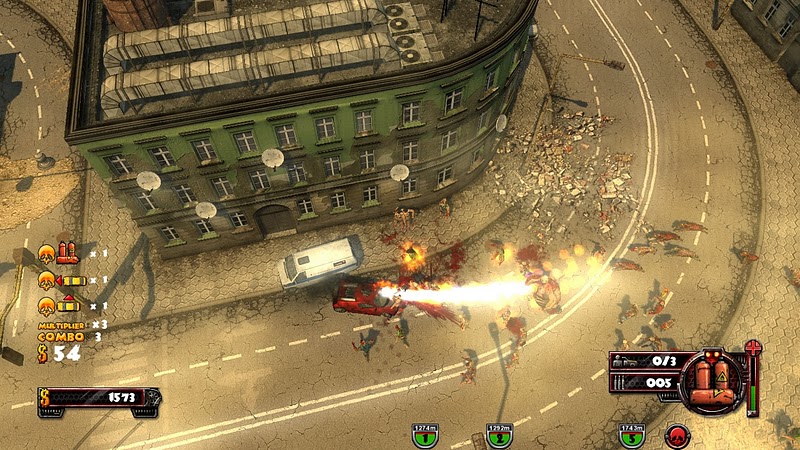 The game trailers cut no corners. It's as good as all the videos make it look, but then again, who wouldn't enjoy grabbing a bus and parking it on a pile of filthy zombies. That one screenshot is the whole reason I wanted to play Zombie Driver. A little on the annoying side, the camera constantly attempts auto-correct itself, making it so you always drive upward. While I was doing donuts in the car to take out some particularly stubborn zombies, the camera spun uncontrollably, making me dizzy in an effort to “correct” itself. There is a “Static” camera option, but I didn't find fixing the camera to the orientation of the car really helped that much, I would have much rather had a true static camera. As in a camera that didn't spin at all, only moved around. The keyboard controls can be awkward at times, making it one of the few PC games that plays better with a gamepad. 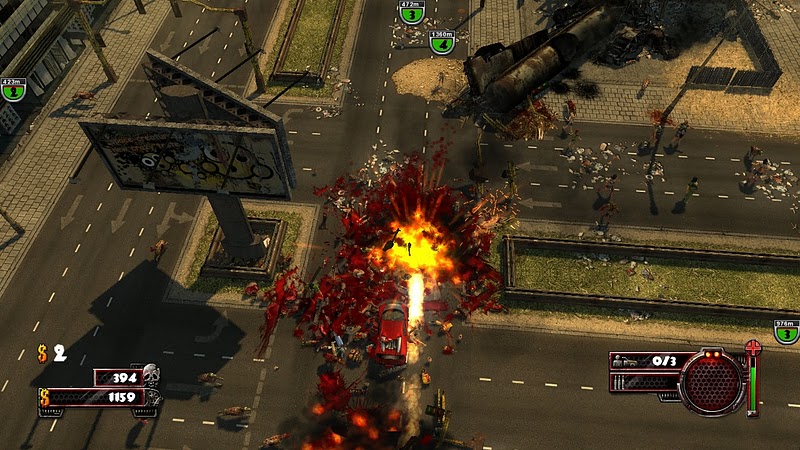 The vehicles in Zombie Driver are your standard fair. Nothing fancy. A taxi for collecting the most passengers and a decent speed, a sports car for getting places fast, and a bus for absorbing damage and painting the road with zombie brains. All additional vehicles are based on those three major classes. Personally, once I'd gotten the bus that's pretty much all I used. Who cares about getting anywhere fast when you can drive through just about everything on your way there? Weapons are pretty much the same basis: nothing new, but entertaining in this setting. The flamethrower definitely turns the heat up, though. Find a pocket of zombies, light one or two of them ablaze, and watch the whole lot go up in glorious flame-grilled awesomeness. Who knew zombies were so flammable? VWOOSH!! The AI isn't that intelligent, but c’mon, we’re talking about zombies. As long as they're not walking into walls all the time I'm happy. Granted, there’s nothing wrong with some splattered cadavers against the exterior of Grandma’s house.

Zombie Driver is an affordable, unique game, and supporting small studios makes everyone feel warm and fuzzy inside. If the keyboard controls bother you, it’s effortless to attach a gamepad. No configuration is necessary and you'll have a lot more fun. Reflect back to the original Grand Theft Auto, where you'd drive on the pavement to try and take out as many pedestrians as you could – Zombie Driver is like Grand Theft Auto… with zombies. And car-mounted flamethrowers.

Short Term: The levels in Zombie Driver are nice and short with separate mandatory missions and secondary missions. Admittedly, I most often found myself wanting to plough through some zombies. Don’t judge. - 79

Long Term: Every time I mow the lawn I think of Zombie Driver. I finally found an outlet for my urge to obliterate rotting undead. Other than that, there's no real reason to play through it again. Doesn't mean I wouldn't want to though. - 67

Overall: Unless you're abhorrently against the complete and utter massacre of the living dead, there’s no reason not to play Zombie Driver. If you like driving games, buy it. If you like massive amounts of blood and gore, buy it. Even if you just enjoy a nice drive through the streets obliterating the odd drooling resurgence of the recently deceased, buy it. What's stopping you? Grand Theft Auto without the guilt. Great stuff.