Aliens force you into a corner, gnawing at your shiny codpiece and clawing at your rifle. Your back hits the wall – that’s it, you’ve officially run out of room. Toss a ‘nade an’ look away. Coast is clear. You catch your breath and start to heal, that’s when the wall behind you explodes with slimy, crawly nasties. Nothing is more horrific than that, especially the codpiece gnawing, *shudder*. 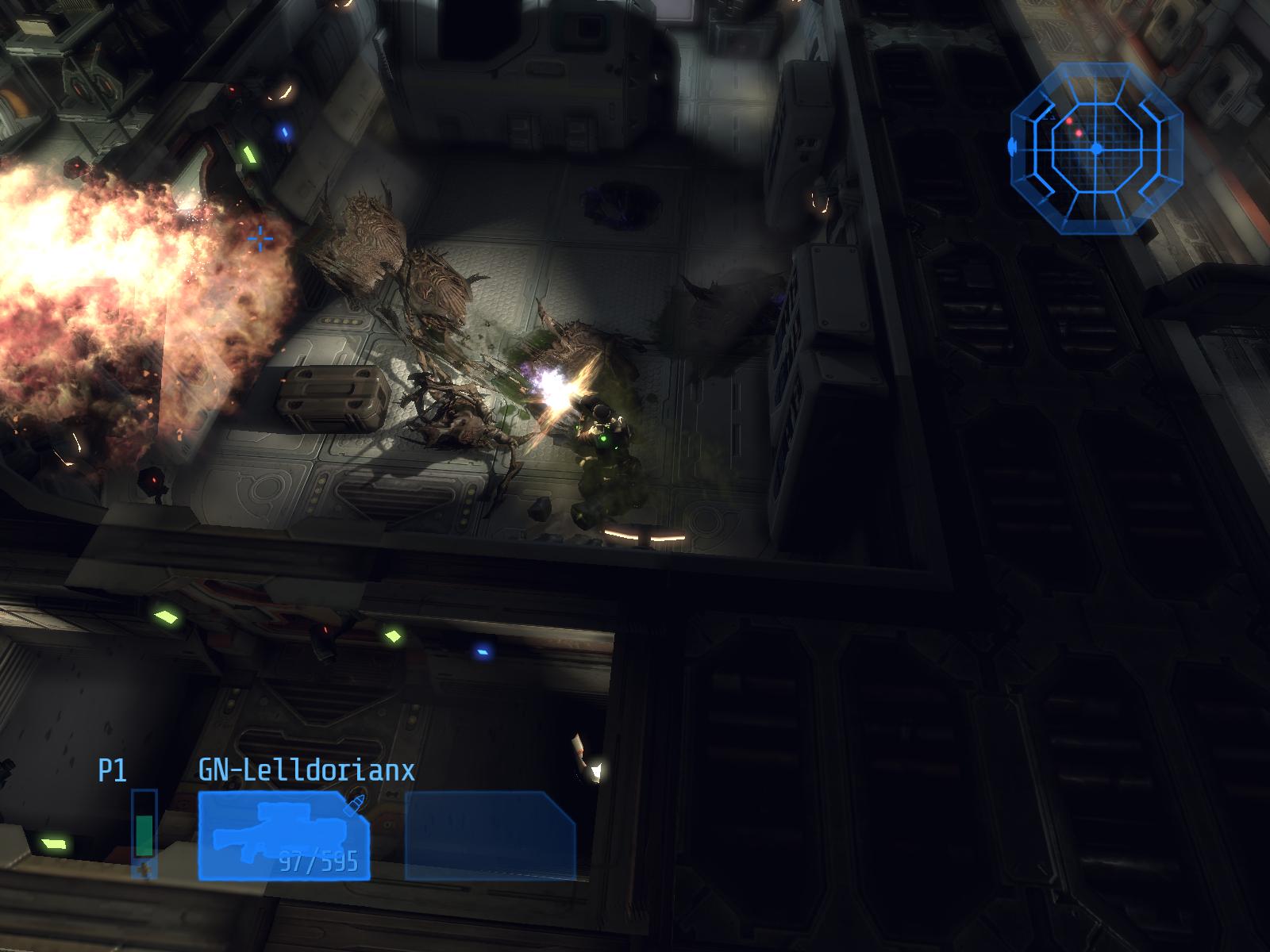 Switching between the Flamethrower and Rifle rapidly, classic.

Although it may sound like a fluffy intro, it’s not. The very essence of Alien Breed: Impact is embedded in our carnal instincts: kill things. All things. Things that move, things that crawl, things that don’t look human. Impact is the isometric survival-horror sequel to Alien Breed: Evolution, and Team 17 says to expect a 3rd episode in the future. The story is simple: You’re on a ship in space, the ship hits another ship, things explode, people die, and you kill everything. The opening comic ‘cinematic’ gets you prepped and ready, but beware of the laughable voice acting and script. Impact makes it clear from the get-go that it is not a story-heavy game, even if it has to do it in a manner that has you groaning up until the first wave (which, I promise, is when you’ll stop laughing and start crying). 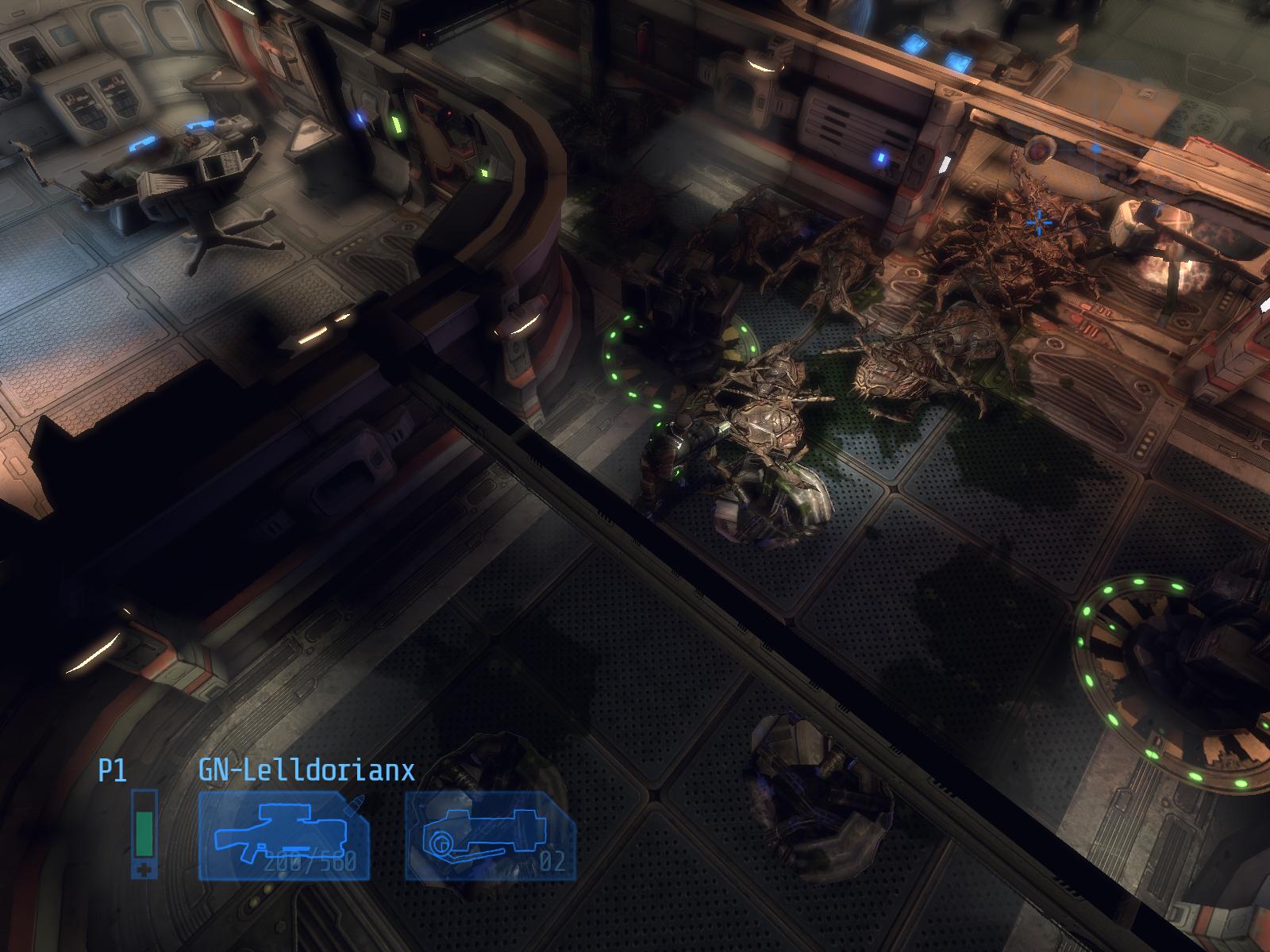 Calmly form a single-file line and wait for your execution number to be called.

Let’s move on to the main attraction: aliens. The aliens seen throughout the game can be summarized as the twisted lovechild of the original Alien and StarCraft’s Zerglings and Hydralisks (with the occasional Ultralisk, or boss alien). More important than the aliens? Their remains. With any luck, you’re going to see more guts and corpses than living creatures, and the most difficult setting will require that luck. Things may seem easy to start with, but believe me, the eerie music and ever-present dripping conjure a horrific paranoia that you are being stalked, probably because you are. The game is bursting of ‘mindless shooter’ at the seams, yet I still found myself immersed in the slimy gore of my nemesis for hours at a time, eventually dwindling down to steady 30-minute bursts after the novelty had worn off. The beasts burst through floorboards, ceilings, walls, gaming computers (or do they?), and anything else that is generally digestible in the bowels of an alien, including human torsos. They heal each other, spit acid, and rush the player, all just as mindlessly as the core concept, but the array of creatures does create some strategy. 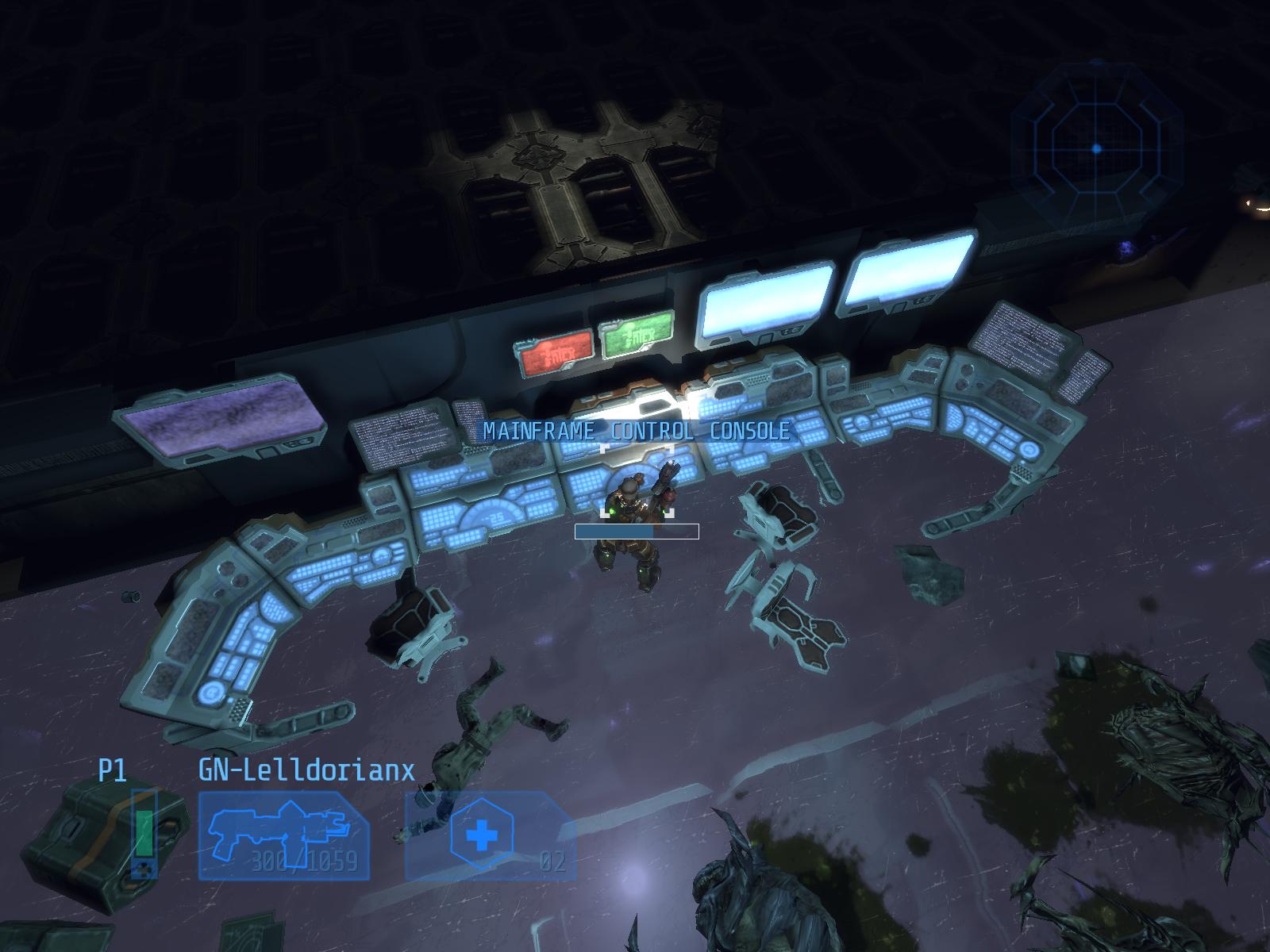 It won't be long before you cry at the thought of a console.

Unfortunately, that’s where it falls a little short. The game’s scope was never supposed to go beyond ‘kill things’, and that’s obvious when you analyze the story. Some unknown ship crashed into yours, unleashing boatloads of creatures across both spacecraft. If one man (that’s you) can take out hundreds, even thousands of these creatures alone, you have to wonder what they think about the humans. I mean, if one guy can kill so many, why would you keep attacking? Even surrounded by the corpses of their friends, they continued to charge me. If they cannot deduce that this human is no simple snack, how did they get into space in the first place? To quote Lieutenant-Commander Data in the Pakled episode, ‘how they ever mastered the rudiments of space travel is a genuine curiosity.’ Maybe they infected a human ship and just floated around until we came along. There is more explanation in the data pads found across the ship, but you will find it tough to dedicate attention to things like reading when you could be shooting. 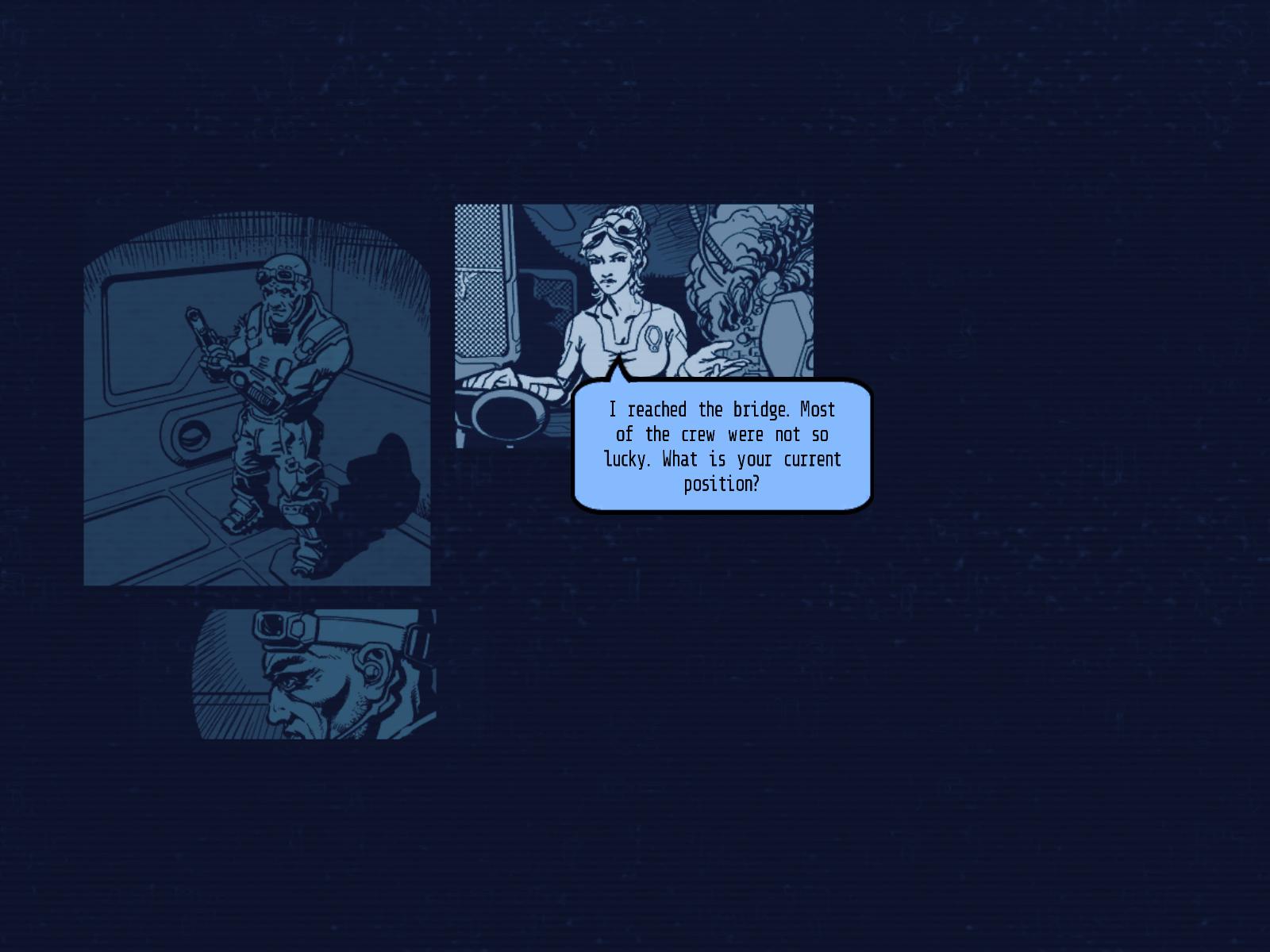 In the future, all female androids are built with breast-embedded voice-boxes.

I am admittedly a hardcore gamer, and while the skill level is relatively minimal, upping the difficulty to max will prevent the tempting option of literally sprinting through levels without firing a single shot. They amass overwhelming numbers, and in spite of alarmingly exploitable AI, aliens do have the ability to take you down. Speaking of waypoints…

The missions and objectives are fairly abecedarian. Run to a console, hold down the action key, find out that IT has restricted your access to this console (you’d think they would learn after the first few times), proceed to the next console to unlock the previous one, return to the previous one, action key, unlock the door, get the next mission and repeat. Not mind-blowing game design by any means, but Shepherd Book once said “how you get there is the worthier part.” He was right, but he didn’t mean the scenery, unless you count the insides sprayed all over the walls as paint. Just remember: there’s no shame in glancing to see if that shadow you ‘saw’ in the hallway actually exists.