YADG is an acronym that I have coined for games like Din’s Curse and Torchlight. Even though Din’s Curse reflects the core attributes of yet another Diablo-esque game, it takes a vital step away from its industry brethren and toward the evolutionary world of dynamic gameplay. 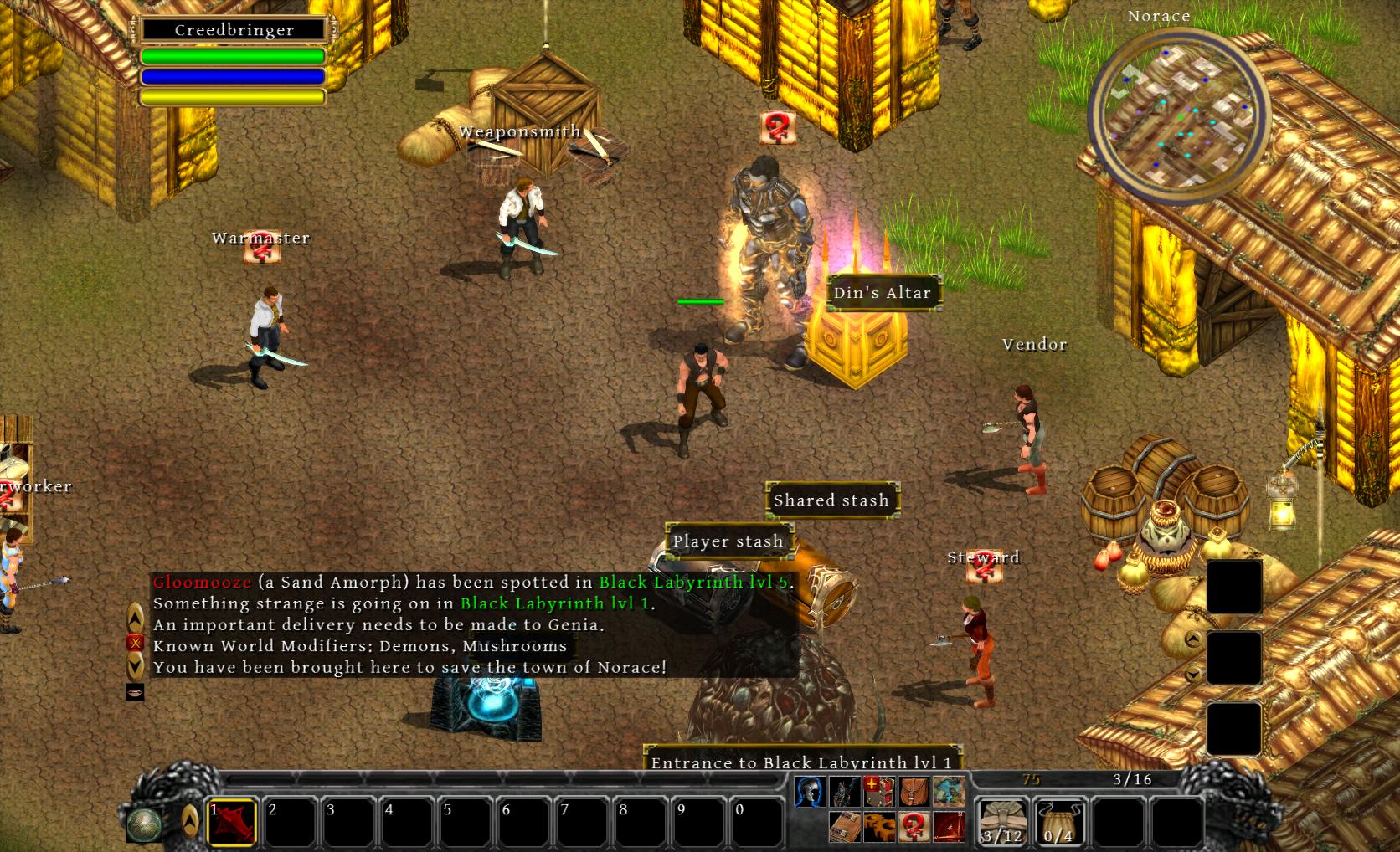 Both demons and mushrooms ail this town? We're doomed!

Any tabletop RPG veteran understands one thing: if you fail your task, the world will mirror that. Didn’t warn the king about an advancing army in time? Too bad, all the king’s horses and all the king’s men couldn’t put the grotesquely dismembered king back together again. Din’s Curse engages the player in a changing environ in effort to demarcate itself from the set-in-stone ancestry that is Diablo, Torchlight, Dungeon Runners, and Alien Breed. The worlds and dungeons are randomly generated, each spawned with quirks – no vendors, prone to storms, demon infestation, to name a few – and prevalent dungeon factions – undead, orcs, ‘evil leprechauns’, and any developer would be remiss to forget demons. 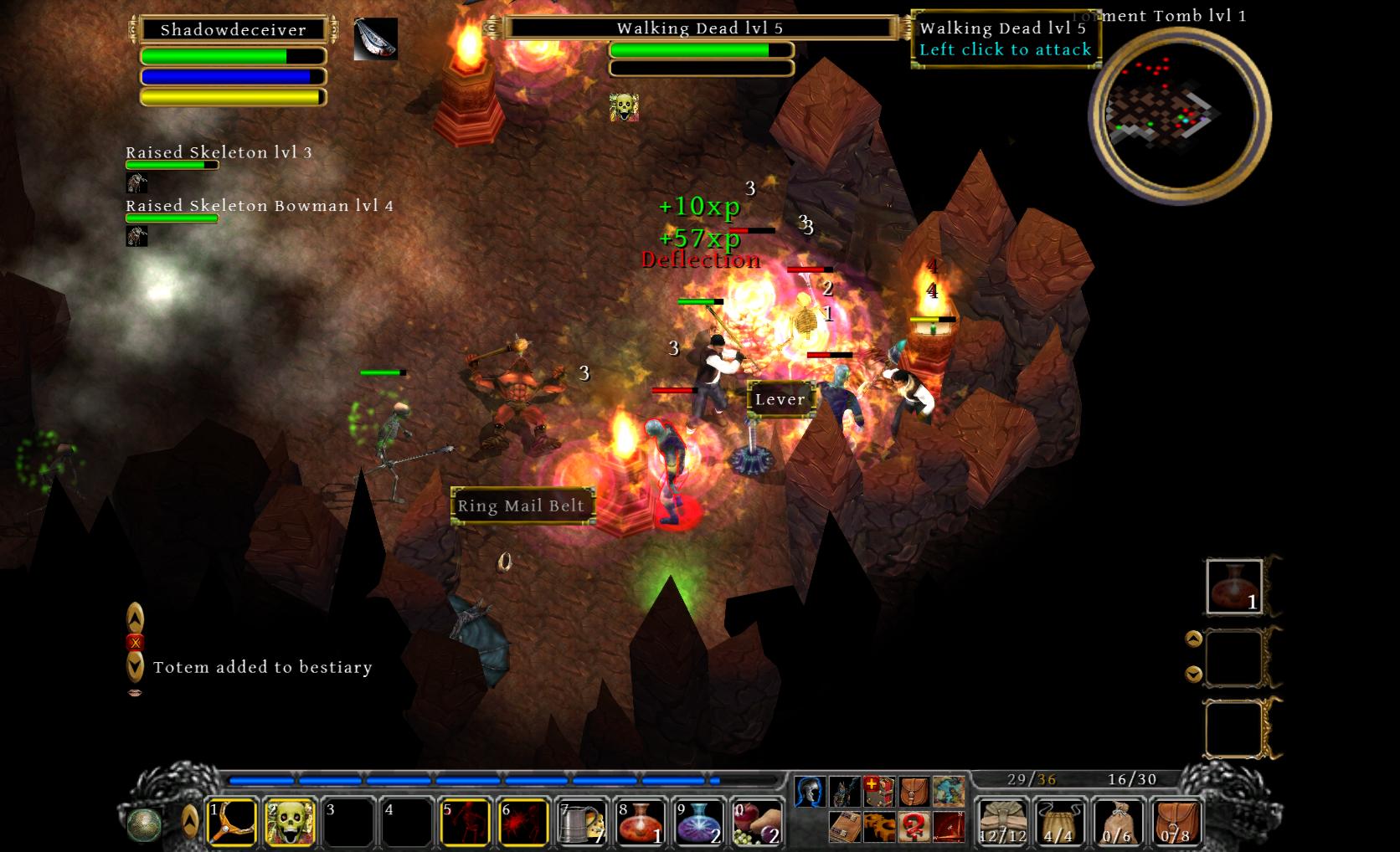 You’re probably thinking, “different factions in random dungeons, great. Where does this game get cool?” Here’s where: the factions will openly war with each other to secure their floor of the dungeon. An undead overlord may rise up, vanquishing all of the resident orcs, and inevitably cast his eye upon your town. Just like the earlier mentioned tabletop games, if this disturbance goes unthwarted long enough, dispatching raiding parties against the town is not outside of his reach. Slay the lich, and you might have just saved the town. That is, until an opportunist from another faction gains a foothold. Fail to defend your town, and the deity who has enlisted your eternal services flings you into another needy group of peasants. If you are unhappy with the vendors, dungeons, or even the color of the ground, there is no penalty for generating another town (and its underlying dungeons) until one satisfies your appetite for destruction. You can keep your character, forever changing towns and nemeses. Saving a town results in reward and upgrades, which gets you prepared for harder monsters in the next one. 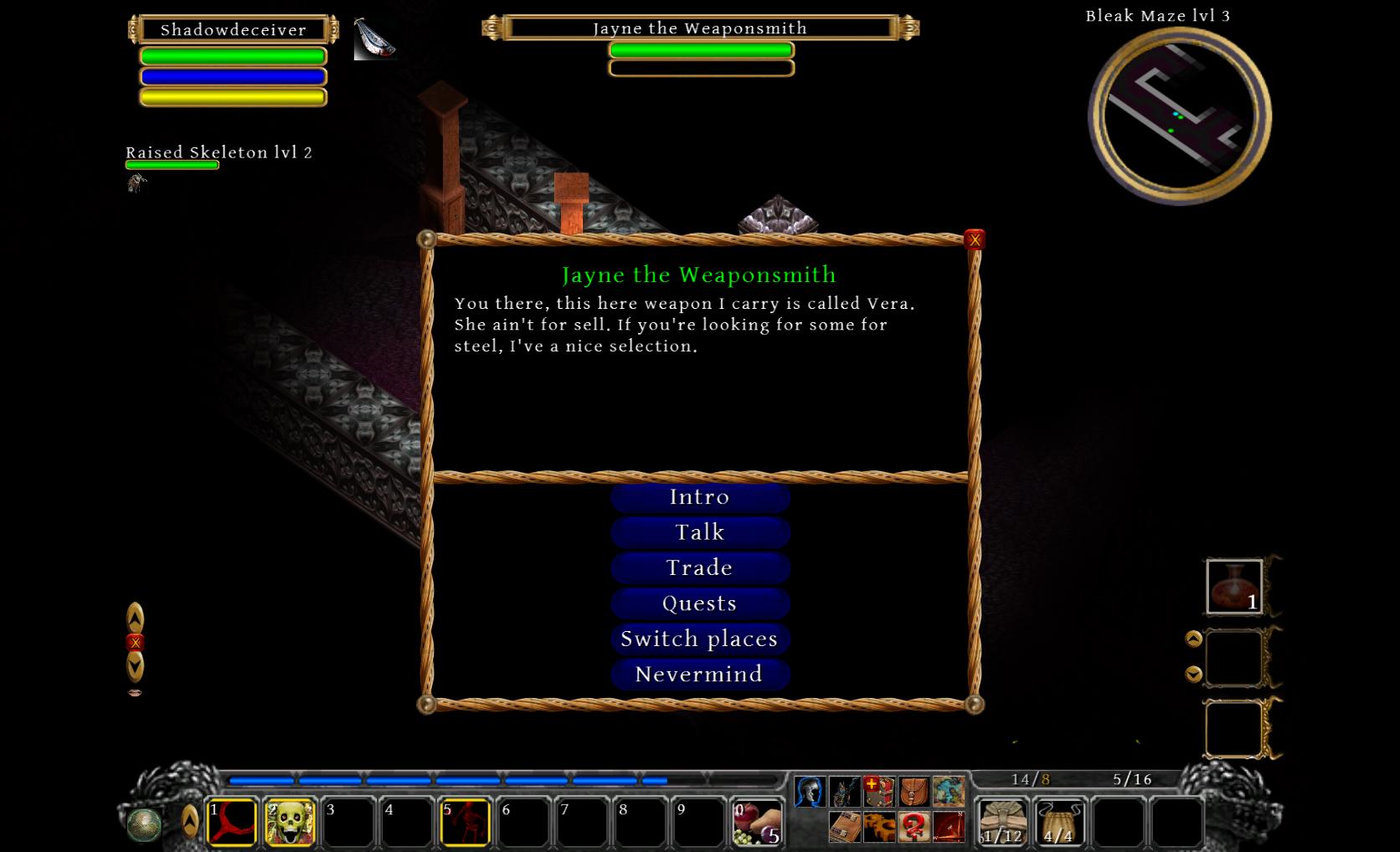 The Hero of Canton, the man they call Jayne.

Din’s Curse thrives in creating fluctuating worlds, right down to the quests and characters found within. I came across a few strikingly familiar merchants in the dungeon’s depths, such as Jayne from Firefly, claiming his sword “ain’t fer sell.” The developers know that players need a breath of humor after spending hours inside of a gloomy dungeon, and they succeed in evoking enough laughter to encourage your continued campaign to save the world. Akin to our hero, Din has cursed me with an inability to stop playing long enough to write this review. And it’s not because of the dynamic environs, but the class combinations. 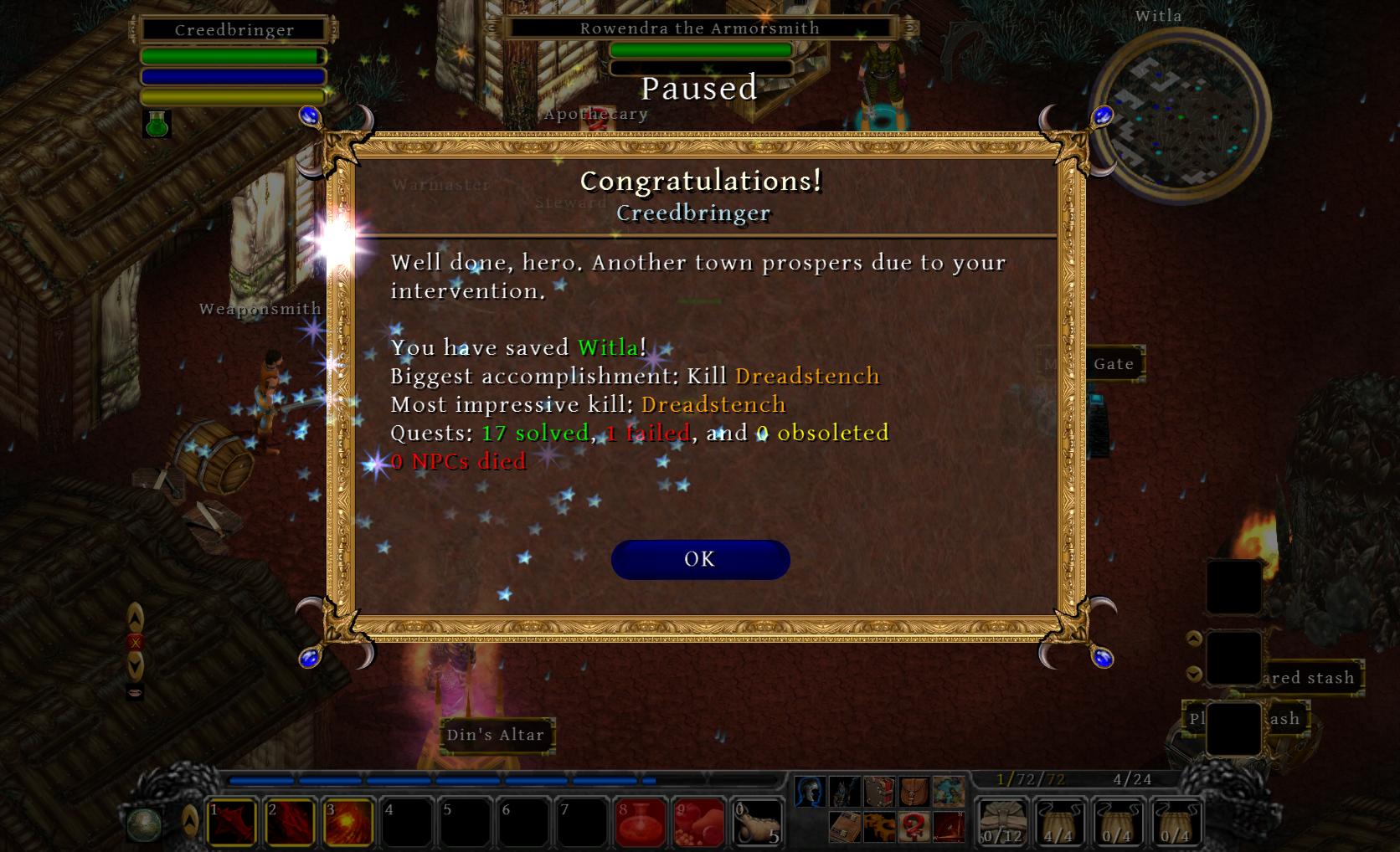 I killed Dreadstench. He wasn't hard to find.

I started as a necromancer, but found myself enticed by the class abilities of a paladin / healer. Switching halfway, I again stopped to try out a hybrid class. Each uses strategic abilities, some flashier than others in the way of graphics, and the metagamer in us all stops to analyze what would be the most overpowering combination. There are six recognizable classes, each with three specialties and a hybrid option. According to the website, that makes 141 combinations, not counting the mods.

It’s not all orcguts and demon ash though, and it never is. As much as we like to say graphics don’t matter, it’s not true. People do judge a book by its cover, and people will judge games by their graphics; I would wager that you already have. Din’s very noticeably falls short in the aesthetic department: the UI, spell effects, item icons, even the very sharp, polygonal character models could all use upgrades. The graphics remind me of EverQuest, they even make me want to play EQ. There’s simply nothing special about them in 2010, although it does open up the game to a world of people with low-spec machines and laptops. Music and sound effects are nothing new either, a variety of generic slashes and bludgeons simply get annoying after a few hours. I ended up muting the game and playing my own soundtrack in the background.