Remember those old cartoons where two people are playing chess and one looks away, only to turn back and see that the board has been rotated in his opponent’s favor? Vizati’s fundamental mechanics revolve around something which normally feels like cheating – tilting and rotating the field to your liking. 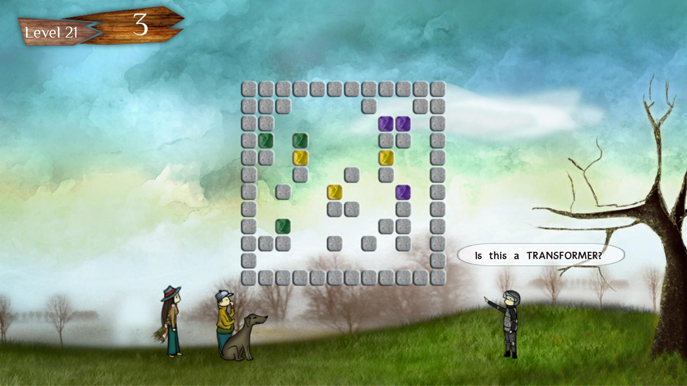 The objective? Fudge the board until three same-colored blocks are adjacent, but do so in a limited number of actions. Exceed the action limit and lose the level. Vizati is a simplistic-yet-challenging puzzle game, and is as elegant as it is perplexing. The game has an affinity for calming tones: from the modest artwork (which reminded us of Machinarium) to the resonating acoustic soundtrack, it is all very Zen. Probably for the best, because as a hardcore gamer, I more than once felt the urge to dispense headshots of justice upon the occasional head-scratcher. I must admit, upon solving the tutorial puzzle, I announced “First blood!” Game on, Vizati. Let’s see what you got. 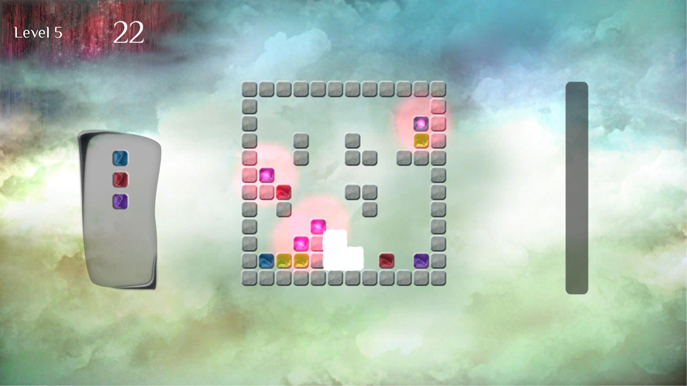 Starting out, I felt like I was almost too good. I could figure each situation out within a matter of seconds, and my ego reflected it… for about ten minutes. As I progressed rapidly through the stages, the game’s difficulty advanced at an equal pace; I simply started having trouble keeping up, and inevitably developed a habit of walking away for a few minutes, returning, and realizing exactly what to do – as if stricken by brilliance. That’s the problem: there are no difficulty options in the menu, no indicators or walk-throughs prevalent, and no ability to just skip that one level you are stuck on. It can be infuriating, but the naturally cool-colored backdrops and silly banter from passing civilians (who muse at the cube floating in the air) will keep your head level. 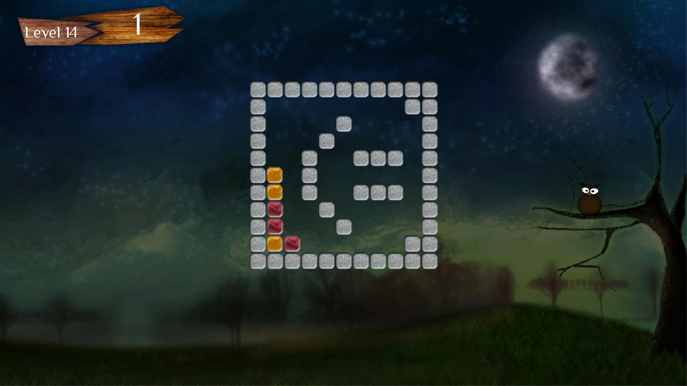 The game is mocking me.

Let’s talk gameplay. Colored cubes spawn within the confines of a mysterious floating box, and in story mode, you cannot proceed to the next level until all of the colors are matched in groups of three. The blocks could be at different elevations, separated by concrete walls, or just cornered somewhere. In the first case, a tilt might be enough to nudge the target block from its lofty post, which pushes all cubes on the board in one direction. A rotation (or turn) will physically spin the board about its axis, at which point gravity takes over and allows blocks to fall into their new, hopefully advantageous positions. After an easy fifteen levels the player is granted an arcade mode, which is probably where I had the most fun. Arcade mode lets you just play, your only opponent is the clock. This mode increases difficulty at a much steeper slope than story mode, and randomly instructs the player to match multiple sets of individual colors, while completely ignoring other colors.

The game held my focus for nearly a week before fading into the background of my hundreds of other games. Vizati is an affordable indie game and fantastic puzzler, but falls just short in the end. A disregard for diversity in puzzles increases the "I'm bored" factor swiftly. Puzzle fanatics and casual gamers should flock to Vizati; general indie fans might prefer the likes of Din’s Curse, Mount & Blade, or Trine. Vizati is worth getting solely for the intriguing artwork and wondrous tunes.