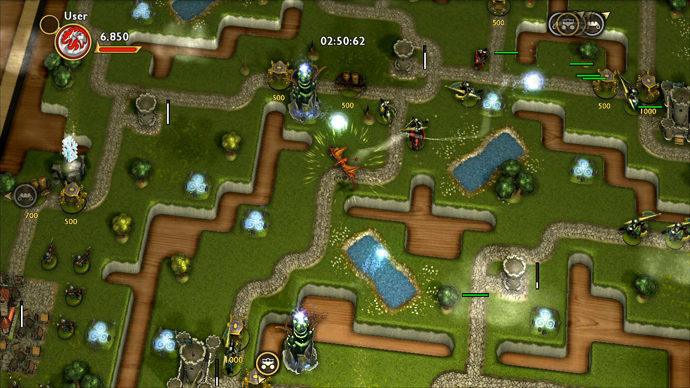 Rushing through small towns causing fear and panic as you utterly destroy everything in your path, compiling an incredibly massive mound of cold, hard gold, and stealing princesses straight from the castle. Life never gets any better than this! ..Or does it? Try doing all of this as a terrifying dragon in Hoard. I mean, it was great on foot - but as a dragon!? Like any other dragon, your one and only goal is to amass as much gold as possible within a time limit. From burning villages to destroying wizard's towers, you'll uncover gold piles and gem stones that you must take to your hoard. It's not easy though: you've got competition, and it's fierce. Other dragons will attempt to expand their own hoards and prevent you from doing the same. It's only business to attempt the same; entering the free for all are knights and archers, out to rescue the fair maiden from your clutches and defend their human settlements. Better yet, multiplayer makes it possible for even more dragons to compete for gold!

The usual gameplay of Hoard lasts ten minutes, during which time the dragon with the biggest pile of loot emerges the victor. There is no storyline to deal with - probably a good thing since they would feel cumbersome in such a simple title, so jumping right into the game is no problem at all. There are currently four modes available for play: Treasure Hoard, Princess Rush, Hoard, and Co-Op. Treasure Hoard sets the standard for this indie gem; you're given a limited amount of time to collect the most gold and perform your victory dance. Princess Rush is all about kidnapping (princess-napping?) and consequently, ransoming the most princesses. At the tail-end of game modes is hoard, a pure 'survival' type play with no limit other than your endurance. Overall it makes for interesting gameplay.

Hoard thrives on its multiplayer, offering a more competitive alternative to single-player. Swooping down and incinerating strolling merchant wagons provides your main source of income.  A pile of gold is dropped after burning anything - that could be towns, castles, or even wizard's towers, but each offers unique challenges. Dragons can attack and kill each other in their fight for supremacy, resulting in a respawn with penalties (losing your multiplier) or worse, leaving your hoard vulnerable to other players and creatures. The strategy embedded in multiplayer has some depth to it, and although being offensive, defensive, running interference, or remaining secluded might sound like simple choices, there's far more to it. For example, if you're feeling like the benevolent type of dragon, forcing towns to submit to your whims rewards your dragon with wagons of cash. Every gold piece you bring back to your hoard increases your experience, and with enough experience you'll level up. We talked about this in our PAX Prime preview. Leveling up enables the increase of either movement speed, fire breath, armor, or gold capacity (each lending to different graphical affects); developing a strategy around your different skills and abilities fast becomes a necessity in Hoard. Being a non-persistent world, every game will reset you back to level 1 to try again. Hoard is all about the short multiplayer skirmishes, so there isn't much else to the experience. 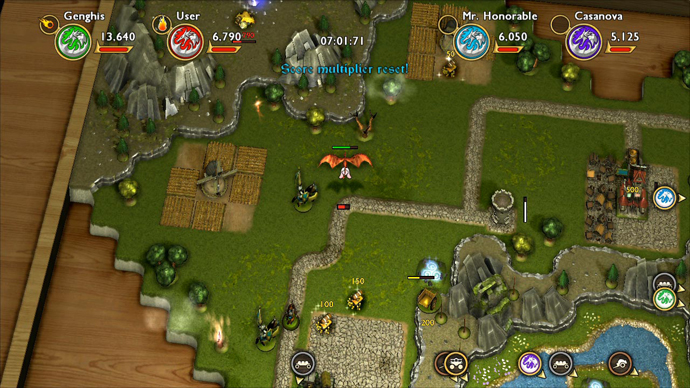 The visuals for Hoard are fluid and cute. It disguises itself as a board game brought to life, and really feels like one when the cube pieces fall from above and settle themselves into the board. There is no CGI presentation nor superfluous cut-scenes. It's all straight-up business with the dragons, however, the inflexible camera angle hinders the nice graphics. Additionally, I felt like the music didn't quite fit with the game's style; Hoard adopts the bouncy sound of a game that came from a GameBoy instead of a more medieval tone.

All-in-all Hoard doesn't offer much of an experience other than light-hearted fun. With no depth or progression, this game wasn't made for story telling - just pure action! The music gets annoying very quickly and just doesn't jive with the game in any sense. Without the richness of online competitive play, the game would just be a way to kill time. It can bring an easy chuckle, but it doesn't offer much else. At times the letters are hard to read as the text is rather small (UPDATE: The Hoard website promises a patch for this). Hoard is a friendly, silly title that has room for all types of gamers; it's a fantastic first step for Big Sandwich Games.