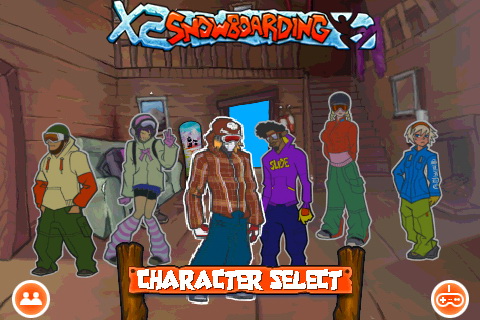 When I plugged my brand new PlayStation 1 into my TV one Christmas morning, the first game I fired up was Coolboarders 2. I love that game. It wasn't very good and there was really only one mode that was even mildly entertaining, but for some reason I kept playing it over and over again. Single player, multiplayer, no matter what I was doing I could always find a reason to put the game on and play just a little bit more. Ever since that time I've been looking for a snowboarding game that makes me feel the same way, there have been a few contenders, some have failed miserably and some have come close, but nothing made me feel the way I did back then. Maybe it's just nostalgia or maybe, just maybe, the developers of Coolboarders 2 managed to add something that still makes me feel happy to this day. When Gamers Nexus was contacted by Exient to review their latest game, X2 Snowboarding, I jumped at the chance. Not only was it an excuse to play more iPhone games and claim that I'm working, but from the screenshots that I saw it might have been the Coolboarders 2 game I was looking for; from the aesthetics to the modes, quite a few of the things I was looking for in a snowboarding game seemed to be there.

The first thing I noticed when I started up X2 Snowboarding was just how quickly I was able to jump into the game and start playing. I was very pleased with the fact that the only options I was given was how I wanted to play the game: do I want a thumbstick or tilt control? My experience with touch screen thumbsticks hasn't been the best in the past to I opted for the tilt control which, again, I haven’t had the best experience with before. In X2 Snowboarding the tilt control was fairly easy to use. I only had to tilt the phone a little in order to get my character to move the intended distance. This took a good bit of getting used to but once I had, I was able to race down the mountain with ease, often winning the race. 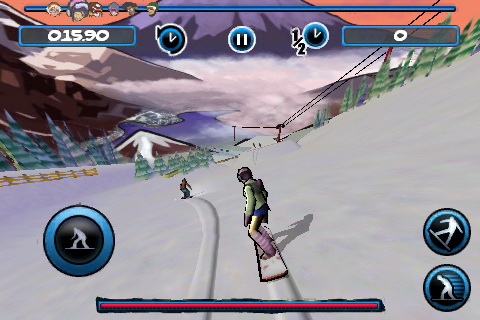 I was also pleasantly surprised with the graphical style that Exient had chosen, it was very reminiscent of the Coolboarders game I so obviously loved. The cell shaded characters accomplish a lot with very little processing power and help to give the game a more arcade-like feel, which feels appropriate for such games that are only played while waiting for the bus. It's very much the type of game that I'd put on, play a race, and then turn it off. There's nothing here to hold people for longer than ten minutes or so but I don't really think that's a bad thing when it's an iPhone game. To be honest, if you played an iPhone game for more than ten minutes you'd probably get back to the home screen to find an empty battery. That's not the game's fault, that's Apple's and nobody can really do anything about it.

X2 Snowboarding is a game that's really quite easy to recommend due to the amount of purchase options that are available. Want a cheap version with the option to buy more things if you feel like it? Guess what, there's a version for you. Then there's the version for the people who find that money isn't an issue, you'll be happy to know there's a 'full' edition here for you too. Point is, a number of different revs are available for everybody who could possibly want to play. The only thing I would say, however, is don't attempt to play the iPhone version of X2 Snowboarding on the iPad, especially with tilt control. My iPad nearly landed on the floor more than once. I suppose that's not how it's intended to be played, just a word of caution from someone who was almost buying a new iPad.