The bullwhip and fedora are back, and this time, in Lego form!

As a child of the mid 80's, nothing used to make me happier than to sit in the living room with a pile of Lego's, one of the Indiana Jones movies on in the background and just my imagination and Indy's wisecracks to keep me company. 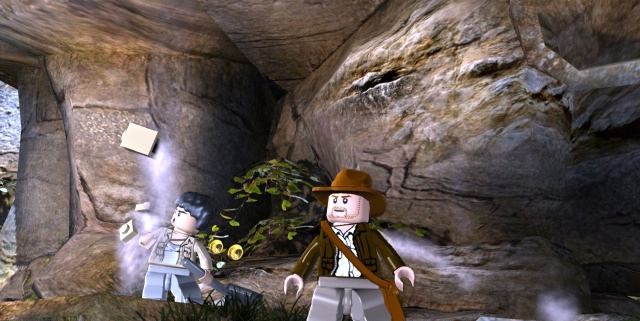 So imagine my excitement when Lucasarts and TT Games announced their second foray into the Lego Lucasarts universe. Well, when I say, 'imagine MY excitement' what I really mean is imagine a 10 year old boys excitement and then transplant that into my 21 year old body, because that was pretty much it.

Lego Indiana Jones: The Original Adventures (from here on out I'll refer to it as Lego Indy for ease, and less strain on my fingertips) for the DS plays pretty much the same as the Lego Star Wars games, but that doesn't mean that it's exactly the same just with an Indiana Jones facade over the top, oh no, this game is, in some way, better than Lego Star Wars, and that's saying something. Let's start with the graphics. Considering this was the DS version of the game I wasn't expecting massive amounts of polygons per model, but what I got was so much more than was expected. The Lego pieces themselves seem smooth and well modeled, utilizing the abilities of the DS with such perfection that there is no noticeable slowdown of the game engine at all, even when there are multiple objects and actions going on at the same time. In Lego Star Wars there were times when I noticed severe framerate issues, but the people at TT Games seem to have got this licked now and the game runs as smooth as silk all the way though. 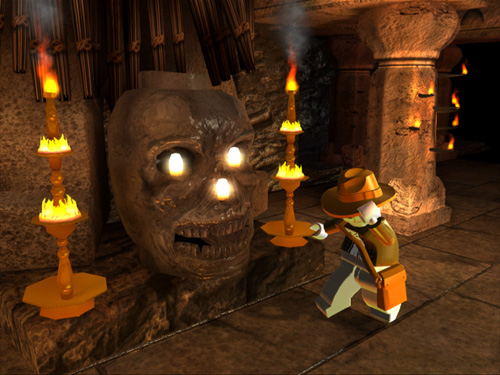 The format for Lego Indy is the same, tried and true, format that Lego Star Wars used, in that you play through each chapter of each story at least twice, once on Story Mode to see the story (duh) and the cut scenes and once on Free Play Mode to get all the rest of the hidden bonuses and achievements. This may sound tedious at first but I assure you there are plenty of reasons to go back and do levels over and over again, much more than just 2 times. The story keeps fairly true to the source material, some stuff from the films is left out, but to be honest I never expected them to be in. Things like the Nazi references, which are pivotal in the last film, are omitted from the game, but I don't think they're missed. The Lego games are intended for all ages and I understand when game developers want to leave things like that out. You get the idea quite quickly that the guys you are fighting against are bad guys; it makes no real difference to the gameplay, or the story really, whether or not they're Nazis.

One thing that I was happy to see in the DS version of Lego Indy is the multi-card multiplayer mode, I'm happy to see this for 2 reasons. Firstly, there's nothing better on this Earth than playing co-op games with a friend, couple that with the fact that this co-op game is Lego Indy and you have the recipe for unending, peaceful bliss. The second reason I was happy to see co-op mode is because every single one of the levels has you play with at least 2 characters, you play one and the other is AI, just following you. Sometimes the AI would get stuck somewhere in the level and not be able to move forward meaning you would have to go back and coerce them manually by either taking a longer way round, or pressing Y, switching to that character and moving them yourself. Worse yet, at some points in the game there are two person switches, which can only be opened by two people co-operating. If the AI fails here you might as well just quit while you're ahead and come back later, because there isn't any way you're advancing through the level now.

Short Term: Lego Indy has the same fun quirkiness that Lego Star Wars had, except more of it and more often making it extremely easy to just pick up for 30 minutes while you wait for the train. A bad point is that some levels take the whole 30 minutes to complete and you can't save midway, so if you can't get to the end before that train comes, expect to start the entire level again. Too bad. - 80

Long Term: The amount of unlockables and extras to unlock make the game amazing in the long term, personally I've played the game for almost 18 hours now and I'm only 91.1% complete, that's great value for money considering some top price console games only last about 6-8 hours. - 95

Multiplayer: The co-op mode is well implemented and makes the game infinitely enjoyable; I could play a level on co-op long after I've gotten bored of playing the game solo. I would like to see online co-op maybe at some point, but other than that the multiplayer in Lego Indy is more than adequate. - 90

Overall: Lego Indy has managed to take what was good about Lego Star Wars and add on to that prize winning formula, as well as ironing out some of the old creases along the way. Well worth the money and totally different from the console versions, making it worth it even if you have those. -