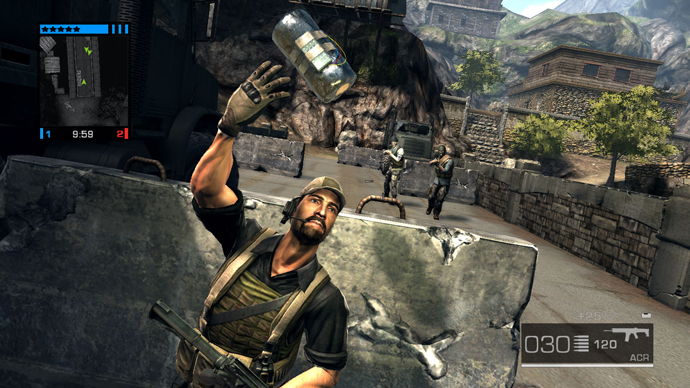 Most people have played a multiplayer FPS in their lives. It might have been one or two matches in Counter Strike years ago or it might have been Call of Duty: Black Ops at the end of last year. Either way, you're not going to be surprised when you load up Breach for the first time. All expectations are met: hierarchical leveling systems, multiples classes, team-based gameplay, and of course, a drool-inducing array of weapons. The past year seems to have been dedicated largely to destructible environs, and where Bad Company 2 may have fallen short, games like Medal of Honor attempted to fix the shortcomings. Breach has joined the fray with its own take on destructible environments and cover systems. This is where Breach attempts to separate itself from some of the larger competitors. A quick click of the right analog stick and you're able to stick to cover, just as you would in games like Gears of War. Breach's cover system is the type of thing you're not sure why you'd ever need until you're initially exposed to it, then you wonder how you managed to rack up all those kills in Black Ops without sticking to cover. The realism is amped up to impressive levels -- in a multiplayer match, you try to keep low as bullets fly mere inches above your head; RPGs are abundant, and gluing yourself to the side of a building can be the difference between life and death. Be wary, though, for buildings are also destructible. Had the RPG trooper fired at your cover instead of the ground, you could find yourself buried under a thousand pounds of rubble. 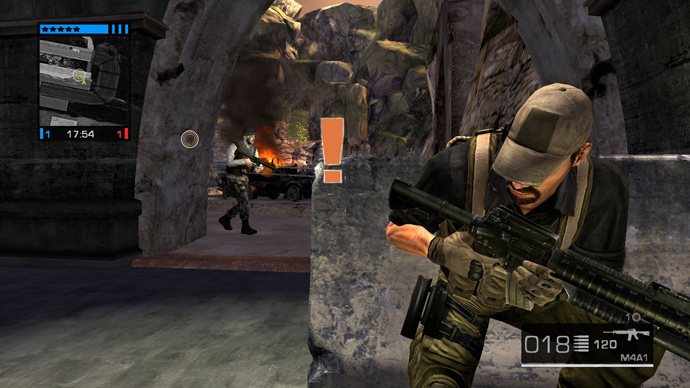 Breach's visuals were just as shocking as its addictive gameplay. I've still not gotten used to getting full AAA graphics from a downloadable game, and this certainly looked close to those. Breach is one of the best looking Xbox LIVE Arcade games I've seen, and there's some pretty impressive stuff up there now. There are mechanics in Breach that I wouldn't have let a full-priced retail game get away with, such as the fact that when you're in cover and you pull the left trigger to zoom into the scope of your weapon, for a fraction of a second you see two instances of your character; however, for an affordable Xbox Live Arcade game, I could let a few minor annoyances slip by without affecting me too much. Back to graphics, though! The destructible environments are visually stunning, there's no better feeling in a match than blowing the building out from underneath a sniper that's been taking you out constantly for the last ten minutes. No better feeling at all, and Breach allowed me to do just that. Complete and utter satisfaction.

Speaking from the position of somebody that is tough to please in the multiplayer FPS market, I couldn't recommend Breach enough. There's enough here for someone that's really only interested in the odd match here or there, but there's also a lot here for the type of player that would pick it up for hours at a time. Experience systems are a sure fire way to get people coming back for more (just look at RPGs), add on top of that the ability to gain higher ranks, unlocks perks and weapons, and you've got yourself a game that will almost certainly keep the hardcore fans coming back again and again. Unfortunately, the true test for a game such as Breach will come when we see whether people are still playing it in six months or whether they've all gone back to Black Ops or Counter Strike. For a game that's only option is to play it online, if there are no matches available to join then there's no game to play. Hopefully that won't be the case with Breach though, I want to be blowing the building out from underneath my foes for a long time to come yet.

Breach is available now from the Xbox Live Arcade Marketplace for 1200 Microsoft Points or via Steam for $19.99.