"A dash of your brother, a teaspoon of you, with the head of your sister, would make a good stew."

I've been kind of looking forward to Ninja Gaiden II ever since I heard how amazing Ninja Gaiden had been, especially about how satisfactory the game's difficulty level was. Having heard all these things about the original Ninja Gaiden, I was expecting the difficulty to stem from the idea of killing the enemies based on specific timing between your sword swings and blocks. It became apparent within the first 5 minutes that the difficulty in Ninja Gaiden came straight from the pure amount of people you had to kill before advancing the game to the next stage. Instead of giving you a more advanced and challenging enemy to face, it just gives you more and more of the same enemy, kind of like, "oh, so you can effectively kill 25 werewolves? Lets see you take on 35!" After a certain point, about a quarter of the way through the game, the limit of the amount of models the game can efficiently render is reached, making the rest of the game mind-numbingly repetitive after that.

Lell is the one on the right. I'm the ninja!

Ninja Gaiden II is one of the best looking games I've played for the Xbox 360 recently. The water effects in some of the city levels looks realistic and inviting (if they weren't tinted with gallons after gallons of demon blood anyway), and the character models are well defined and well animated, even if there are only a few animations to speak of. Ninja Gaiden II really hits its stride with the implementation of the games selling point: blood and gore. Maybe it's the latent serial killer that sits alone and bored within the twisted soul of every gamer (damn you, Jack Thompson!), but there's something amazingly surreal about chopping off arms and legs and watching the blood paint the walls. The only downside to this body deforming is that it seems unnaturally easy. I mean, I know that I'm playing as a Ninja and that they are supposed to have the sharpest of weapons, but I swear that sometimes all I did was brush past the enemies and an arm or a leg went flying off, after that, all I had to do was press the 'I Win!' button, 'Y' on the X-Box, and my foe was mercilessly slaughtered before my eyes with a short, predetermined, kill sequence. Very satisfying the first 10 or so times, very boring any time after that. In fact, and this might come back to haunt me, I think a brief quick-time event to make the player actually feel involved in these kill sequences would have been a bit better here. 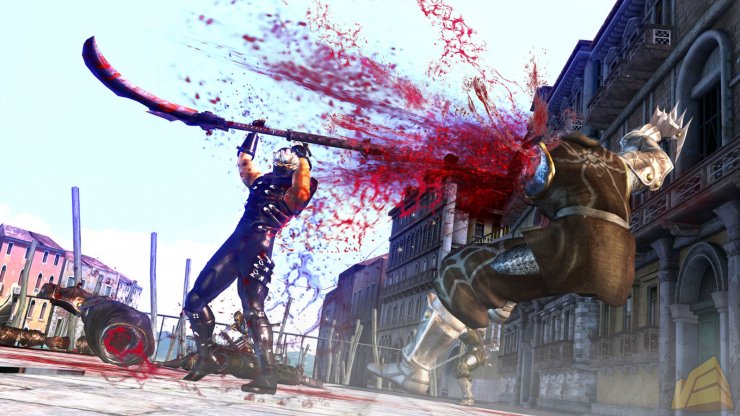 It's just a flesh wound!

There are really no bad points to Ninja Gaiden II, if you like hack n' slash games then this is about as good as you're going to get, but if you want a game with a decent story and a bit more depth, you should be looking elsewhere. I hadn't expected Ninja Gaiden II to have a good story, I just thought that maybe it would be a little more engaging. I found myself wishing I could skip the cut-scenes after the first few because I just didn't care anymore, and I wanted to get back to cutting people up! But that's what the game's good at and what it was made for, so I can't criticize it for that. The only other bad point I can think of is the camera, which is as bad as everyone said it was. Enemies are constantly popping up behind you, yet the camera is more interested in the finely textured castle wall. Not helpful and not enjoyable, but not entirely unprecedented from a third person hack n' slash game. So it's not that surprising.

Short Term: If you only picked up Ninja Gaiden II for 30 minutes at a time, you would probably find it really enjoyable. There are plenty of save points throughout each level, accompanied by an automatic save point before every boss, which you'll be using again and again. The developers assume that you have a basic knowledge of video games, since they just hand you a sword and say, "go on then," which I respect from a game. - 90

Long Term: Playing for longer than about an hour isn't very enjoyable in my opinion. The monotony of the levels will soon start to grind on a player's gears, making most gamers wish they'd turned it off at the last save point. - 80

Overall: I think Ninja Gaiden II did what it was made to do, and everyone that enjoyed the first game will probably love this one too; however, if you're someone who enjoys deep and well laid out storylines, this isn't the game for you. Get Ninja Gaiden II if you want to chop lots and lots of enemies into lots and lots of little tiny pieces and nothing more. - 85
Last modified on June 05, 2009 at 8:00 pm