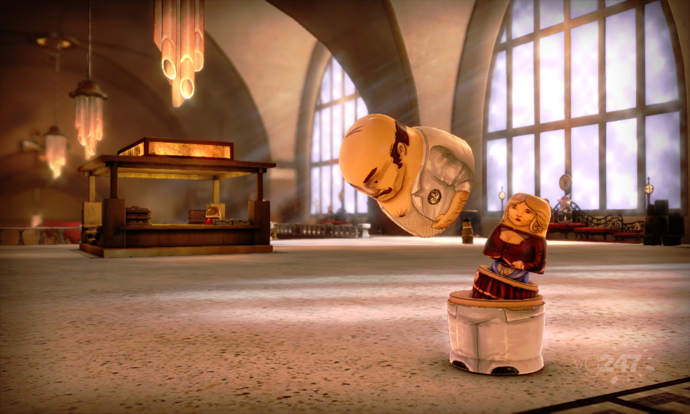 After my enjoyment of Double Fine's last game, Costume Quest, I knew I had to play Stacking. I knew that there would be moments of joy coupled with moments of heartfelt emotion, that's just the Double Fine way. What shocked me was that Stacking was free, on the day of release, for all PlayStation Plus subscribers, of which I am one, so I was able to play from day one without paying a single penny. That had me a little worried, was the game I was about to sit down and play for multiple hours so bad that they had no choice but to give it away? Had the guys at Double Fine lost their edge? Had they lost their humour? Thankfully, about 5 minutes into the game I realised that my worries were unfounded and that the people involved in bringing the game to the masses were just being generous. I can get behind generosity. 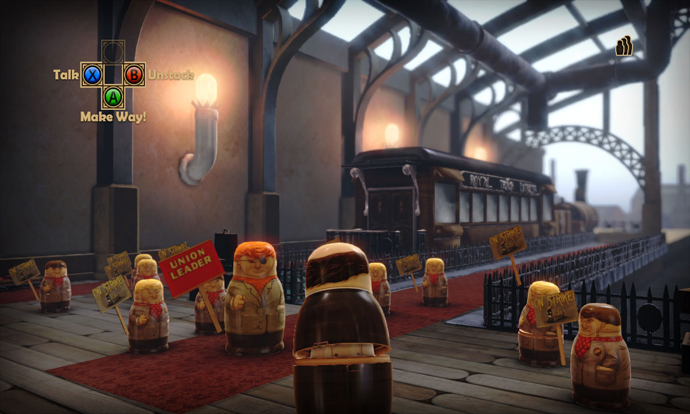 The story revolves around a working class Russian family, who are all under the rule of an evil Baron who uses various forms of child labour to get things done. One day the father of the family is kidnapped and Charlie, the smallest doll and the player character, sets out to find their father and ultimately overthrow the evil Baron. To do this, Charlie will need to use his ability of stacking himself inside other characters, sometimes to use their abilities for a specific purpose and at other times just to hide so he can sneak past the Baron's guards. The story is simplistic yet charming with all of the major plot being told in the first couple of minutes, with the rest of the game just being utilised to carry out the said plot, nothing else is really revealed and for a game that's supposed to be simplistic and easy to pick up that's not a bad thing. 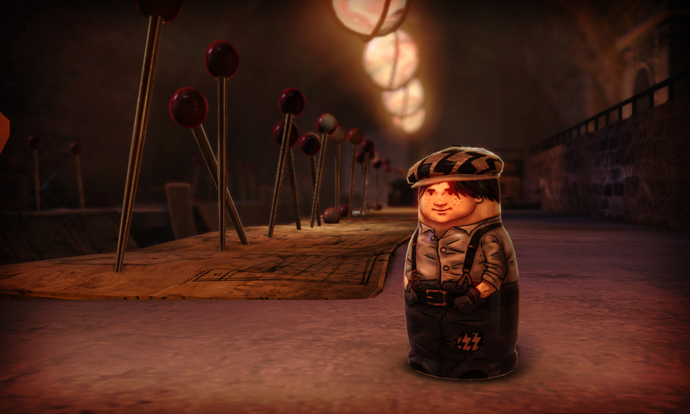 In order to complete the story and overthrow the evil Baron, Charlie must hop inside other dolls in order to use their abilities to solve puzzles. Most of the puzzles are simple, only requiring a single type of doll in order to complete. Towards the end of the game things start to get a little bit more complex, sometimes requiring two dolls to work together or a doll that's a little bit more out of reach. The majority of the game is simple enough with a lot of the solutions being fairly obvious. Nobody should have trouble with completing this game, getting to 100%, however, its might take a little bit more thought. 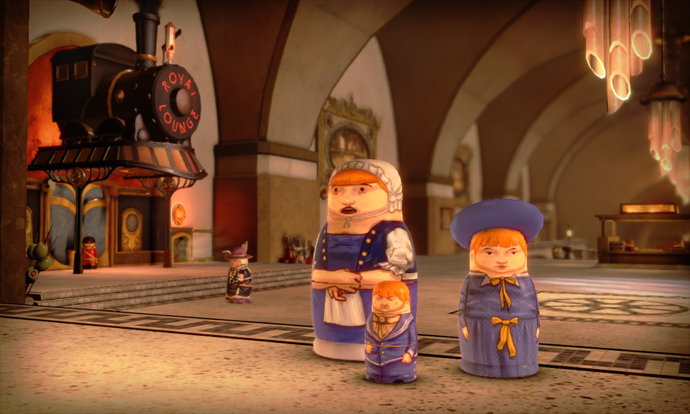 After the cartoon style of Costume Quest and the over-the-top style of Brütal Legend, it was nice to see Double Fine lean more towards the more realistic. The objects of realism are Russian Nesting Dolls so that allows Double Fine a little bit of leniency, allowing them to show off a little bit of their cartoon flair that they've become known for over the years but mostly everything in the game is rendered in a somewhat true-to-life fashion. The graphics themselves are sharp and easy to look at with good effects on the dolls, making them look varnished, as they should. A lot of care and attention has been shown to Stacking and that's always good to see, especially when it's, for the most part, an indie title. The audio in Stacking was something that I was pleasantly surprised with, while there's still no voice acting, it's not missed here and the music makes up for it by helping to give the game a silent movie feel the developers were so obviously looking for. The only thing that would have made it better was seeing a silhouette of somebody playing the piano that the player hears in the bottom corner of the screen. The sound effects used in the game, for all of the unique dolls as well as in other locations, are all of high quality and all help to enhance the atmosphere that Stacking is aiming for.

Costume Quest was a little disappointing in terms of its longevity, once you've finished the main storyline there's really nothing to do except start again. With Stacking, Double Fine seems to have learned that lesson and added a lot more stuff for the player to do once the game has been completed. These are in the form of collection tasks, collecting all the different unique dolls and discovering all the different ways in which a puzzle can be completed, but the fact that they're there at all makes the replay value of Stacking much more than what was experienced with Costume Quest. There's no way I cannot recommend Stacking to anybody that enjoys thoughtful gameplay. Some of the puzzles' solutions aren't obvious on first glance but if you apply a little bit of thought to the problem then the answer is easy enough to see. Usually. If you enjoy puzzle games, enjoy adventure games or just enjoy well made, entertaining and humorous games then Stacking is right up your street. Even better considering that if you're a PlayStation Plus member you can get the full game for free, at least for this month (February 2011). Go get it. Go get it right now.