Ah, Grand Theft Auto 4, the epitome of modern age gaming, or so people would have you believe.

I am not one of those people. The game is good, very good, and Rockstar knows it all too well, this is evident when you look through the stats and notice an 'Addiction Rating'. All I'm saying is that this game is like any other game, it has good points and it has bad points, and maybe it's the fact that all the good points are so utterly magnificent that it makes the bad points stand out like a nun at an AA meeting. 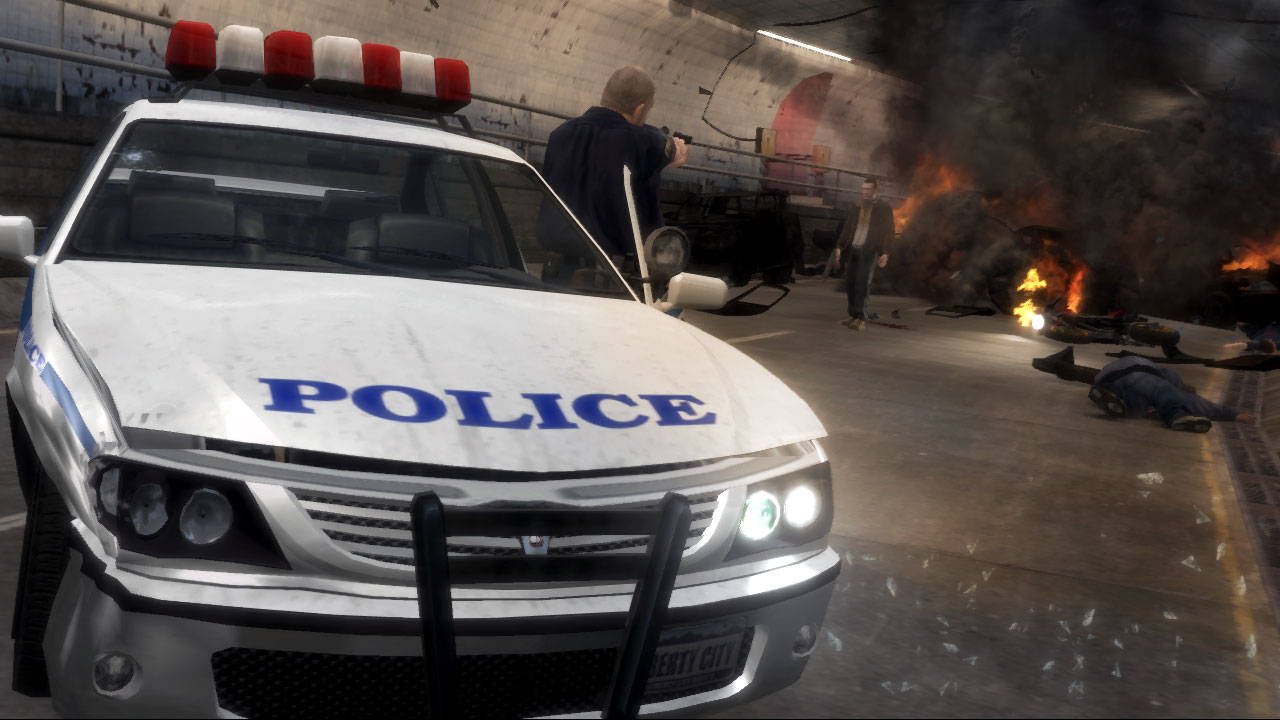 Did I do that?

Let me start by saying that although this game is good as a whole, if you took both of the main aspects of this game, driving and shooting, and analysed them separately they would paint a very different picture. The driving, firstly, is impossible at times. I usually play through 'non-sim' style racers by handbrake turning into every corner to get the most speed in and out. I've done this method since the first Grand Theft Auto and Driver games. It's never steered me wrong (pun intended), until now. If you even attempt a handbrake turn at any decent speed, you'll cause the car to spin out, meaning that you'll have lost more headway than if you'd just slowed down and turned using the normal brake. Once I'd decided that the handbrake was a no-go area in the game, I tried the 'driving sim' approach, drive to the corner, brake and turn in, then accelerate out. This also didn't work because when you slowed the car down to a speed at which most corners are manageable, the car becomes as manoeuvrable as a Sherman tank in a snowstorm. Basically what I'm saying about the driving is that on the straights it's amazing, the sights of Liberty City becoming a blur as you speed down the highway, the wind in your hair and the distant sounds of police sirens caressing your ears like a sweet melody, is one of the greatest feelings I have had in gaming in a long while. But if you need to turn a corner, slam on the breaks, turn the wheel, close your eyes and pray that you see the other side. 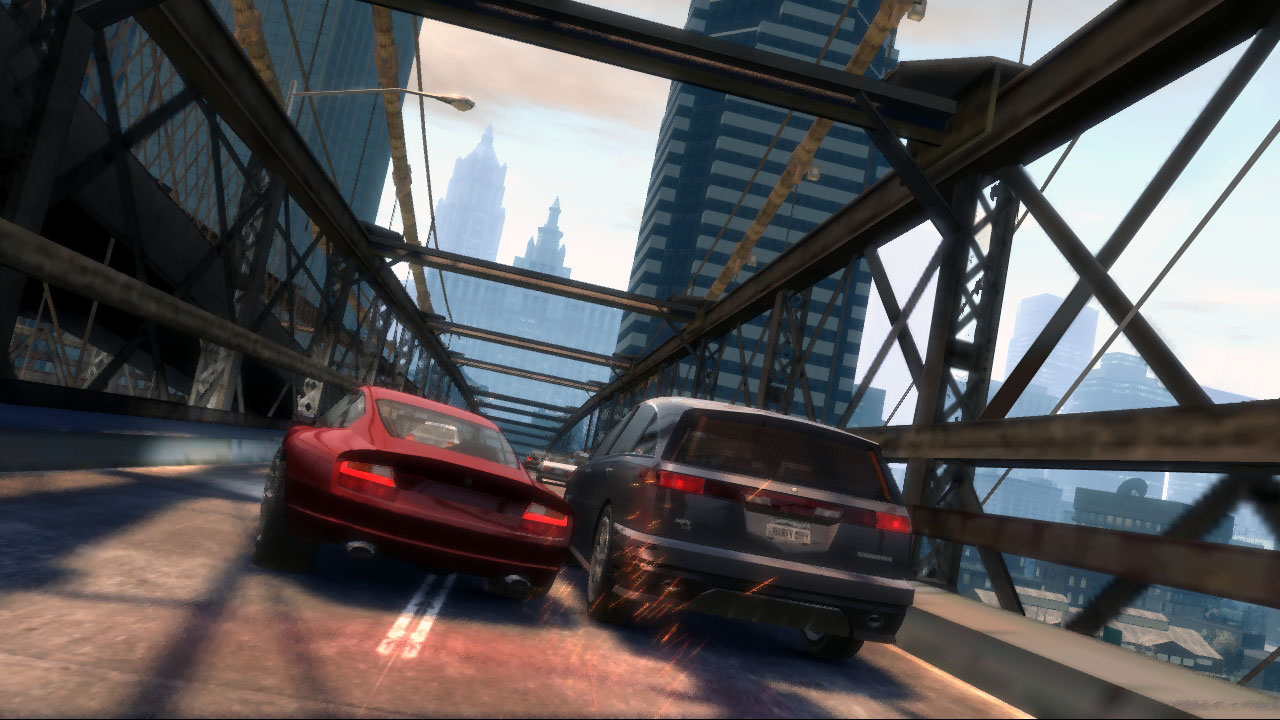 The shooting is equally as poor. The only way to manually aim in GTA4 is to half press the left trigger, which, in the heat of battle, is a very hard thing to concentrate on doing. Too much pressure on the left trigger and you auto target the closest enemy (most often the guy you don't even want to shoot), too little pressure and you do nothing and end up with the taste of hot metal in the back of your throat. The cover mechanic is something that feels like it was an after thought, like the developer sat down after a hard day's work to play some Gears of War and thought, 'Crap! I knew there was something missing!' It's a cheap attempt at a cover system, which, most of the time, actually makes it harder to shoot the enemy. It's a lot easier to just get the machine gun out, keep pressing auto target and just hold down the shoot trigger, granted you'll be spending a lot of money and time at the ammo shop but you'll have a lot more fun in the actual fire fights.


For all the bad points of these two systems, however, there is one saving grace. Grand Theft Auto 4 isn't a driving, or a shooting game, it's both, and these systems, when presented together in a single gift wrapped bundle is one of the greatest gaming experiences of the last few years. Not because the game is the best thing ever, it's not, it's because it feels massive, it feels epic, and that's rare in games recently. Grand Theft Auto is the 240-minute epic fantasy film in a world of 90-minute teen comedies. And it shows.

The developers really spent a lot of time making GTA4 look good, the motion capture is convincing and lip sync is some of the best of seen in games recently, some movies don't even look as good as this game does; however, you could have the best lip-syncing in the world and it would mean nothing if you haven't got good voice talent. Luckily Rockstar had this base covered as well, and the voice talent in GTA4 is passionate, even genuinely funny, making the cut scenes and any other place there is a conversation as appealing and entertaining as the actual game itself. 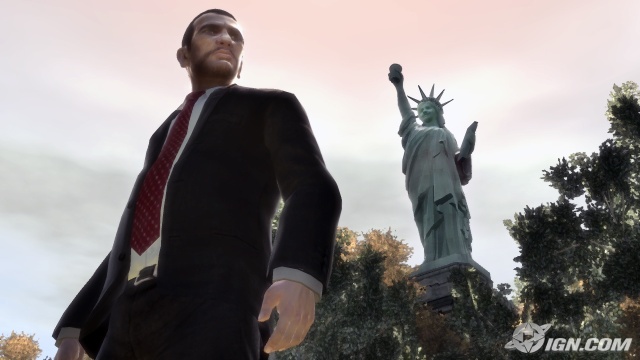 Short Term: The nature of the GTA games makes it easy to just pick up and play for 10 minutes if that's all you have available. Just jump in a car and go for a drive, there's plenty of city to choose from. - 95

Long Term: There are plenty of missions and a lot of side quests to keep most gamers amused for a good 20 hours. And then after all that's done there are all the little secrets that Rockstar likes to put in all of their games. - 95

Multiplayer: The multiplayer option in GTA4 is a good attempt and the problems with it aren't really Rockstar's fault. The main problem is the amount of idiots on Xbox Live that have no idea how to play. Do yourself a favour and only play with people on your friends list. - 85

Overall: Grand Theft Auto really is a very good game, but it's probably better to rent at first, the driving and shooting problems might bother some people, but if you're one of the people that it doesn't bother, then you'll have one of the best gaming experiences in the last 5 years. Go! Have fun and kill people (my God Jack Thompson would have loved that last statement). - 92%