Back to Alien Breed 3: Descent: does it live up to the hype generated by the previous games? Does it add anything to the storyline, or is Team 17 just trying to milk the cash cow they seem to have made for themselves? Sit back, dear reader, and let me tell you all about Conrad, Klein, the Leopold, and the right royal mess they've gotten themselves into. 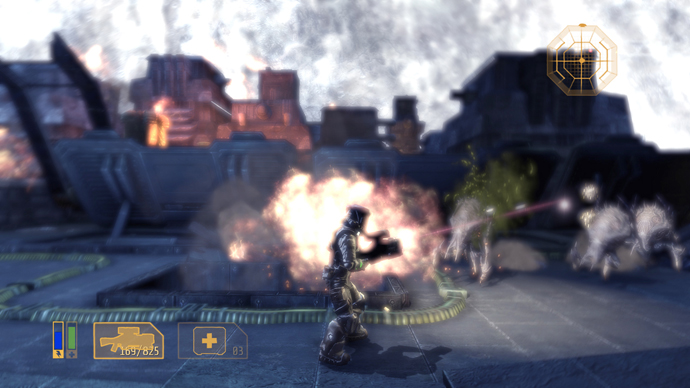 You start the game, as you have done in the two previous games, having gotten yourself further into the alien ship. This time, however, you're determined to stop the threat you're facing – even if that means blowing yourself up in the process. The storyline leaves a lot to be desired; it feels a lot like a cheesy 80's movie -- big tough guy goes in, blows the crap out of everything that even dares to blink and then walks out -- usually with massive explosion and a crappy (yet memorable) one-liner. For the most part the story is good, if a little dorky, but the main disappointment is the cheap way the game uses to make the player backtrack all the time. If you're given the goal of walking to the end of the corridor and flipping a switch, you can be sure that half way down the corridor there's going to be a bunch of enemies, then the room will set on fire, then perhaps flip upside down and enter a parallel dimension. OK, those last two might not happen but they're not far from the realm of possibility. The rinse-and-repeat process of "objective -> aliens in corridor -> objective -> return to original location" gets boring quickly and makes me hate the game a little more every time it happens. 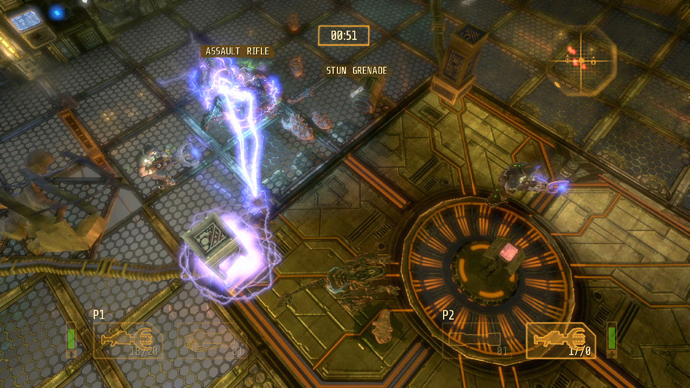 The gameplay is rooted in the same simplistic-yet-archaic control scheme that the other games were: use the left analog stick to move Conrad and the right analog stick to point at whatever you want to die. You'll be given various tasks to do – most of which revolve around shutting off gas pipes, putting out fires, and whatever other environmental hazards happen the befall our gruff-voiced hero. Once these tasks are completed you'll be pointed in the direction of the next area in a very linear fashion where all the same things will happen over and over again. There's not much originality here, and not much has changed in the gameplay since the first game almost two years ago, but it's just more of the same. The gameplay on a whole feels repetitive and rightly turns a lot of players off, but if you're only playing for short periods of time then you should be able to get through the game pretty easily and without the repetitive nature really kicking in. 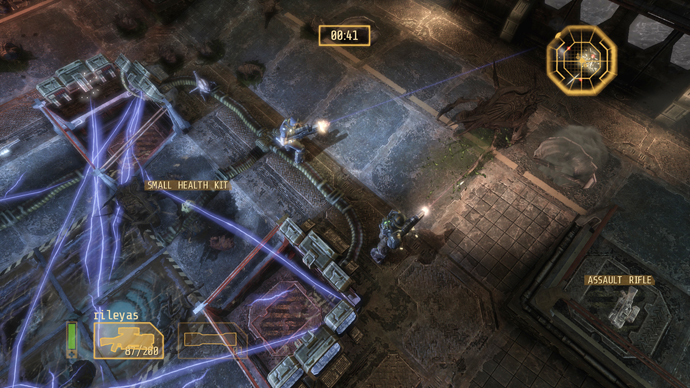 In terms of the looks of Alien Breed 3: Descent, there's been no change since the second episode, so returning players will know what to expect. The graphics aren't bad, but if any of the models are given any sort of close viewing then some pretty major flaws become obvious. Models have a low amount of polygons -- not a problem if the textures were high quality -- but sadly, they're not. Most of the time the models move at a fast enough speed that that player won't notice the downfalls; however, there are moments when the camera zooms in close enough, and the enemies move slow enough, that the player won't be able to do anything other than bleed through the eyes at the clipping (ruining immersion, you know, 'cause you have to stop your eyes from bleeding).

If you've played the previous games in the Alien Breed series then there's no reason for you not to get this one too. It wraps up the story quite well and despite not advancing much at all in terms of the technology, it doesn't get any worse. The story is adequate and the set pieces are fun, although they are repeated a little too often. Worth a purchase for the price tag, but if you've never played any of the Alien Breed games you would do better to hold off until the boxed retail version comes out. That one will certainly be better value for money and a more cohesive story without the episodic breaks.