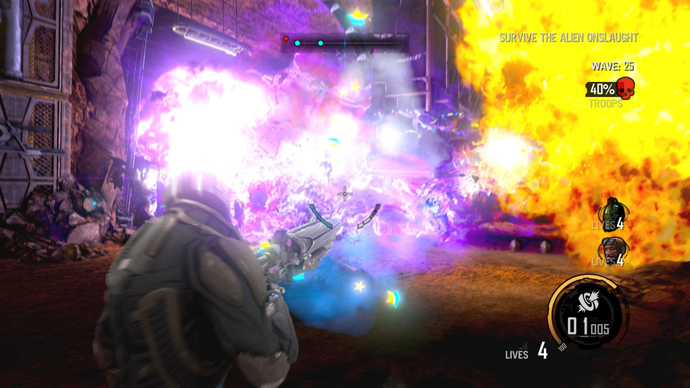 The most controversial question in every Miss USA pageant isn't that of whether or not science should be taught in schools, rather, it is whether or not the genocide of an entire alien species (from Mars, no less) would make a good game.

Volition and THQ say yes, yes it would.

In fact, the duo is so stalwart in their core belief system of Ultor-destruction, an evil corporation that seems to float through many of their games (like Saints Row), that they have now made available an armory of purposefully overpowered weaponry. For instance, a handcannon-sized gun that fires super-magnets -- a negative and, presumably, a positive -- to attract massive structures to collide with one another. Or, if you play the way I do, to play Duck Hunt with creepy, crawly aliens. And singularity guns. That's right -- just shoot your specimen with miniaturized black hole, take a step back, and watch the magic happen! Here's a hint: for bonus points, whip out your shotgun and open fire on the bad guys as they fly into the depths of an unplumbed hole. Of black.

Of course, once the target is thoroughly crushed, killed, maimed, and destroyed, you will almost certainly hear the renowned "arf, arf!" from the good ol' NES days. 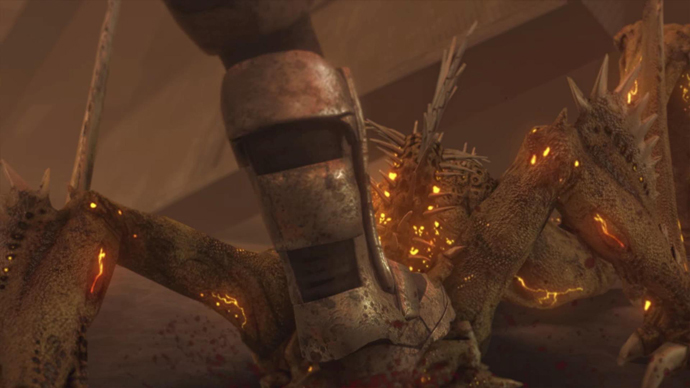 The story plants our character in the middle of a tri-faction war. It's a common tactic in movies and games to use multiple factions in order to share action between them, thus keeping the game relatively fresh. We're on Mars as part of a futuristic mining and colonization operation, and inadvertently stumble into an alien nest, unleashing thousands of them into the world. It falls on the shoulders of what's left of the military (you and some other guy that never manages to kill anything) to save the planet. Between the "cultists" that worship these subterranean monstrosities and the monstrosities themselves (and in one mission, a camp of off-screen, disgruntled colonists), we've got our work cut-out for us -- the only problem? It's been cut with a cookie-cutter. You've played this game before, maybe even several versions of it, but the question remains: is it fun to play, despite the obvious recycled material?

The TL;DR version is, quite simply: yes. It is fun, but who you are could change that answer, and how much you want to get out of a game might impact its inherent worth. 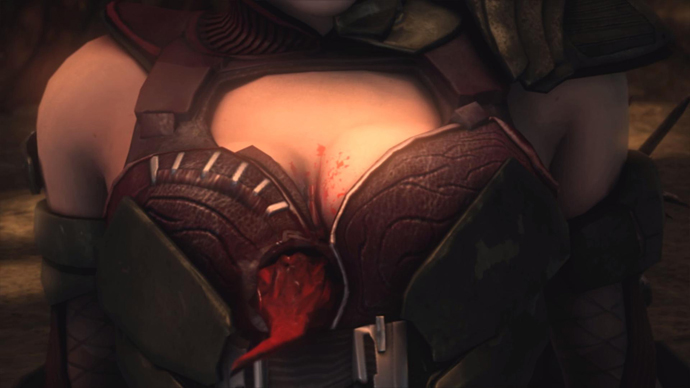 In and of itself, Red Faction: Armageddon is no more than an explosive-happy, overly destructible, somewhat replayable game. If you've ever played Mercenaries, Just Cause, or Prototype, you know what I'm talking about; the entire objective is to, essentially, manipulate the environment to effectively obliterate your targets. It is not until you unlock overpowering "nano forge" improvements that the game becomes an effortless slayfest (in essence, the nano forge is responsible for powerups and AoE attacks -- much like those found in Crysis 2).

I played the campaign for about three hours, switched to multiplayer for a break, and then switched back to the campaign. What I hadn't realized beforehand was that, due to my successful attempt at surviving thirty waves of aliens in a four-player co-op mission, I had unlocked every single tech tree in the game. To my estimates, it would have taken the entire campaign to unlock all of them (if even then), and alas, I had every power only half-way through. Among other upgrades, this granted me unlimited ammo (when in a 'berserker mode,' which I was every thirty seconds), massive forcewaves to repel enemies, and huge shields that protected me from nearly everything. While I commend the devs for allowing upgrades and persistent characters cross-mode, the immediate flaw with this idea is the fact that multiplayer is far easier to succeed in, which means instant upgrades for your campaign. 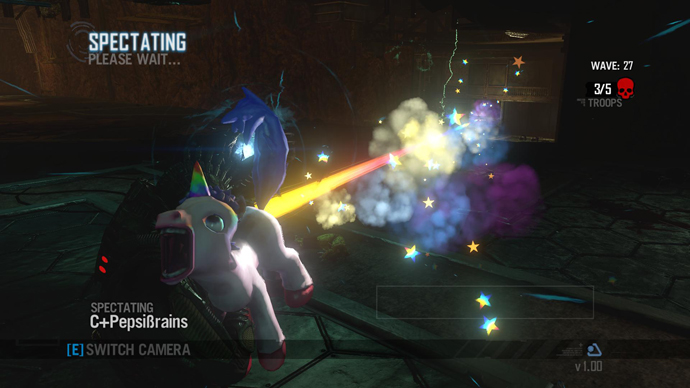 Red Faction: Armageddon focuses its energy on destructible environs. The story wasn't anything incredibly impressive -- in fact, I found it extremely predictable -- but in the end, it served its singular purpose: act as a vessel to enable the player to slaughter hundreds of aliens. That's honestly all the game is about: killing things. In essence, it is the hi-fi version of Alien Breed. The levels are extraordinarily repetitive and half of them are non-essential to the plotline. You'll find yourself groaning through the "vehicle levels," where you are restricted to a vehicle and not allowed to use your own devices; crying through the "onslaught levels," where you merely 'defend X location' until all the mooks are dead; and finally, wincing at the "something hasn't happened in 10 seconds, time to have a superfluous amount of enemies charge you for no apparent reason" moments. Don't get me wrong - they can be fun, but not for an extended period of time. That's probably why the campaign is only about six hours in length, maybe less, and you've probably got a good two-to-four hours of multiplayer gameplay, but not much more than that.

There's a handful of slightly unique weapons, but for the most part, you've seen them all before (except for, perhaps, Mr. Toots); the game is carried on the back of the explosive weaponry, and would be entirely bland without the singularity gun, rocket launcher, and magnet gun. You'll love the sheer force and overt overpoweredness (totally a word) of these items, which is undoubtedly intentional, but aliens get boring after a while. Play it for the guns, stay for Mr. Toots.

That's what I always say.