The DS is pushed to its absolute limit with this beautifully textured, platform-styled adventure game. Featuring hundreds of obsticle combinations and a handful of semi-difficult button-mashing combat situations, the game lives up to the expectations that its older brother, simply known as Assassin's Creed, has set.

Ubisoft seems to have stepped into its baby shoes from way back in the 90's to give adventure games another go. With the success of the Rayman series backing them, they knew what they were getting into.

While the game still includes the same cities by name, they lack the original open-city flow. Don't get me wrong, the almost unheard of 3D graphics, on this handheld, more than makeup for it. Rarely do you have the option to run diagonally, move on x,y, and z, and this game not only hosts said x,y,z, but furthers it by truly giving the player options that are only available with x,y,z. Unfortunately, everything good comes with its share of ugly, and when testing the game, I found myself growing frustrated with a few obstacles that required a non-provided eagle-eye cam angle, because of the sub-par depth-perception. 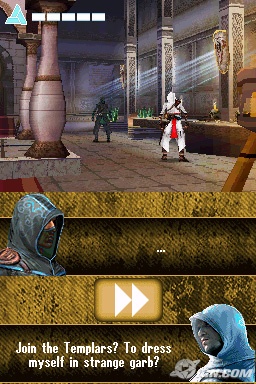 The gameplay is fairly smooth, all the buttons make sense for their functions, and I have to admit - I love the smooth transition between sprites, especially when jumping. If you have played the computer version of the game, you will by no means find yourself dissatisfied with the prequel to our hero, Altair. Similar to Rayman's collectibles, in AC:AC you must collect blue orbs to upgrade your weapon and health, also collect red orbs to heal up your injuries. You would also be pleased to learn that a grappling hook has been introduced to the game, creating even more ways to escape! Though I felt that in the PC-version I had to 'make fun for myself' half of the time, I did not feel this with the DS. Tons of traps and tricks that can be bypassed using multiple methods increase the replayability on this one. The combat is not as repetitive either, not as much anyway. It may still be considered too easy with the counter-attacks, however, this is countered with enemies that do not allow themselves to be countered...whew! This time around Altair can also use crates to kill enemies, typically by dropping them off of balconies. Some bugs will permit you to walk up to an enemy, push the box in his face, and crush him, from level ground. Try to forget these bugs and the game will be a lot more difficult. 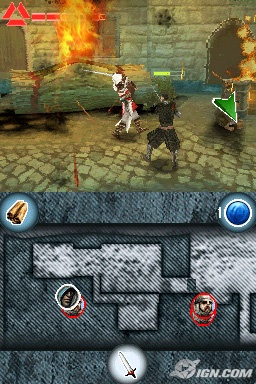 Nintendo's unique dual-screen technology is also used efficiently for once. The bottom screen is a mini-map/mini-game host, and the top is where you will find Altair. Yes, I said mini-games. When playing the game you still have to eavesdrop, pickpocket, and whatnot, except Ubisoft has turned the events into a mini-game instead of a recurring nuisance. You now guide a pickpocketed item deftly through the target's coin-purse. To those who have not played the console/PC Version, this game replaces the act of following your target around, hand forward, as if you are reaching for his behind - a rather odd act for an assassin. These games are played using the stylus. For martial arts fans, there is another game that pokes some fun at pressure points. Use that stylus, hit the pressure point just right, perfect timing, and your foe will collapse before you even have to lift a sword or raise the alarm. The scratch on this game's ceremonial sword would definitely be its few bugs, and depth perception.

Overall: Similar to Rayman. Great game for car-rides. Great game for when you are a gamer at the beach. Not bad to play in avoidance of work. Bugs and depth flaws could potentially get the better of you, sewers are more like rivers, and assassinations are much less intense. Bugs run freely in this game, almost as if taking after their real-life counterparts.