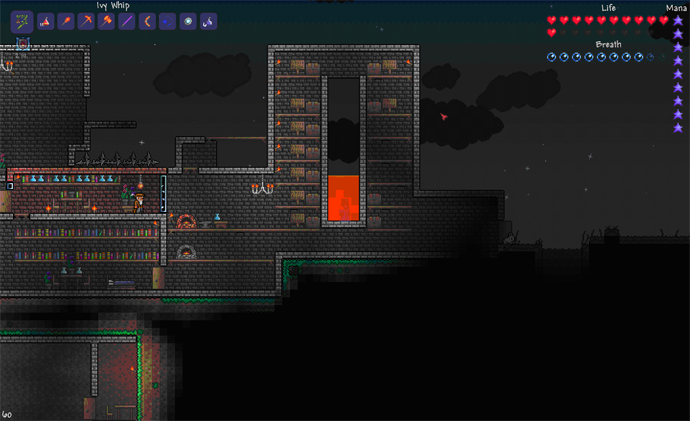 Although easily dismissed as a 2D Minecraft copy - does Terraria’s focus on fast-paced combat and outrageous weaponry give it an edge of its own? Developed by Re-Logic and selling more than 432,000 copies, many people would say so; read below to find out why we think so as well.

The game drops you into a randomly generated world, where you will rapidly unveil the incredibly dangerous and unforgiving environs that surround you; with the knowledge, of course, it is important to begin exploring and collecting resources to build a shelter for the cold nights. Monsters will spawn and you will be fairly defenseless for the first couple of nights. The game substitutes an NPC guide in the place of a proper tutorial, so most of the time you will be left to learn on your own -- but once you do, you'll be able to build castles and craft your own weapons arsenal, rivaling the one in Dungeons of Dredmor. 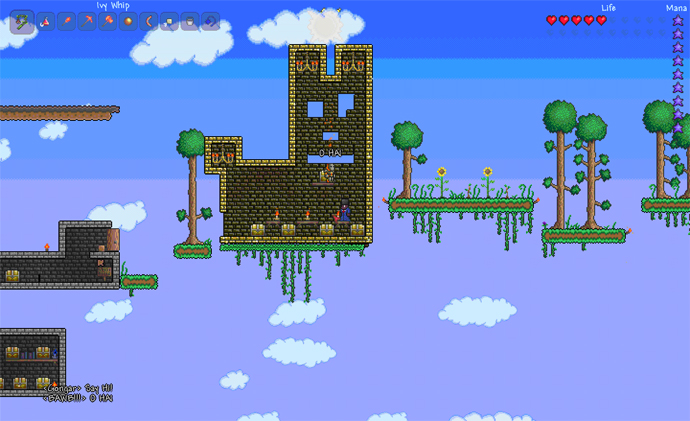 The addicting gameplay will give you hours of slaughtering mobs (to include slimes, bats, Dune-like worms, zombies, and Zerg-esque creatures) with your armory of eclectic weapons, namely: swords, boomerangs, magic, flails the size of Spike from Mario 64, and more. When joined by friends, the difficulty is amped up as hordes of monsters spawn, making it more painful but more challenging. Creating items is as easy as pressing “esc” near a workbench, furnace, or an anvil and selecting the item you want, then expending the materials needed to get you the product. This is, for casual gaming's sake, an improvement over the "discovery system" that is used by Minecraft (although at first intriguing, it later becomes a burden to draw shapes in 9 boxes). The primary purpose of this easier crafting system is, likely, to illustrate that creating items is not the main point of the game, rather an addition to it. 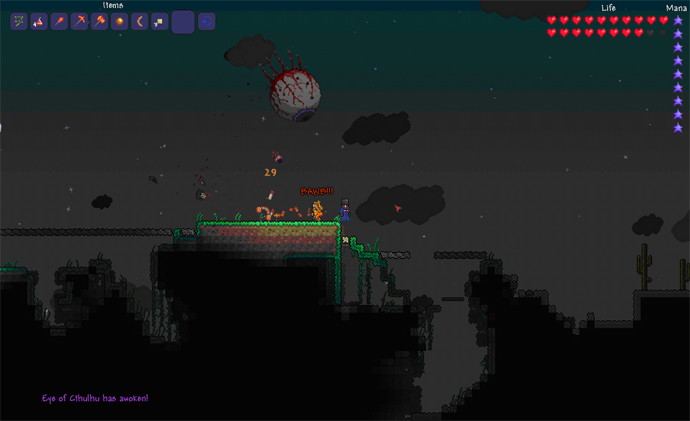 Multiplayer works flawlessly with their server system, although griefing can become a problem on public servers; luckily, there is blacklisting and whitelisting available for dedicated servers to prevent interlopers.

Although more heavily dependent on adventuring and fast-paced combat, Terraria doesn’t dismiss the creative side. You are able to create massive structures (to be fair, this is easier in Minecraft) -- granted, being a 2D side-scroller, these structures are much smaller -- Terraria uses background walls to make up for the decrease in overall area, giving you an option to fill in your structure with different types of backgrounds. Walls are also the primary defense mechanism against spawning monsters (a civilized location with walls will prohibit spawning). Once you've created a few houses or rooms, NPCs will venture into your territory and occupy them, lending more meaning to your constructions; unlike Minecraft, surfacing to merchants and nurses in Terraria helps aid the exploratory process and ensure an increase in longevity per world. 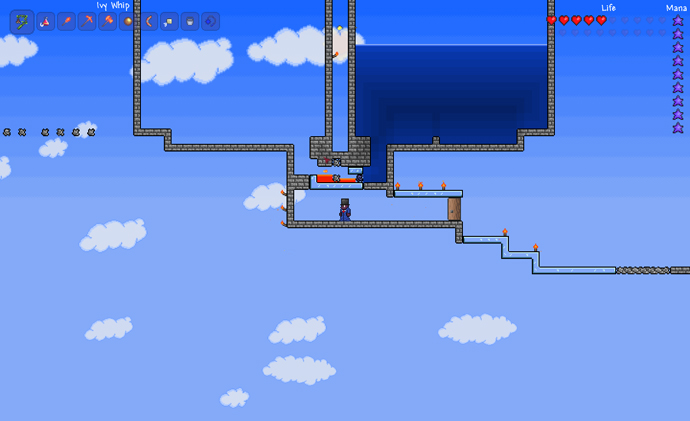 The game does have its downfalls, of course: the near-total lack of replayability in single-player (as killing the same boss over and over again can become quite dull) limits the potential for entertainment, and the world's finite status means content will end at some point -- and grinding billions of Imps, zombies and Eaters of Souls can take its toll in immersion. Believe me. All of this said, the Re-Logic team is doing an amazing job at giving free updates (we call those 'patches,' to all you DLC whores out there) that bring bug fixes and great new content.

Terraria will bring thousands of internets to you and you will enjoy them with friends (or without them, /foreveralone). The fast-paced combat and adventure, the building, and the monster-hunting will spur you to return on many occasions. I’ve spent 107 hours playing this game, yet I can’t imagine any of it being more awesome. With updates ever-pending, there is much more to expect for the future of Terraria.