Sounds amazing doesn't it? I thought so too, and when I put the game into the Xbox 360 the first thing I thought was that the game really does look polished, the cars are well rendered and the surrounding city is interesting and well defined. The second thing I thought is that the city's resident DJ, DJ Automica, is the most annoying person on the face of this virtual world and that if the sole thing I could do in this game is drive up to the recording studio and smash full pelt through the window and into his annoying, idiotic, boy-racer face, I would be a VERY happy man. Unfortunately you can't, so you've just got to sit there listening to him for the entire game, too bad because some of the music is actually pretty good (Airbourne FTW), and if you want to listen to the music you have to listen to him, oh well. 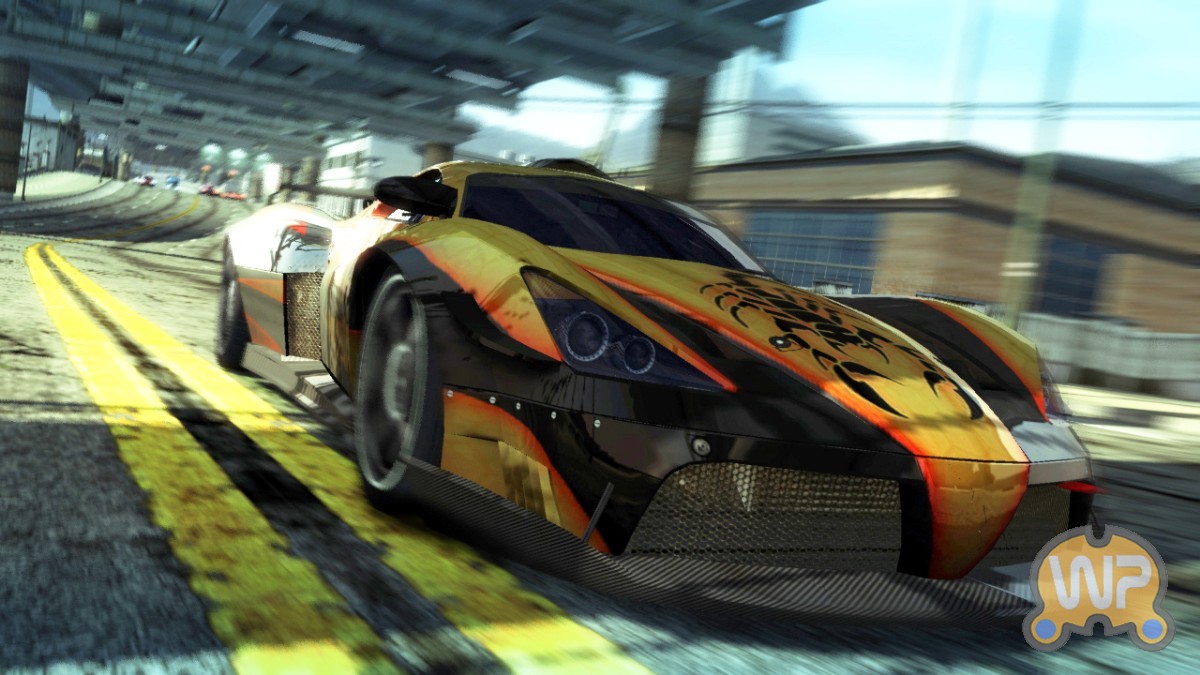 This Scorpion hasn't got a stinger, but it does have NOS.

The main concept of the game is that you perform tasks, which consist of racing against other people, smashing a set amount of other people, racing to a set point while surviving other people, and performing stunts to try and achieve a set number of points, every time you win one of these events you get closer to upgrading your 'Paradise City License'. At first this seems ok: You can certainly do what the developers intended for you to do, you can choose which race you compete in, even when you want to do it, but they haven't really done anything to overcome the tedious nature of just repeating the same type of events over and over again. Once I got to my 'B' License (which takes about 30 wins, and about 3 hours), I was utterly fed up with the races and found myself just driving around Paradise City looking for billboards and fences to smash through, just to avoid actually playing the game. This obviously is not a good thing.

The more and more I play Burnout: Paradise, the more I think that the point of this game being released was a tech demo. The people at Criterion figured out that they could make a car crumple and twist based on where you hit the wall/tree/car, and while this is an important development in the history of game realism it feels too forced on the player at times. When you crash, the game switches to a slow motion camera and you are forced to watch the results of your bad driving for upwards of 10 seconds, this looks good the first couple of times but after a short while, when you crash you just want to get back into the race, not watch all other players pass you so expertly and in slow motion.

But as with a lot of games on the current market, there's one thing that saves this game. Multiplayer. Jump online and you will be taken from a Paradise City that seems perfectly fine but also dull at the same time, to a Paradise City that contains other bloodthirsty, crazy, and malevolent people from all over the world. The game itself then changes from a racing game, to a third-person shooter using cars instead of guns. I found myself creating grudges against certain people and going miles out of my way to get that one specific person, great fun!

Overall: Good for short term play, good to play with friends, good technology just not very well implemented at this time, perhaps the next Burnout will be a little less tedious and boring after a few hours.