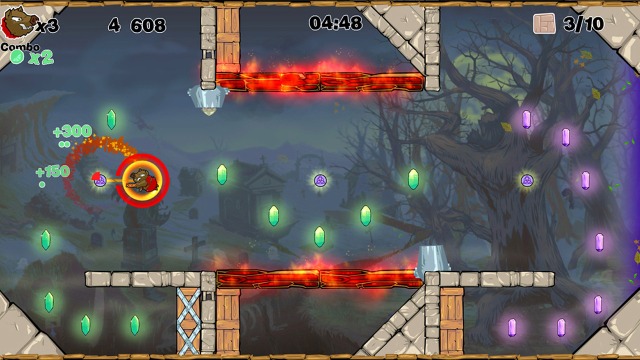 How many times have you wondered how much more fun something would be if a hell of a lot more spinning was involved? Well, like most people, the answer is probably not that many times, but that doesn't mean that Dancing Dots doesn't want you to think about that kind of stuff: cue Rotastic, a charming, colourful, and slightly mad puzzle game where the main objective is to grab onto little pegs with your rope, spin around in circles and attempt to collect as many gems and other objects as you can along the way. The more gems you manage to collect, the higher your score is going to be, the higher score you manage to get, the bigger and better helmet you'll attain when the level finishes. We all know what it means if you've got the biggest helmet...

There's about as much of a story as you would expect from a game where your sole purpose is to spin around on little pegs all of the time (that is to say, ‘none’). All of the characters that you'll play as are given little back-stories in an attempt to make you care a little bit more about them, but ultimately there's nothing to tie you down to a specific character, you never feel an affinity to one or the other, you'll just be picking (and staying with) them because they looked cool when you first loaded the game up. 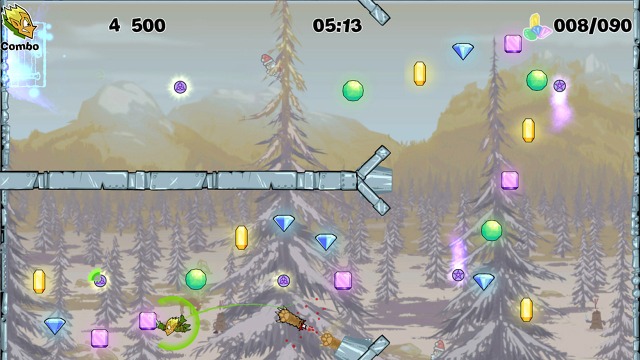 That being said, not having a story in a game that's first and foremost a puzzle game isn't a bad thing at all. Stories in puzzle games tend to clog up the reason that you're there in the first place, to play a puzzle game; Rotastic doesn't succumb to those petty problems. With Rotastic you're getting an addictive -- albeit in short bursts -- little puzzle game with characters that are there to look awesome and act even better. They're not there to save a princess or battle some great evil, you won't find them climbing to the tops of the highest mountain or plundering the deepest depths, they're swinging in circles because...well, damn it, spinning in circles is fun!

The gameplay is one of those easy to learn but difficult to master types. It's simple enough to figure out how to connect yourself to that piece of the environment that's coming toward you at full speed, it’s even relatively simple to work out how to use that mechanic to collect the odd gem here and there, perhaps jump on a few heads or cut a few ropes in the process. It is, however, another thing entirely to be able to perform such acrobatic feats without dying, or while collecting them all fast enough, and with enough finesse, to get the platinum helmet upon the level'scompletion. 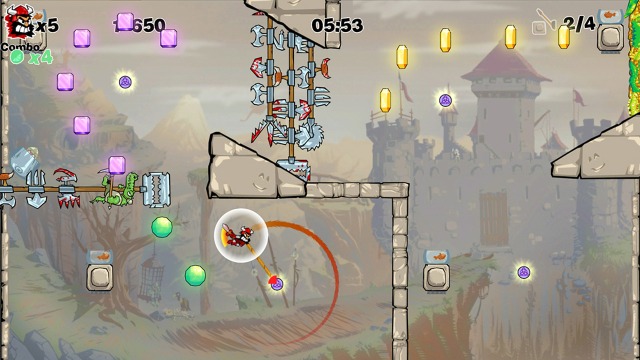 The other aspect of the gameplay comes in the form of multiplayer. Pick a couple of players, get them to pick a couple of characters to represent them on the battlefield and sit back and take part (or just watch) the ensuing acrobatic carnage as the players swing around the screen attempting to swing through their opponents rope which will result in it being cut, sending them speeding towards the floor. If they lose all their lives then it's game over; and time for another match.

Rotastic relies on a heavily cartooned style to win the player's heart, and for the most part it works, there are a few characters to choose from, all of which have overly exaggerated features with certain aspects that tell the player a little bit about their background. Each of the levels that you'll be playing in have the same cartoon style to them, keeping with the whole theme of the game, instead of taking something away from the game though the style that the developers chose perfectly compliments what the game is trying to convey; that everything that happens within the confines of the game world is absolutely, 100%, crazy. You're never going to see real people swinging around in circles in the sky collecting gems and cutting each other's ropes so why bother making a game that involves all that overly realistic? You may as well make it in a cartoon style and at least have it all fun to watch. That's what Rotastic is and it fits perfectly.

The only real downside to the way that the graphics are handled is the fact that the animations can be a little stiff. Whenever the rope is deployed, for example, it's always tight, there's never anything about it that makes it look like a real rope. It's as if there's only one sprite for that particular object within the game and they're going to use it over and over again, and that gets a little boring quite soon into the game.

If all you're looking for is a game that will help you waste a few hours on a lazy day then Rotastic is a decent enough game for that. If you're looking for a game with a game style that you've probably never played before, either on your own or in a multiplayer battle with a friend, then Rotastic is good for that too; anything more than that and you should probably look elsewhere. The style of the game is visually pleasing but the animations of the sprites is a huge let down, making all of the game look a little too stiff for most people's liking. It's definitely worth a play, the puzzle mechanics alone are unique enough to keep a good amount of people interested. Whether it's a game that people will be playing for the long term though, that's something we'd have to wait to find out