It's been a very long time since I could say this, but there is FINALLY another good Sonic game out. SEGA has been pushing 3D crap with Sonic out for years, instead of staying true to the roots of the series and keeping him in a 2D platform setting that makes sense to the playstyle.

Sonic CD brings back the original game in all of its 2D glory, and I must say the few visual enhancements that were made really helped to set the game apart. Your best moments will feature a “future” sign post flipped instead of “past” (much like the old flags that you had to hit to get the secret stages), reverting the visuals from the old style to an updated, futuristic look. Everything looks shiny and new -- even Sonic gets a bit gussied up for the occasion.

All the other kids / with the pumped up kicks / better run, better run.

The story is quite familiar: Dr. Eggman, that dastardly devil, has taken the time stones from Little Planet and Metal Sonic kidnaps Amy Rose, a love-struck female hedgehog. You play through each stage, attempting to collect as many coins as you can and quickly reach the end, where you can either (a) jump into the secret stage if you completed its requirements (time, coins, sign posts, etc.), (b) run through, or (c) fight Dr. Eggman. There is only one stage that truly involves Metal Sonic, in which you must race him to a pipeline that closes after the first person reaches it, soon followed by Dr. Eggman zapping the loser. This, by far, is the hardest level in the game.

Tails even makes an appearance as an unlockable character after your first play-through. 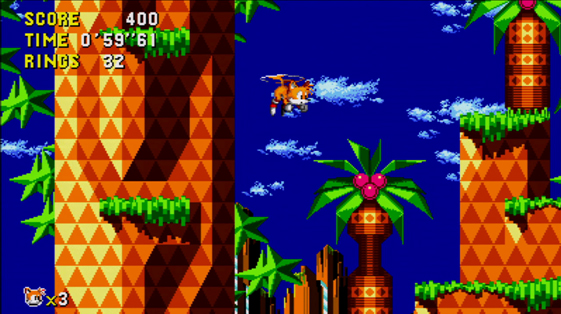 Tails does, in fact, whip his tail back and forth.

Sonic CD had me excited for most of the game aside from a few, weird turns in Dr. Eggman's personality. We all remember the cute and cuddly little creatures from, you guessed it, Little Planet; rest assured that they are ok, they have NOT, in fact, been kidnapped this time. No, Dr. Eggman has done something far more devious and sinister: He's become an avid gardener. I know! You are shocked, but trust me when I say that Sonic will not allow for such green-thumbery, and thus seeks to destroy the greenhouses Dr. Eggman has so carefully constructed to watch the beautiful flowers grow. How dare he take an interest in botany and Time Stones at the same time!

My second (and less important) quarrel is that they kept the secret stages as a flat plane in which you must run around a square platform and jump into random floating metal bubbles. This would be acceptable if the hit-boxes were accurate, but it tends to be extremely difficult to accurately line up your jump with the bubbles. 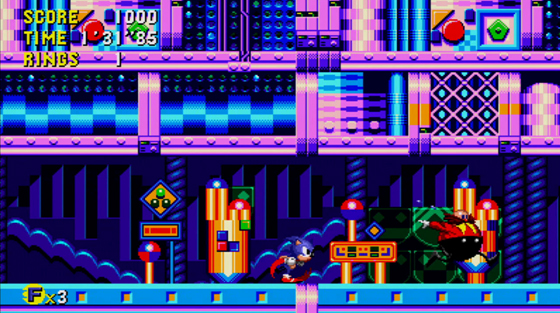 I always wondered how Dr. Eggman could outrun Sonic. Guess he's been doing the Insanity Workout.

The overall mechanics are quite sound in the game and it is fairly easy to pick up, so if you have kids or are of the "Challenger" gamer personality, I would highly recommend tuning them into what can be considered some of the best 2D platforming games around and returns Sonic to the roots we all know and love. If you're bored, luckily, the time attack mode provides a bit more challenge to the mix. SEGA, for the first time in a long while, you have done something right. Keep it up!