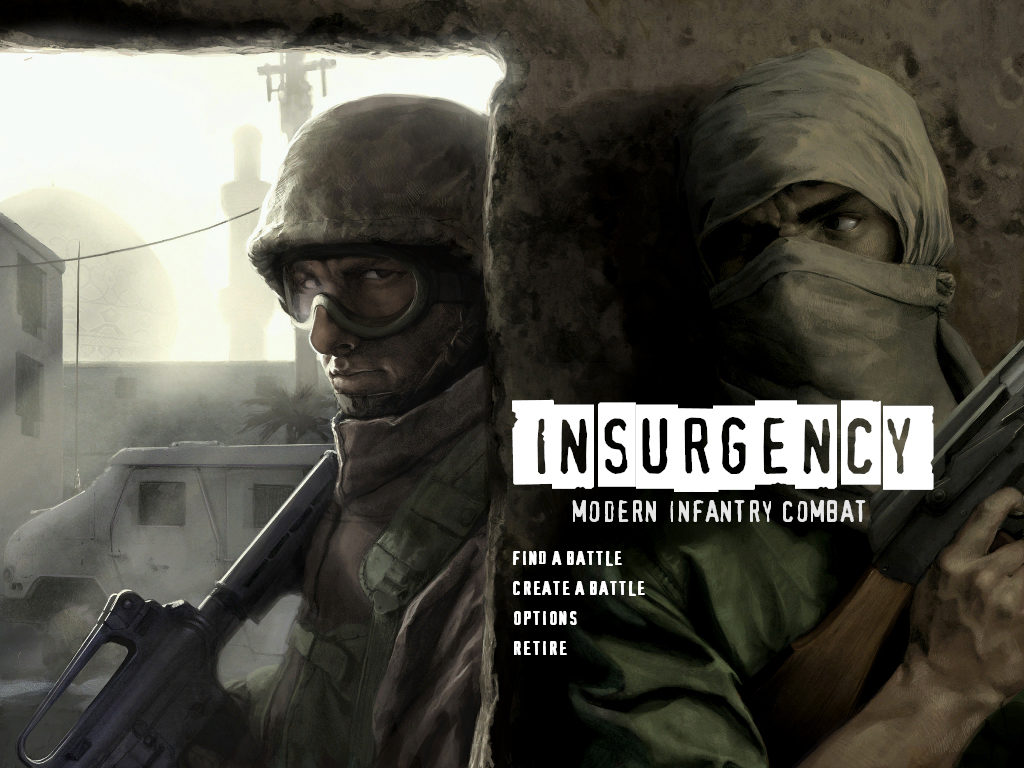 Created by a member of the Canadian Army, Insurgency drops you into war.

You look around, realize your entire team is charging one direction and join them. You've learned shift is sprint, have reached a battle, and you get shot. Not the perfect ending, but everyone dies in the beginning. Welcome to Insurgency: the beautifully realistic recreation of the War in Iraq and Afghanistan. Getting used to the game can take time; I suggest setting aside at least an hour for your first experience to learn the basics.

Alright, so what you're looking at here is a game that focuses primarily on teamwork.  You'll need it to get anywhere. This is mainly where Insurgency stands apart from other FPS's. Each team, Insurgents and Marines, is divided into two squads with a commander; this commander can set objectives which will display in the top right of everyone's screens allowing a quick reminder as to what you should be doing even if no one is communicating. You need to stay low, talk, and keep moving in order to be successful. Capturing points will be your objective on most maps, in order to do this you must have a certain percentage of your team in the location for a set amount of time ( for example if it's only 5 on 5 it will require one person but in a 15 on 15 it could require two or three), the more people the faster the point is captured. If an enemy player is in the point it will become "blocked" which means you cannot capture it until you eradicate the affliction. Your reflexes are your main weapon, as long as you can see the enemy and line up your ironsights in time, you'll win the fight, so check your corners and have someone gaurd your rear. 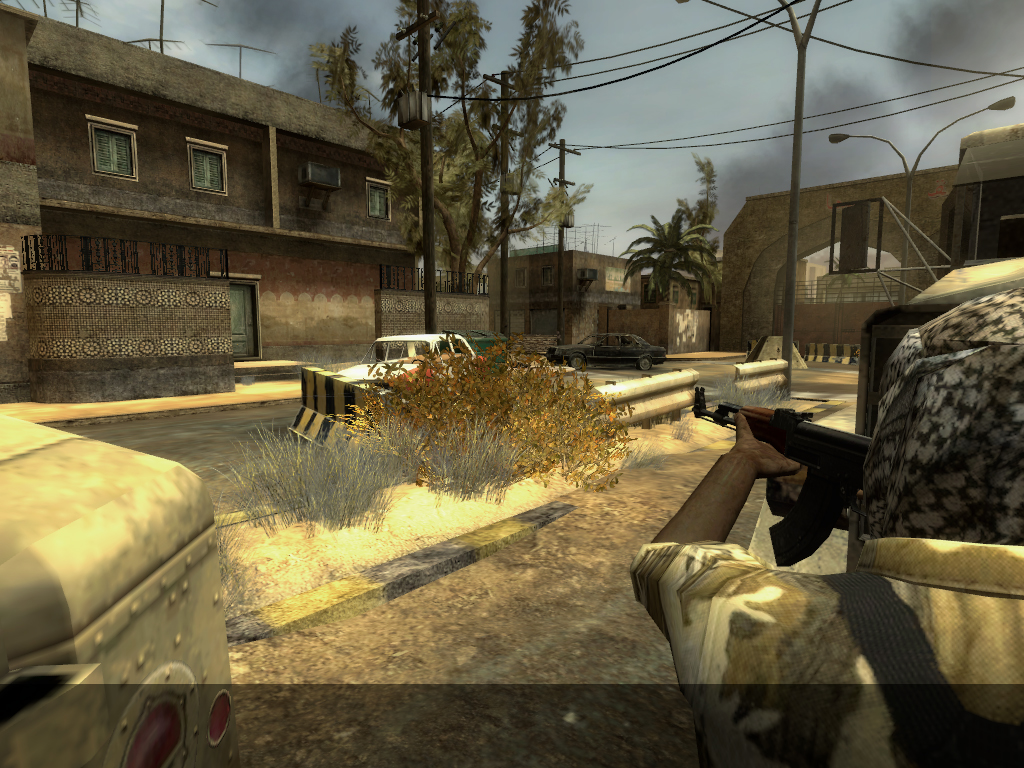 I never knew rundown third-world warzones could be so. . . pretty.

Insurgency's graphics are amazing. While the maps are not fanciful, and you're not fighting in endless fields of daisies, you'll have enough visual stimulation to believe you're in the battlefield. The maps are wonderfully made, providing cover pretty much wherever you need it. If you like using your skills as a strategist the maps are open enough to try different attack plans. The game has two main game modes Push and Battle. In a Push game both Marines and Insurgents try to capture four objectives. The objectives can be taken in any order, allowing the freedom to use a different strategy each round. Will you rush your opponents and work backwards, or play it defensively and slowly advance in a wall of warriors? It's up to you, just make sure you communicate. Battle type games place one team on the attacking and one team defending. The attacking team has to take the objectives in order, and the defending team simply has to stop them. As the attacking team takes points, their spawn point will advance and the defenders will spawn farther away, shifting the hotspots of the battle. 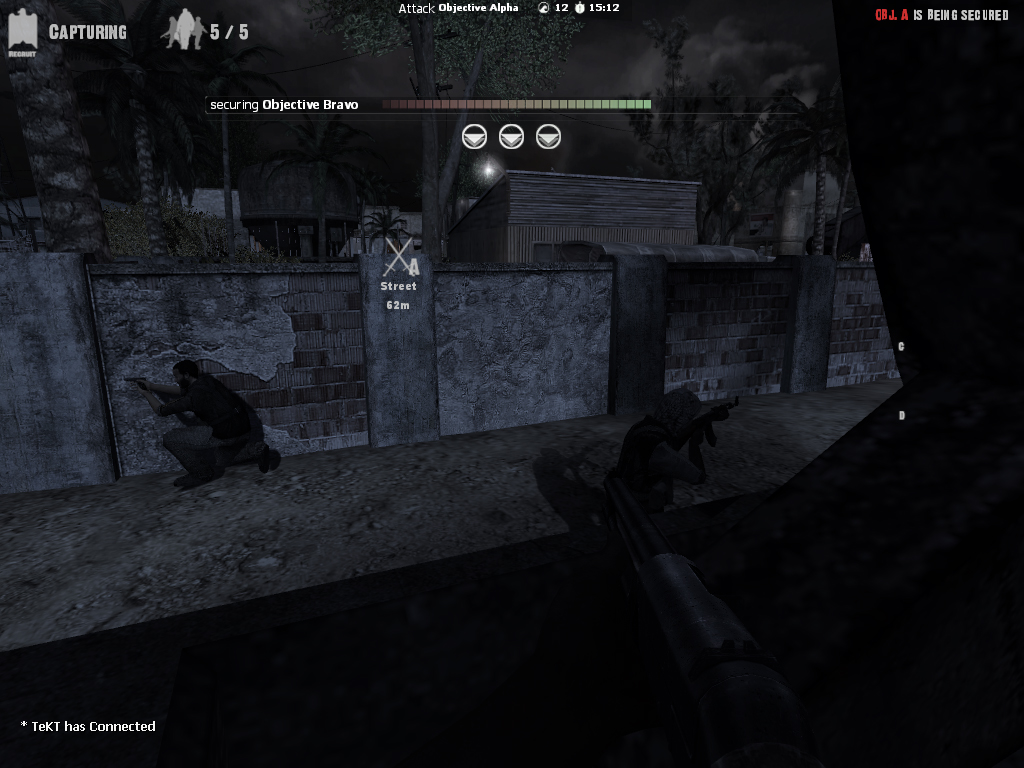 Objective Bravo's the thing wherein I'll catch the conscience of the Marines.

Equipment-wise, one might find Insurgency uninteresting, but the more you play with the seemingly mundane arsenal the more you?ll appreciate the slight variations of the weapons, giving each one a unique feel. If you're unhappy using iron sights, look towards sniper or sergeant, since these are the only two classes with scoped weapons. The weapons pull out the classical roles of soldiers: when you're tromping around with a SAW in hand, you'll be looking for a place to lay down some suppressing fire, allowing your team to move up while the enemy hides. If you have a sniper, you're finding a good spot to cover the entire field. The natural pull towards these roles provides the gamer with a different approach to each situation. 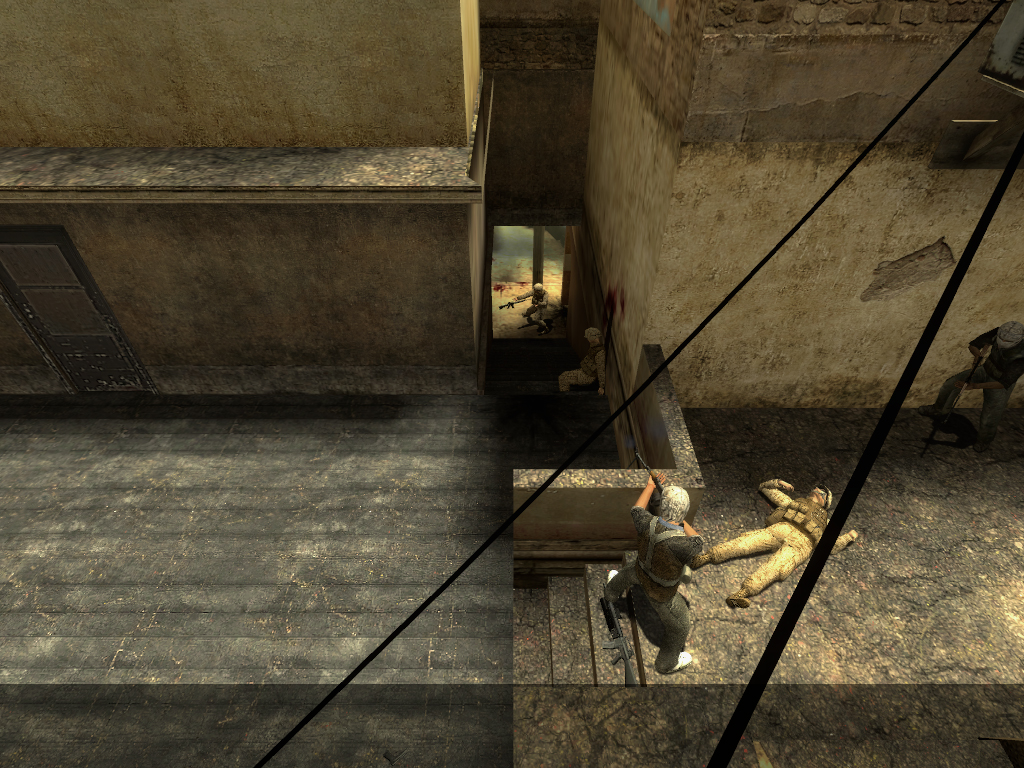 You'll be amazed how long it takes the other team to learn the stairwell you're watching isn't clear.

The Good: The game is beautiful, you feel the action. The classes are surprisingly unique providing players with the ability to run or gun, or fulfill your camping roots. Teamwork is amazing, and a great advantage, if not the core element of Insurgency. The game has surprising replayability since every situation has multiple angles of approach, even in the more linear Battle maps. Patch 2.x due sometime in November, '08 (hence this review), showing dedication to their creation. The game was recently promoted by Steam, allowing easy access.

The Bad: There is no single player, so if you are looking for a story search elsewhere. Teamwork - sometimes the other team will simply win over and over since they have it and you don't. Bug - not many present, however getting shot through tank armor while being invincible through car windows is a bit hypocritical. Selective audience - only people who like realistic FPS's will enjoy this game.