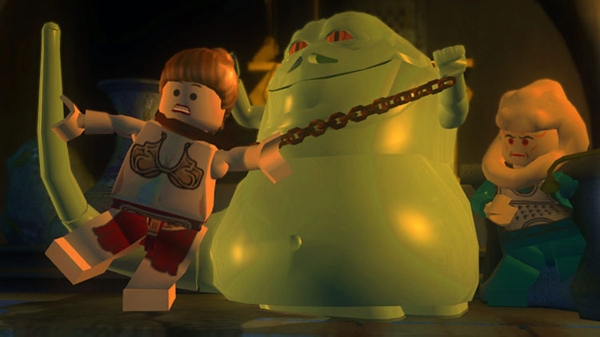 Jabba has always been a Ladies' Man

When I heard news that LEGO and Lucasarts were joining forces, excited would be a moderate way of describing how I felt. I played and loved the Original LEGO Star Wars, but I never got the chance to play LEGO Star Wars: The Original Trilogy, so I was happy when they released both of these games in one complete package. 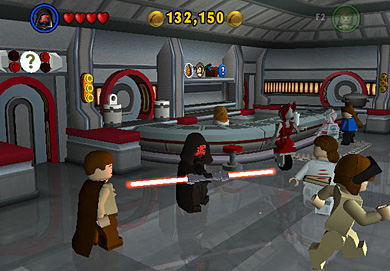 I enjoyed LEGO Star Wars quite a bit, but my main problem was that, because I'd played the DS version a couple of months ago, there wasn't enough of a difference between that version and the Xbox 360 version that I had played. On the DS version when collecting studs you only have to be in the general area of a stud to pick it up; however, in the Xbox 360 version, you must physically collide with a stud to pick it up. This mechanic change between the two versions often left me feeling frustrated with the game because I would die to no end, being the all-or-nothing person that I am, just trying to get that last stupid stud on a platform. On top of that, upon death you lose a substantial amount of studs - Sonic style, meaning that in the end I lost more studs trying to get that one than I would have if I had just left it alone. 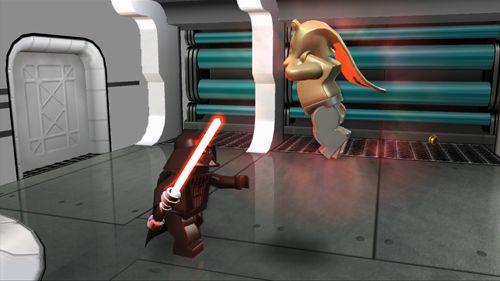 Why must everybody hate Jar-Jar?

The gameplay itself is very fun, it's more along the lines of classic platformers: there's no real skill involved in the combat, just mash the button repeatedly and you're bound to come out on top, but the average gamer isn't playing LEGO Star Wars for the combat system, so I can't imagine this bothering too many people in the long run. The main reason people play these LEGO games is to experience LEGO's unique take on several different universes. The Star Wars universe is no exception, it' bright and colourful with a dash of humour to give it that 'Classic Game' flavour. There's not really anything else I can say about this game, if you like Star Wars and you're partial to a bit of LEGO building then this is the game for you, there's no two ways about it, you'll have massive amount of fun from beginning to end, even if nothing about the game is revolutionary. It's a standard platformer, with standard platformer puzzles and scenarios, but it's LEGO and it's Star Wars. Where can you go wrong?

Long Term: LEGO Star Wars is outstanding in the long term, while the actual Story Mode itself probably lasts about 6 -7 hours, the amount of things you can do after this is extraordinary - easily increasing the total play time to well over 20 hours. Well worth the money in my opinion. 95

Multiplayer: While the game has multiplayer in the sense that you can team up on Xbox Live to play co-op with someone on the other side of the world, I can't really comment on it as when I was playing I never found one game to join. The graphics are simple enough for the game to be able to render at a decent speed, so providing you have a decent internet connection I can't imagine there being too much lag. I would recommend playing with someone you know though, as it is much more fun and you at least know you're going to get a game instead of waiting hours for Xbox Live to find you one. 80

Overall: LEGO Star Wars is a very simple, yet fun platformer with massive replay value, especially for young kids, but any fan of the Star Wars universe is going to get a kick out of playing. The length at which you can play this game and still be having fun makes it a very money friendly purchase. Fun + Star Wars + Lego = Win.