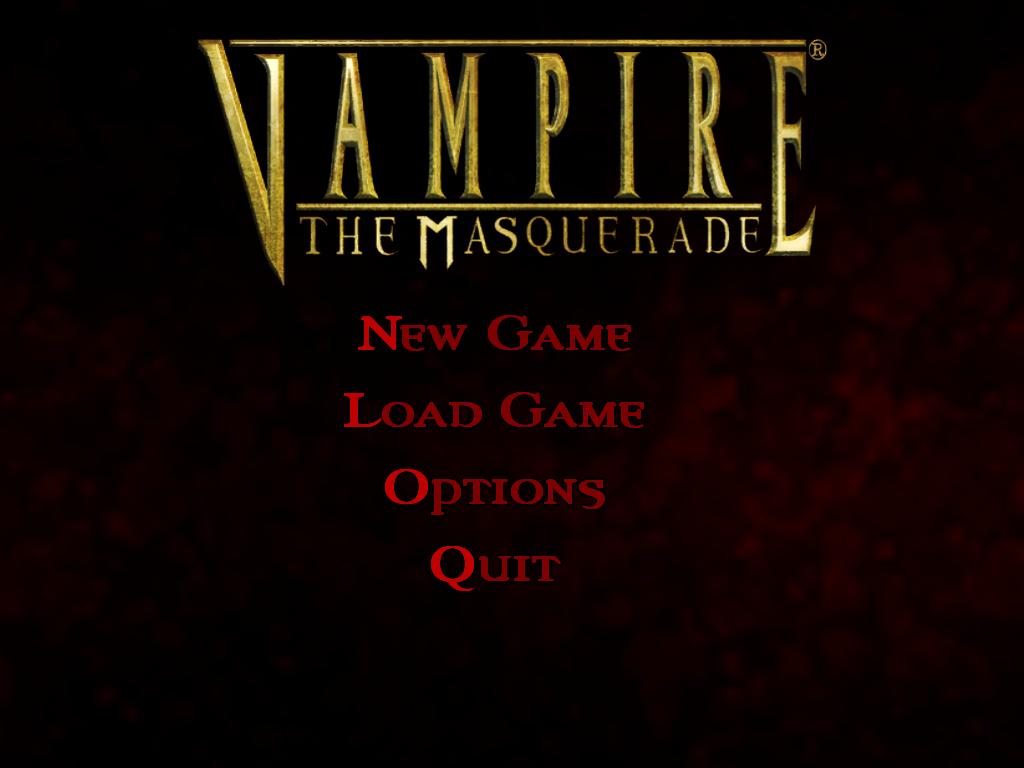 Darkness called, but I wasn’t home.

The player approaches creating their character in VTM by one of two methods: either choose to answer a set of personality questions, leaving the computer to pick your stats and vampire clan, or simply go straight to the character creation sheet and pick your clan and stats. There are seven vampire clans, each with its strengths and weaknesses. For example, if you’re a Nosferatu vampire, you’re hideously deformed and must always sneak around, even in the city, but you’re initially exceptional at sneaking and gain twice the sustenance from animal blood. The creation system in VTM allows you to generate any type of vampire you want, from a cowboy gun-toting vampire to a deformed wild animal vampire to a seductive-persuasive harlot vampire. The only downside of the creation system is the fact that your appearance is completely based on your vampire clan. The only change in appearance that the player controls between clans is gender. 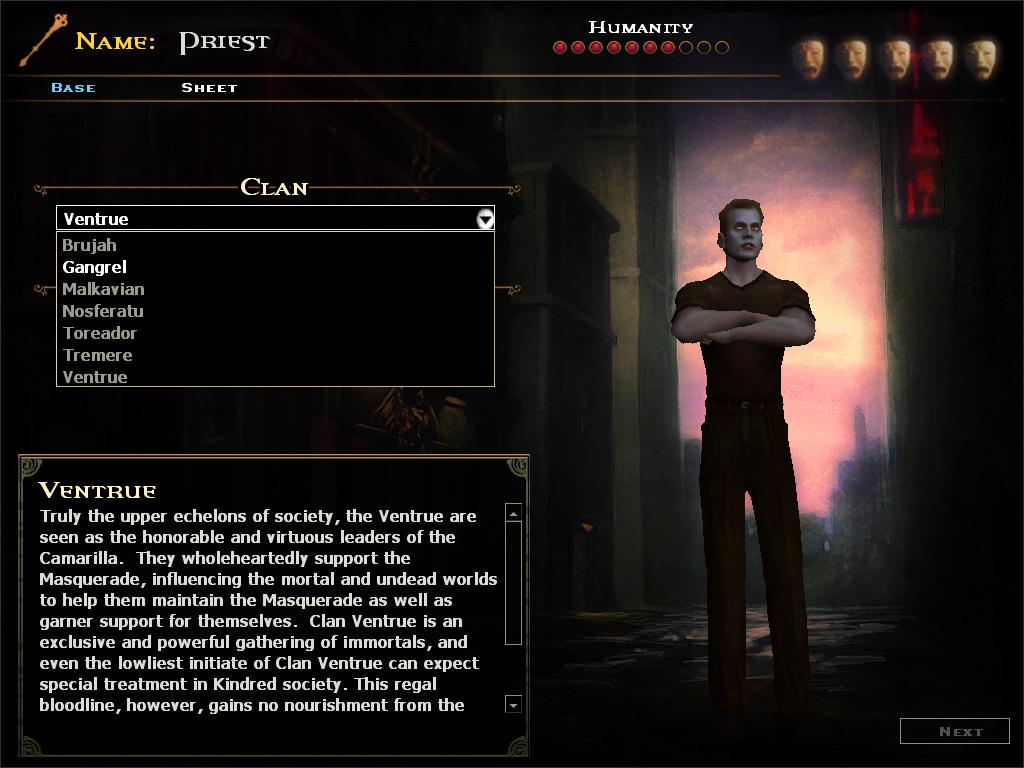 The game opens with you getting 'embraced', when suddenly three vampires barge into the room, taking you and your partner hostage. They bring you in front of a vampire council; it seems that your ‘sire’, the vampire who turned you into a vampire, did not ask for permission to create you. After your sire is punished, you are turned loose on the city with the task of proving yourself to the vampire prince LaCroix, who controls the city. At first the city is quite overwhelming, but you quickly adjust to your new body. During the game the player has a health bar, which regenerates over time, a blood meter, displaying the amount of blood in your body, a humanity count, and a masquerade bar. Using powers will lower your blood meter, which acts like mana; your humanity count tells you how in touch you are with your human side, and the masquerade bar tells you how many violations you’ve committed. The more you disobey the masquerade, the more other vampires and witch-hunters will try to assassinate you. If you break the masquerade five times, you lose. The lower your blood count and humanity, the more likely you are to ‘frenzy’, becoming extremely strong but uncontrollable. 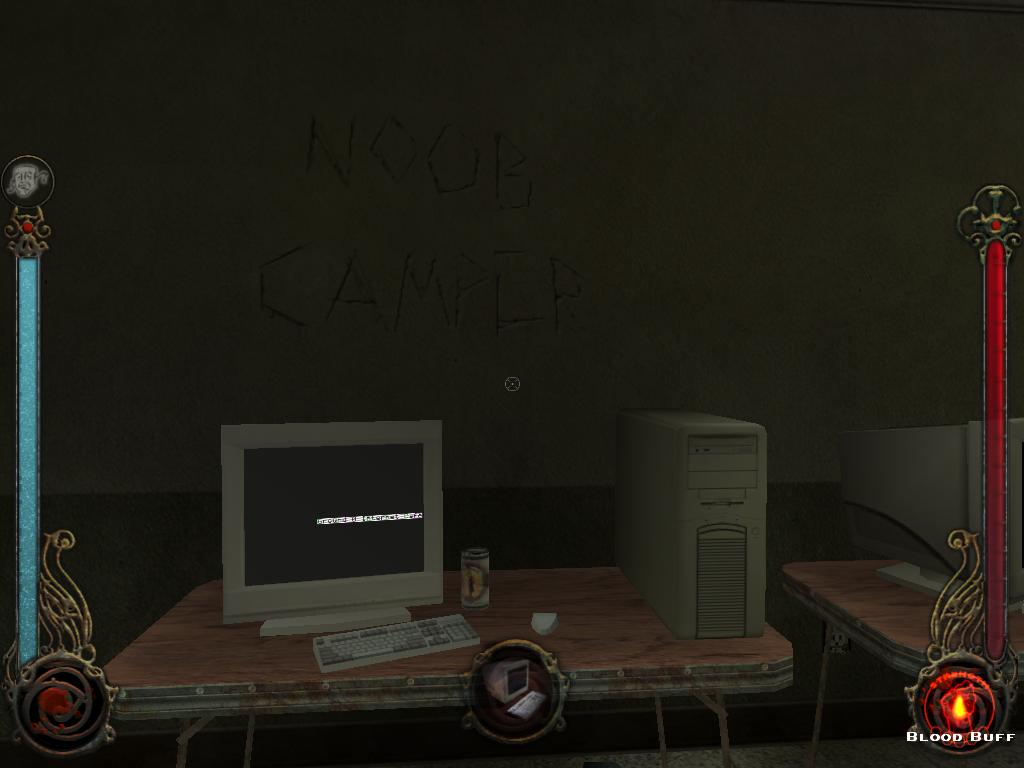 VTM is in touch with its target audience.

While the game is linear, it opens up further as you learn more and more about the situation. In the beginning, players are forced to work for LaCroix, but as you as you advance your knowledge of the game’s lore, you’re able to choose for yourself which political party you wish to support, or you can jump between them. The main parties are The Camarilla, headed by the prince, and The Anarchs headed by a vampire named Nines Rodriguez, but there are other factions the gamer can join. Based in White Wolf’s “World of Darkness,” VTM has an incredibly deep and solid history, devoid of inconsistencies in the storyline or jumps in plot: everything makes sense. If you’re captivated enough, you can learn more by reading other stories and playing the pen and paper games based in the “World of Darkness.” 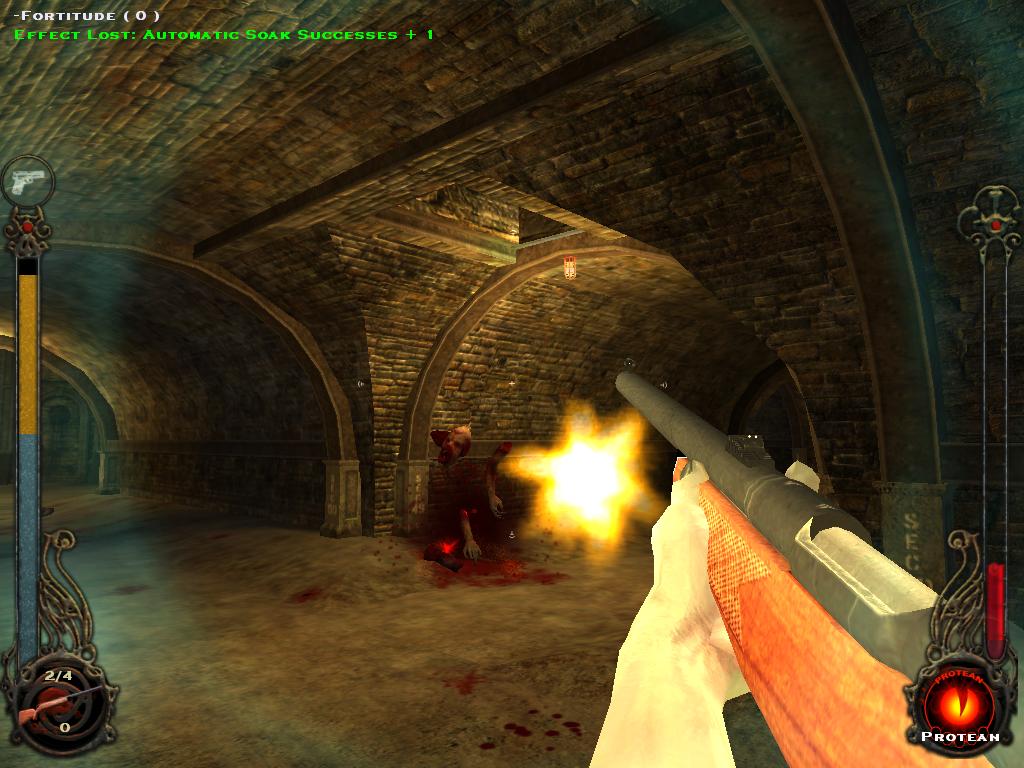 The combat system in VTM isn’t perfect, but it works. Melee, which is third person only, is often aggravating since other vampires are fast - making them hard to hit with no lock-on. The weapon choice makes melee a little more interesting, varying from unarmed to fire-axes to severed limbs. Each weapon has different stats: blunt weapons, such as tire irons, are better against mortal foes, while swords and knives are required to kill vampires and demons. You can also choose to use Vampire powers that are unique to each clan. Vampire powers are very effective against beings weaker than you, however the other supernatural beings can often resist such powers. Just like the weapon-choice for melee, the diversity of the spells really enhances immersion and entertainment; for example, one spell allows you to create a spirit-scarab, which burrows into your victim and eats them from the inside out. The main downside to focusing on powers is that you’ll have to find victims to feed on often to regenerate your blood level. You can also use firearms in combat. The guns aren’t as varied as the powers and melee weapons, with the most extreme firearm being a crossbow, but they’re the safest weapon to use. As in most games, ranged weapons allow players to keep their distance keeping you alive by allowing you to take a few good potshots before charging into the fray.  Smaller guns, like pistols, deal a lot of damage to mortals, but you’ll need to up your arsenal to shotguns and sniper rifles to take out supernaturals. The most obvious downside to the guns is the cost of the hard-to-come-by ammunition. 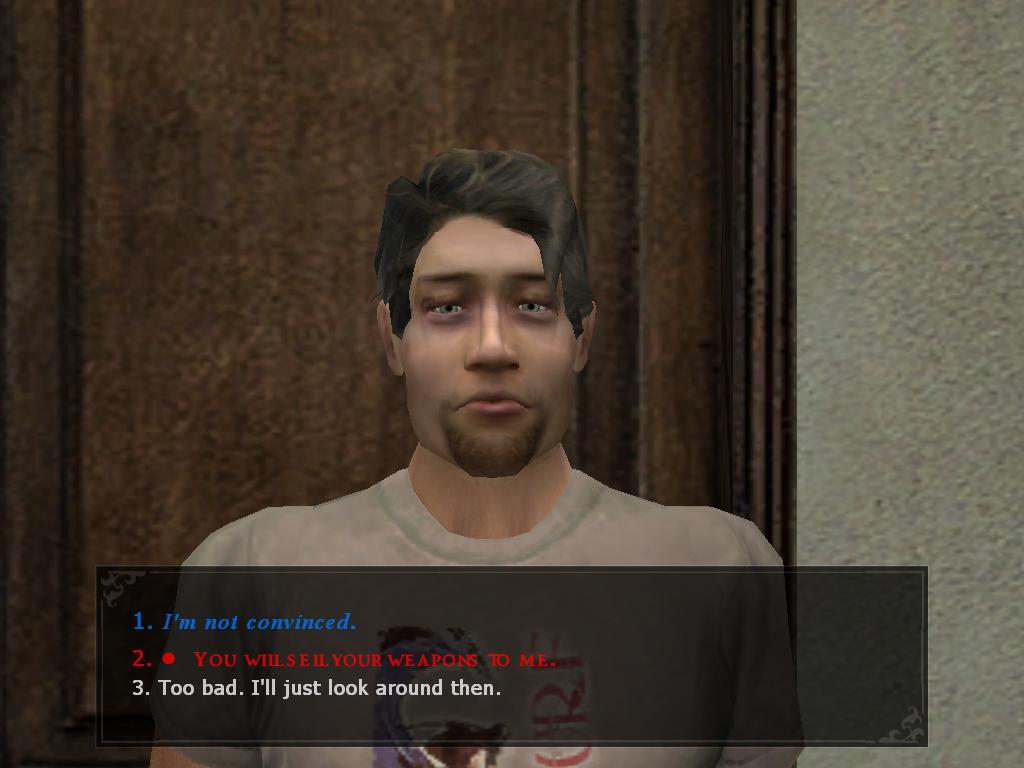 Combat is not the only way to get through a tough situation, as fun as it is to actually destroy your enemies, you’re also able to talk your way out of most situations.  The player’s charisma is governed by three main skills: persuasion, intimidate, and seduction.  The level of these stats changes viable speech options.  Even though these all lead to the same destination, they take different routes.  If your intimidation is high enough, a new speech choice will appear in bold red letters, signifying the potential to frighten or threaten your conversational partner (although it is not always successful).  Persuasion is the most basic of all charismatic skills, enabling the player to bluff their way through an entire dialogue, and seduction will entice targets to follow you back to your apartment or choice dark alley, allowing you to take advantage of a free meal – there is a free lunch after all. 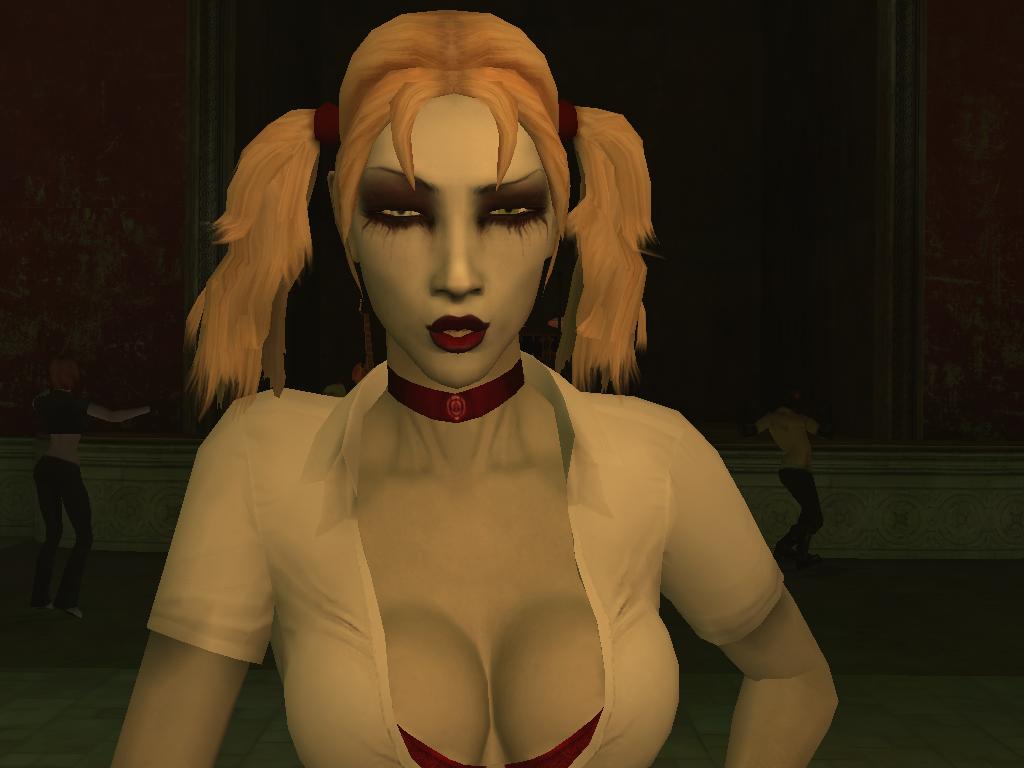 The Good: The game’s story, lore, graphics, and characters all come together to create one expansive, yet immersive atmosphere; greatly increasing the game’s replayability. You’ll want to play through the game a few times using different characters and classes. The gameplay is just linear enough so that you’re never looking for something to do, but open enough to give gamers freedom. The combat system is very versatile, supplying options of first person shooting, third person hack and slash, and sneak & sabotage. The game is also relatively bug free, only revealing one bug during my entire run: a man on the street simply disappeared.

The Bad: The melee system leaves you a little wanting and is not at all intuitive. It is not possible to skip most cinematics/cut-scenes. Your character’s appearance is limited. There is no multiplayer, although this is understandable.  Minor bugs are annoying.