During the 90s, point-and-click games exploded onto the gaming scene as a new way to experience a slowly-evolving, interactive story. Yesterday is a game that uses this style of play and brings it into the modern day; its point-and-click, story-driven mystery begs critical thinking for every situation presented - in terms of our Gaming Personalities article, the Thinker and Adventurer will feel the most direct connection with Yesterday.

Note to self: Never tell a man with a gun that he has something in his nose.

Will this dark, thrilling, adventure/investigation game stump you in ways you didn’t even think possible as you approach a slowly climaxing story? Or will you feel like you’re playing a puzzle game with tacked-on drama?

The story feels a lot like The Borne Supremacy: You, initially playing as John Yesterday, suffer from amnesia and are trying desperately to remember anything you can at all. There are two other playable characters, though, each with a unique background and personality: Henry White, a somewhat pretentious, stuck-up, rich kid and his friend Cooper, your typically strong guy. 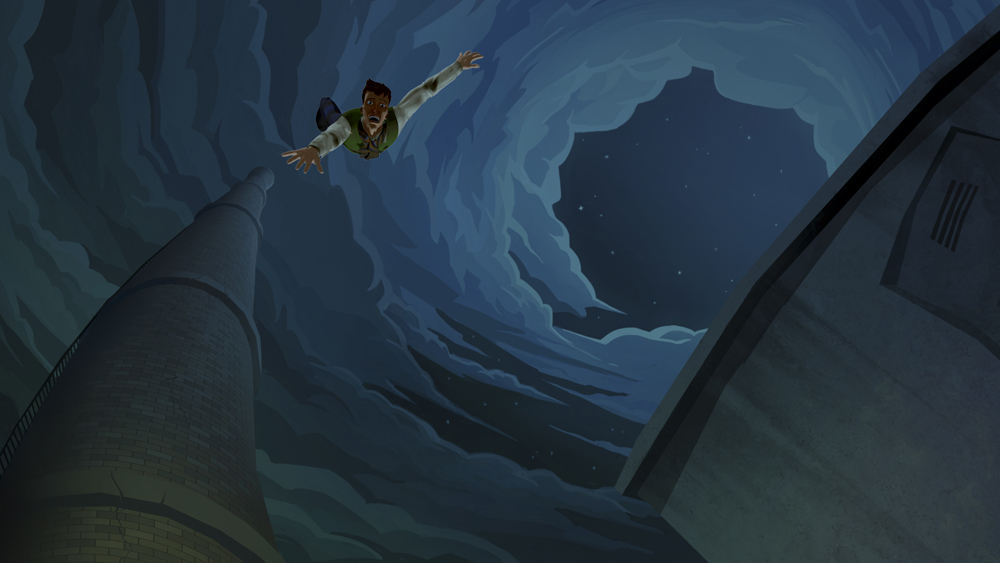 It’s difficult to speak of the story without spoiling anything -- it is a story-driven game, after all -- I can say this, though: There is a twist around nearly every corner. Everything centers around NYC (when doesn't it?), where beggars are being burned alive, random individuals form Y-shaped scars, and our adventurous trio becoming increasingly intrigued.

That's really all I can say without spoiling anything -- you'll have to play the game to see the rest of the story unfold.

The gameplay is relatively simple - it uses the traditional formula of most point-and-click games. You're placed in a static screen where there are specific clickable areas on that screen; for everything that you can inspect, you can read a quick description on it, and attempt to use the object or pick it up. If you do find something you can take, it will be added to your inventory on the bottom of the screen. You can mix items in your inventory, and/or use them on inspect-able parts of the scene. 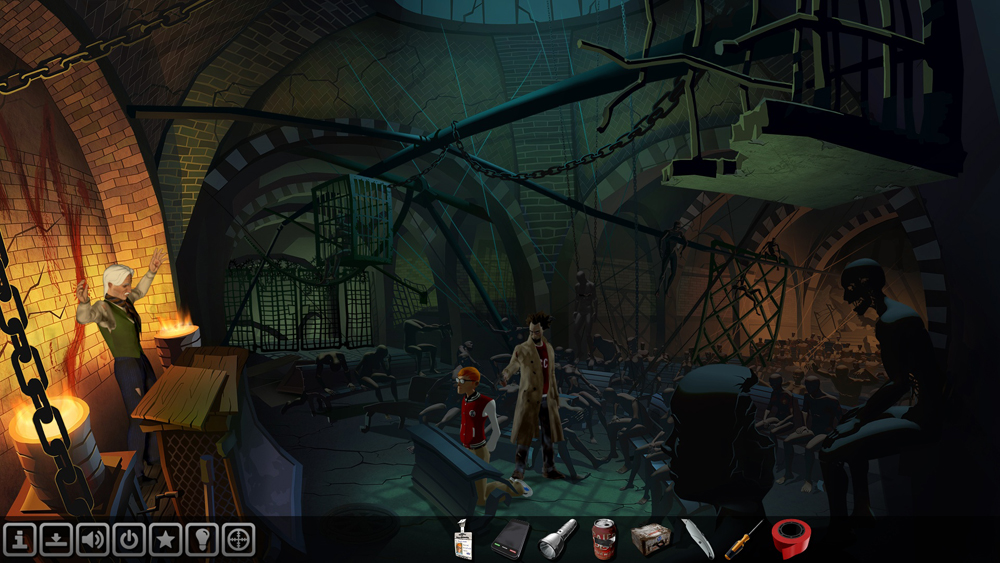 This can sometimes lead to guessing-and-checking every object with every inspect-able piece, but that’s inevitable in adventure games. For those times when the going gets tough, the developers where kind enough to put in a hint system in the bottom menu bar, but using it initiates a cool-down timer to, of course, avoid spamming.

All of the dialog in Yesterday is voice acted and, for the most part, very well voice acted, which is something we can all really appreciate. Written words really do need specific voices to accompany them -- as we've all figured out through reading of text or chat messages, emphasis on particular words can make a huge difference in the overall tone and meaning of a sentence. The only downside is that there were some bugs in the audio, resulting in clipping and instances where the voices were cut out every once in a while, but not very often.

The music, as with the voice acting and art, was scored perfectly for the theme, setting the atmosphere in some areas, while others are given the dramatic silent treatment as music slowly fades in and out while you pace the scene looking for any clues. Sound effects help encourage and improve user interaction, but more importantly, reward it with sounds when something was executed properly, even before the visual effect for it triggered.

From a technical aspect, the graphics themselves shouldn’t really impress any PC gamer. They're a very strange mixture of digitally-painted 2D images and some 3D models, but it's pulled off in a seamless manner. Animations during cut scenes are fluid and believable, but are trod on by jittery and twitchy mouths and facial expressions during dialog. 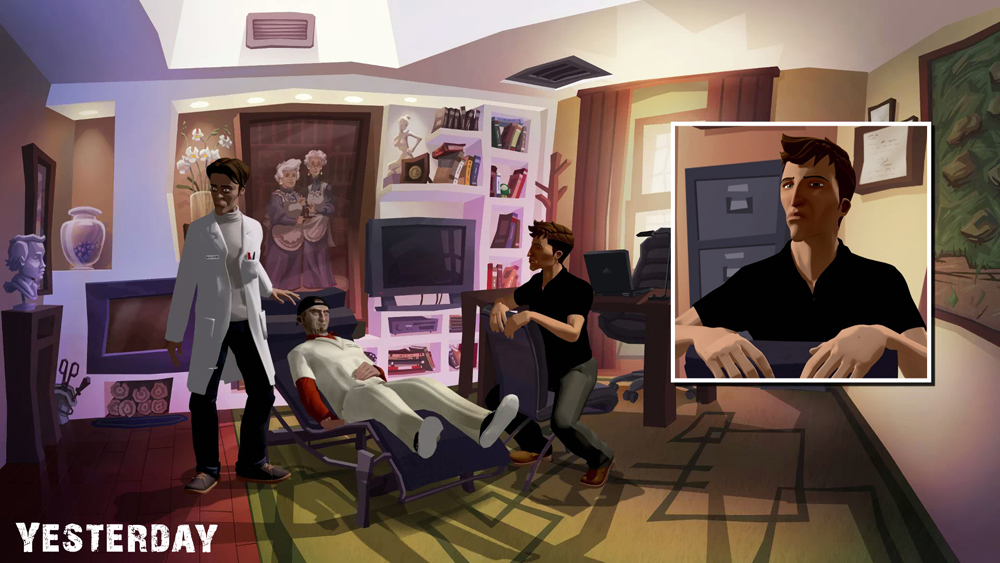 It's very annoying, really, but I eventually caved to the twitching faces and assumed that maybe, just maybe, everyone in this town was just really excited to see me. Or something like that. Lighting, particles, volumes, and other high-end effects are mostly just pre-drawn into the scene, making Yesterday a more viable option in terms of hardware specifications (our recent $437 gaming PC build will have no trouble running it). The technical side of the aesthetics -- the graphics -- aren't all that impressive or fancy, but Yesterday easily makes up for that with its vibrant and inspiring art. 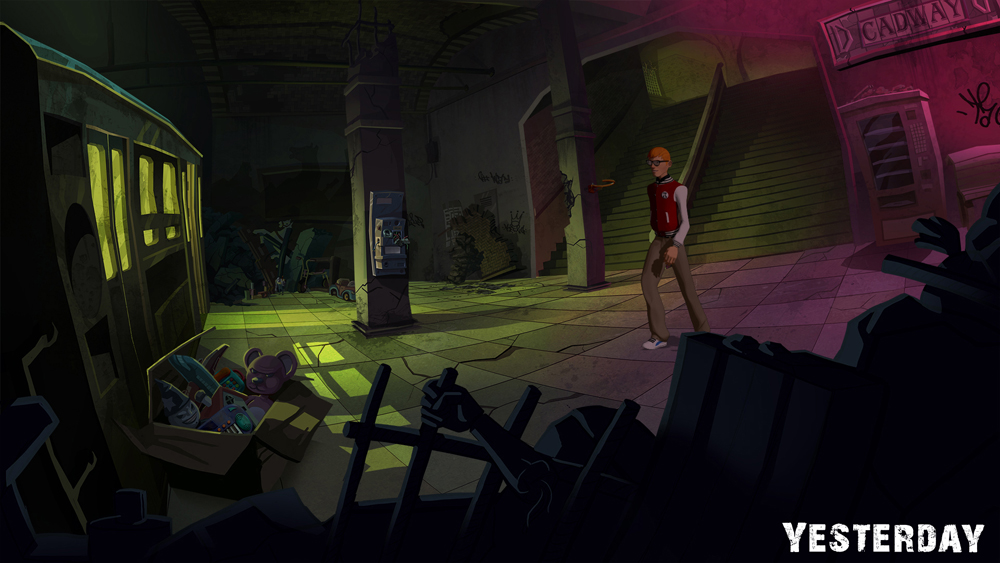 The art style does "creepy and eerie" exceptionally well, but at the same time, the game is beautiful to look at. None of the set pieces or items or characters ever looked out of place for the game, even though it is a combination of both 2D and 3-dimensional art. There are some very large and wide-scaping areas in this game where the artist just looks like they’re showing off, honestly, but that's not necessarily a bad thing. The artistic direction reminds me a lot of an old PS2 game called “XIII.” with its use of cell-shading and the comic-styled panels during cut scenes. The story kind of reminds me of XIII too, actually, for those that remember it.

You can tell a lot of thought and design meetings went into the production of Yesterday. For the most part, the developers executed the wording in their questions and statements in very specific ways, helping lead you to the correct answer without ever handholding (which we hate), or at least without you noticing. The point-and-click gameplay system does have some drawbacks - thankfully, though, the developers could see the weaknesses of this fairly static and droning gameplay; with the added "highlight all the things" button in the menu bar, it's impossible to get stuck for silly things, like not noticing you can click on roll of tape in front of a box. There's no slow rise in difficulty -- sometimes you get stuck, and sometimes you don’t, but the game never really builds up on things that you have previously learned in effort to create more complex and interesting situations, as we found Waveform to do. In fact, the first solvable problem requires building one of the most complicated contraptions in the entire game by using very simple tools in a Survivor Man sort of fashion, which isn’t a bad thing at all, but was a much unexpected solution, especially that early into the game.

Yesterday is a game that knows what it wants to be, and does what it can to be the best at it. It delivers on its strong visual and audio appeal and asks you to think of common items in a new light, pressuring that oh-so-rare-in-games critical thinking. The story will do what it can to pull you in as well, ultimately becoming your main driving force to get tasks accomplished. If you’re funding Tim Schafer to build his next point-and-click title right now, then you’ll probably want to check this game out while you wait. If you’re waiting for a fast-paced action game, then this game most likely isn’t for you.

Yesterday is available on Steam now.