“Last time I checked Gods weren't any human, never mind Too Human... A standard battle goes something like this: charge in, swing sword (the gun thing is totally useless, it's like shooting them with spitballs), things die, men complain, on to the next wave, repeat until brain melts" 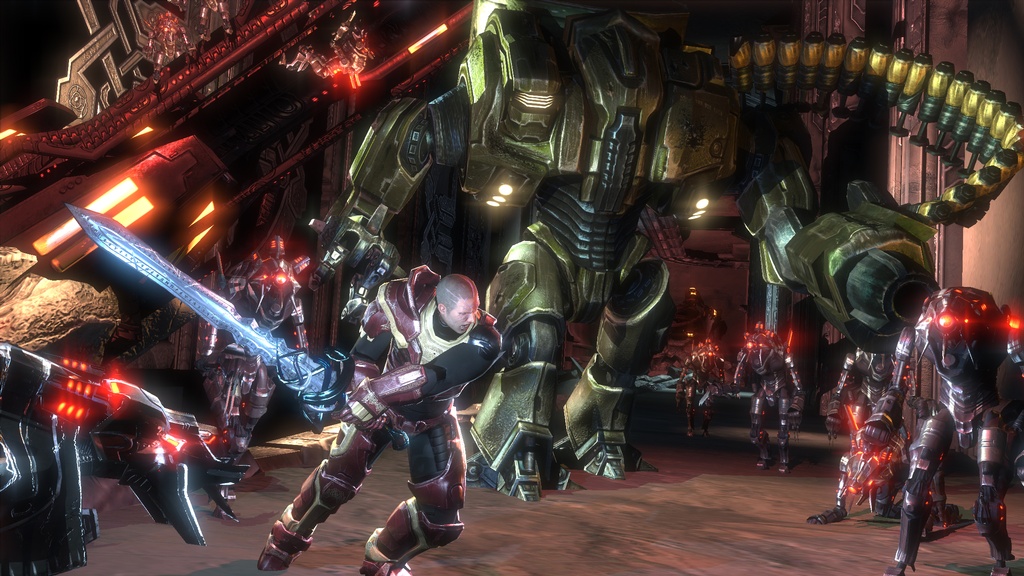 That sword will do a hell of a lot against that robot.

First of all, before I get into this review I'd like to tell you all a little about myself, ever since I was young I've been interested in mythology, lore, and old world religions. I just think there's something mystical and magic about them, maybe that's what led me along the long and winding path towards geek-dom, I don't really know. As you can imagine, when I heard that there was a new dungeon-crawler game coming out and that it was based heavily on Norse mythology, naturally I was excited to get my hands on it. When I also heard that the developers, Silicon Knights, had spent almost 10 years developing this one game, my gaming radar was set to 'Heightened Senses.’ So, did Silicon Knights spend 10 years developing a masterpiece, second only to Michelangelo's panting on the roof of the Sistine Chapel, or did they spend it throwing paper aeroplanes across the office to that girl that they're too shy to ask out? 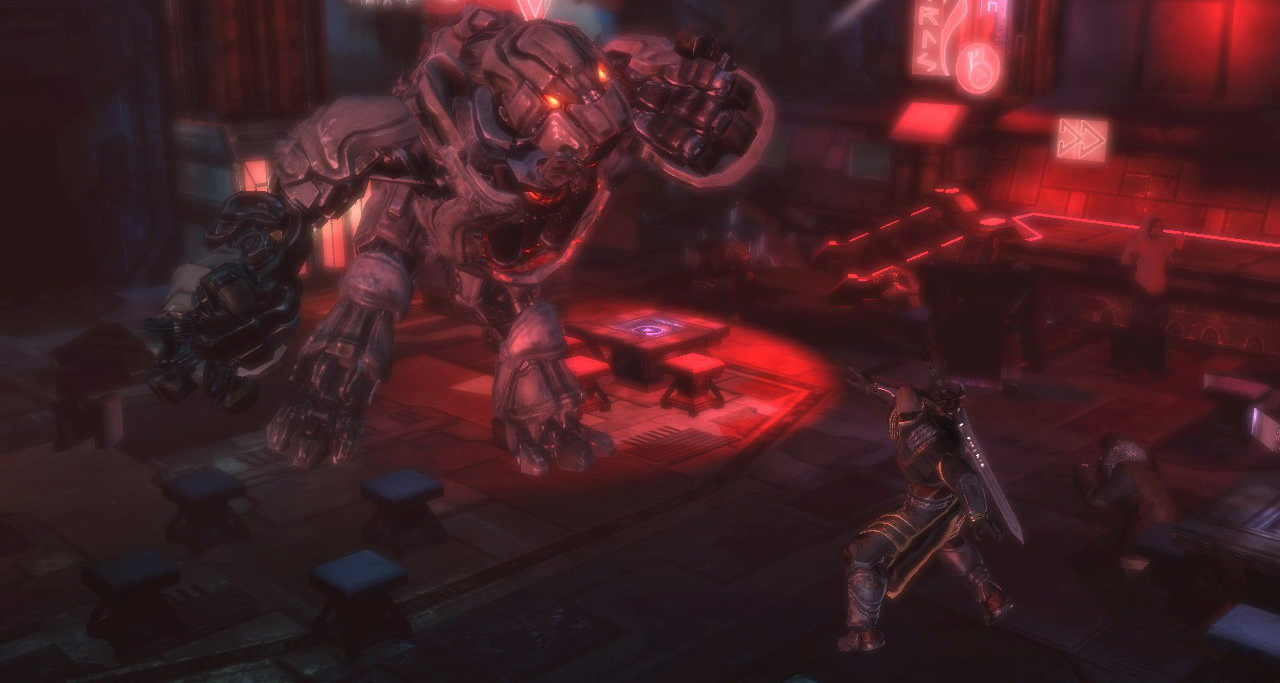 I won't beat around the bush with Too Human; it's not very good.  If you're looking for a clear and concise verdict about whether or not to buy this game, I'd skip it, or rent it at the most.  It's definitely not worth buying.  That said, when I loaded the game up it looked amazing, the graphics engine they're using is similar to the Unreal 3 Engine, so you know what you're getting in regards to quality. The voice acting is good during the cut-scenes but a bit repetitive during the main game; the men all act like pansy boys, constantly complaining about the fact that they're not getting back alive, “yeah, way to bring the team morale up moron.” The character design throughout the game is good, I like the idea of updating the Norse gods to what they would be if they were still around, I don't like that they've made some of them into office workers (they're Gods, they should be out smiting things, right?). As for the enemies I think that the robots are suffering from the same thing that the Transformers were suffering from in the big budget film. Too messy, too much stuff sticking out to really make the enemy characters appealing. I've no idea why they decided to go with robots in the first place, I think that something else would have been a lot more appealing to the masses. 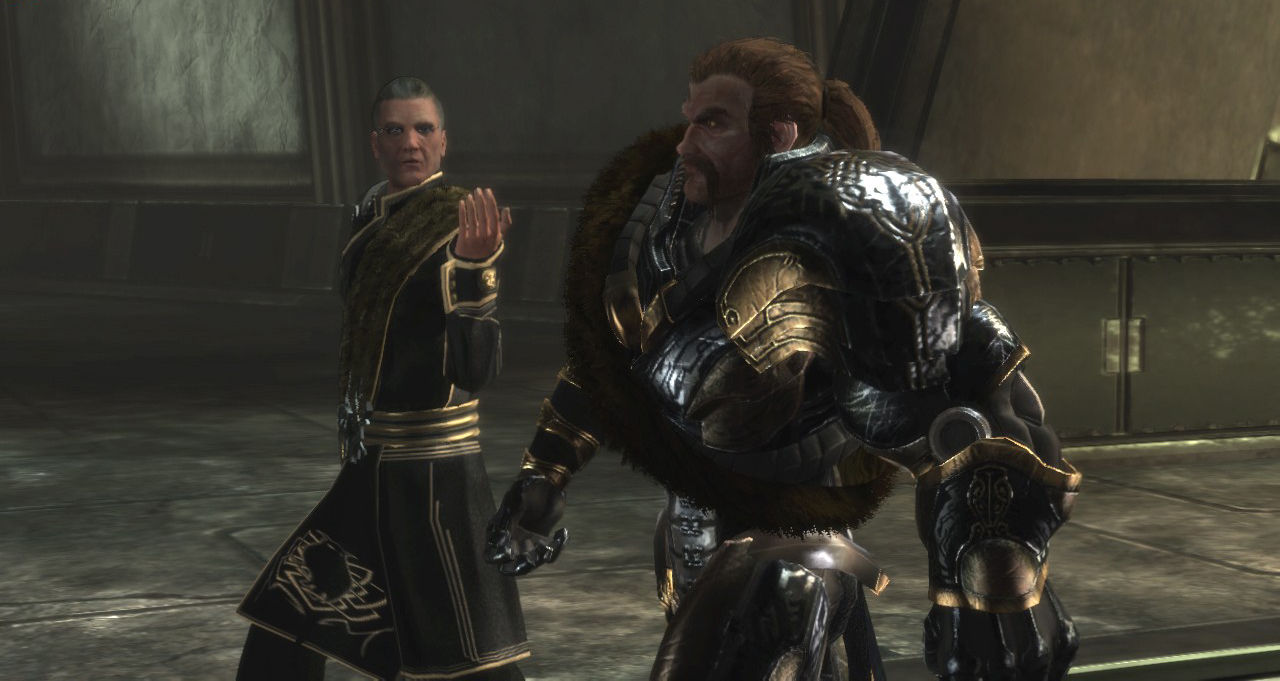 Yes, they are actually from the same game.

The gameplay is good at first, but after about an hour of it you really start to feel the repetitiveness of the whole experience, a standard battle goes something like this: charge in, swing sword (the gun thing is totally useless, it's like shooting them with spitballs), things die, men complain, on to the next wave, repeat until brain melts. The dungeon crawler experience is also something that starts off good and then gets extremely tedious, every enemy drops something and quite often it's slightly better than what you've got, which means that you're going to be doing one of two things, you're either going to be constantly inside your armour interface, swapping and changing armour and weapons, or you're going to think “screw this, I'll do it at the end of the level,” which is what I chose for the most time. There's just too much loot to be content with, sure give us loot, but don't give it to us all the time, hold off until a boss or after something particularly hard.

Short Term: If you're only interested in the killing bit I suppose Too Human isn't too bad for short term play, there are plenty of save points dotted around. For the average gamer, the story doesn't allow for short-term play, and anything longer than 30 minutes just isn't fun. - 50

Long Term: I would really try and avoid playing Too Human for too long - anything more than 30 minutes, if you want to get through the game alive anyway. Any duration after that amount of time and the game starts getting increasingly tedious and drawn-out. Not very entertaining at all, too bad. - 30

Overall: On the whole I'm not quite sure where the 10 years for Silicon Knights went; it surely didn't go into making this game. Judging by their wiki page, they spent it changing console loyalties and suing people. Not bad if you want to make some money I suppose. Next time they should try making a game. Just a suggestion. If you're on the fence about this game, do yourself a favour and borrow/rent it. Buy a good Norse mythology game, like Viking: Battle for Asgard :D