“Some people say having a co-driver is help, I say it's just a person I can smack in the mouth when I miss the corner.” 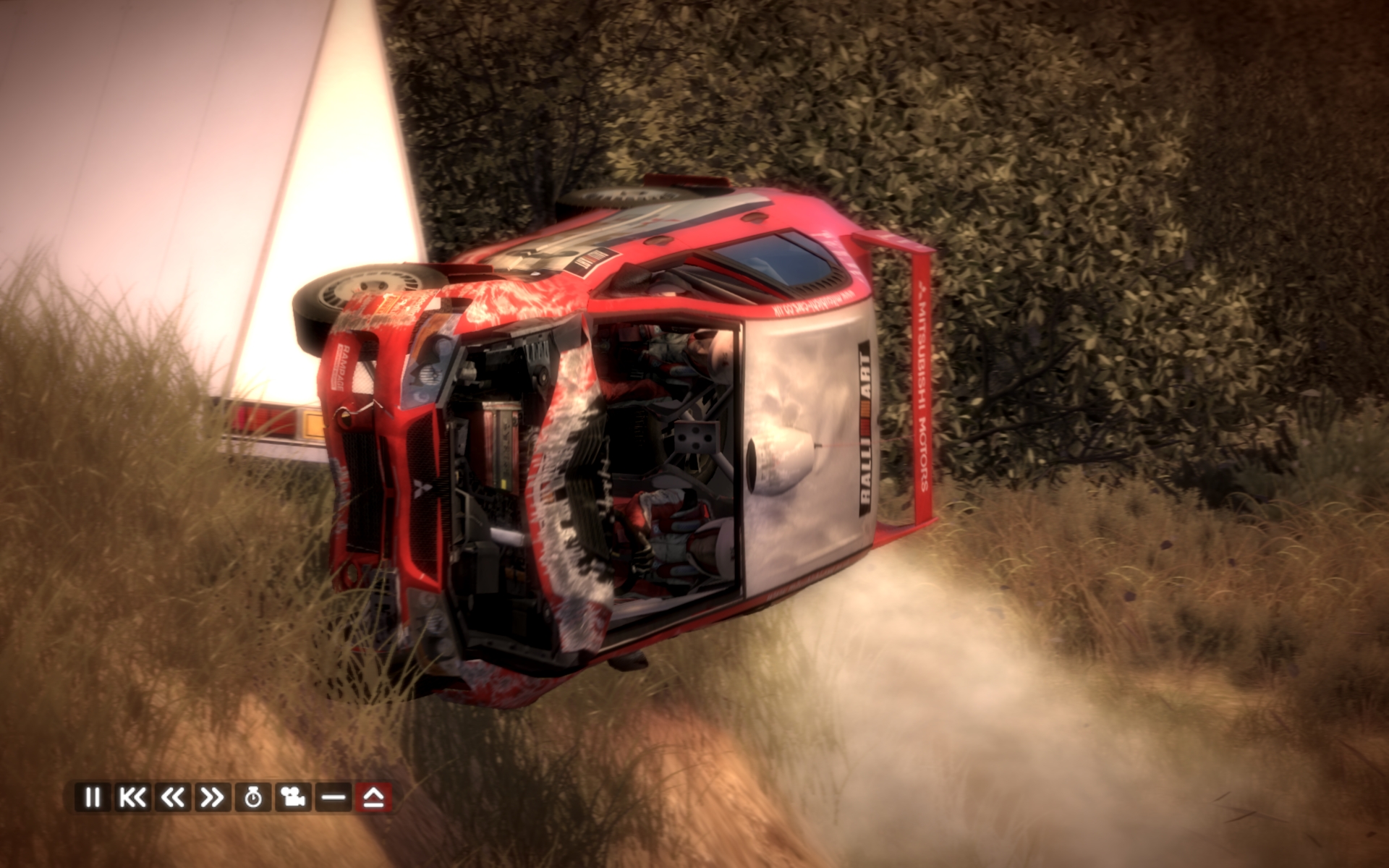 This tin can just got annihilated.

I've always been a fan of the Colin McRae franchise, ever since the first installment back in 1998 on the original Playstation.  It’s 10 years later and they're still making them. When I played the demo for DiRT, I was curious as to why it wasn't just called Colin McRae Rally X, like they used to be, but after playing the game for 10 minutes it becomes clear: this game is more than just a rally game; in fact, actual rally driving is only about a third of the game content!  The rest is dune buggy style course races and straight point-to-point races using a variety of different vehicles. Whether that's a good thing or not from a game with a rally driver's name attached to it is up to personal opinion. I don't think it is. 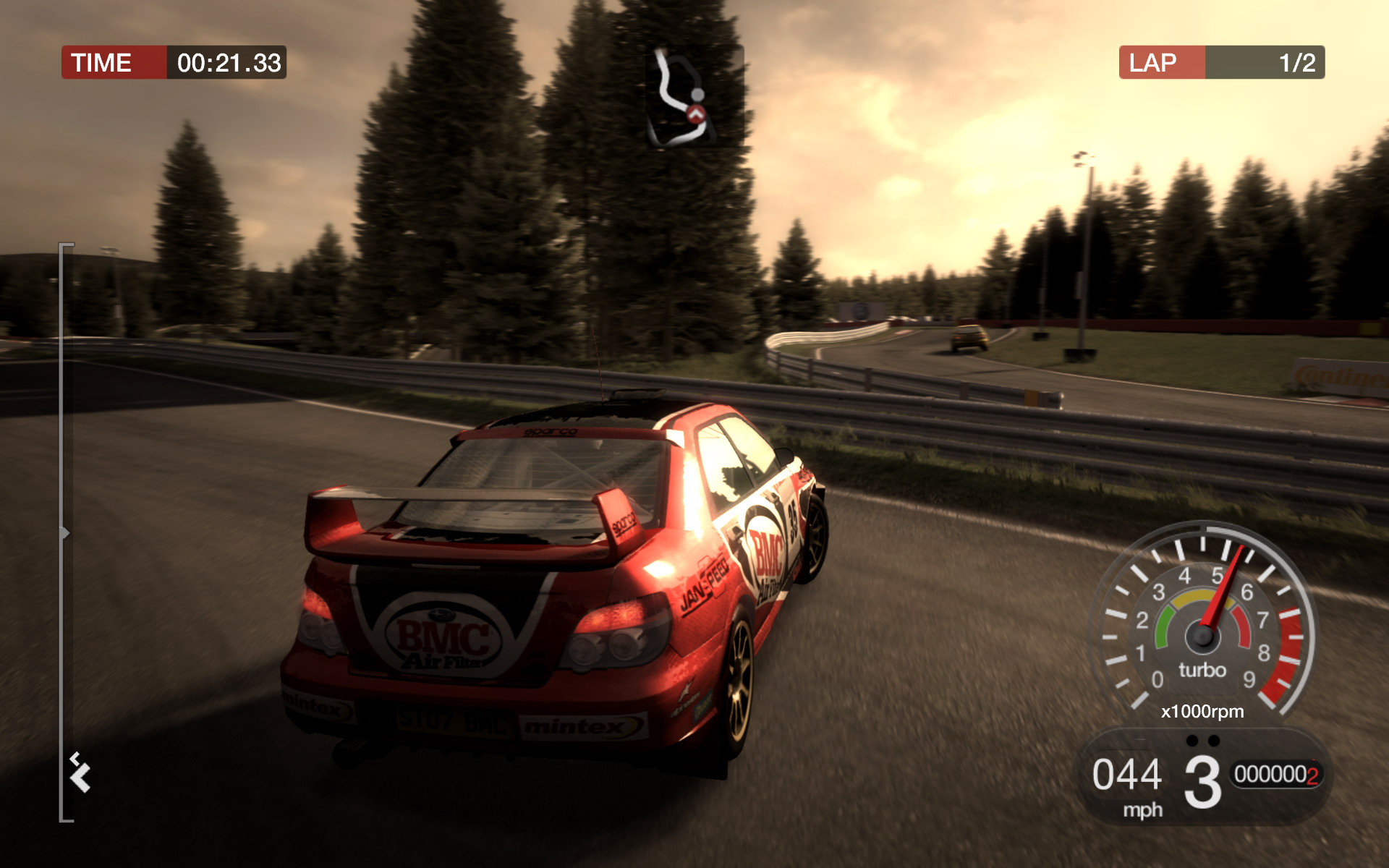 Look at those tre- OMG WALL!

DiRT looks amazing.  The usage of the Direct3D 9 Bloom lighting effects adds a lot to the visuals of each environment. I drove off the track many times while playing in each different locale just by paying more attention to the environment and lighting effects. Another plus point to the game's engine is the feeling of weight that each of the cars has. Most racing games I've played in the past get some kind of glorification from showing each of the cars flipping over and over at the slightest scrape against the courses’ borders, but in DiRT, this isn't the case at all.  As I mentioned before, I crashed MANY times on all the courses, and I only managed to flip the car twice. Although some people who enjoy watching cars flip unrealistically might not enjoy driving cars of this weight and realism, I'm not one of those people. I admire game developers for making their simulation games actually simulate things. Crashing without flipping is also rather satisfying in DiRT, the game uses similar car crumpling mechanics as Burnout: Paradise but with a little bit more realism and without the amazingly annoying slo-mo camera that Burnout had.

The good points of DiRT far outweigh the bad points, but only if you enjoy racing games. The championship mode is the section I had the most problems with, but not anything to do with the gameplay. My main problem was with the simple repetition of the game’s limited amount of different game modes. There are 66 championship games, most of them including more than one race.  This means that even a modest racer would find themselves repeating the same game modes with excruciating regularity. The only other problem I had while playing DiRT?  Probably the slight lag issues during the online modes, which in a racing game, differentiates between a win and a loss. The reason I'm not tearing the game a new one over lag problems is that lag could be caused by a multitude of issues, ranging from my crappy internet connection to the fact that I mostly played during peak times and my ISP sucks. So I can't, in good faith, blame the game for something that might not even be its fault.

Short Term: Colin McRae DiRT is very easy to just pick up and play for one or two races. The way that the menu system is designed and laid out enables the player to just pick a track, pick a car and be racing within minutes. The mere repetition of some of the tracks would lead me to believe that most people would only play this game on a short term basis anyway, so getting people into a race quickly probably benefits the game. - 90

Long Term: DiRT isn't a bad game for long-term play if you like racing games or simulation games. Real racing drivers have to race on the same courses over and over again and are expected to know each track like the back of their hand, so on that basis it's not hard to understand why there is only a limited amount of tracks. For the casual gamer however, they will get bored, and very quickly too. - 75

Multiplayer: The multiplayer was good, but as I said previously, as with any racing game, the slightest of lag spikes will make your car drive hood-first into a wall at 90 mph +, and with a game as realistic as DiRT, you're not going to be able to correct any big mistake in time as the weight of the cars themselves means that you need to be in complete control of the car at all times. With multiplayer, unless you have an amazing connection, this just isn't the case. Having an option to be able to play multiplayer locally would have been a massive asset to DiRT, as this would have enabled the player to game with a friend without having to deal with lag issues. - 60

Overall: Overall Colin McRae DiRT is a very solid racing game, the physics are realistic, and the crash mechanics are bone chilling. The tracks, for what little there are, are well imagined and gorgeous, as are the lighting effects. Multiplayer lets DiRT down however, since it lacks a local multiplayer option, and by keeping the realism true even to online play, making twitchy movements is a necessity, which sometimes isn't possible online.
Last modified on June 05, 2009 at 11:15 pm