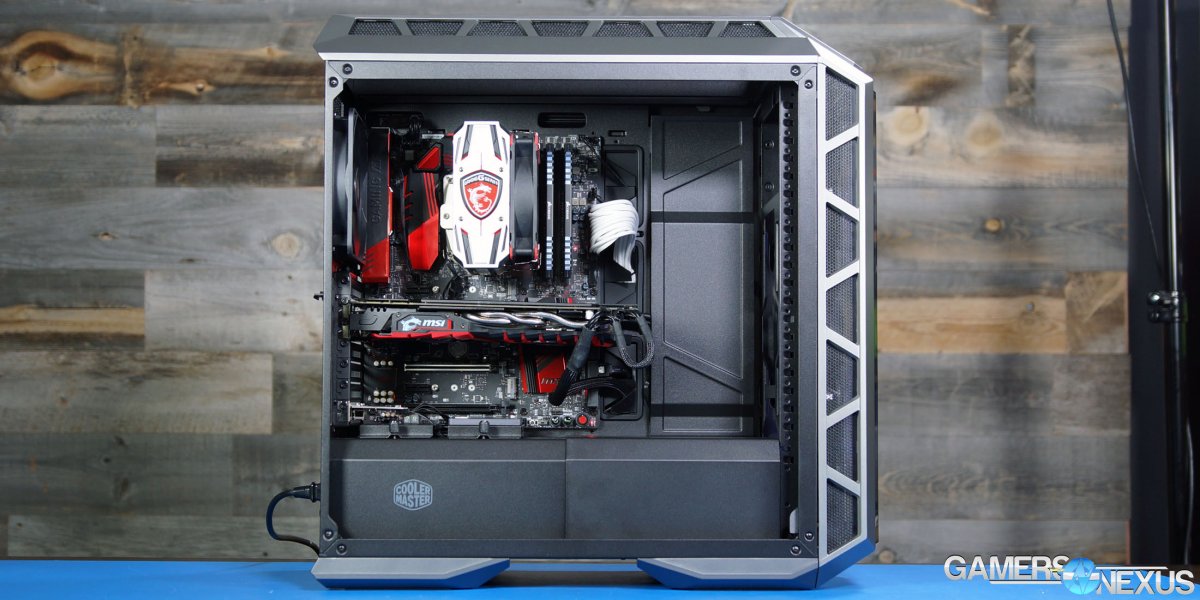 Starting with radiator placement testing, we’re using the new EVGA 240 CLC as a stand-in for top versus front mounting tests, measuring both GPU + CPU thermals throughout the process. Because the fans are such a major selling point for this case, we’ve tested a few different means of leveraging them, including relocation. The idea is to attempt to keep the original fans when possible, though we did run some modified tests for academic purposes. The EVGA pump and fans were set to max RPM for these tests, as we’re just looking for consistency, and the CPU voltage and frequency were set to their usual fixed values.

Before getting to the chart, here’s a listing that defines our testing configurations for radiator placement:

These tests are conducted with our thermal torture scenario, which places both the GPU and CPU under 100% power virus workloads. 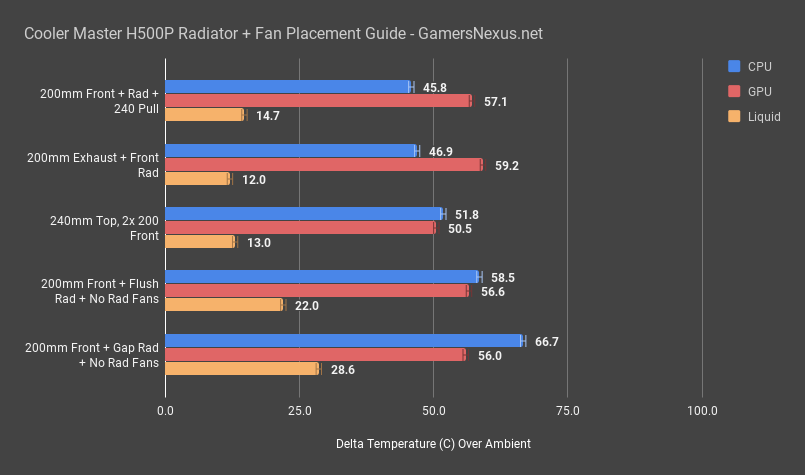 We found that the CPU thermals performed best when the radiator was positioned between the 200mm fans and the stock EVGA fans, configured in a push/pull setup. This brought our CPU temperature to 45.8C delta T over ambient, with liquid temperatures at about 14.7C over ambient.

The GPU, meanwhile, suffers a bit. We’re up to 57C over ambient now. With an ambient of roughly 22C, that’d put us as nearing 80C for the GPU diode temperature – not far from throttling. This is with the Twin Frozr cooler set to 55% fan speed, which is about where the coolers tend to max-out on the fan profiles. You could obviously drive this down with a faster GPU fan RPM, but it may be better to just build things differently. The GPU gets hot because the CPU is dumping heat onto it, and directly onto both the backplate and into the cooler.

Testing with the radiator flush against the 200mm fans, but with the EVGA radiator fans removed, we end up with mediocre CPU and GPU thermals. The GPU isn’t suffering as much for this one, but the CPU temperature has increased by about 13C, with liquid temperature up about 7C. Those radiator fans are doing a lot of work.

For the final front-mounted configuration, the radiator had a gap between the 200mm fans, with no radiator fans mounted. We found this to be the worst configuration, pushing the CPU toward 67C over ambient – or nearing 80C, accounting for ambient. That’s about where an air cooler would put you, and the GPU is still warm.

Running with the radiator in the front with EVGA’s fans pushing, and with the 200mm fans in the top as exhaust, our numbers output as 59C over ambient for the GPU and 47C over ambient for the CPU. Although decent for CPU temperatures, the top exhaust fans are pulling all the air away from the GPU. We lose any dissipation potential that we had.

It seems that the best configuration is to configure the 240mm radiator in the top, with the fans pushing up-and-out, and then use the 200mm fans as front intake. This results in 51.8C CPU temperatures and 50.5C GPU temperatures over ambient. That’s ideal, because our CPU and GPU numbers are now closer, reflecting a better-balanced system cooling configuration. Besides, we want the GPU as cool as possible – a CPU’s performance won’t change much from an extra 5C of heat, but a GPU’s boosting performance will. 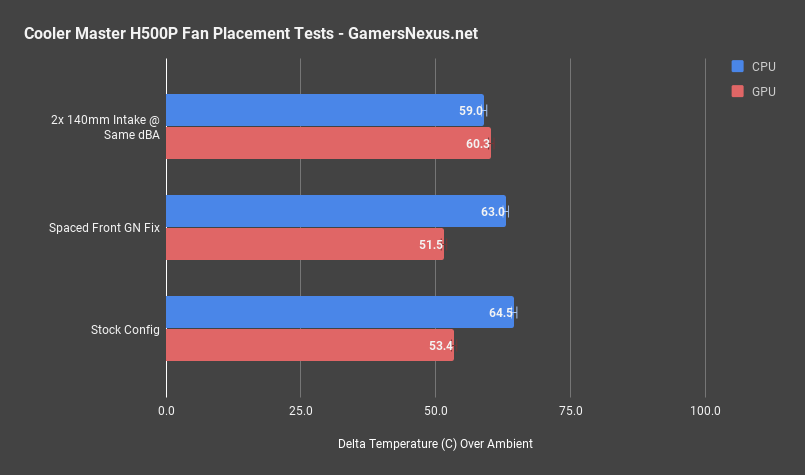 Moving on to air tests, we’re switching back to our original Core Frozr cooler that was used in the review and using some slightly changed data analysis methods, so these numbers are not going to be directly comparable to previous tests.

With the stock configuration tested under our new method, we are measuring 64.5C over ambient for the CPU, with the GPU at 53.4 over ambient. Remounting the panel with a makeshift 0.5” spacer allows the mesh to better align with the front 200mm fans, but doesn’t help enough – we’re still at 63C over ambient on the CPU, or 51.5 on the GPU. That’s a drop of about 2C, for what it’s worth, but we get a bigger drop by fixing CM’s choked-off front panel with inset fans. If you remember from the review, the 200mm fans protrude outward enough to kill about half the ventilation. We installed two NF-A14 fans and fixed them to the same decibel level as the 200mm fans, so we’re at the same noise levels as the stock case, but with way better cooling for the CPU – though worse on the GPU, due to the positioning of the fan.

The CPU temperature falls to 59C from 64.5C, with GPU temperature rising 7 degrees as a result of more limited airflow over the cooler. In the least, the more directional airflow of a top 140mm fan is outperforming the 200mm fans at the same RPM.

Some of these differences illustrate limitations of static pressure performance of the CM 200mm fans, something which we plan to further demonstrate in tomorrow’s content piece. We’ve fixed the H500P thermal issues by way of a mesh mod, with the results filed and the video/content in editing now.

Check back for that.