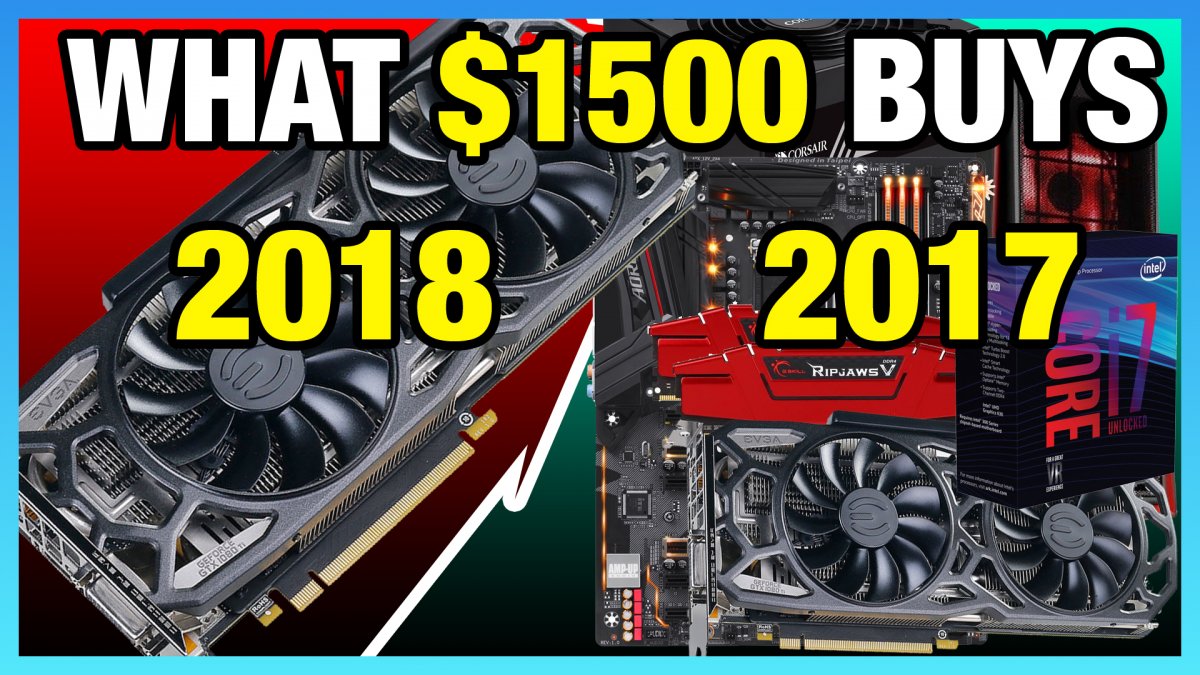 Today, we’re benchmarking a 2017 “MSRP” PC build versus a 2018 current-price PC build, using a $1500 budget. Our objective was to see how far we could push performance at around $1500, using only new components, when comparing the best prices of yesteryear versus the prices of today. If there must be a point to this content, the primary takeaway is to avoid purchasing new GPUs at prices so far beyond MSRP that they enter old flagship categories.

As for components, we’re using Intel as a baseline, as platform scalability makes more sense when tested between the same architectures (going to Ryzen, for instance, would make for better performance in Blender, but worse performance in games, thus killing the point of a like-for-like dollar-stretching benchmark). Intel has also had the most severe price swings in the past year, whereas AMD has remained largely steady at launch Ryzen prices, and has often dipped well under them. Intel has remained north of MSRP or at MSRP.

Our builds are as follows:

Now, admittedly, there are a few things we’d do better with these: In 2016-2017, we’d have more options available for rebates and combo deals, and generally other options not visible from the future. We’d have chosen a better power supply, for example, but one reaches a limit of digging through historical data for an imaginary PC build.

Let’s do some benchmarks. 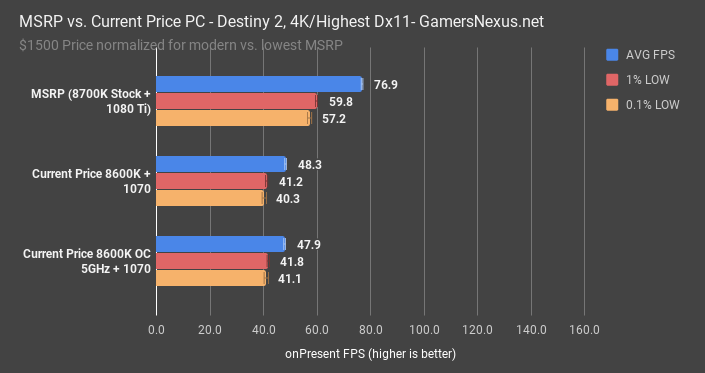 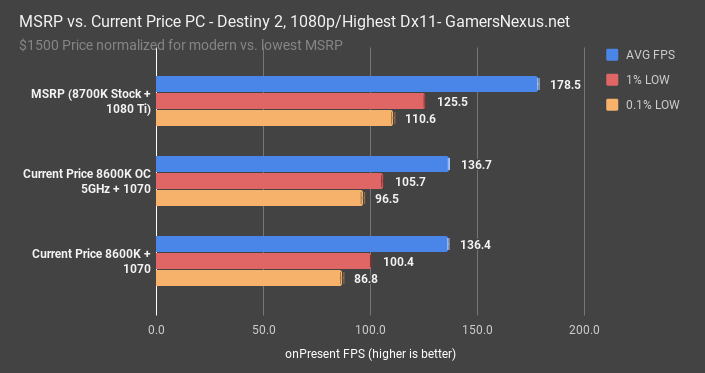 Destiny 2 starts us off with a DirectX 11 title. At 1080p and highest settings, our MSRP build was bumping up against a 200FPS limiter, so the average would be higher than shown if we could have exceeded the 200FPS cap. Regardless, we’re still at 179FPS AVG, with lows respectably at 125FPS and 111FPS. The current-priced build, including the CPU-overclocked variant, landed at 136-137FPS AVG. This leaves the MSRP build a lead of 30%.

At 4K and still highest settings, our MSRP build is about 60% ahead, making 77FPS averages and nearly 60FPS lows possible, thanks primarily to the would-be $700 1080 Ti. By contrast, the currently-priced $800-$850 GTX 1070 operated an average of 48FPS, with lows falling to 40FPS. The framerate difference is perceptible, and definitely noticeable during gameplay. 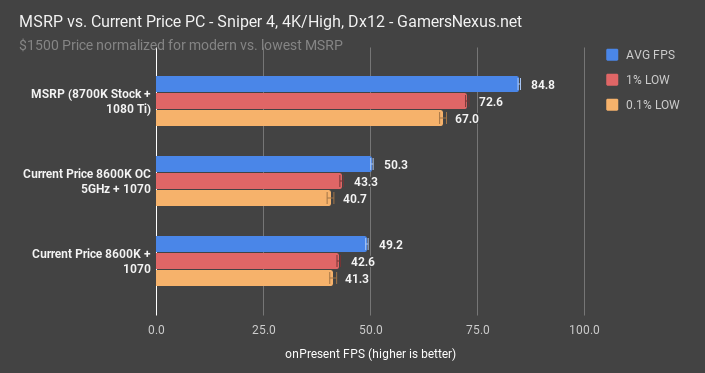 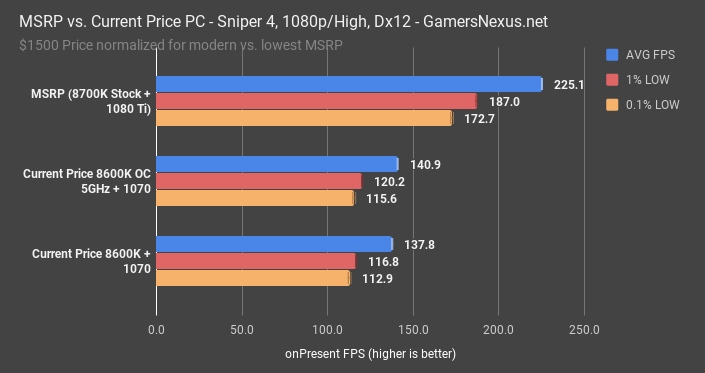 Sniper Elite 4 provides us a highly optimized DirectX 12 title – something rather rare right now. For this one, at 1080p, we saw average framesrates of 225FPS for the MSRP build, stretching the limits of the CPU and GPU jointly toward the upper-end of the framerate. The current-price build ran at 138-141FPS AVG, depending on overclock, resulting in the MSRP build leading by about 61%.

4K shows similar results scaling, with the current-priced build exhibiting occasional tearing, while the MSRP build operates a framerate in excess of 80FPS. 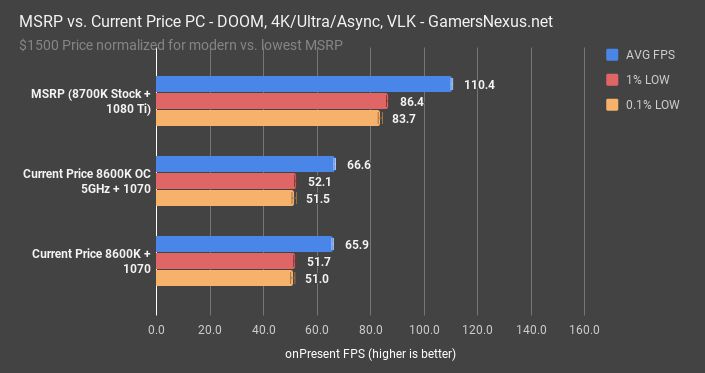 DOOM provides a Vulkan API look at performance. For this one, because DOOM runs so well, we’re using 4K as the only test resolution. Asynchronous compute is enabled, as it enables at 0xAA, though some people still don’t seem to know that. With these settings, we’re at 110FPS AVG with the MSRP build, lows hovering above 80FPS, while the build with modern pricing sits around 66FPS AVG. We’re about 67% ahead on the MSRP build. 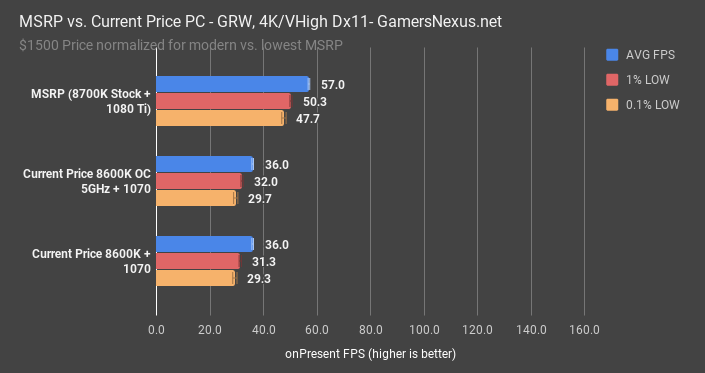 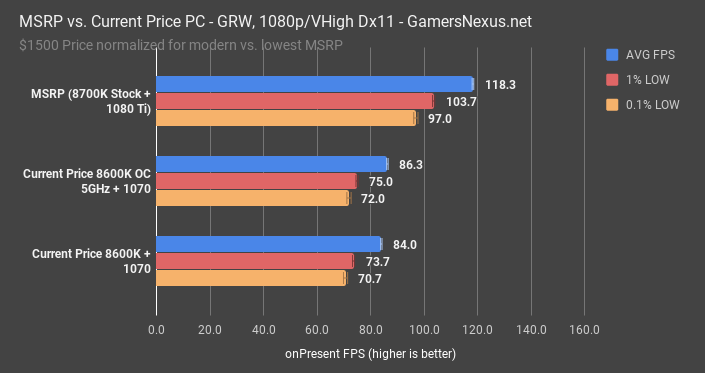 Ghost Recon brings us back to DirectX 11, this title built by Ubisoft. The MSRP build doesn’t have quite as much of a lead in this game, but still sits at 118FPS AVG at 1080p, versus 84-86FPS AVG for the build with modern pricing. Scaling is similar at 4K, where we go from 36FPS to 57FPS AVG. 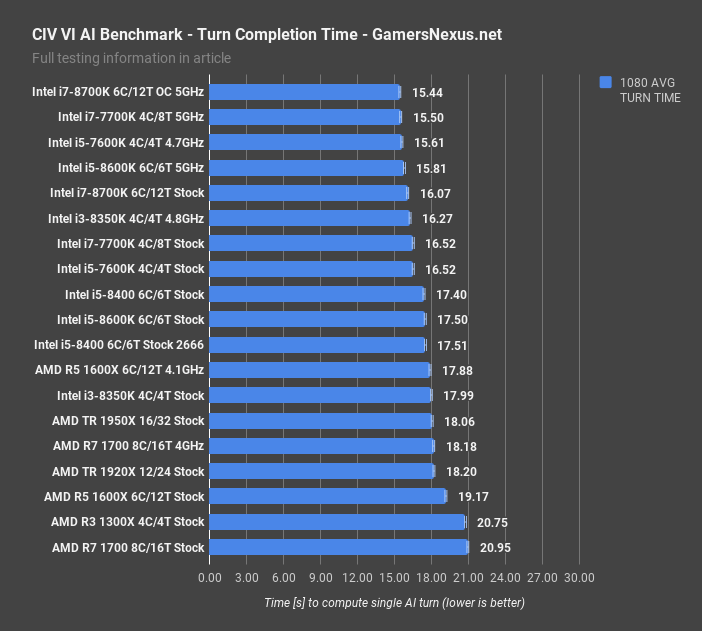 Civilization VI mostly just pulls from our previous test data, as the AI turn time benchmark is entirely CPU-bound. The MSRP build completes turns in about 16 seconds, with the current-priced build, using an 8600K, finishing the turns in about 17.5 seconds per turn. This places the 8700K about 8.6% reduced in required time. Memory speed does not seem to affect this benchmark very much, as we previously demonstrated with the i5-8400 at 2666 and 3200, where we saw the same performance. 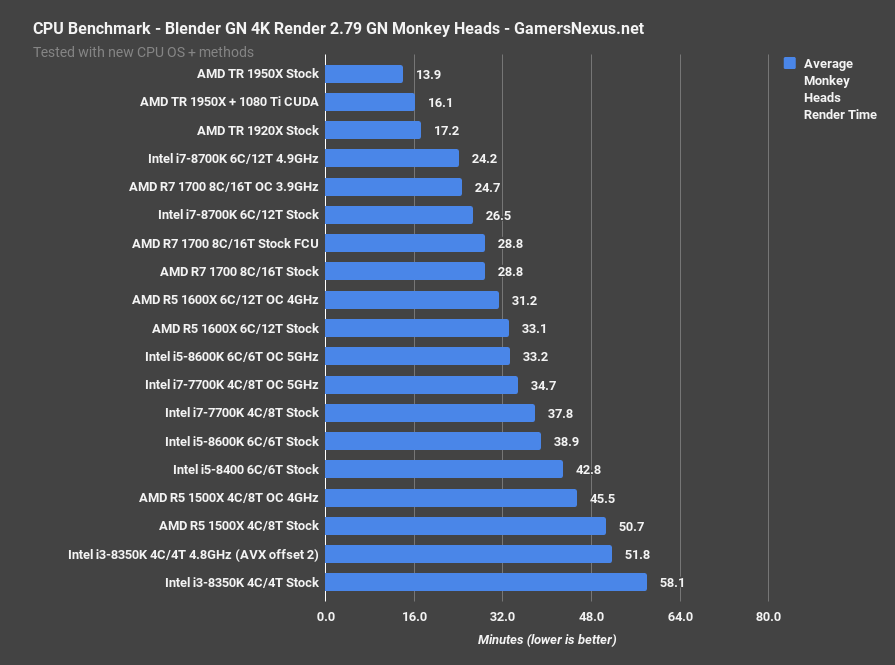 Blender CPU performance would largely align with what we’ve shown in our CPU reviews, as there is no dependency on GPU, and there is very little difference between 2800 and 3200MHz memory.

Blender CUDA rendering is done using the 1080 Ti for the MSRP build and 1070 for the current price build, landing us at 16 minutes to render a 4K frame for the MSRP build, and 22.3 minutes for the modern build. The MSRP build completes the render with a 28% time reduction from a modern-day PC of the same $1500 price-point. This is a significant loss in performance for anyone doing CUDA 3D rendering at home. 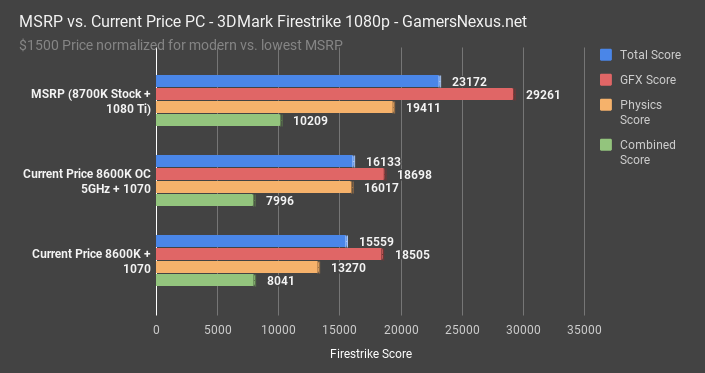 We also ran 3DMark Firestrike with its normal settings, resulting in a predictable, massive scoring advantage for the MSRP build. The 1080 Ti and 8700K, understandably, lead the 1070 and 8600K – even overclocked – by about 45%. And that’s without overclocking the 8700K.

Short of feeling bad about prices today, there’s not a lot that can be done. In the very least, this content highlights what many of us already knew: Buying a video card today, and likely RAM, is bad value. Try and wait for cards as they restock, as purchasing at scalper prices can reduce relative performance – relative to a year ago, that is – by 40-60%.